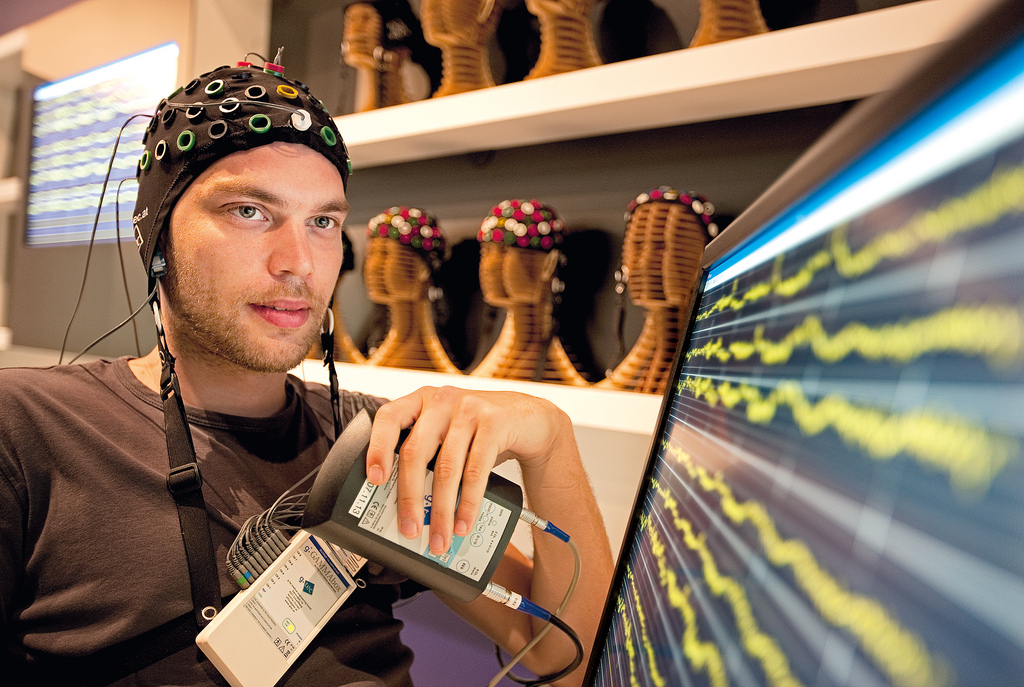 My favorite installation at the Ars Electronica Center is the BrainLab’s Brain-Computer Interface. BCI establishes a link between the human brain and a computer. It’s similar to an electroencephalogram (EEG), a measurement of the brain’s electrical activity. You put on a special cap studded with electrodes hooked up to cables, and they transmit the activities of individual areas of the brain to a computer.

One interesting experiment is SSVEP (steady state visually evoked potentials), which involves lights blinking at set frequencies. Electrodes measure the brain’s reaction and make it visible, and the reaction can then be used to control the movements of a six-legged robot. Our brain processes millions of images a day. When we concentrate on something—a blinking light, for instance—nerve cells in the brain emit various signals, and do so in the same rhythm as the blinking light. This is what makes it possible to control a robot. Each one of the various directional buttons on a remote control unit blinks with a different frequency; when we concentrate on one direction, the signals emitted by our nerve cells emulate the pattern of the light. The computer recognizes the signal and executes the movement with the robot.

I find it fascinating to be able to steer a machine with my thoughts. To say nothing of what this implies in the medical field—for example, for people with handicaps—or for toys you can control by thinking. And this turns out to be an interesting approach to Ars Electronica’s philosophy, which ultimately has to do with human-machine interaction in the context of state-of-the-art technology.

More info about the BCI 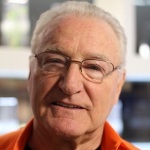 In the early 1970s, Karl Federspiel, whose training was in industrial management, received an assignment to set up an EDP system. From then until his retirement, he managed an electronic data processing firm. But Karl considered himself much too young for the laid-back life of a pensioner, so in 1999 he took a part-time job as an Infotrainer at the Ars Electronica Center. He really enjoys the personal contact with visitors and co-workers, but he also likes keeping his finger on the pulse of leading-edge technological developments.