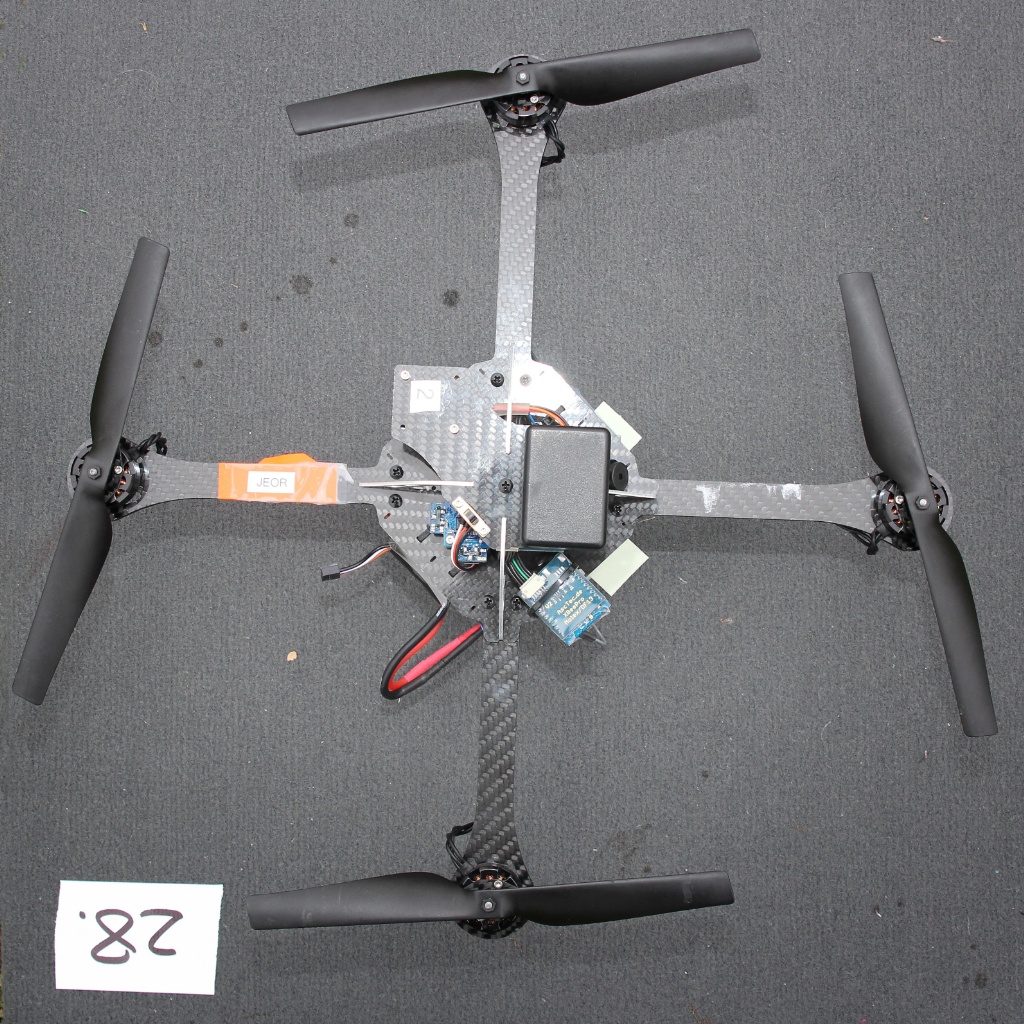 The quadcopters are back in European airspace! Needless to say, innovation and testing have been going full speed ahead (and even a notch or two beyond) since the 2012 voestalpine Klangwolke. After all, the performance in Linz was just the beginning of the spaxels, a proof-of-concept as it were—though it did have what it takes to set a world record as the largest outdoor quadcopter formation flight.

Thanks to the global sensation the quadcopters launched online, the next big milestone show is set for Saturday night. Paramount Pictures has booked a spaxel flight to create some big-time buzz for “Star Trek – Into Darkness,” the next episode in the relaunch of the great Star Trek film series. In cooperation with the WWF, spaxels will highlight the start and finish of Earth Hour by forming a Star Trek logo in London’s night sky in the vicinity of Tower Bridge. Why London, you might ask? Well, we’ll spare you the spoiler. For now, let’s just say: you’ll find out when you see the flick.

You’re only reading about it now because everything was hush-hush before the big event. What follows is a travel diary. And since the quadcopters couldn’t make the trip from Linz across the Channel to England’s capital under their own power (or because there just wasn’t enough time for such a flight), the first log entry is the account of a bus trip.

But wait a minute. This journey actually ought to begin with an explanation of what a spaxel is! “At first, I didn’t even take them seriously,” said Daniel Gurda of Ascending Technologies, the Munich manufacturer of the Hummingbird, a remote-controlled, four-rotor mini-whirlybird also commonly known as a quadcopter, quadrocopter or drone. Nevertheless, these spaxels aren’t standard model Hummingbirds; customized software makes the flight characteristics of these babies considerably more stable than their off-the-shelf siblings; “to use the Hummingsbirds as pixels in an aerial 3D-Screen just seemed too crazy.”

The finding and insights of Futurelab engineers have gone into the development process that has made these quadcopters the top-of-the-line of drone aviation.

But what’s the Futurelab actually developing now? Aren’t these birds ready for takeoff already? Here too, the software is the key. The mission is to enable the Hummingbirds to create a formation—a logo, a symbol, an entire choreographed show—as precisely as possible.

It works like this: designers write a 3-D program that specifies a sequence of movements—shapes, animated images, a series of forms. Essentially, it’s produced just like an animated film, except that the pixels aren’t tiny points on a screen but rather illuminated physical devices hovering aloft.

The challenge is to translate the data into flight coordinates. To accomplish this, a computer processor gives the sequence of the choreographed movements and the spaxels report their positions via GPS and LPM (more about this in the next blog entry). And they do that very frequently, since the flight paths have to be executed with utmost precision. Wind and weather exert a big influence on flight patterns, so it’s essential to constantly monitor and correct the spaxels’ absolute position above ground as well as their position relative to each other.

And this is the masterly technical feat achieved by the Futurelab’s staff—actually rendering finely detailed patterns, and doing so outdoors. This is a challenge that few have faced, and far fewer have met even halfway successfully. 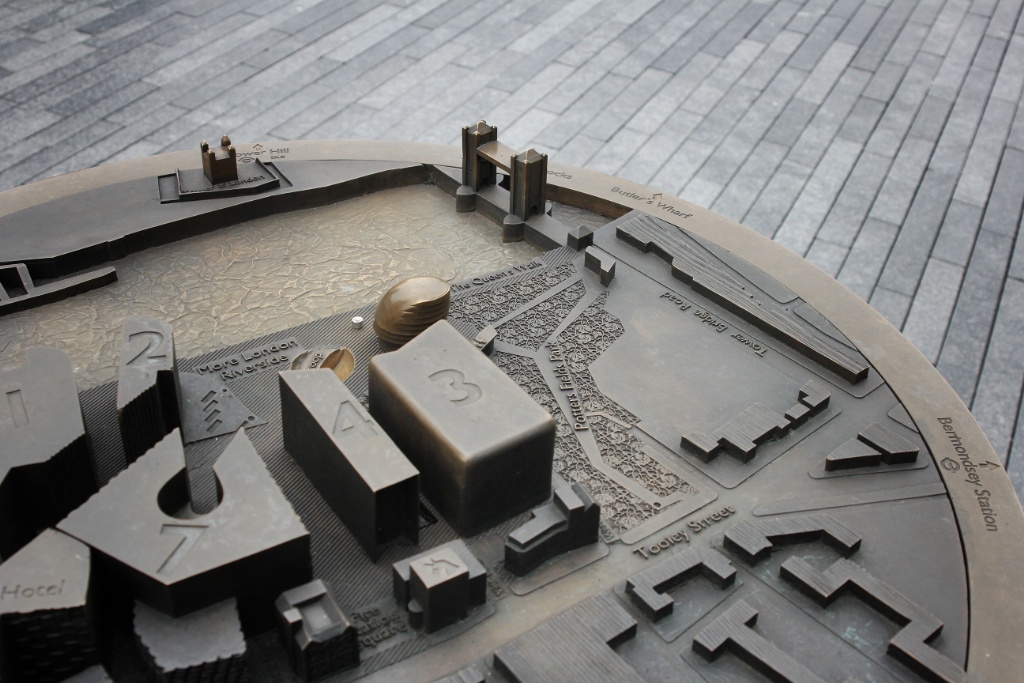 So now that everybody’s clued in about quadcopters, the journey—our long-promised bus trip—can commence. Well, let’s put it this way: it went uneventfully, and the crew and their Hummingbirds arrived in London intact. There, the first item on the agenda was an in-person inspection of the site where the quadcopters would take off. The verdict: fantastic! The advance word had been that the location was right on the river, immediately adjacent to the Tower Bridge, good visibility, in the heart of London. But it turned out to not be like the hyperbole-puffed text in a brochure for some dodgy hotel: the takeoff area actually was a stone’s throw from the Thames, and if the sun ever came out in England, the Tower Bridge would literally cast a shadow on the spaxels. The crew was tickled pink!

It’s been already mentioned that the Tower Bridge is not far off, right? 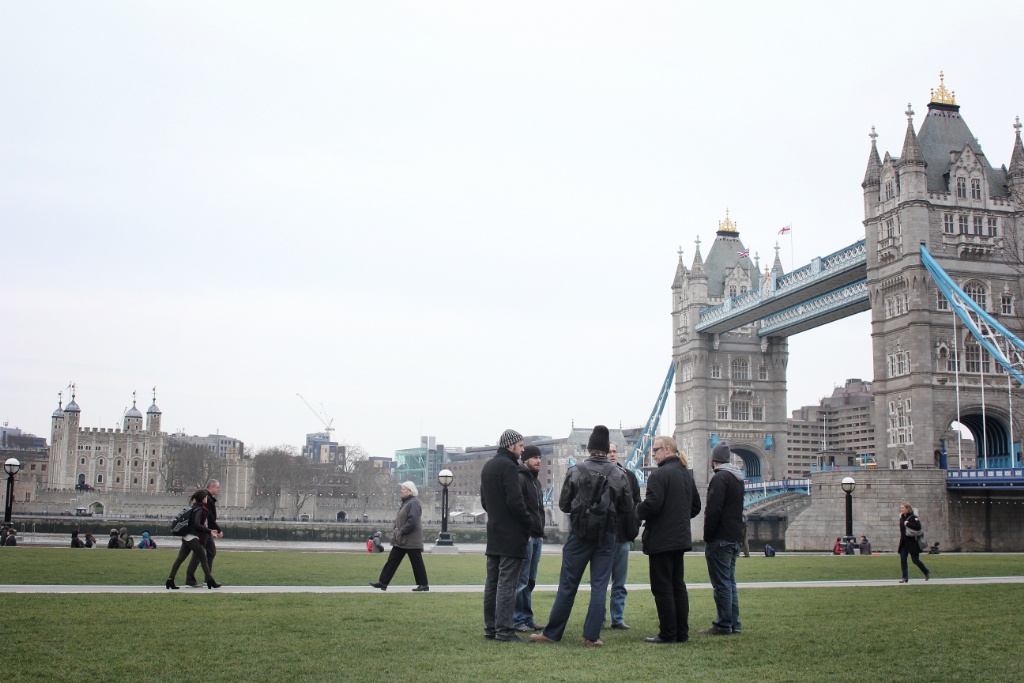 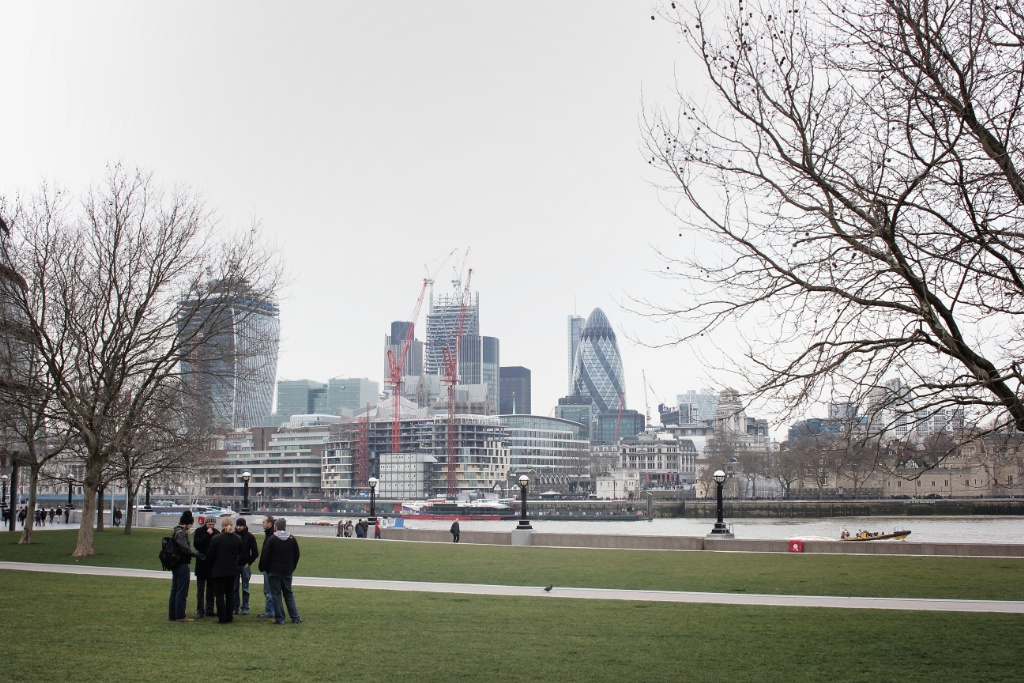 Location-Check: Done! Next up: Food! 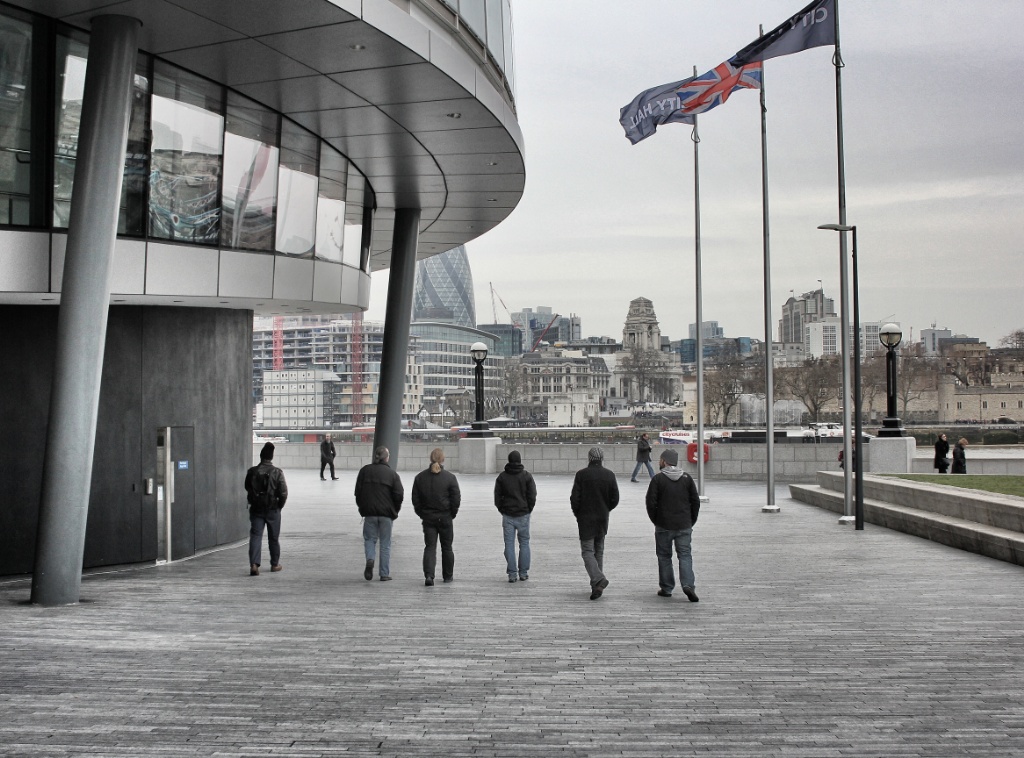 The next piece of good news arrived that same evening: Daniel Gurda and Jan Stumpf from Ascending Technologies showed up with new software that helps to even further improve the Hummingsbirds’ stability aloft. So there are two brains inside each one of these wondrous pieces of equipment. One was developed by the Futurelab, and its job is, so to speak, the creative aspect of the flight, the so-called high-level operations including communication with the server, the color changes by the LED lights, the navigation, etc. The second processing unit was set up by Daniel and his buddies at Astec; it enables the quadcopters to execute their aerial maneuvers and thus controls the low-level operations that keep the Hummingbirds on course.

The Hummingbird in all it’s glory!

The Munich-based enterprise’s R&D staff was hard at work over the last few weeks in a concerted effort to even further enhance the quadcopters’ performance. The latest tweaks include removing a few software routines that are very practical in the case of manual or semi-manual flight but aren’t at all helpful when it come to formation flight.

The two processing units work together closely and interdependently. You could compare it to driving a car—the brain issues the orders; the hands and feet are responsible for carrying them out.

The development process itself has been a tandem flight. Ascending Technologies made the developer kit available to the Futurelab, and prior to the London show, developers from both partners spent four days together in Munich. Completely isolated from the outside world, they optimized operations, eliminated errors, and made considerable progress upgrading the software.

Last modification are performed on the quadros. 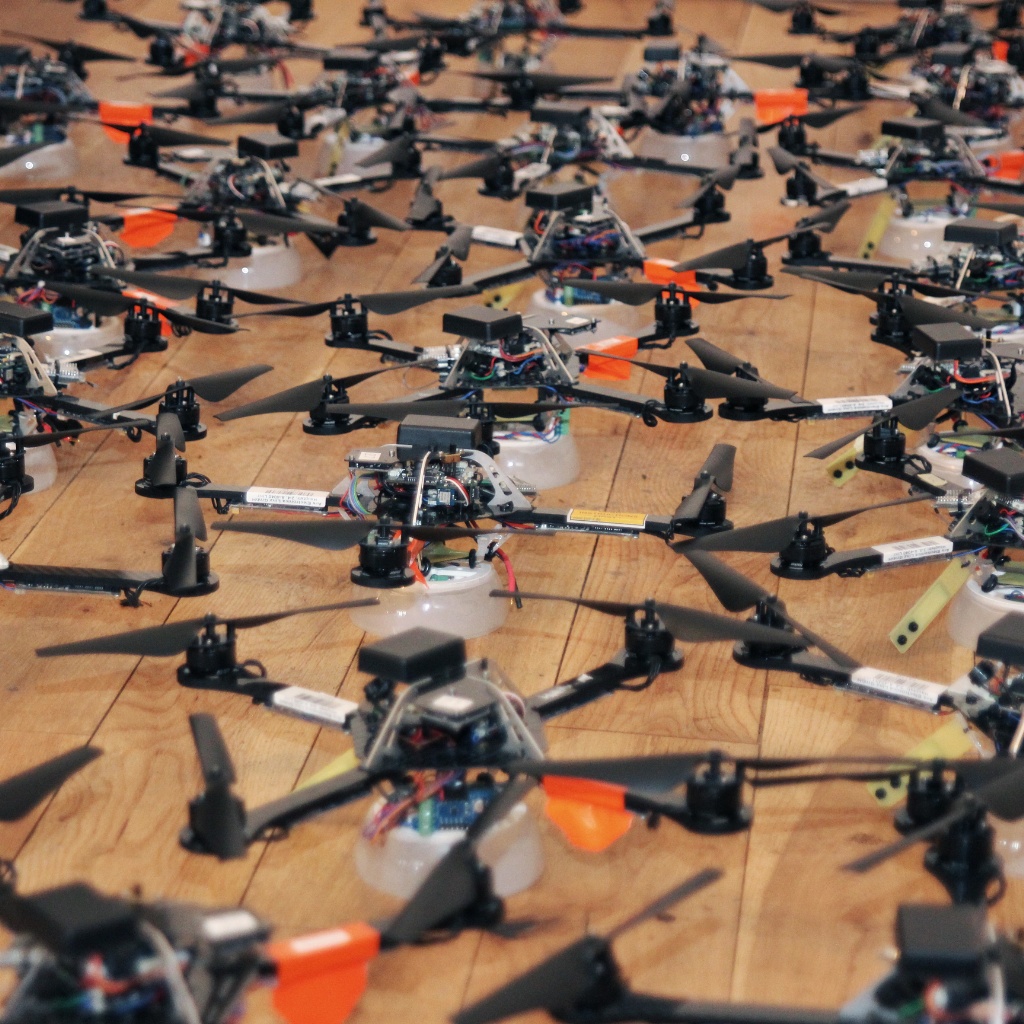 The quadcopters were flashed with the new firmware, enhanced and prepped to take off on their final test flights. Now, the only potential hindrance is weather that’s simply too nasty. The whole production crew assembles for a banquet. The combined Futurelab & Ascending crew is looking forward to the day leading up to the main event.

Every Hummingbird has it’s own spot. 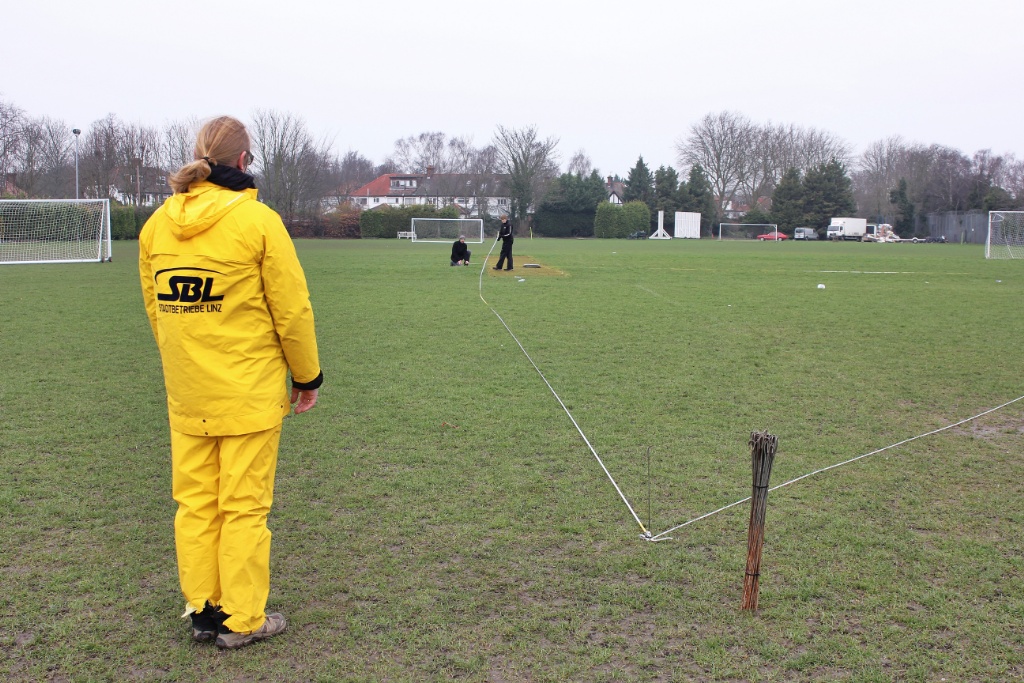 The weather is English: moderately dry and windy. The test flights begin with the takeoff of one of the Hummingbirds, Renly, to find out how strongly the gusts affect the flight path of the quadcopters. And once again the news is good: the performance is excellent, even at a wind speed of 30 km/h and much more. Only the battery output is slightly subpar, so the software modifications are really paying dividends now. 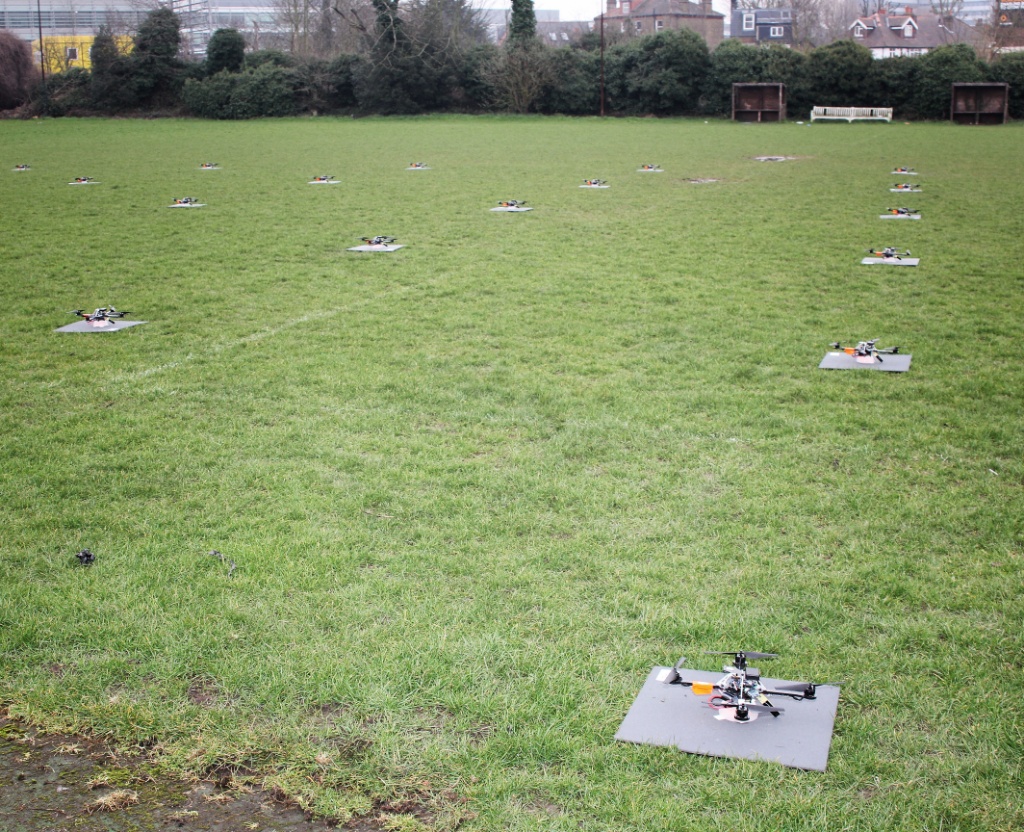 To make things a bit easier, a few modifications are carried out on the quadcopters as well as the lighting unit on each one. The transparent hemisphere that protects the LEDs is replaced by a truncated cap, and the landing struts are removed, which means that the Hummingbirds will be lying on their belly when they take off. All of this improves the aerodynamics by giving the wind as little opportunity as possible to get into the act. The batteries breathe a sigh of relief. 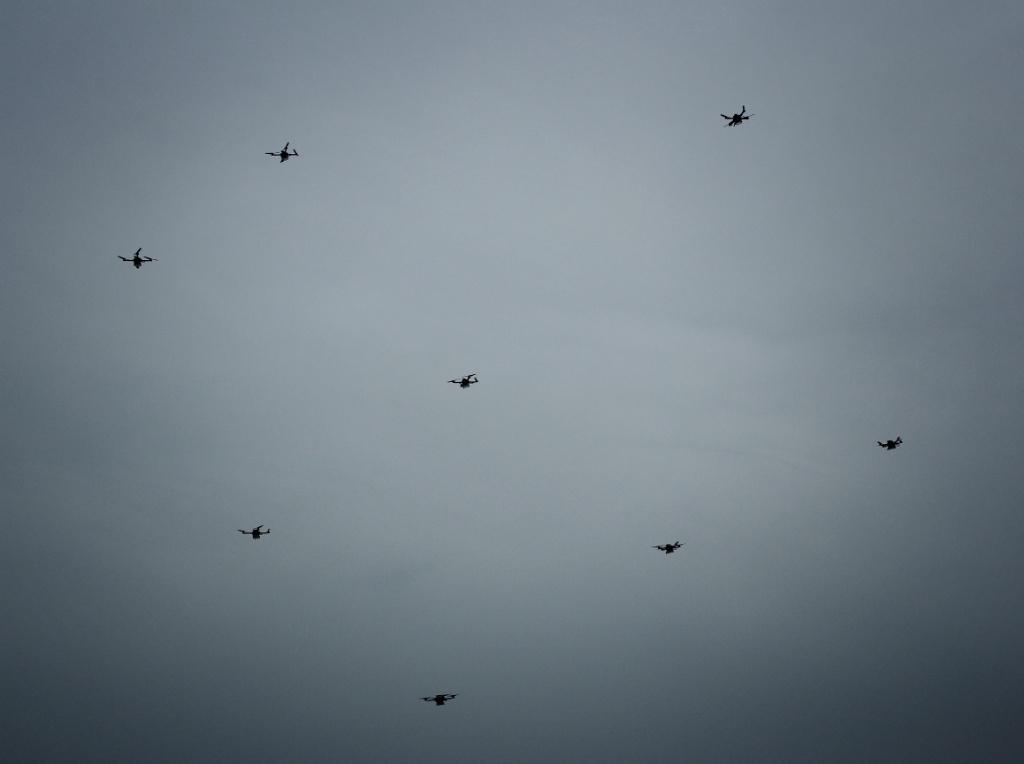 Back at the hotel that evening, the day’s test flights are evaluated. Under extreme conditions, the Hummingsbirds came through with flying colors. Confidence prevails, since the forecast is for the wind to subside before the show goes on.

It is warm and sunny… 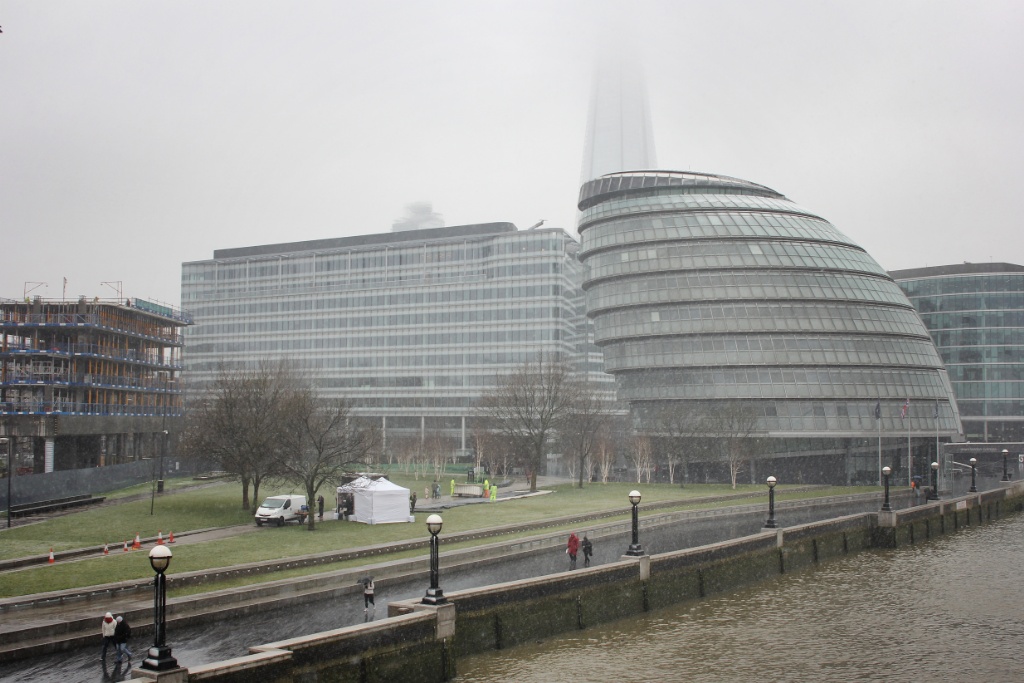 Saturday, the big day, the time to put up or shut up, begins with a shock: it’s snowing. It’s late March in London and even the locals are visibly taken aback. Light rain doesn’t exactly facilitate flying, and snow’s even worse. The communication between the server and the quadcopters is adversely affected; the GPS positioning becomes less accurate; the flight conditions are riskier. Some consolation is provided by a weather forecast calling for the precipitation to taper off and the wind to diminish by evening. But the crew is facing a long, chilly day posing a challenge to body and mind. The preparations have to be carried out with the utmost precision. This show demands supreme concentration by everyone involved. 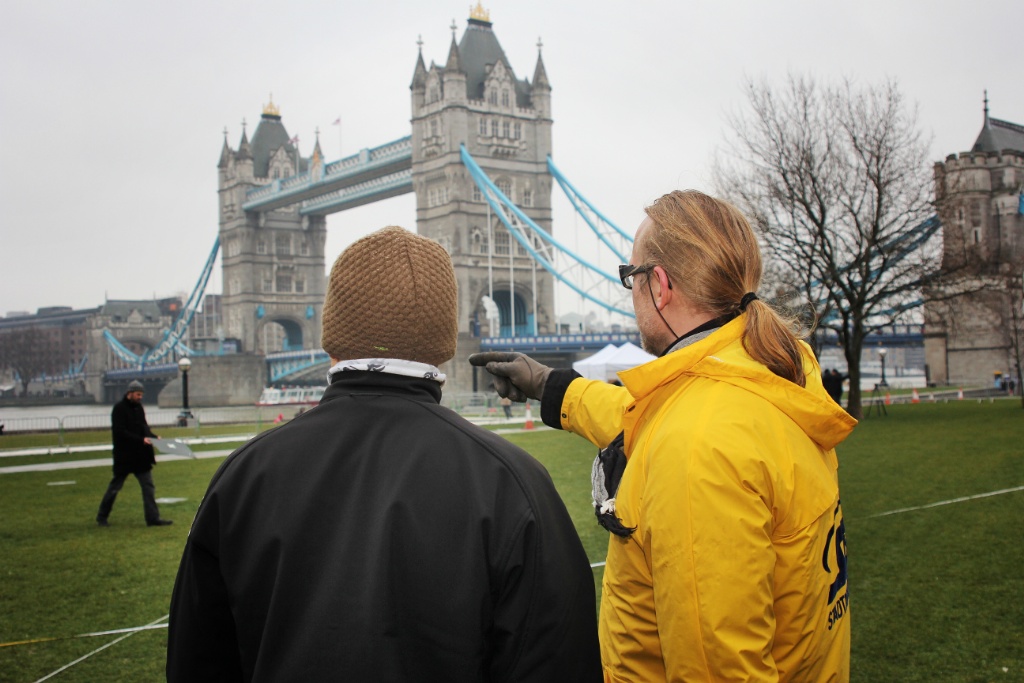 The start grid is adjusted to the facts & circumstances on the ground. The park from which the quadcopters will be taking off isn’t big enough to accommodate the regular starting formation, but that’s no big deal. The Hummingsbirds get a final adjustment: a shipment of harder rotor blades flown in from Munich to improve the flight characteristics ever so slightly.

Once they’re installed, all that’s left to do is to wait. On one hand, the snowflakes persist in playing the party-pooper role; on the other hand, construction work is in progress on the neighboring parcel, and safety considerations dictate waiting for the all-clear.

One last item is added to the spaxel checklist: set up patio heaters. Oh, to be in England before April’s there (as Robert Browning might have said)! We’re all chilled to the bone; tea and other liquid refreshments are used to banish the cold.
Finally, the snow lets up. The test flights can begin. Each Hummingbird is individually checked to make sure all modifications and adjustments were done properly. 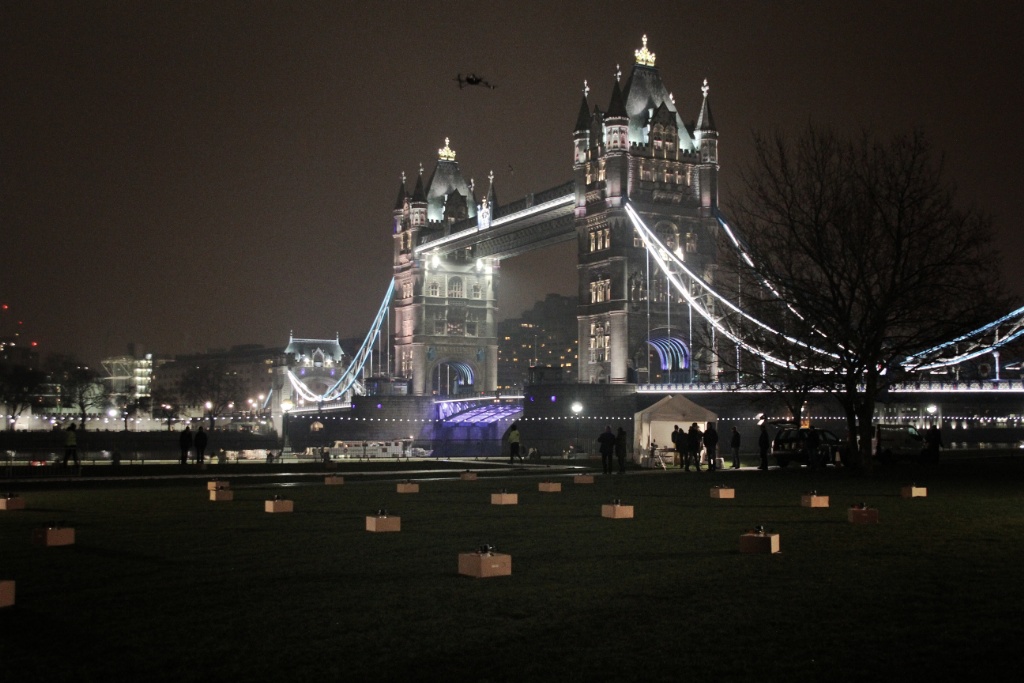 At 7 PM, the preparations are in the home stretch. The weather is good—the Brits might call it spring-like. The reconnaissance drone ascends to measure wind speed and direction at the altitude at which the quadcopters will be performing. Its flight behavior makes it possible to draw conclusions that are essential for planning the series of maneuvers that make up the show. Good news: everything’s A-OK. Green lights across the board. All systems are GO! 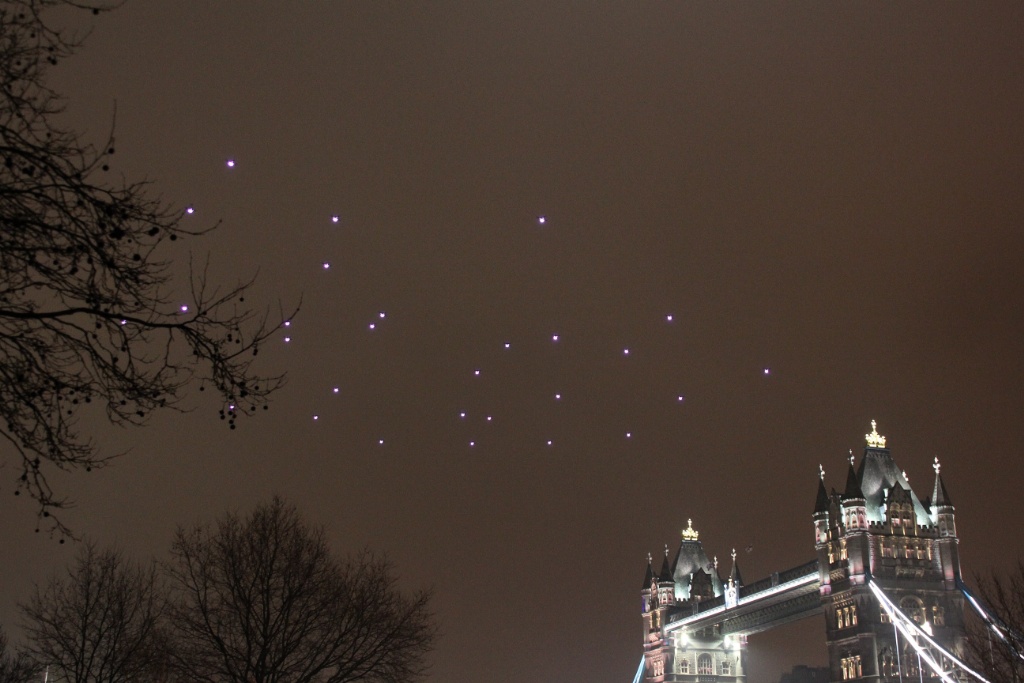 It’s 8:15 pm, and the show is about to start: All quadrocopters are set up and switched on, they can’t wait for the signal to take off, and that goes for the crew as well. The Hummingsbirds lift off into the sky according to plan, the rise up to their positions, they light up, and then it’s there: A gigantic version of the Star Fleet – Emblem flies right next to the Tower Bridge, overpowering the river Themse and drawing eyes from all of London. When the Paramount’s camera-crew is asked via cb wheter they got the shot and the answer is yes, the crew and crowd goes crazy. Euphoria, pride, knowing to have delivered an excellent performance, all those feelings create a beautiful cocktail of emotions. But enough words, see for yourself what you’ve missed:

En route to the final formation 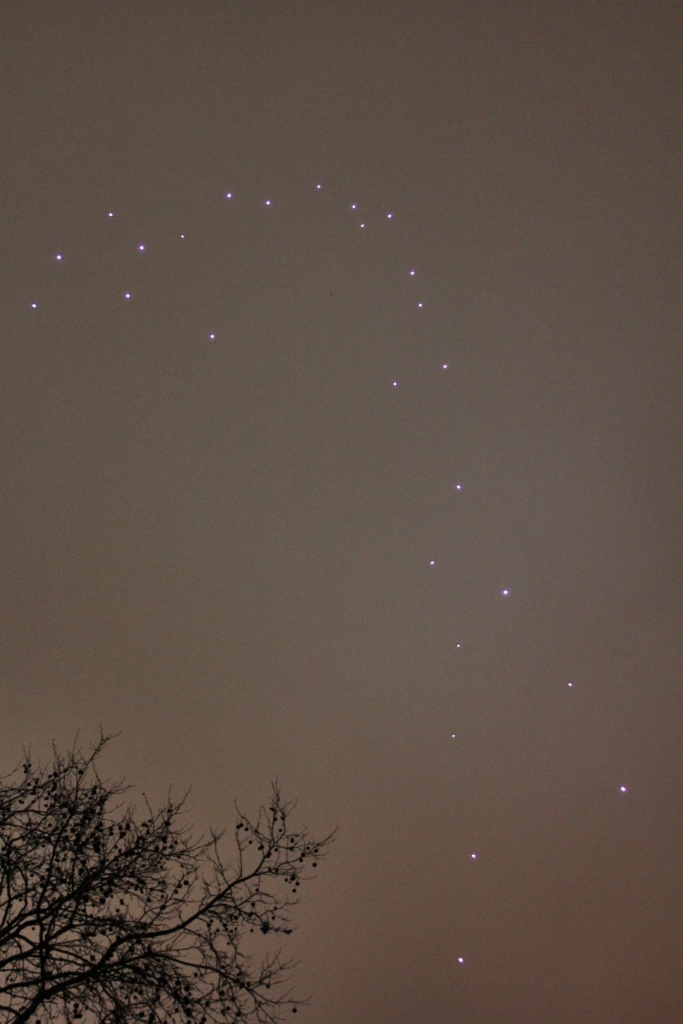 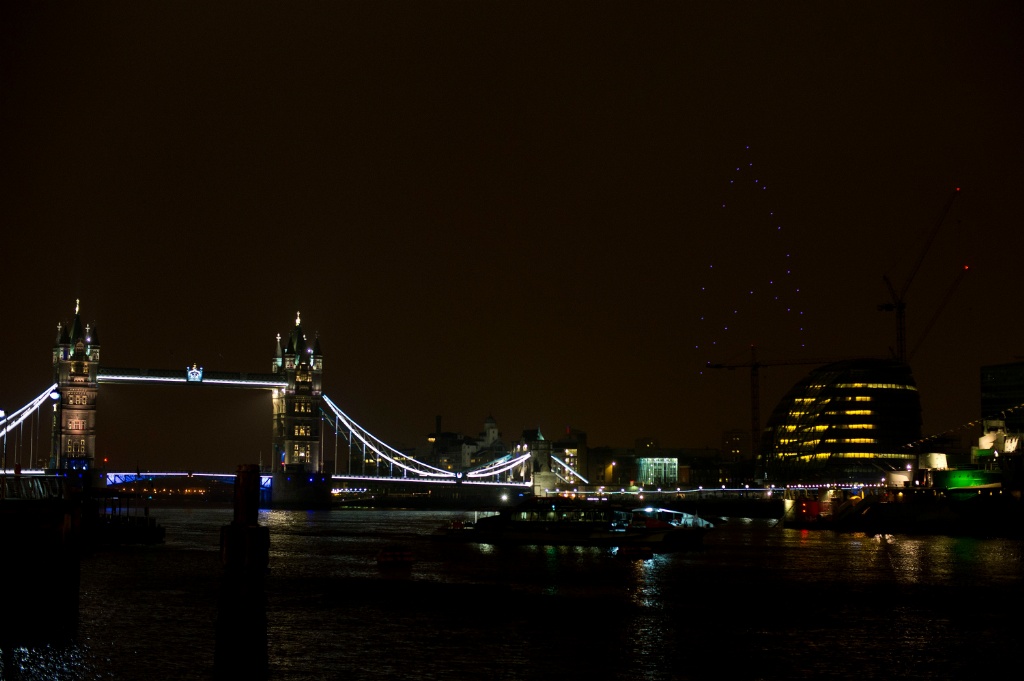 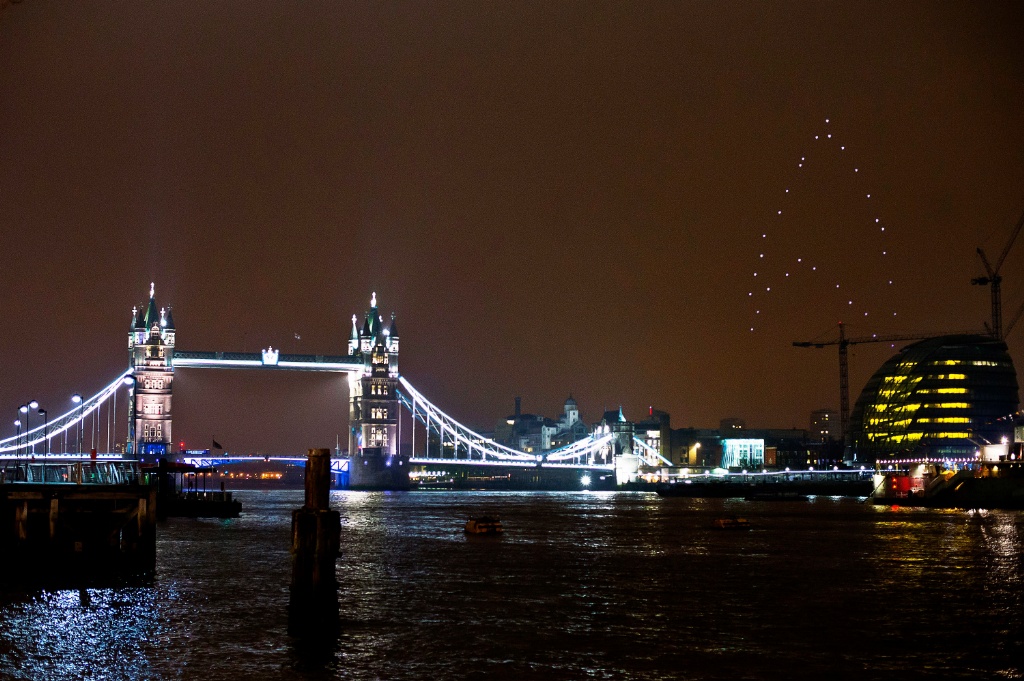 Shiny, happy people! The quadcopter-team was visited by people of Ars Electronica, you don’t want to miss out on a show like this. 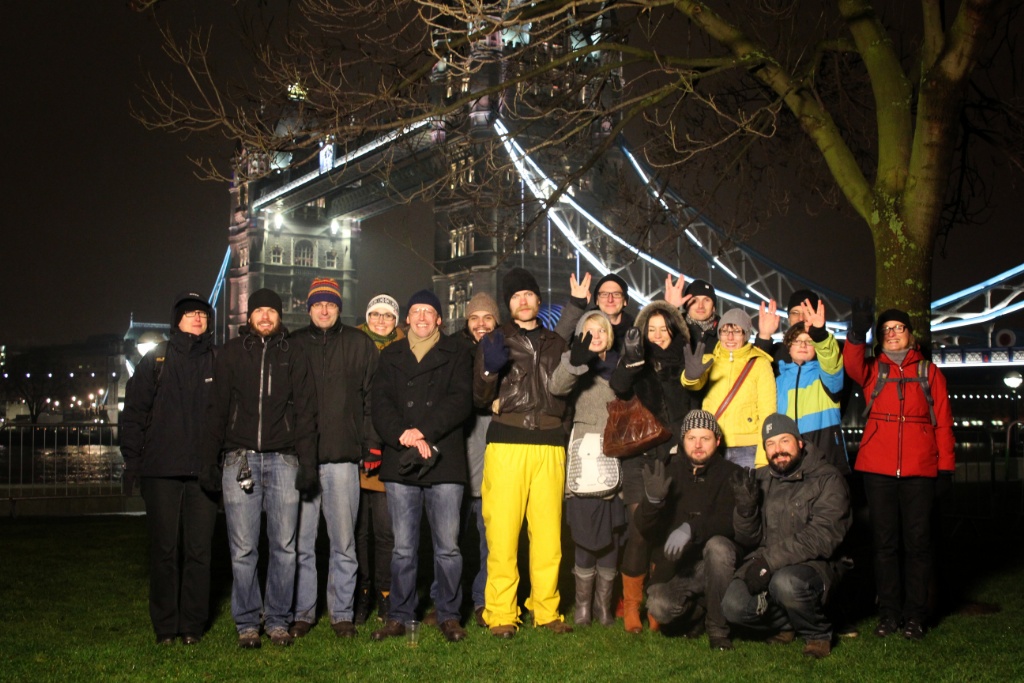 A great way to come back to the Futurelab! 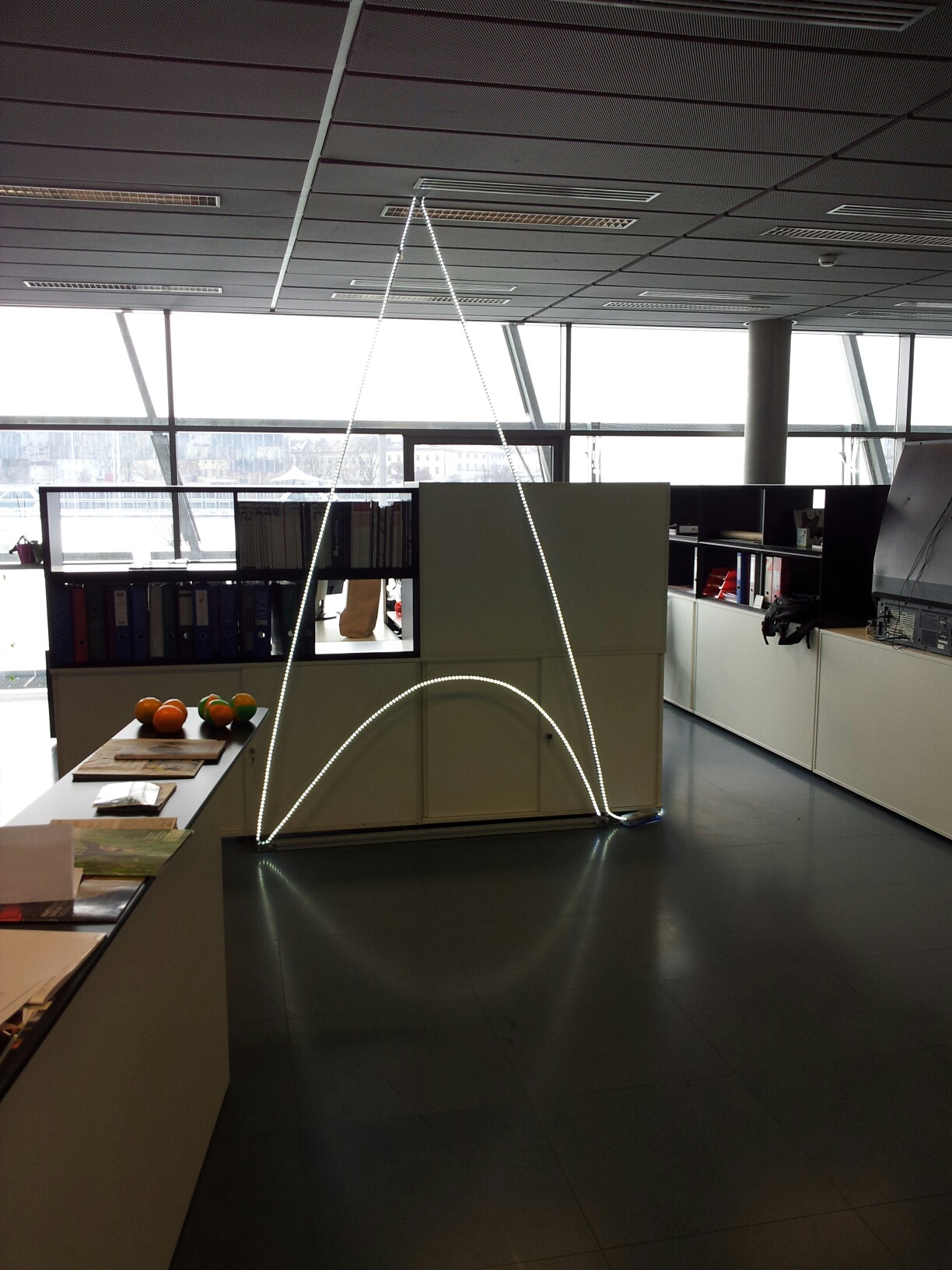 Now, if you want to have a similar show for say your birthday-party, head to the website of Ars Electronica Solutions.