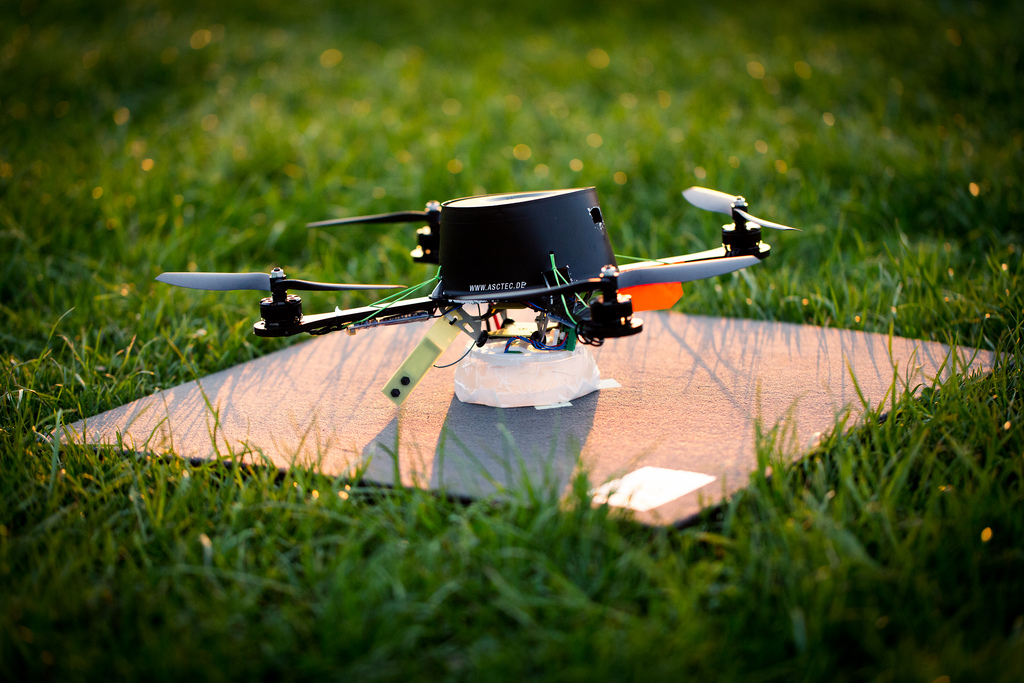 In London, the spaxels were used for promotional purposes. The Ars Electronica Futurelab received a specific assignment and successfully carried it out. But as the voestalpine Klangwolke brilliantly demonstrated, the quadcopters can take to the air in an artistic role too. We recently had a chance to chat with Sven Beyer, artistic director of phase 7, an indie artists’ collective in Berlin. Our subject: “Murmuration,” a multimedia piece conceived especially for the opening of the Bergen International Festival in Norway May 22-23, 2013. In our interview, Sven gave us some background. 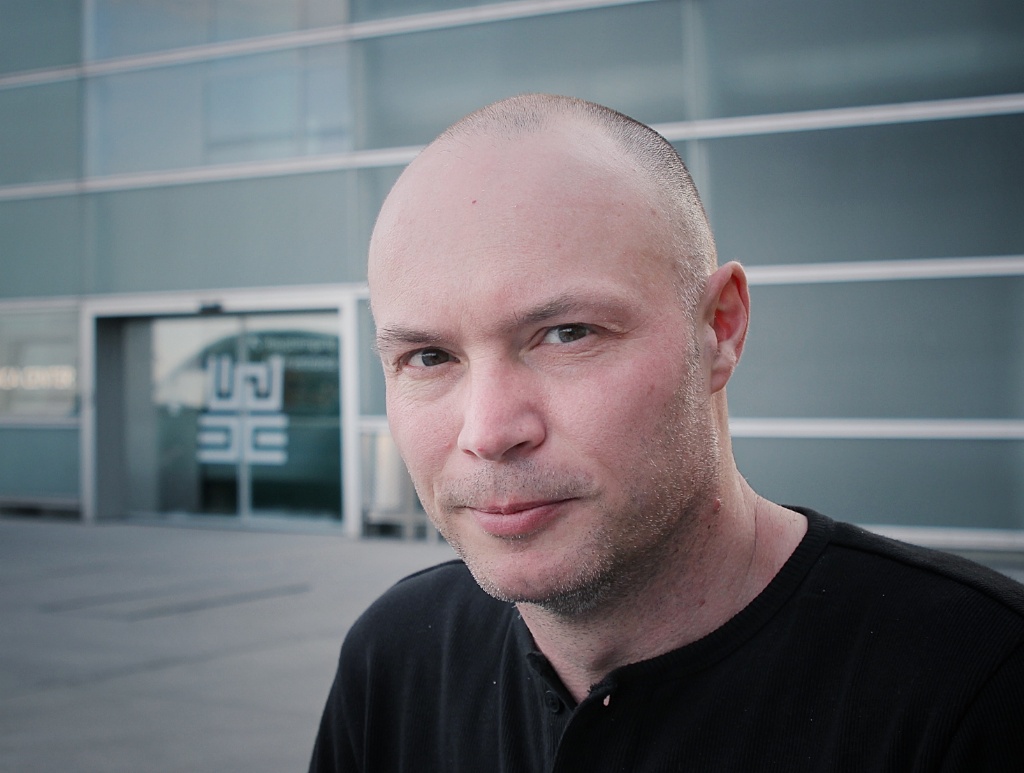 How did your collaboration with Ars Electronica come about?

Sven Beyer: I was actually here when the spaxels were gearing up for the Klangwolke. I was walking along the riverbank during a rehearsal, and I thought to myself: “Wow, cool light sculpture. But where are the cables?” Then, as I got closer I realized what was actually happening. I found the idea really impressive, and the production was aesthetically excellent. At Phase 7, we’re really into high-tech, and this was something that was very technically innovative while still being capable of creating an emotional affinity despite being a piece of technology.

I’m always fascinated by what technology evokes on the emotional level. Although this would seem to be totally devoid of an emotional component—after all, we’re talking about a bunch of machines flying around—but it happens nonetheless that people are touched by these patterns. Patters are also something we’re forever dealing with in our artistic work. They’re always emerging somewhere, a part of a whole. One can call it divine or inspiration; I always see lots of parallels here. This begins in the microcosm, in biology, with microbes, or even on a smaller scale with models of atomic particles. If you look further, you rediscover them in whirlpools, in our everyday life, when earth becomes parched in the desert. I was once in the Hubble Control Room, and the images one encounters there reminded me of patterns. That was a galaxy, or several galaxies, parts of which were colliding with one another. Fantastic visual material was made available to me. I found this totally fascinating.

And then I see these patterns again in a cloud formation, and that’s the crazy thing—that this is widely perceived as beautiful or artistic, though it might not be anything of the sort, and, instead, simply the product of a natural process. Perhaps this is what many people perceive as divine, or what could also be explained in terms of physics—that we ourselves are part of the whole, that we consist of water too and thus are also subject to the formations that coalesce in water.

After all, we’re physical beings. Music is a product of physics and harmonic sequences. This wasn’t a human invention; this simply occurred. It’s funny to consider that birds too sing notes. That’s what I mean with patterns.

This can be applied quite extensively. And the crazy thing about it is that it triggers something on the part of people. And that’s what fascinated me about the quadcopters. And this is also a perfect fit for the opening in Bergen, Norway, because it takes place on the bank of a large lake, so I’m absolutely sure there’s going to be a beautiful reflection in the water there as well.

So you’re saying that Phase 7 had already conceived a show and the spaxels are part of it.

Sven Beyer: Exactly. This is an opera music project. We were originally asked if we wanted to stage our other project at the festival, Neither, an opera featuring wave-field synthesis with 80 loudspeakers. The festival producers had heard that we also stage large-scale spectacles for major events like openings, and we were commissioned to come up with ideas. Since I had been at the show in Linz two weeks prior to this meeting, it naturally occurred to me to integrate the spaxels. They’re part of a 45-minute production that includes some of our musicians performing on stage. The music is a new composition that develops in the electronic direction. Of course, it’s derived from the idea of various types of swarms. There’s a big LED video box. The music also has classical elements. There are local dancers from Bergen. There’s a chorus of 200 children and young people. They’re all part of the staged performance. And the grand finale is the quadcopter formation. So this production will mark the opening of the Bergen International Festival that includes 230 different events put on over the course of two weeks.

The overall theme is Murmuration, which refers to flocks of starlings darting about in formation. These parallels to nature are really fascinating. What I only just found out is that starlings create these formations when they’re being pursued by a falcon; it’s a kind of defensive strategy. In any case, the theme is swarm behavior, something that’s extremely widespread in nature—for instance, among fish and insects, as well as birds.

And human beings do the same thing. Consider a major street in a big city; what transpires there is somewhat similar. Some research has been done on this, though it doesn’t have to do only with movement but also with social networks. Looking at this statistically makes it clear that this is classic swarm behavior—beginning with so-called superspreaders, a term used in medicine for initial points of propagation such as a physician who inadvertently infects 100 people. The same principle applies to social networks.

So you’re saying that the quadcopters and their flight behavior did indeed inspire the content.

Sven Beyer: Absolutely. There are many parallels. And even beyond this, technology is in most instances a reflection of nature.

What kind of technology is being deployed in Bergen?

Sven Beyer: First off, there’s a whole musical group, seven musicians on stage, one of whom is a live video artist. We’ve built a laser harp that’s being used for the first time. And we want a quadcopter to play the laser harp.

What in the world is a laser harp?

Sven Beyer: It’s a fan-shaped configuration of laser beams. Jean-Michel Jarre already built one, though most of them have simply been sound storage devices. We’re using a camera system so that the harp can be used as a MIDI controller. Wherever a person’s hand—or a quadcopter for that matter—touches a laser beam, this produces a point of light that is registered.

A signature element of a Phase 7 piece is interactive dance in which we use ASUS cameras, sort of as Kinect counterparts. We track a small area in which a dancer is moving and influencing particle systems—whereby the swarm theme once again plays a role here. We want to make possible a wide variety of chains of association—people, cars, nature of course. And then there’s also something heartrending evoked by the children’s chorus. In any case, this brings Scandinavian people almost to the point of tears. The grand finale featuring the quadcopters is most sublime as well, though at the very end it’ll be mixed with dubstep beats. 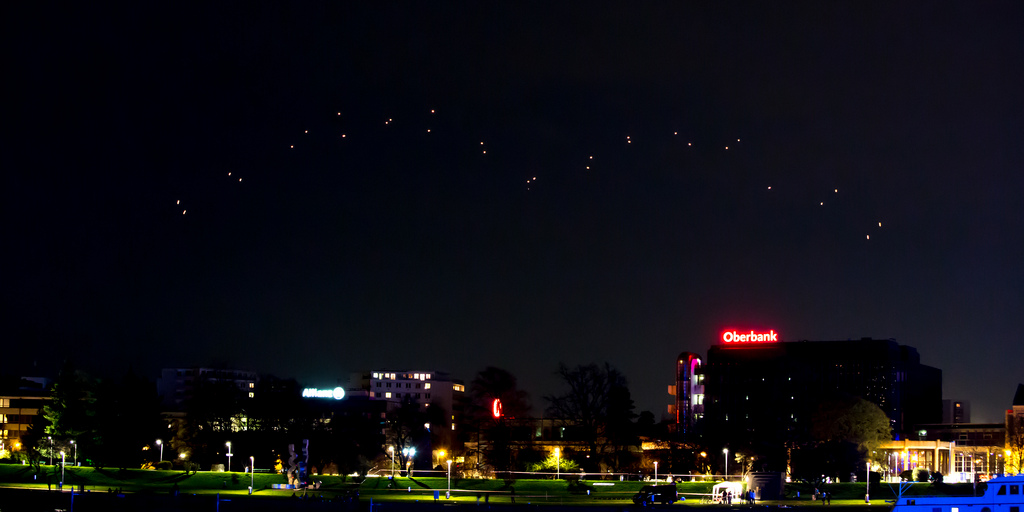 The audience is highly diverse, the whole spectrum of age groups is in attendance. And the point of this is also to do something special for the people of Bergen, just like Linz does with the Klangwolke. This is another reason why we wanted to integrate locals into the production—for example, the young people who are part of the show. By the way, the quality of the choral music is truly impressive. Lots of people play music at home there, and receive basic musical instruction in a family setting. We already got experience staging a production with a chorus of a thousand singers in Stavanger, and it was amazing how polished and professional they were. They even held their own with very complicated rhythms. And as a result of this positive experience, we decided to work with an amateur chorus once again.

Our aim with the quadcopters is to create what might be called alter egos of the seven musicians on stage. Seven spaxels fly directly above the musicians, for the first time in a sort of sine wave. The whole piece begins with a quadcopter, not with a person; it’s the main protagonist, so to speak. It’s brought to life. The Futurelab enhances it with a couple of LEDs. Via sound design, there are noises like the ones that would be made if it were awakening. Then it’s alive, so to speak.

Next come the musicians, each with a quadcopter above his head, which gets you playing with the human-machine connection idea. And then the absolute climax is the flying formation. Of course, all of this is interlaced with the music. We’re currently planning a passage lasting about eight minutes, which, needless to say, is dictated by the quadcopters’ battery life. But I’ve always held the opinion that you shouldn’t get carried away with a special effect. There’s this quote from Anton Chekhov: “Brevity is the sister of talent.” And there’s a lot to this. After having seen a lot of theatrical productions that simply run on too long, you have consider, particularly with special effects, whether it’s necessary to repeat something or if you should get to the point.

The piece ends with the formation. We leave it as a question; we’re not trying to impart a conclusion. We actually do conclude with beauty. This is sure to be fantastic: big chorus, orchestral tones, live musicians really getting down on stage. The upshot is a pretty emotional moment.

We’ll be providing comprehensive coverage of the trip to Norway along with videos and photos. So if you can’t make the journey up north to the show, stay tuned to the Ars Electronica Blog for an entertaining account.