“Integration concerns every one of us”: The 3rd Helpers Conference in Linz 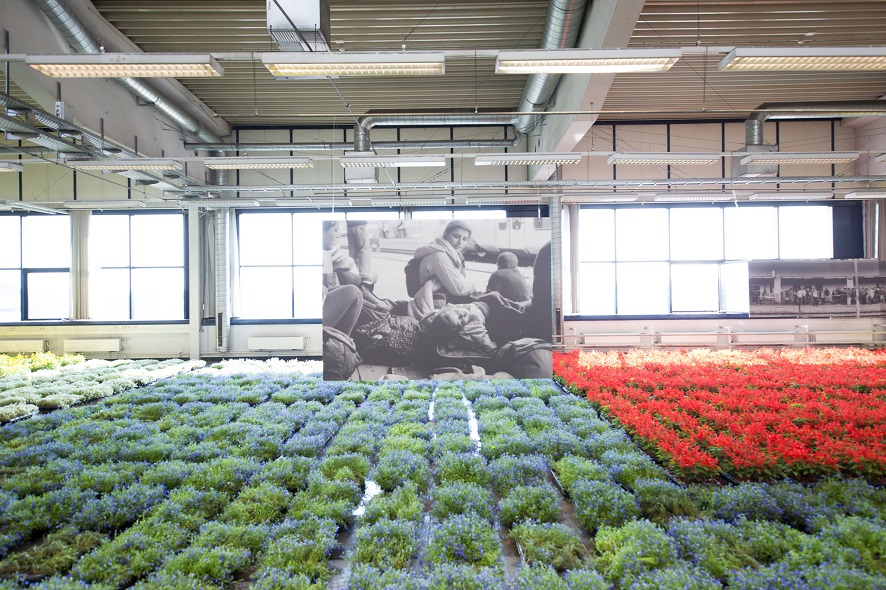 This is the third time that volunteers are getting together for a Helpers Conference organized by ZusammenHelfen in Oberösterreich to exchange information and ideas, to provide mutual support, and to learn from one another. The last two years, helpers throughout Upper Austria and beyond traveled to Linz to spend a day discussing key issues having to do with aiding refugees. Again in 2017, ZusammenHelfen in Oberösterreich, the go-to source of expertise about refugees at the Independent Province Volunteer Center (ULF), is organizing the Helpers Conference at the Ars Electronica Festival as a platform for committed activism.

As in prior years, the focus will be on the most pressing issues related to providing aid to refugees. This time, there are four clusters: international developments, integration, chances and media.

Activists and those interested in getting involved, volunteers and professionals, are invited to preregister for the Helpers Conference. Participation is free of charge.

We met with Nicole Sonnleitner of ZusammenHelfen in Oberösterreich to learn more about the current state of aid delivery to refugees and the program at the 3rd Helpers Conference. 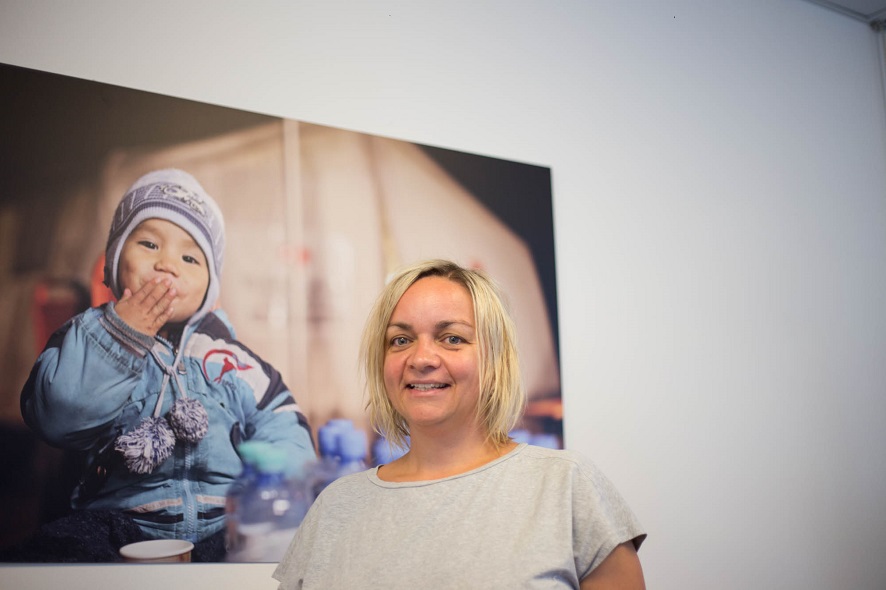 The Helpers Conference is being staged for the third time this year. Why was this event initiated?

Nicole Sonnleitner: The Helpers Conference supports volunteer activists who work with refugees. The matter of integrating refugees will persist for the foreseeable future, which is why committed volunteers are so important. Many volunteers have requested that events like this be held so they can share information with others. They really appreciate this conference and see it as support for their activism.

What topics are especially urgent now in the work you’re doing with refugees?

Nicole Sonnleitner: There are a few of them. Jobs and housing are still pressing issues. The need for housing is increasing because many people are officially being granted asylum, so they’re no longer entitled to basic social services and need a place to stay. It’s similar with the subject of work. Among volunteers, how to deal with the denial of asylum is assuming increasing importance. This is something that’s of tremendous concern to volunteers and poses a big challenge for them. How do they deal with it when someone they have accompanied for a couple of years is denied asylum and is slated for deportation? We have to provide offerings for people in this situation. 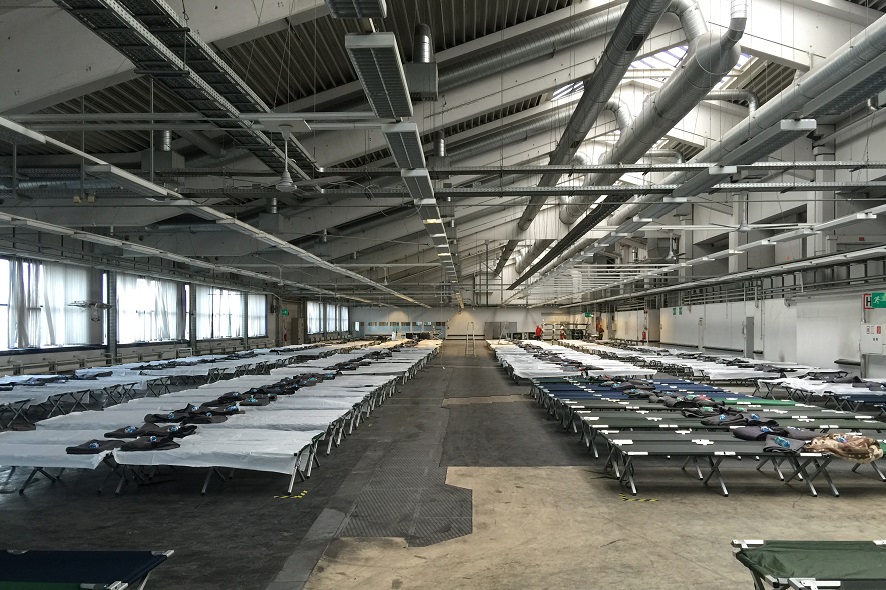 The hall in which this year’s Helpers Conference will take place was used as an emergency shelter for refugees two years ago. Credit: Karl Schmidinger

How’s the mood now among volunteers, and feeling towards them among the general public?

Nicole Sonnleitner: Basically, I have the feeling that the mood hasn’t changed much. There are still a lot of very committed people. Nevertheless, we’re noticing that some volunteers are hitting the wall. They’ve maintained their commitment—often at an intense level—for a considerable length of time now. This is another reason why it’s tremendously important to strengthen and support the volunteers. We’re also noticing that more people are still needed in this area. People who are active in volunteer organizations or for NGOs are seeking new volunteers.

You increasingly get the feeling that you must justify your involvement in this issue; that you have to explain why you’re so actively involved, why you’re concerned about this. This certainly also has to do with the political situation. Full-time professionals as well as volunteers have become aware of this—that you almost have to justify being active in this field.

Last year, there was a lot of criticism that much of the work that actually should be done by the state was being shifted off to volunteers. How’s the situation in Upper Austria?

Nicole Sonnleitner: I have the feeling that very many structures are being set up, especially in Upper Austria. No doubt, this is primarily attributable to Rudi Anschober, our regional minister for integration. Comparable structures for volunteers rarely exist. This network that has formed in Upper Austria is also very commendable.

Of course, you also have to say that in many areas, particularly when it comes to integration and interpersonal relations, the job could never be done solely by the people who do this full-time. My motto continues to be that integration concerns every one of us. Ideally, private citizens should be involved in this too. This is a matter of configuring our future society, as it were. There are many areas that have to be covered by professionals in this field because they call for knowledge, qualifications and experience, but there’s also an area in which this work can be supported very effectively by committed volunteers. 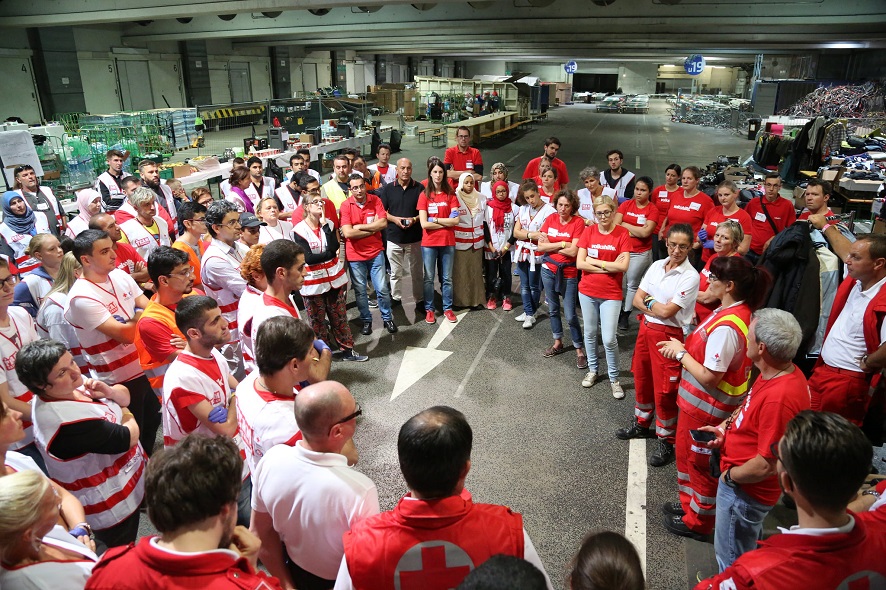 The Helpers Conference is treating four thematic clusters: international, integration, chances and media. What do you have on the programs in the individual clusters?

Nicole Sonnleitner: What we basically want to do with our themes is to take up current developments and feedback we’re getting from volunteers. I find the international cluster absolutely essential considering we’re convening in conjunction with the Ars Electronica Festival. So, this topic is meant to point out that we’re not just focusing on our own community, region or country, that international developments are important too. La Fondation Orient – Occident is a Moroccan project that we’re highlighting here. Morocco is facing numerous challenges, and we want to scrutinize how they’re dealing with them. Which approaches could bear fruit here as well? One of our speakers is Gudrun Biffl of Danube University Krems. She’s been working for many years in the field of migration, is really an expert with a broad perspective that enables her to elaborate on developments from a scholarly point of view. We want to show that there’s still more work to do on the subject of fleeing. 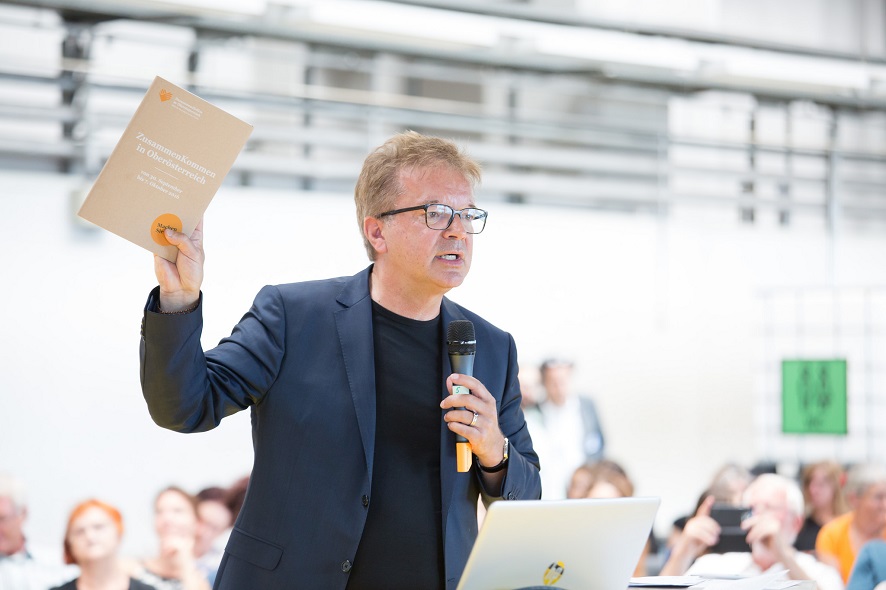 What do you have lined up in the integration cluster?

Nicole Sonnleitner: This topic will be addressed by Kenan Güngör, director of the think.difference consulting firm and research lab, who has some very interesting approaches to the subject of integration. What are the preconditions that have to be in place for refugees to achieve independence in their new country? What are the preconditions for integration? He’s accompanied numerous integration processes and we’re really enthusiastic about his approach. Upper Austria’s Minister for Integration Rudi Anschober will be one of the speakers in this cluster, and he’ll also do Q&A with the volunteers, which I think sends a positive signal—that the man in charge is ready to elaborate on policymaking and isn’t afraid to face questions.

The third cluster deals with chances.

Nicole Sonnleitner: Chances and prospects are very important in this context. This has to do, above all, with opportunities available to asylum-seekers and those who have officially been granted refugee status in Austria. Here, Josef Bauer of Wohnen mit Asyl [Living with Asylum] is presenting a best-practice example, a volunteer initiative in Wartberg ob der Aist that has done a very professional job implementing structures to assist refugees in that region with housing. A representative of Upper Austria’s school board will also be on hand, since it’s vitally important to know about educational and training opportunities, especially for young refugees. Our second guest is from the Kattunfabrik [Calico Factory], a textile mill in Lower Austria that has been making some very positive things happen producing textiles together with refugees. 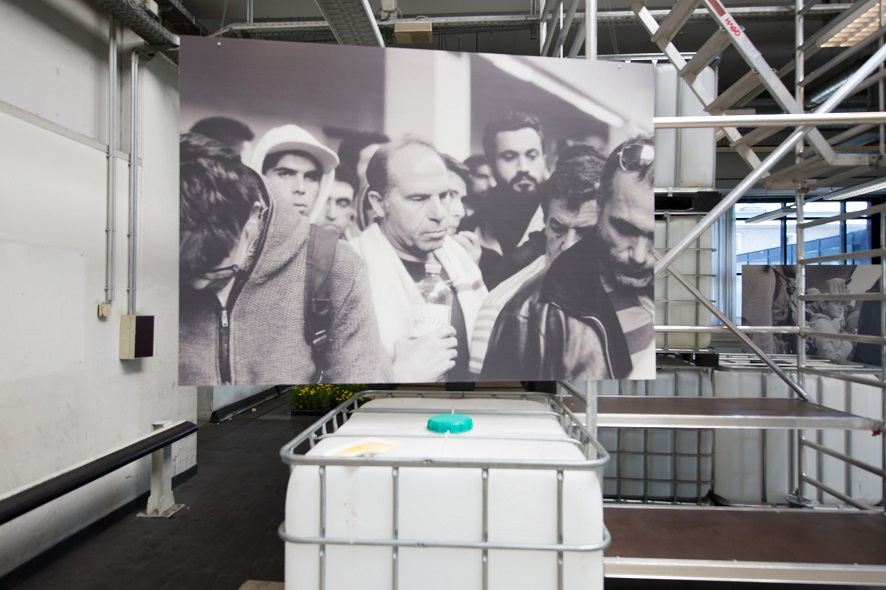 The last cluster deals with media. Why is it important to discuss this with volunteers?

Nicole Sonnleitner: Media make a big impact in conjunction with this issue. Media disseminate international and local ideas and information, and influence a society’s values. We want to show that people have to intentionally confront this phenomenon. Our guest, journalist/author Petra Ramsauer, will present her new book. Her speech will definitely be very open as well as highly realistic, since she reports direct from war zones. People like her can impart a totally different perspective to the public perception because they’ve familiarized themselves with the facts & circumstances on the ground and gotten actively involved. Philipp Etzlinger from uugot.it will demonstrate technology the IT sector has come up with and that can now be used by people working with refugees. Specifically, this has to do with a language learning tool that has been successfully deployed in pilot regions. Following his speech, there’ll be an opportunity for conference attendees to try out this technology in the ZusammenKommen Lab. 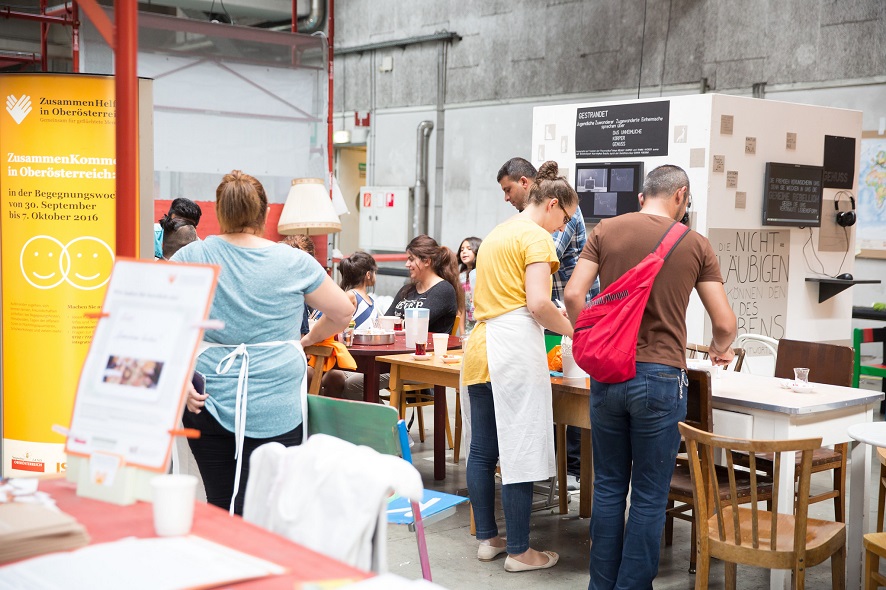 The ZusammenKommen Lab will be open throughout the festival and support the Helpers Conference on Saturday. What’s the purpose of this lab?

Nicole Sonnleitner: On the day of the conference, this ZusammenKommen Lab will be set up to take a different approach to the conference themes. This includes dealing with the issues of volunteers and fostering a process of exchange among them. A psychologist will be on hand to answer questions about traumatization and detachment as a means of self-protection by aid workers. This also provides a setting for speakers to meet & greet attendees, exchange views, and do networking.

There’ll be different events lined up on the other days. But throughout the festival, this is meant to be a setting in which to discuss future prospects and to exchange views.

The food & beverage service at the conference is being provided by SOS Menschenrechte, Über den Tellerrand Community Linz and the KAMA association …

Nicole Sonnleitner: All three groups are active in different ways helping refugees. SOS Menschenrechte [Human Rights] provides housing for asylum-seekers and also does catering with them involved. The Über den Tellerrand [Beyond Your Own Backyard] Community is a volunteer project that has also gotten involved in catering. The initiator, Beate Adams, is really setting a wonderful example with her highly committed volunteer work. The KAMA association holds workshops including cooking courses attended by asylum-seekers together with Austrians.

It’s important for us to handle the food & beverage service ourselves. We want to demonstrate how positively projects can develop, the joy people derive from taking part, and how proud they are of what they’re doing.

The 3rd Helpers Conference is being staged on September 9, 2017 by ZusammenHelfen in Oberösterreich in conjunction with the Ars Electronica Festival. Participation is free of charge. The target audience consists of volunteers and professionals supporting refugees to get integrated in the State of Upper Austria. Furthermore, asylum seekers who are performing volunteer or community service work are cordially invited to take part in this conference. You can register for the conference here. Please keep in mind that your registration is not valid until it has been officially confirmed via telephone or e-mail by ZusammenHelfen in Oberösterreich.