Future in a Nutshell: Creative Robotics 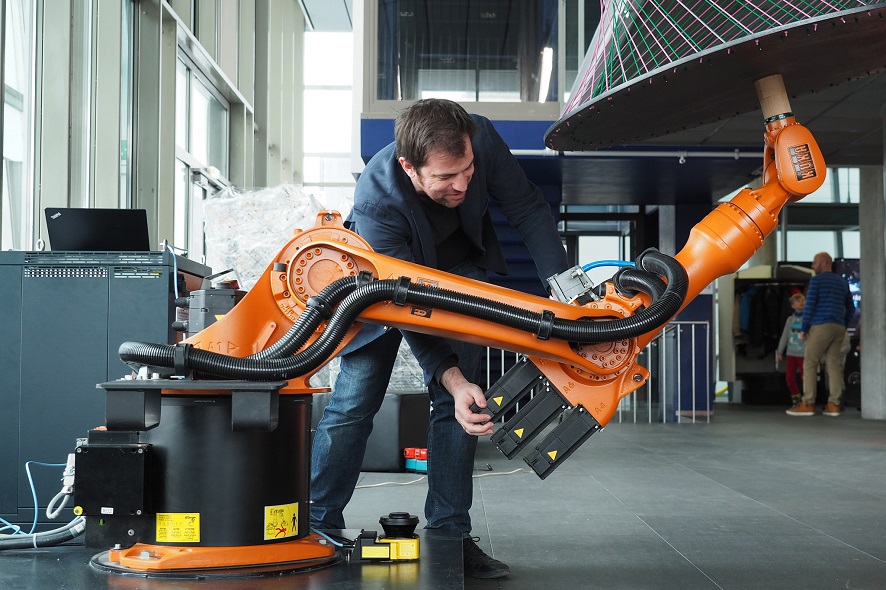 Robots don’t just weld, lift, or put in screws – sometimes they also draw, or whittle, or even dance. In short, even robots can be used for creative purposes. What exactly does that look like? That’s what Johannes Braumann, head of the Laboratory for Creative Robotics at Linz Art University, and his team are researching.

In December 2018, the robotics expert gave an account of his work for the lecture series “Future in a Nutshell,” which Ars Electronica Export put together for the plastic producer Greiner in Kremsmünster. He met us for an interview and shared some impressions… 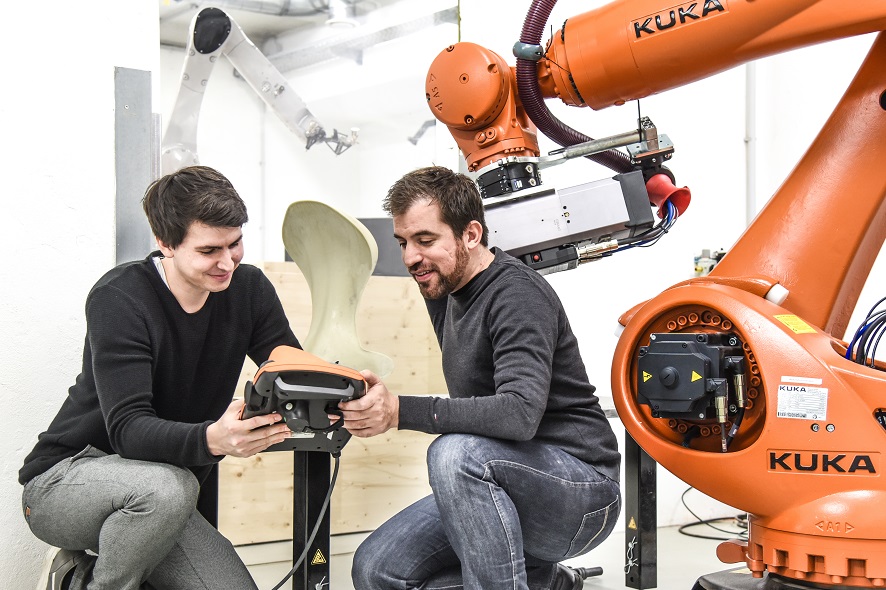 In creative robotics you use robots that are normally found in industrial settings. What do these robots usually do?

Johannes Braumann: We do work with industrial robots. Usually when we think of robotics, we think of machines developed for a special purpose. But we‘re not that interested in building robots themselves. Instead, we try to get the robots to do things they normally don’t do. That’s why we use machines that already exist. That means we’re not starting from zero, we’re working with a machine that’s already been solidly built and developed and does exactly what you tell it to.

Which branches of industry do the robots come from?

Johannes Braumann: Primarily from the automotive industry. The image most of us have of auto production are all those orange robots working on cars with welders and screws, bonding and lifting them, doing lots of different things. We work with exactly those machines. But they are found in many other industries now; at Greiner, for example, they are used for packaging. They lift products onto palettes or pack them up. The same robots are also used in the food industry or even amusement parks. The exciting thing about it is that we can equip the robots with different tools to make a robot that works as a robocoaster at an amusement park into a robot that moves plastic or welds cars together. It mainly depends on the tool that’s attached to the robot arm. That makes these machines very flexible. 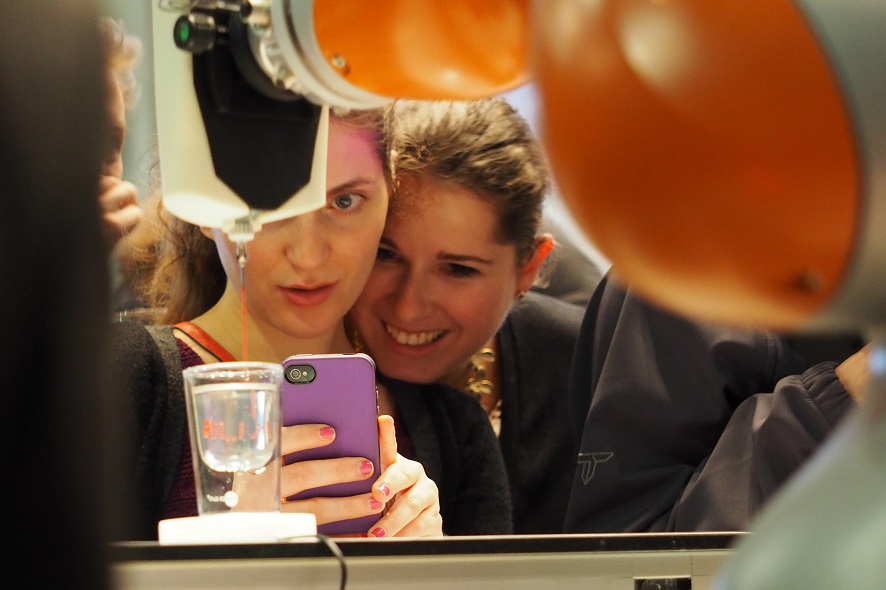 What does creative robotics entail?

Johannes Braumann: Just as the term “robot” is rather vague, so is creativity. Everyone has a different idea of what it means. But for us, that freedom is a good thing, because it keeps us from getting too narrowly defined. We’re not only working on additive manufacturing and 3D printing, or in subtractive, or visual media or digital art – we are purposely keeping things very broad. I think creativity can also be something very technical. Creative actually means thinking outside the box, finding new solutions and creating innovations and new projects. So we often work with artists on projects where the robot itself is the work of art. We work with craft businesses that produce tangible objects, and we are also active in virtual and augmented reality where the question is how to connect these worlds to each other.

How do you control the robots?

Johannes Braumann: We developed a proprietary software that works with an interface that can be programmed visually.  The software is called KUKAǀprc, which stands for Parametric Robot Control. We developed it precisely so that you can work with robots without needing to have this very specific robot expertise – instead you can work with an interface that’s already familiar to many architects, designers, and artists. It allows you to connect something you would usually draw to the robot. The robot brings everything from the digital drawing into the real physical object of the kinetic sculpture, or just into the output.

How did creative robotics get started?

Johannes Braumann: We got started back at the Technical University Vienna by using robots for a very specific purpose, which was milling, but nothing else. So we started looking at other things the robot could do. We hacked the robot. It’s not something that is directly supported, it’s not an open system – first you just have to try to understand the system so you can adapt it for your own goals. Then more and more uses opened up. We saw that robotics wasn’t just of interest for model building, but also for one-to-one production, digital media or art, and even crafts. Basically, we wanted this overlapping area so we could do more with the robots, and when we found the overlap, we realized more and more areas where there was interest and uses for them. And it’s still going on! After the talk at Greiner, for example, people came to us with totally new ideas again, and new things can develop from there. 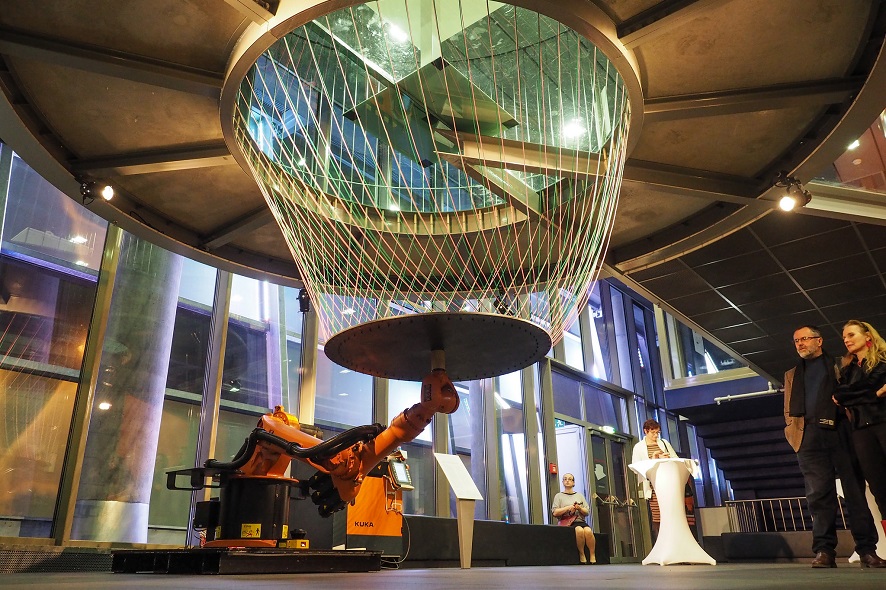 Johannes Braumann: They’re all completely different. For example, we just finished a project involving artisan polished metal. We used a robot that can feel resistance, so you can stand next to it and work. The robot “notices”, in a sense, when you touch it. Other machines normally wouldn’t. This project was a joint one with a company where collaborative metal bending is really part of the day-to-day work. But there are also very artistic projects that inspire people to think about all the things a robot can do. The “Robot, Doing Nothing” exhibit by designer Emanuel Gollob, currently showing at Art Electronica Export’s “ERROR – The Art of Imperfection” exhibition at DRIVE Volkswagen Group Forum, is very exciting. We already showed the robot in 2017, at the Ars Electronica Festival, but that was different, of course – it was only there for five days. This time it was an installation that had to be built in a very classy but therefore rather delicate setting. So what’s standing there now is a black robot with colorful elastic strings and, as the title says, it’s doing nothing. The robot isn’t producing anything, it’s just moving in a very aesthetic way, which invites us to reflect – not only about robots, but about ourselves, too. Another example is our collaboration with KUKA: for the new Central and Eastern Europe Headquarters, we are working on developing a robot that greets people. This project combines various fields of knowledge; we bring expertise from robotics, a digital media artist brings his expertise in projection mapping and real-time visualization. 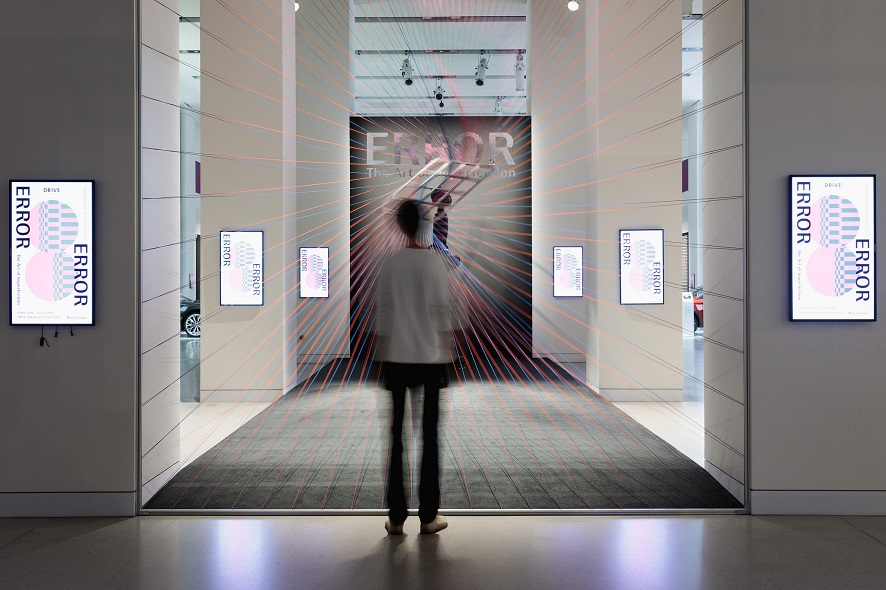 Johannes Braumann: It’s always a matter of trust and routine, and at this point we’ve acquired a reputation, even at the international level, for knowing a lot about the devices. You mustn’t forget – it’s about machines that are very crude, very heavy and absolutely dangerous if you don’t use them correctly. So safety is definitely an issue. We’ve shown that we can find good approaches and solutions for completing projects that are visually impressive but also respect the audience and their surroundings. 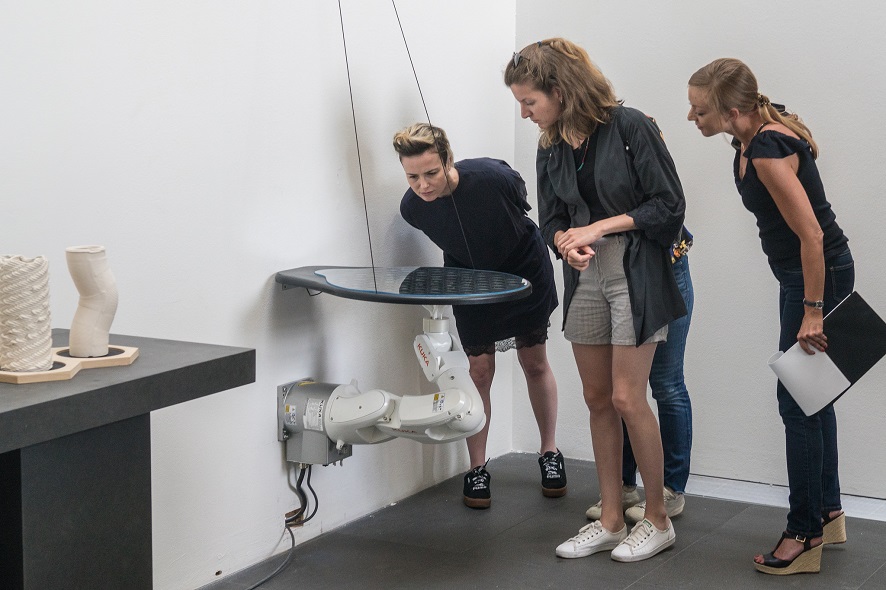 What do you see as the future of creative robotics?

Johannes Braumann: The tools and overlapping areas will keep developing, there’s no debate about that. We’ll be able to connect ourselves with more and more systems, whether it’s machine learning, IoT or something completely different. I think it’s very exciting that robotics is increasingly becoming ubiquitous, that we will find machines at more and more places and those machines will get more and more mobile. A wide range of consequences and technical challenges comes with that – it’s not finished when the building process is done – but I think there will always be more in that direction. To allow those things to happen, we need to emphasize education. We want to be able to talk to children, young people, craftspeople or professionals in different sectors and introduce these methods to them. Starting in 2019, our robots will move from the Art University’s basement to an additional, new laboratory the GRAND GARAGE in the old tobacco factory in Linz (now a cultural area for the creative industries), where we can address ourselves to other interested parties. It doesn’t mean you have to use more and more robots, but I think it’s important that people simply understand what’s possible. But of course at the same time it’s about the limitations of robots. When you give people experiences, it helps to reduce fear but also to increase interest in getting involved and maybe using that knowledge in totally new areas. It’s through these educational efforts, installations, activities like our exhibits and lectures –like the one at Greiner – that our projects come about. 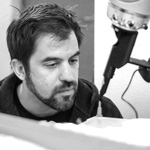 Johannes Braumann, together with Sigrid Brell-Cokcan, founded the Association for Robots in Architecture in 2011 with the aim of making robots accessible to the creative industry. Robots in Architecture is active on the one hand as a network of creative, innovative robot users, but is also developing its own highly adaptable and at the same time easy-to-use software for robot programming and simulation, KUKA|prc, under the direction of Johannes Braumann. KUKA|prc is now also used by more than 100 international universities and 50 corporate partners for programming complex, parametric manufacturing processes – from large-format CNC production to innovative 3D printing in the construction industry. Since 2017, Johannes Braumann has headed the Creative Robotics department at UfG Linz as a university professor. This department was established in close cooperation with the Ars Electronica Center and KUKA Roboter CEE GmbH. The goal of Creative Robotics is above all the transfer of craftsmanship or process-specific knowledge to the robot, whereby new possibilities are to be created rather than replacing humans. CR works in this way on the one hand with craft businesses and SMEs, but also with companies such as VW and McLaren. In 2018, Johannes Braumann received the ACADIA Society Award for Leadership for his work.