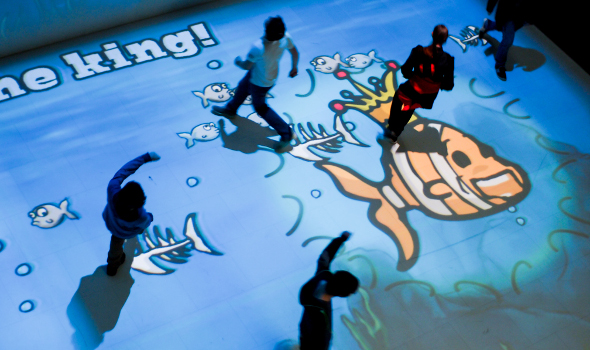 Game Changer Suite is a collection of multiplayer games that were developed as prototypes by students at the Upper Austria University of Applied Sciences’ Hagenberg Campus. The accent in Game Changer is on exploring cooperative and competitive game playing. The gamers moving about in Deep Space 8K are registered by means of laser tracking, which enables them to control their virtual avatars projected onto the space’s wall and floor. Getting their whole body into the swing of things, they can play out a variety of scenarios—either collaboratively or every man for himself. Originally developed as a temporary installation for the 2014 Ars Electronica Festival, Game Changer Suite is now a mainstay of the lineup in Deep Space 8K at the Ars Electronica Center.

Fish Feast is the most primal member of the GameChanger family. The goal is simply to consume as many non­player fish as possible and grow to a formidable size. But beware: the largest player fish (signified by the crown on its head) can also devour other player fish and eliminate them from the game. An electric eel occasionally wanders into the area and attempts to take the largest fish down a notch. Do you have what it takes to be the biggest fish in the sea?