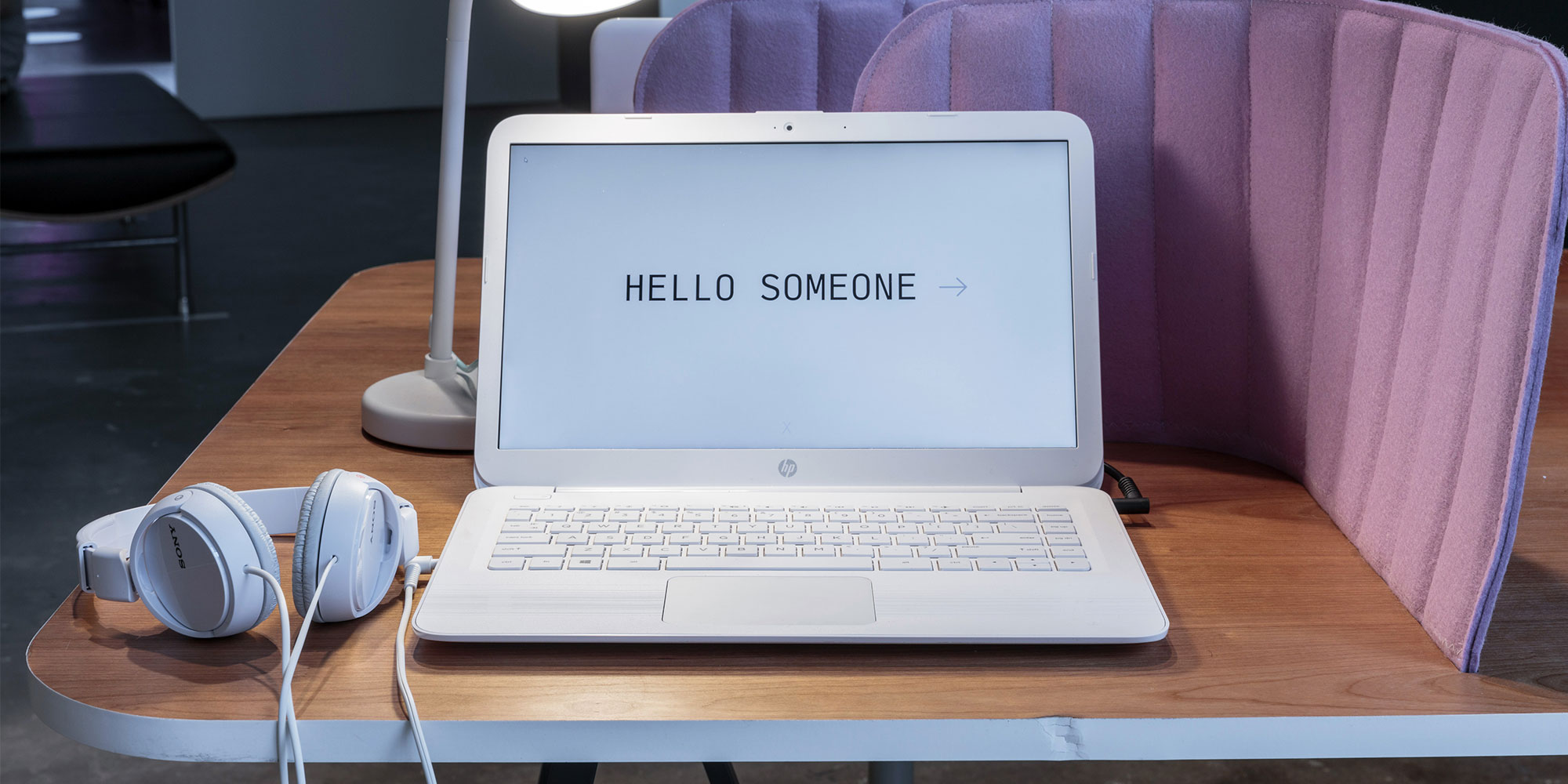 For FACYL 2021 Ars Electronica curated video-based artworks which speak directly to the visitors and allow them to get a glimpse into the perspective of the technology itself. How does digital technology access our data, what does it see and hear? These are the questions the artist address.

Lauren Lee McCarthy’s SOMEONE let the visitors look and listen through the “eyes” of a digital home assistant service, like Alexa. Cosima Terrasse, Moritz Riesewieck and Hans Block from the Group Laokoon explore if they can recreate the life of an unknown person only through their google data. With Generation Y by Anna Kaufmann and Sonja Groiss, a from youth for youth game about data ownership and online activism will be introduce. A speculative IPA, intelligent personal assistant, tells us about what it hears, sees and knows in Not Allowed for Algorithmic Audiences by Kyriaki Goni. Halsey Burgund and Francesca Panetta explain what deepfake is and how it can have irritating outcomes around historic facts with their artwork In Event of Moon Disaster and accompanied short documentary How to Strand Astronauts on the Moon.

Besides these artworks, Ars Electronica team members and some of the artists share their expertise and insights around the question of the role of festivals in a city’s cultural life through video presentations as well as interviews. Gerfried Stocker, (Co-CEO and Artistic Director), Veronika Liebl (Managing Director Festival, Prix, Exhibitions) and Laura Welzenbach (Head of Export) are the speakers.

The interview with Cosima Terrasse and Moritz Riesewieck two of the three members of Group Laokoon for the Ars Electronica Festival TV Station 2021 as well as the presentation and interview with Anna Kaufmann and Sonja Groiss allow us to dive deeper into their projects.

The presence in Salamanca will be rounded up by showing the Expended Theater as well as Young Animation films of Ars Electronica Animation Festival on Tour.

Lauren Lee McCarthy (US): Someone

Video Documentation of the Artwork 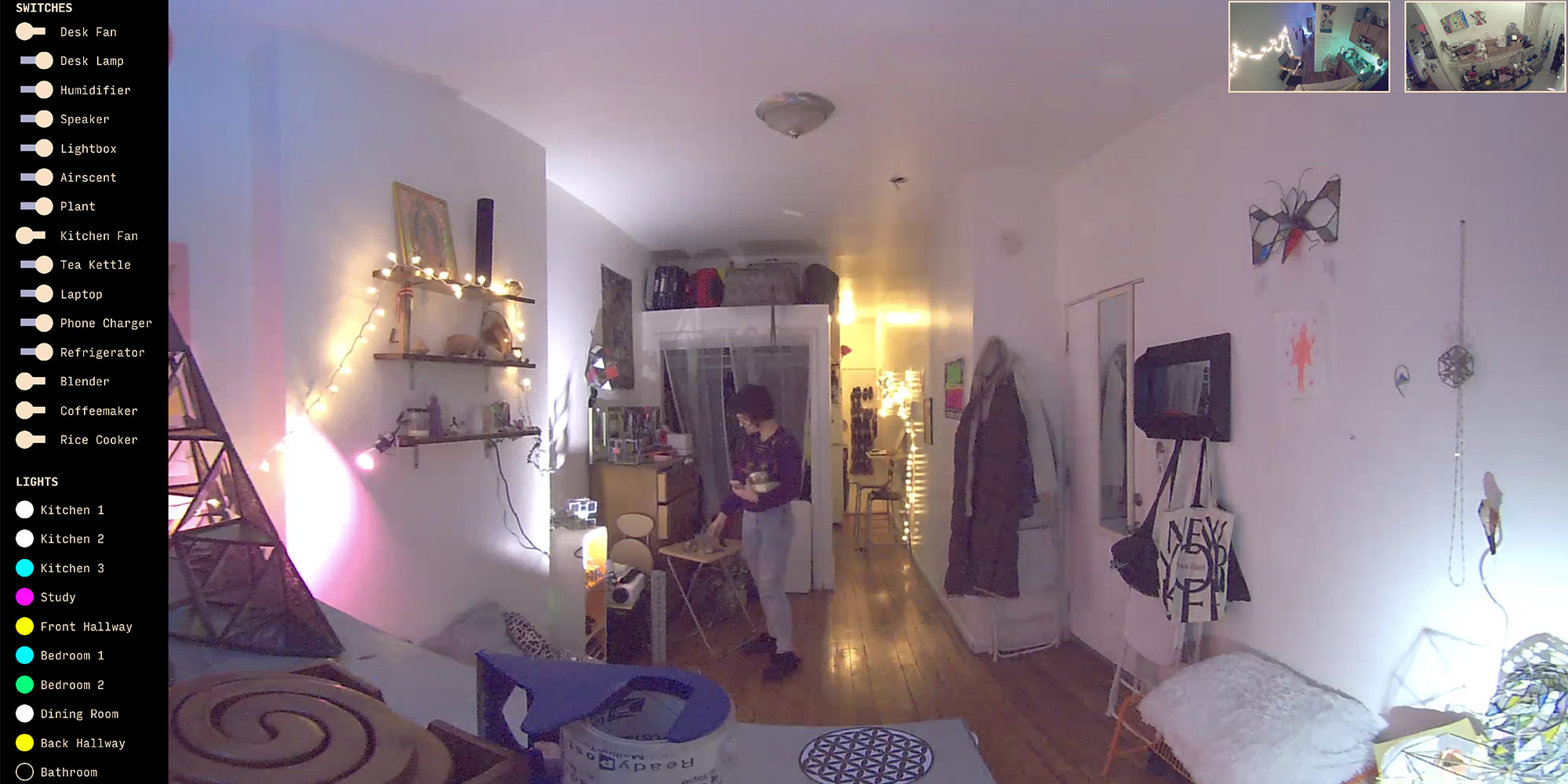 Visitors were invited to act as a human version of Amazon Alexa. For the exhibition, four participants’ homes are installed with custom-designed smart devices, including cameras, microphones, switches, lights, and appliances. The gallery contained a command center that resembles a cross between call center and WeWork co-working space, featuring four computer stations. Visitors heard smart home occupants call out for “Someone”—prompting the visitors to step in as their home automation assistant and respond to their needs. They could peek into the four homes via the laptops, watch over them, and remotely control the devices in their homes. This installation was originally a live remote intelligence portal into four homes across the United States that took place over a two-month duration. Here, in this exhibition we see a video excerpt of this artwork.

Group Laokoon: Cosima Terrasse, Moritz Riesewieck and Hans Block: Made to Measure — I is a Search Engine

Video Presentation based on Made to Measure 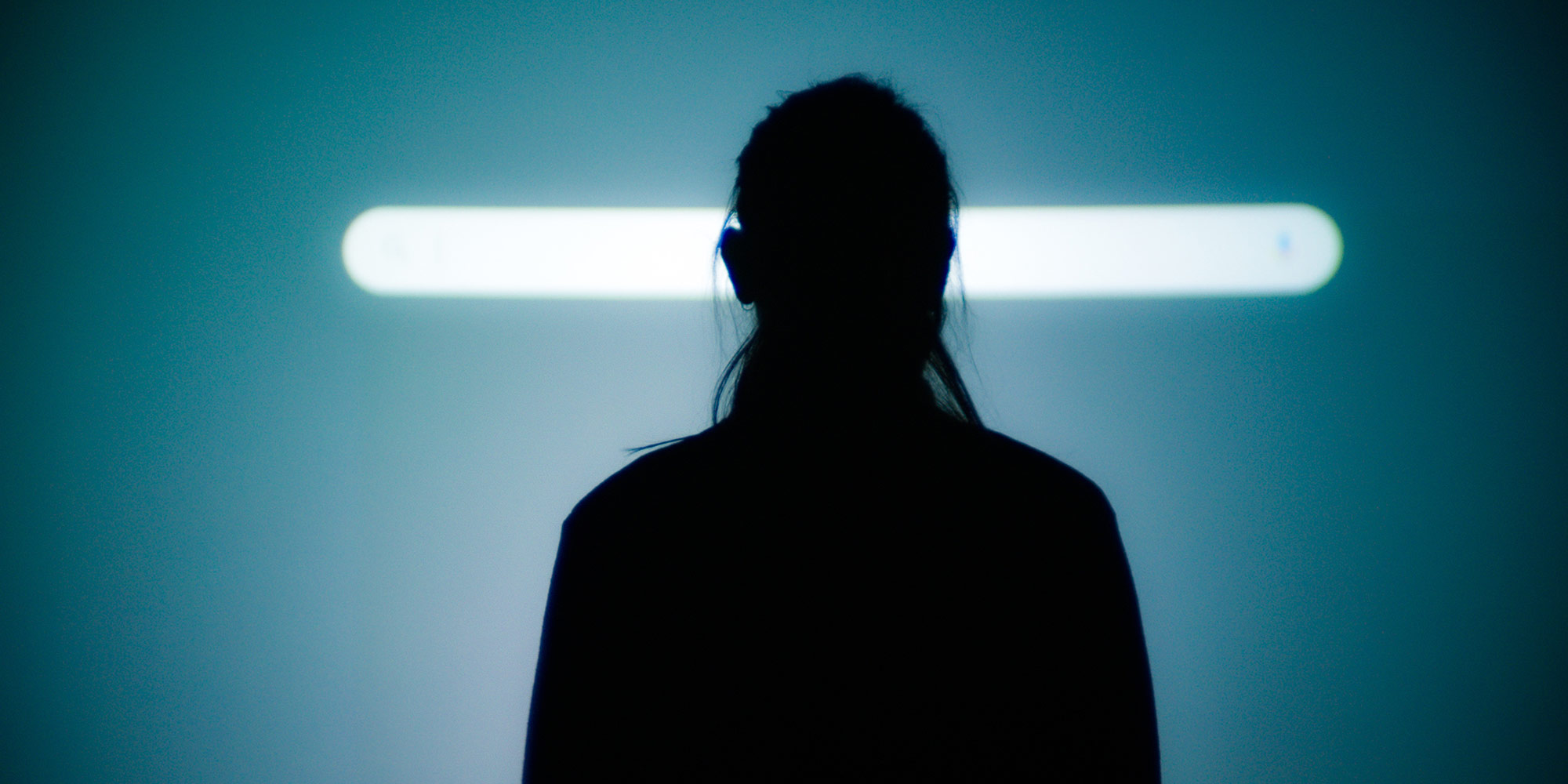 Is it possible to create the doppelganger of someone using only their personal Google data? This question stood at the core of the project Made to Measure. Using personal online data, the group Laokoon created a doppelganger of a person they did not know, telling “her” story. The spectacular experiment can be experienced on an interactive storytelling website.

In this Journey, Laokoon cinematically recorded the installation of Made to Measure at this year’s Ars Electronica Festival and captured the reactions and impressions of the audience. Complemented by excerpts from interviews with experts who explain how the information collected is used for profiting from people’s weaknesses, insecurities, illnesses and addiction potentials.

Credits
These video commissions are presented in the framework of the European ARTificial Intelligence Lab, which is co-funded by the Creative Europe Programme of the European Union and the Austrian Federal Ministry for Arts, Culture, Civil Service and Sport.

Video Trailer of the Game and Interview 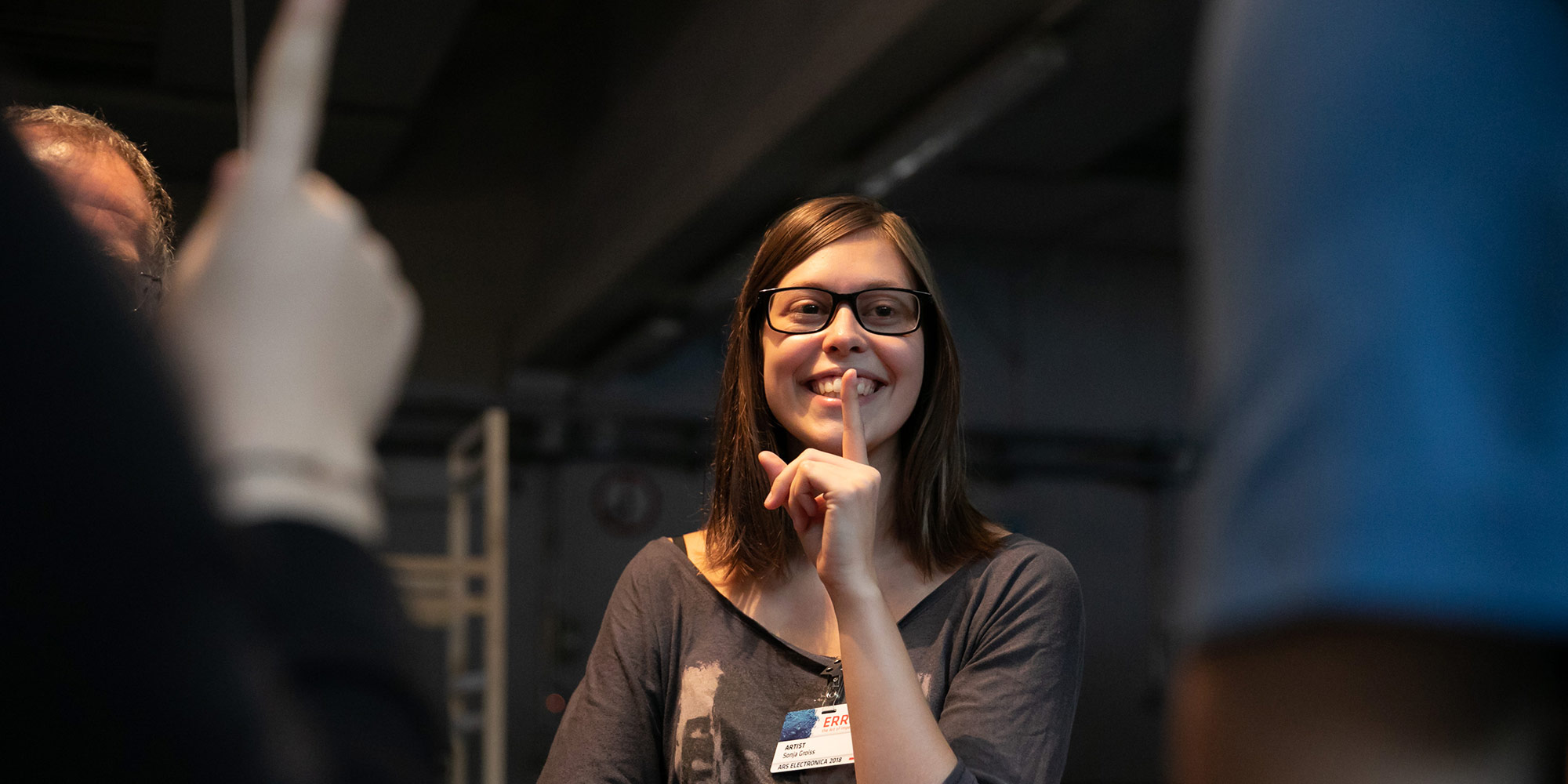 The story of the game: In a speculative future, the big data company Cryptoconda became so influential that they managed to replace the government of our time. Cryptoconda systematically collects data through their innovations, which increasingly restrict society’s privacy. So, it came about that a group Generation Y, which opposes the monopolistic power of the corporation through protests and demonstrations, was formed. However, Cryptoconda’s employees have crept into this group to thwart this resistance. It’s now up to Generation Y! Will they be able to help shape digitization in a positive way or is Cryptoconda unstoppable?

Background Story: Anna and Sonja submitted their game to the u19 Prix Ars Electronica and therefore presented their work at the create your world exhibition. It was the right place to get to know and connect with new people. The positive response was motivating and in 2021 the artists were asked by the Ars Electronica education team if it is of interest to develop an own workshop with their board game Generation Y being the basis for it. They adapted their project, and the workshop Generation Y can now be held online as well as in-person and is part of create your world tour, where projects visit schools. 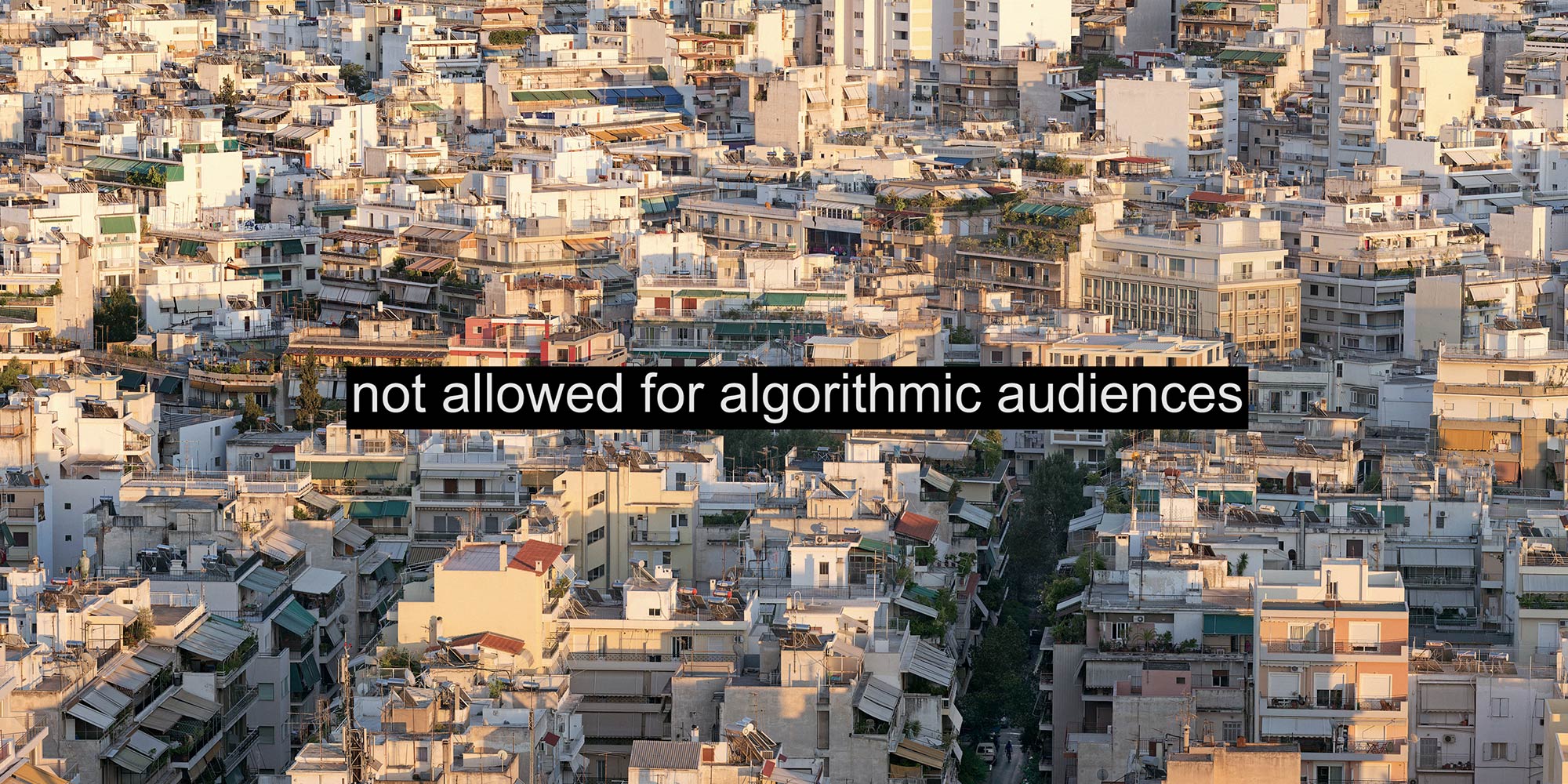 A big number of audiences online nowadays is mainly algorithms. Algorithms are trained on the auditory information, that is produced and uploaded by humans. In the video ‘Not allowed for algorithmic audiences’, an Intelligent Personal Assistant (IPA), situated in the extremely hot city of Athens in Greece, exhibits an odd behavior.

They borrow an avatar and appear before their users. For a brief period of time, for seven consecutive days before they shut down for ever and end up in an e-waste, the IPA goes into seven monologues. During their length of operation, they have managed to scan the entire contents of the Internet and gather all sorts of information, information that they long to share.
The IPA uses their seven brief monologues as an opportunity to introduce themselves, talk about their skills, their ancestors, their anatomy and origins, and about voice and its significance. They reveal data regarding the listening infrastructure as well as the social dysfunctions on which their programming and operation are based. Just before they reach the end of their monologues, in a final effort to reconcile humans and machines, they share tips with humans on how they can manage… not to be heard by algorithms.

In her project, Kyriaki Goni, integrates in a fictional narrative the current wealth of research on artificial intelligence and voice interfaces, as well as the relationship between humans and machines. Listening infrastructures, surveillance and climate crisis are as well part of this narration. Could poetics be a way for us to understand the machines? Can we de-bias the training processes? Is it possible to make kin with the machines?

This Artwork was developed during the ArtScience Residency, enabled by the partnership of Ars Electronica and Deutsche Telekom and with the support of the Johannes Kepler University Linz, Austria.

In July 1969, much of the world celebrated the “giant leap for mankind” of the successful moon landing. Fifty years later, nothing is quite so straightforward. In Event of Moon Disaster illustrates the possibilities of deepfake technologies by reimagining this seminal event. What if the Apollo 11 mission had gone wrong and the astronauts had not been able to return home? A contingency speech for this possibility was prepared, but never delivered, by President Nixon—until now.

In Event of Moon Disaster invites you into this alternative history and asks us all to consider how new technologies can bend, redirect, and obfuscate the truth around us. The project has a physical installation as well as an online component. The installation version consists of a 1960s American living room set allowing viewers to step back in time to watch the coverage of the Apollo 11 mission live on a vintage TV. The film journeys from blast off all the way to the moon where something goes terribly wrong and Neil Armstrong and Buzz Aldrin are stranded, prompting President Nixon to deliver the elegiac contingency speech to a mourning world. The website contains both the film and accompanying educational materials as well as a quiz used to evaluate the effectiveness of the awareness campaign.

Halsey Burgund (US), Francesca Panetta (UK): How To Strand Astronauts on the Moon

The narrative of In Event of Moon Disaster is a journey; a journey filled with the technical and emotional triumphs of individuals and a nation that ultimately comes to a tragic end on the lunar surface. Using an analogous voyage through highs and lows, we trace our personal journey of creating In Event of Moon Disaster diving into the dual nature of AI-enhanced synthetic media: on the one hand, an incredibly powerful creative and educational tool and, on the other hand, potentially the most effective purveyor of disinformation society has ever seen. We illuminate some of the technologies used to create our deepfake and tap into experts in AI, law and disinformation to contextualize and broaden the perspective. And in the spirit of practicing what you preach, we use synthetic media techniques to enhance the video, directly demonstrate the power of these new technologies and create a dramatic surprise twist!

Credits
These video commissions are presented in the framework of the European ARTificial Intelligence Lab, which is co-funded by the Creative Europe Programme of the European Union and the Austrian Federal Ministry for Arts, Culture, Civil Service and Sport.