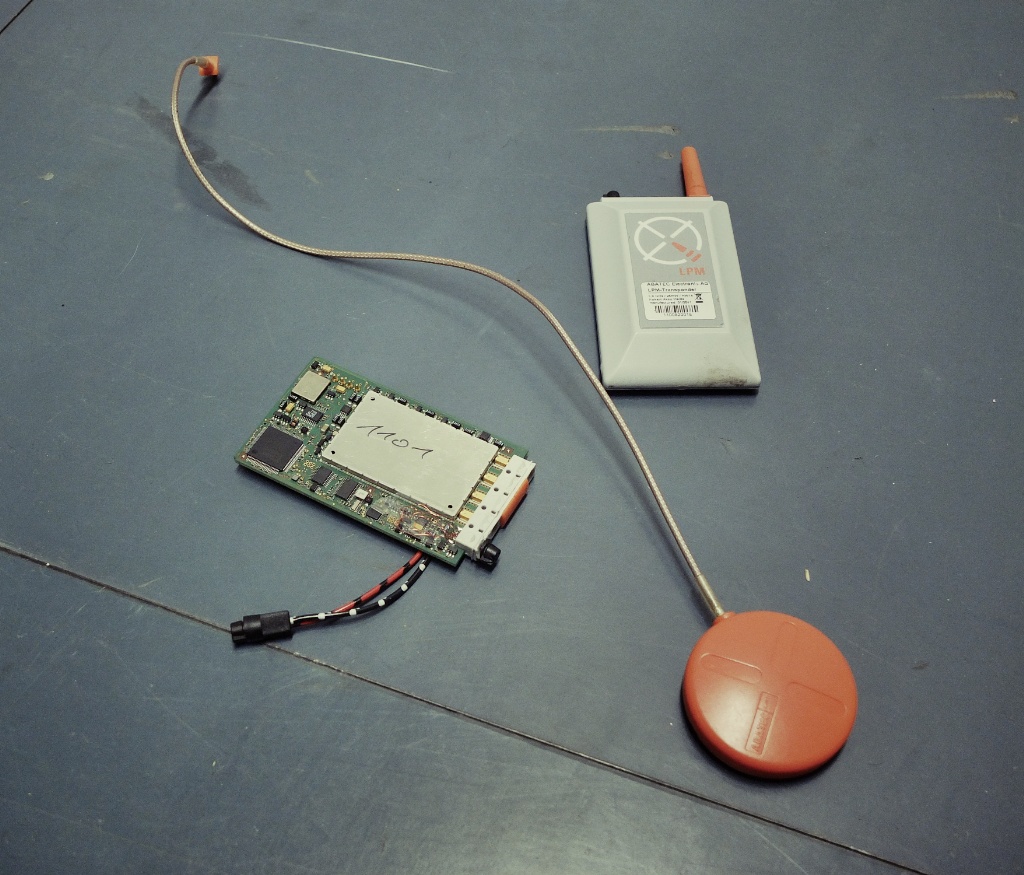 The Ars Electronica Futurelab’s quadrocopter formation that debuted at the 2012 voestalpine Klangwolke has created a sensation, one that commenced on site during the extravaganza itself and has continued online ever since. But since, as we all know, laurels aren’t for resting on, Futurelab staffers are already hard at work taking their Spaxel concept to the next level of development. 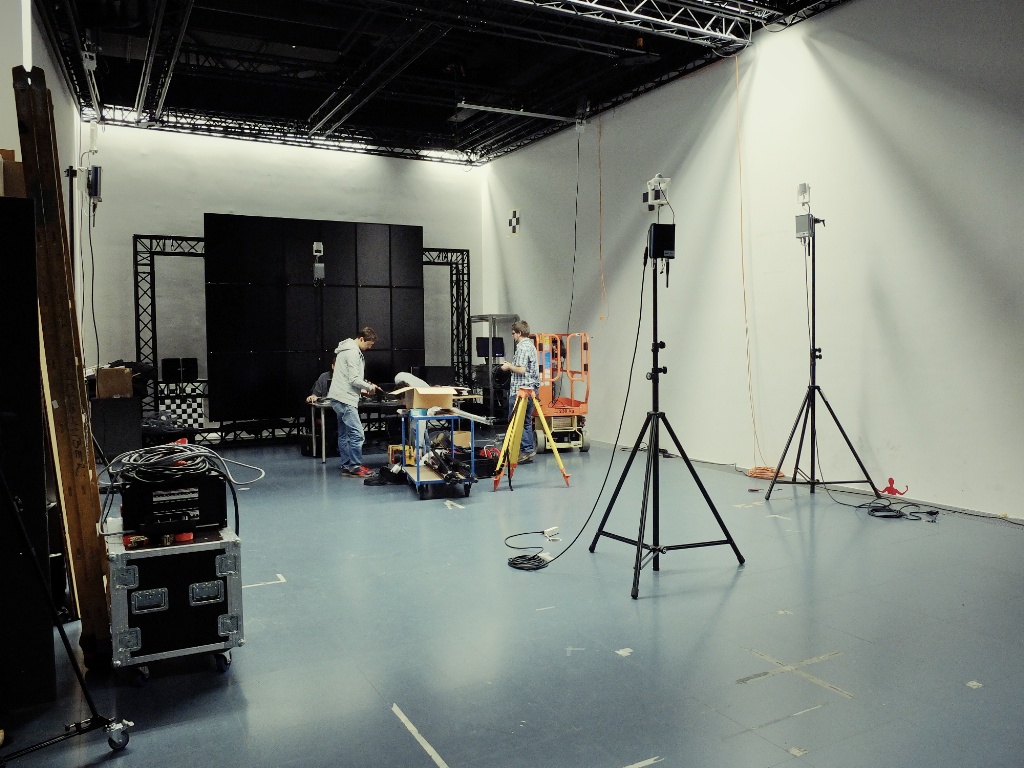 A new testing environment was recently installed in the Futurelab atelier. Its core element is inmotiotec’s LPM (local position measurement), a radio-based positioning system that can be deployed both indoors and outdoors. Until now, coordinating the quadrocopter swarm depended on GPS reception and thus only worked outside. With this new positioning technology, such limitations are a thing of the past.

Here you can see the transponder. The left one is used for the quadrocopters, the top one is encased for use in sports, for example, the orange part is the antenna

The new tracking system constitutes a quantum leap in the aerial navigation of drones. Positioning is vastly improved in comparison to using only GPS in that the margin of precision is reduced from 5-6 meters to a mere 5-15 centimeters. Considering that a quadrocopter is only about 30 centimeters in diameter, it’s clear that we’re talking about a whole new ballgame in pinpoint coordination. In other words: the creative department can now pick up the ball and really run with it!

Like so many great ideas, the desire for a bit more convenience drove the inception of LPM. Using TV images to analyze the play of handball teams in matches and training is a complicated undertaking and, once all is said and done, you never get totally comprehensive data anyway. This gave rise to the idea of using radio signals to establish and record the position of each individual player. Documenting the ground they covered on the playing field was taken to a whole new level. 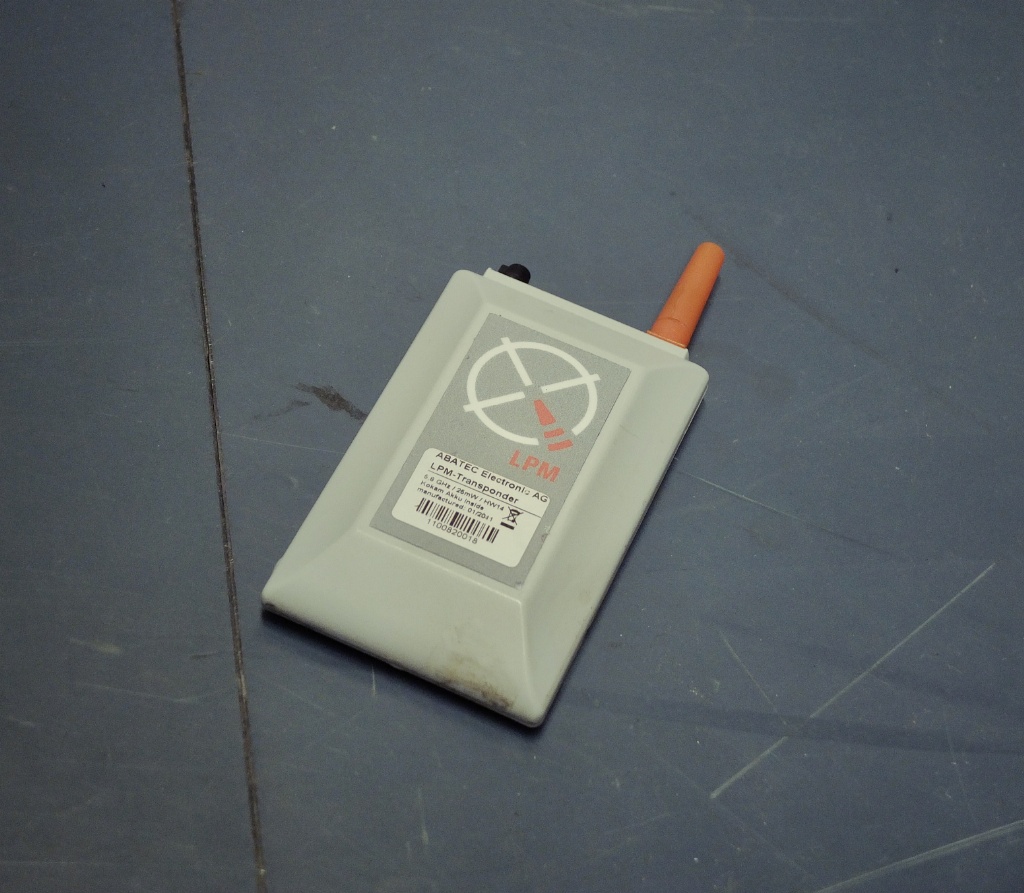 Close-up of the transponder which is used for football, handball or other sports

Today, advanced technology is widely used in the world of sports and the entertainment industry. Now, the Spaxel is getting a high-tech makeover. The way it works is fairly simple. At least 12 receivers are set up around an area and calibrated to a reference transponder that must be in the line of sight of all 12 receivers. This system can process 1,000 position signals per second. If the swarm consists of 50 quadrocopters—as the Futurelab’s does—then the position of each individual drone is determined via triangulation 20 times/second, which allows for very precise flight paths. In order to reduce weight, the transponder shares a common battery with the respective quadrocopter on which it’s mounted, and this arrangement provides sufficient energy for both units.

lpm + Quadrocopters = The Way of the Future?

Adding LPM to the equation significantly improves the quadrocopters’ performance. Working in tandem with GPS, the new system is very reliable and precise. Plus, the quadrocopters are no longer limited to large exterior spaces; now, they can show off what they’re capable of in comparatively small indoor venues too—for instance, Deep Space at the Ars Electronica Center. Bottom line: the portal leading to multimedia, virtual applications is wide open!

Another potential use of a Spaxel is architectural visualization. Here, a 3D model of a building could be formed by the flight paths of the quadrocopters, whereby time-exposure photography could produce an image showing precisely how the building, bridge or monument will actually appear. If 50 quadrocopters were aloft simultaneously, it would even be possible to create such visualizations in real time.

So the Spaxel Project is still only in its infancy. Upgrading the hardware and software is going hand in hand with opening up interesting new creative fields. In conjunction with other technologies such as the previously mentioned tracking system or interactive smartphone apps, the Spaxel could become a major player when it comes to creating virtual worlds.