We have been analyzing and commenting on the Digital Revolution since 1979. Since 1996, we have been developing projects, strategies and competencies for the Digital Transformation. Together with artists, scientists, technologists, designers, developers, entrepreneurs and activists from all over the world, we address the central questions of our future. The focus is on new technologies and how they change the way we live and work together. 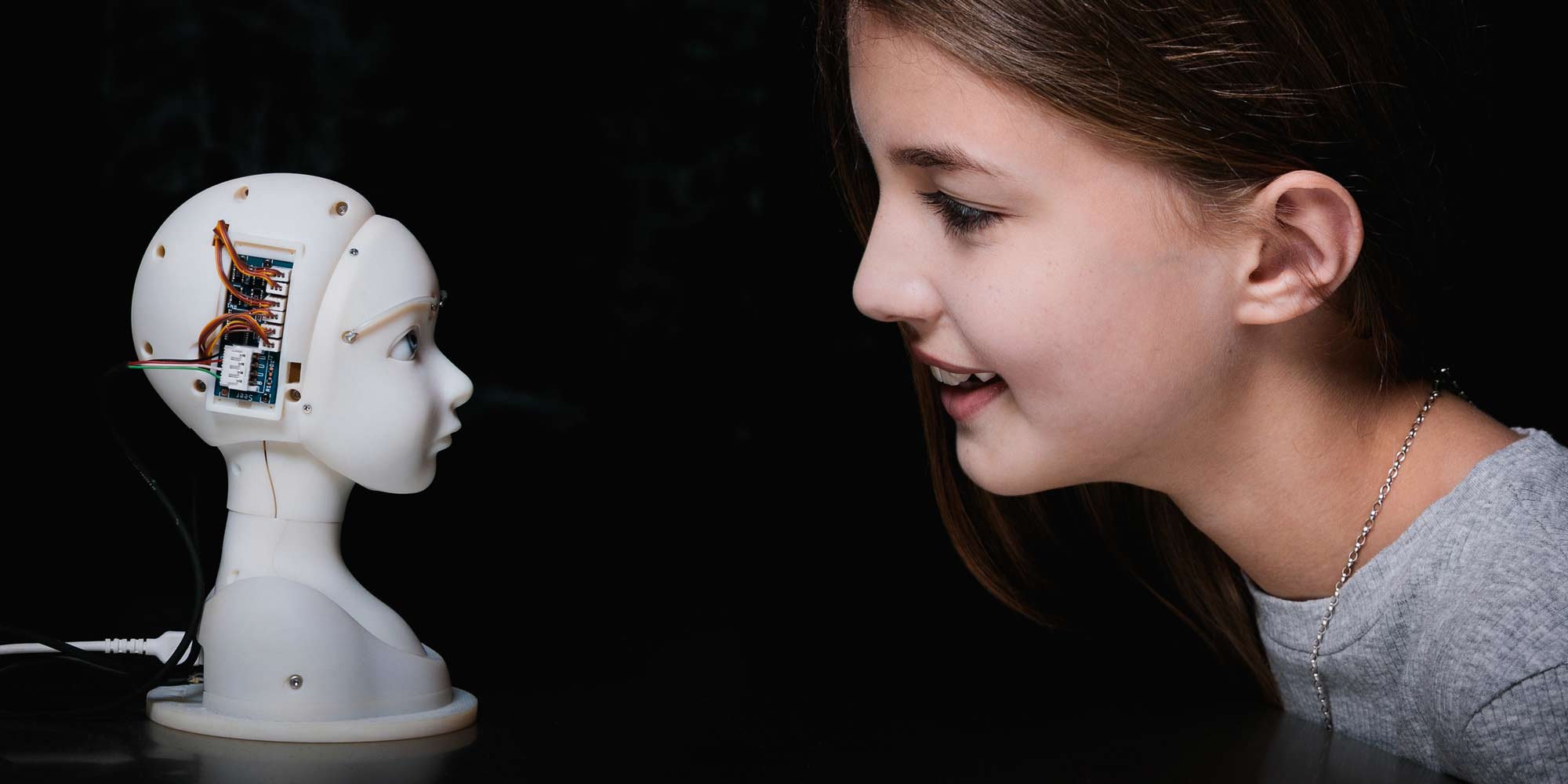 Machines and people are forging ever closer ties. But what does this mean for us and our self-image?
SEER: Simulative Emotional Expression Robot / Takayuki Todo, Credit: vog.photo

“There’s so much we don’t see yet, so much that’s still hidden; no one really knows where the digital revolution will take us.”

A new festival. The first Ars Electronica begins on September 18, 1979. 20 artists and scientists from all over the world gather at this new “Festival for Art, Technology and Society” in Linz to discuss the Digital Revolution and its possible consequences. This Ars Electronica is small, but groundbreaking. The initiative for this came from Hannes Leopoldseder (AT), director of the Upper Austria regional studio of the Austrian Broadcasting Company (ORF), who is passionate about everything that has to do with the future. Together with the electronic musician Hubert Bognermayr (AT), the music producer Ulli A. Rützel (DE) and the cyberneticist and physicist Herbert W. Franke (AT), he lays the foundation stone for a festival that will become the world’s largest and most important of its kind.

“Ars Electronica has always been open to signals from the future, open to experimentation.” 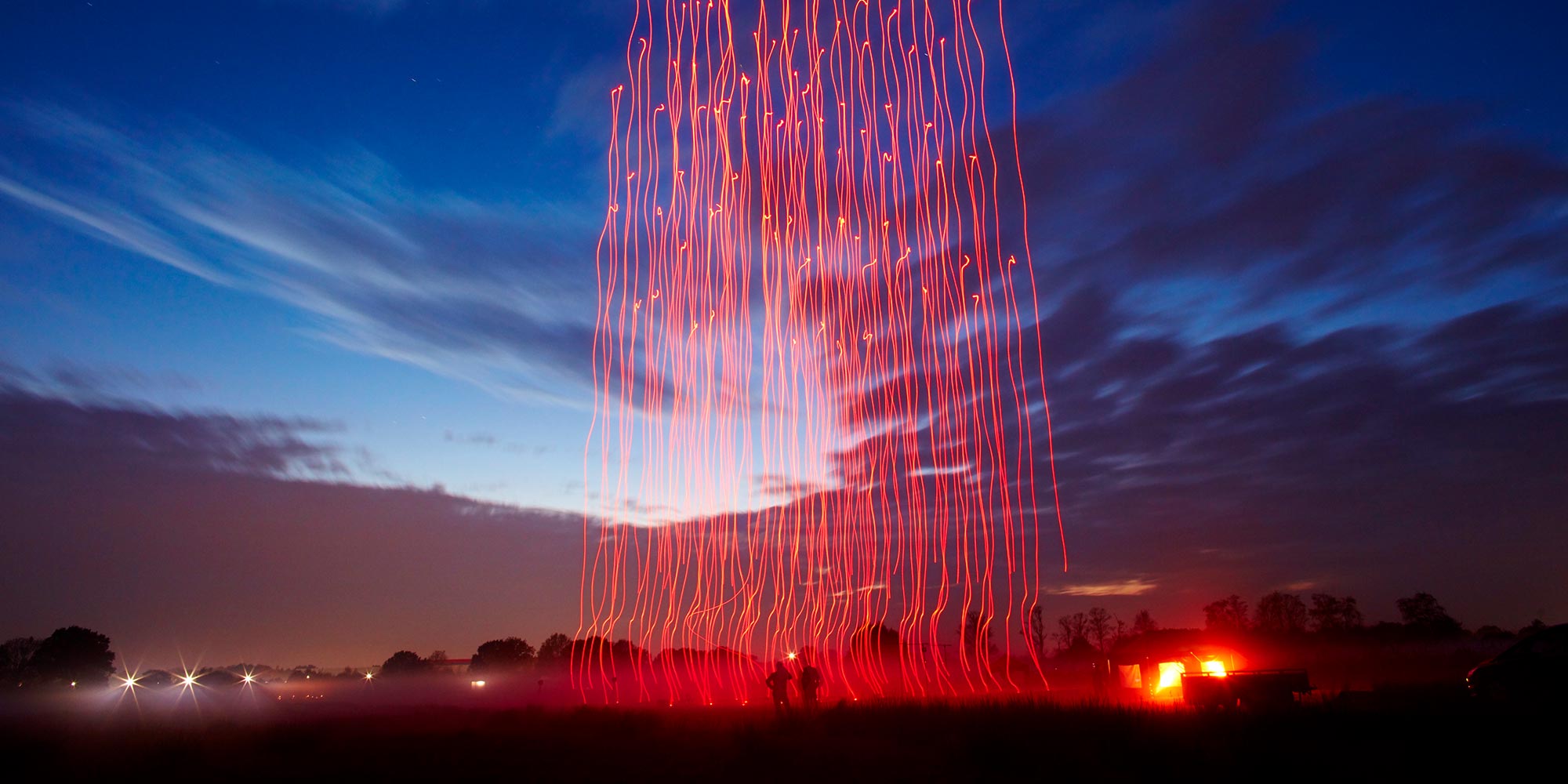 In the center we humans. Since September 18, 1979, our world has changed radically, and digitization has covered almost all areas of our lives. Ars Electronica’s philosophy has remained the same over the years. Our activities are always guided by the question of what new technologies mean for our lives. Together with artists, scientists, developers, designers, entrepreneurs and activists, we shed light on current developments in our digital society and speculate about their manifestations in the future. We never ask what technology can or will be able to do, but always what it should do for us. And we don’t try to adapt to technology, but we want the development of technology to be oriented towards us. Therefore, our artistic research always focuses on ourselves, our needs, our desires, our feelings. 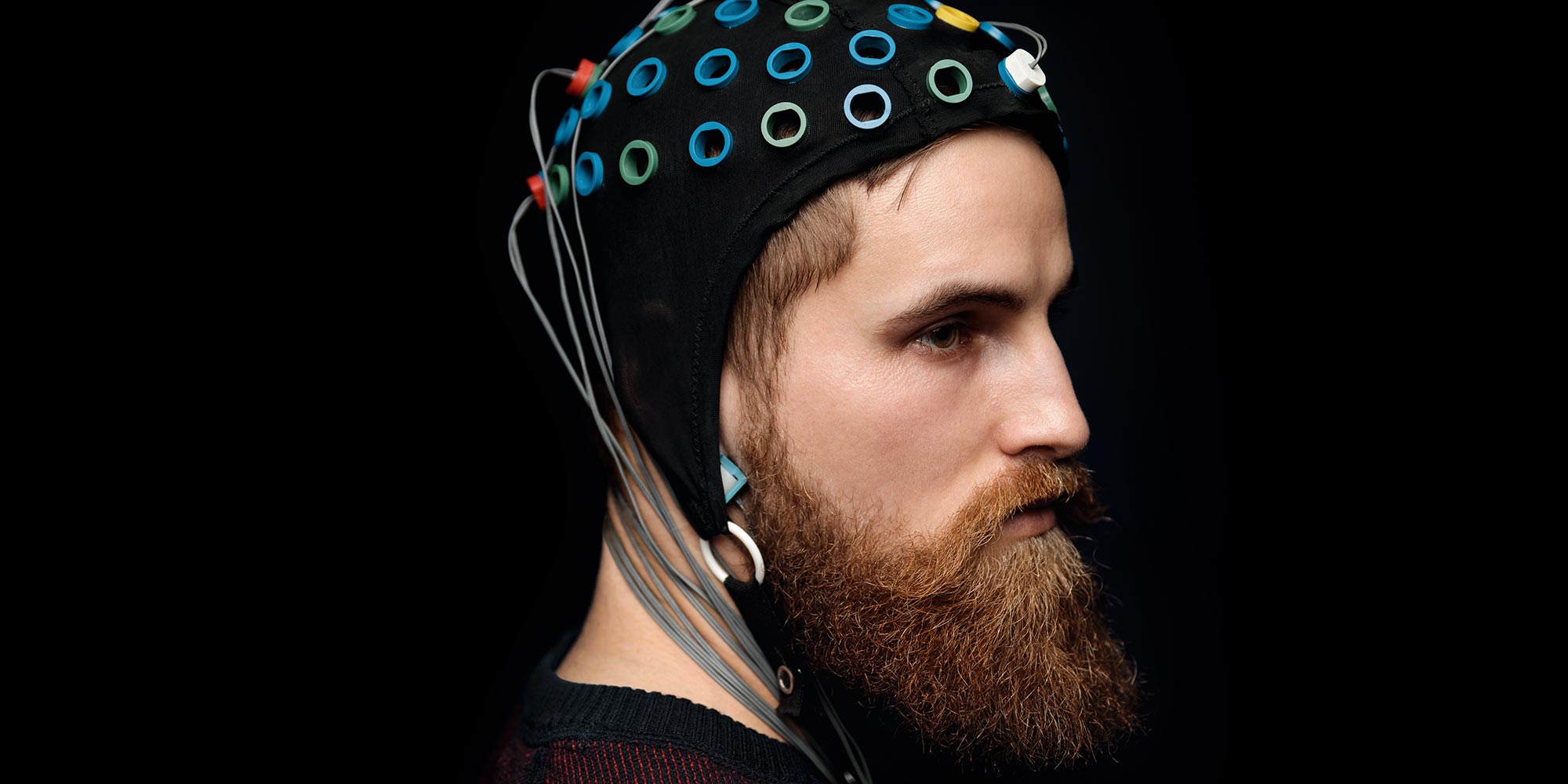 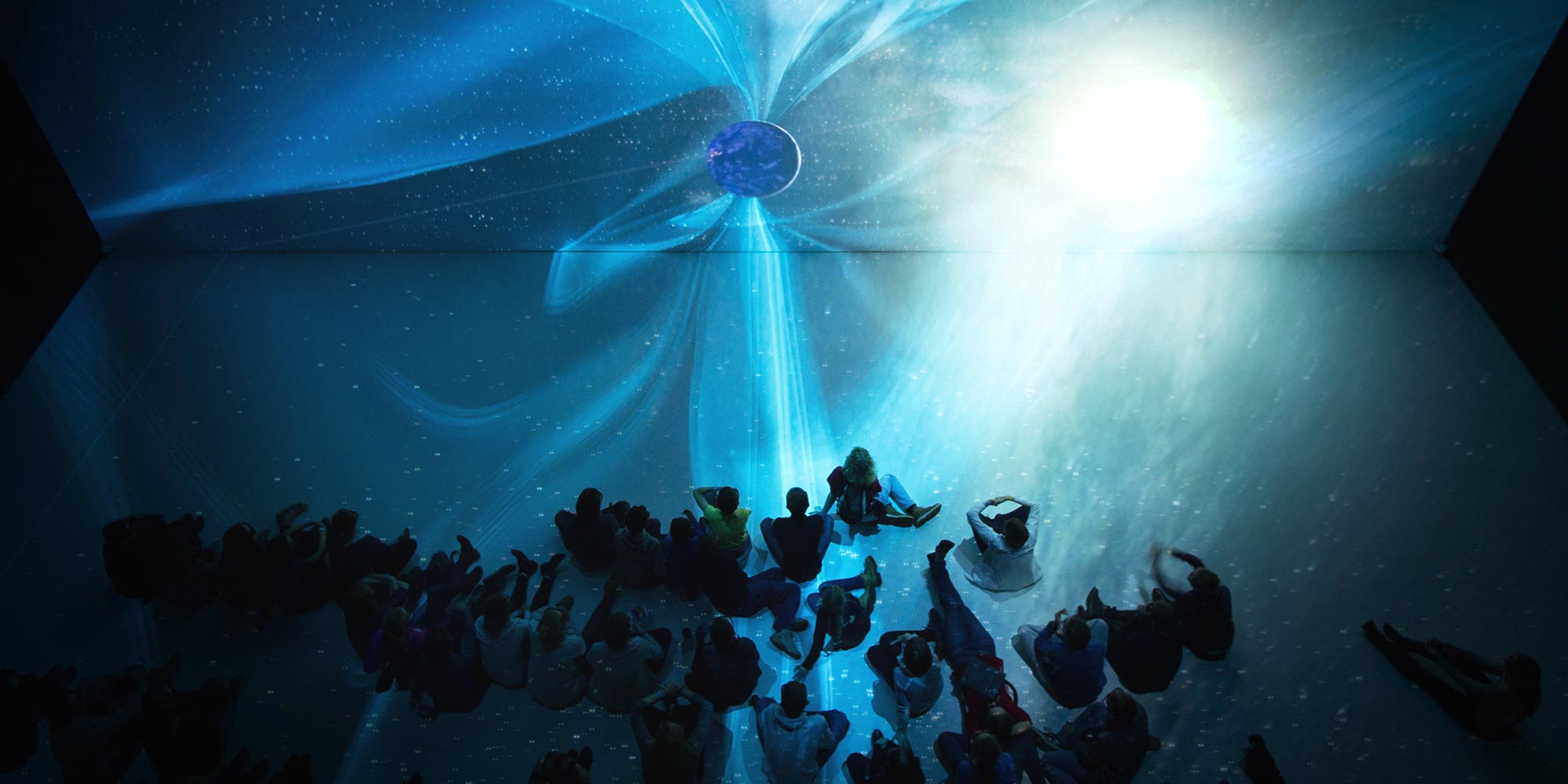 After more than 40 years the Voyager probes have visited all planets, left our solar system and revolutionized our idea of the universe with their measurements. Technology is changing the way we see the world we live in.
Uniview / SCISS, Credit: Ars Electronica / Christopher Sonnleitner 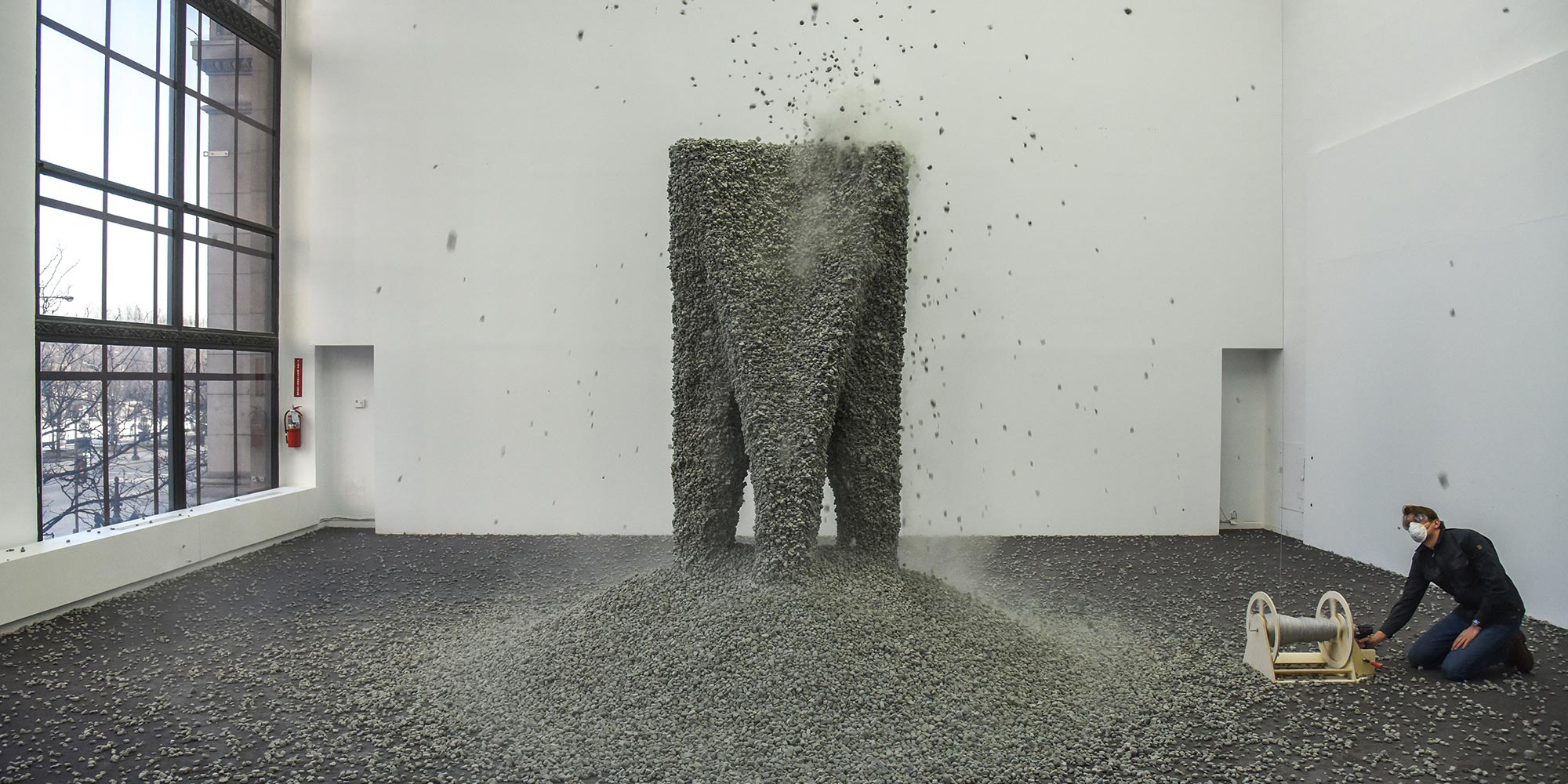 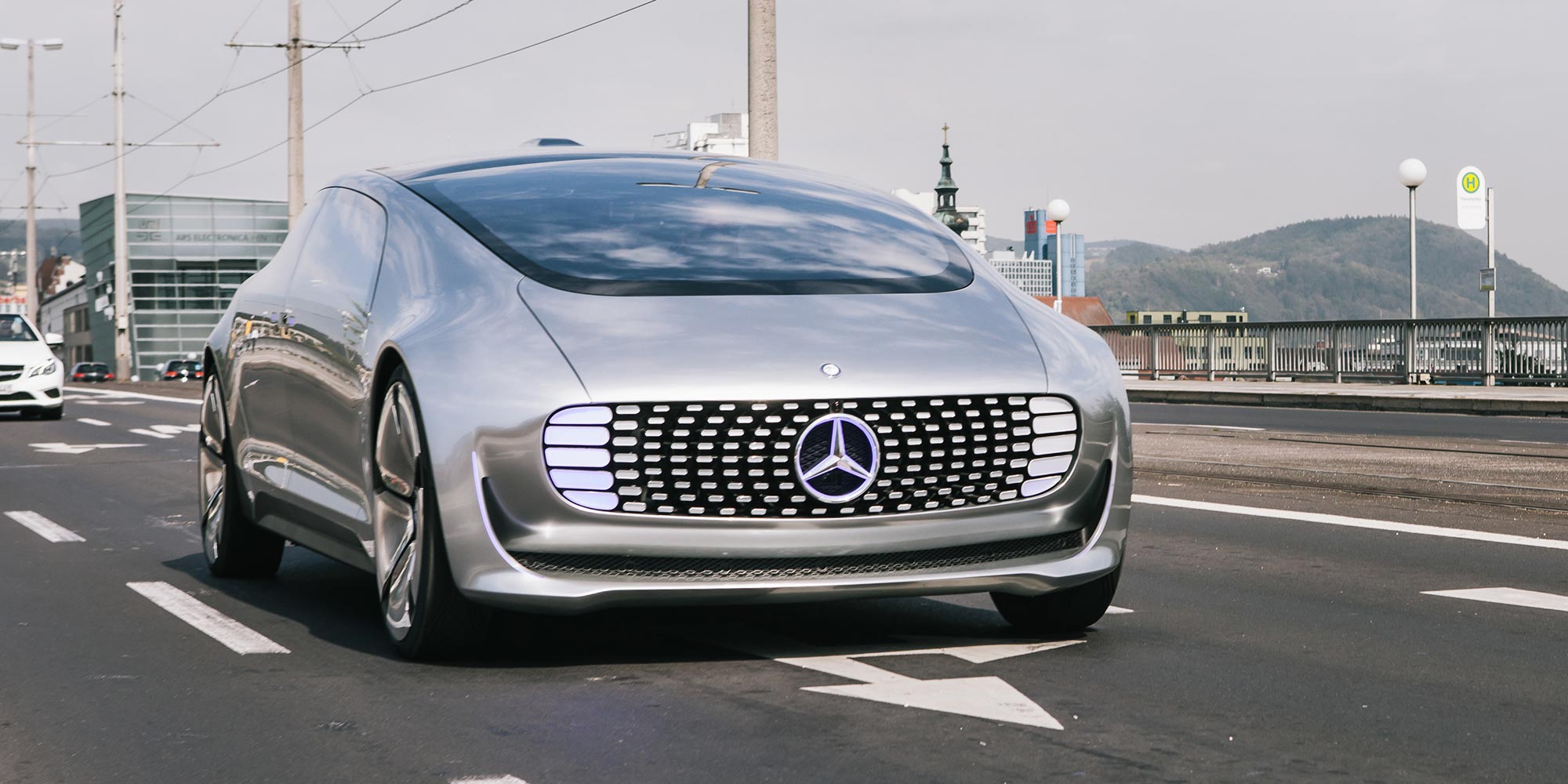 In the 20th century we built our cities for the status symbol car - but how will we live mobility in the 21st century? The Mercedes F015 makes its first rounds on Europe's roads in Linz, Austria.
Mercedes-Benz F 015, Credit: vog.photo
ZurückWeiter

For digital humanism. With Machine Learning and Co, we are initiating the transition from automation to autonomy today. The digital becomes independent for the first time. On the threshold of this new era, we must set the course for our digital society to remain committed to fundamental values such as human dignity, freedom, democracy, equality, the rule of law and human rights. Together with artists, scientists, developers, designers, entrepreneurs and activists from all over the world, we want to contribute to such a digital humanism. 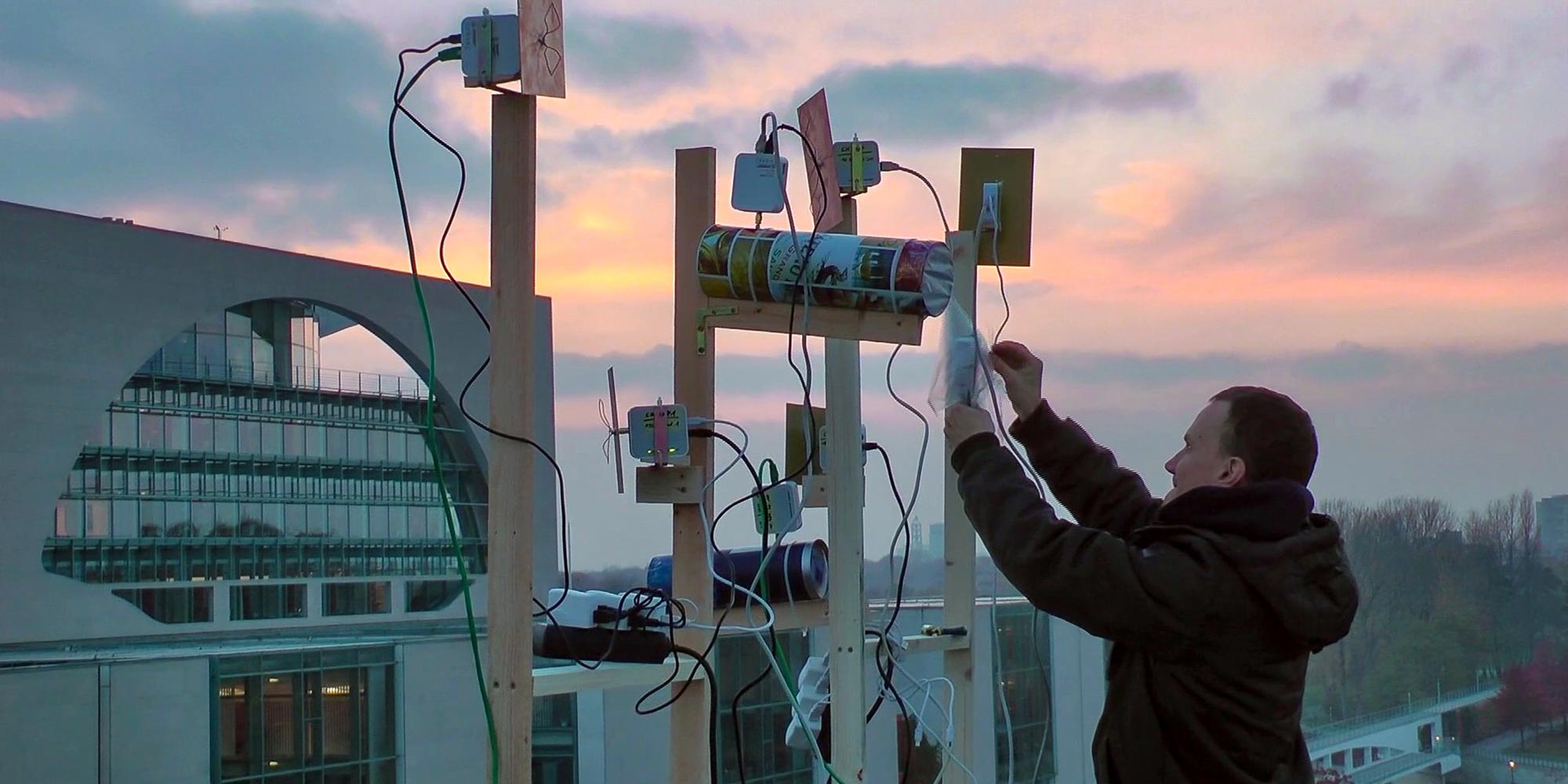 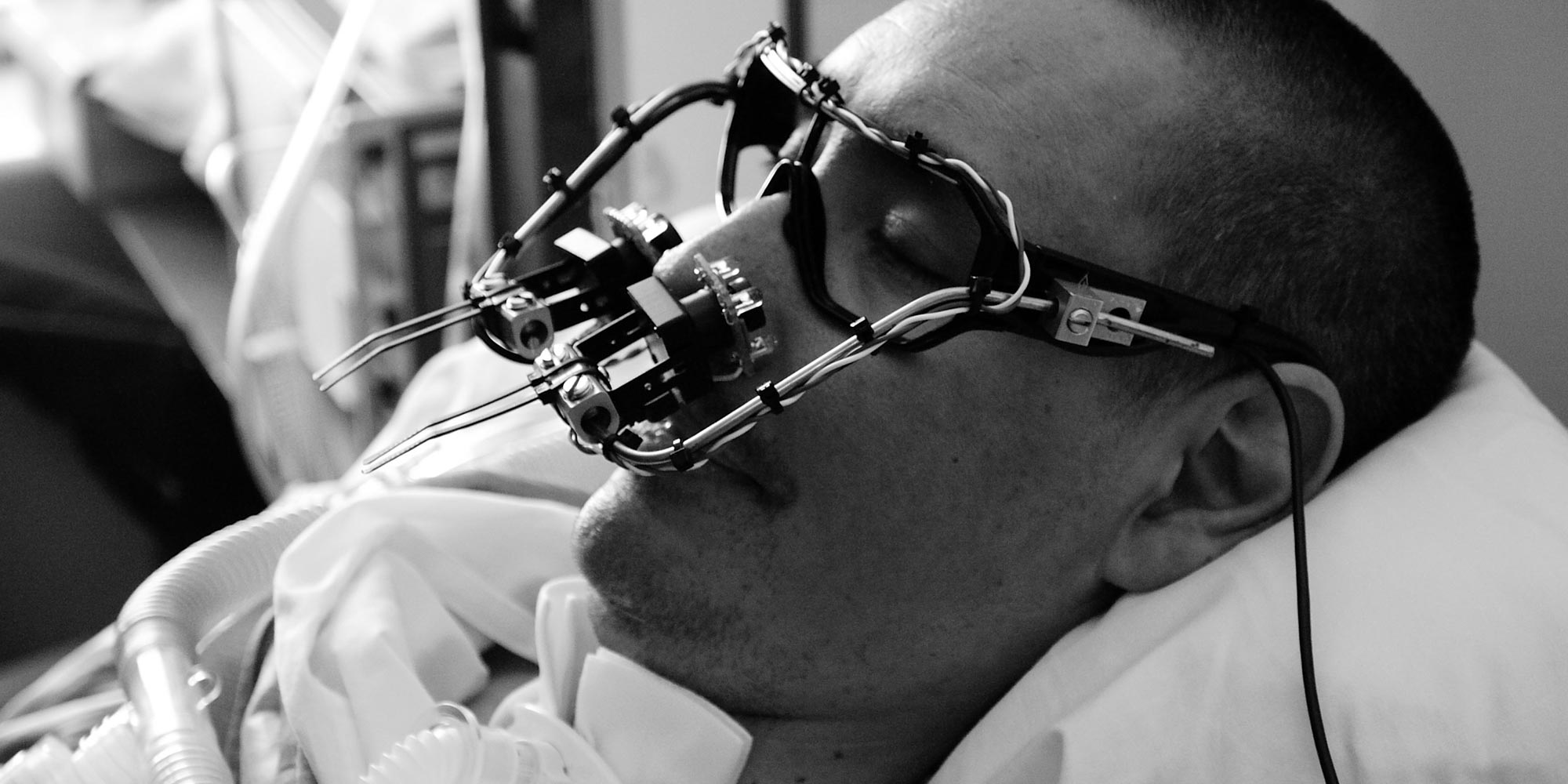 Technology is supposed to help us people. And not just to give corporations even more profit and regimes even more control. What strategies and alliances do we need to achieve this?
EyeWriter / Zach Lieberman, James Powderly, Tony Quan, Evan Roth, Chris Sugrue, Theo Watson, Credit: Lieberman / Powderly / Quan / Roth / Sugrue / Watson 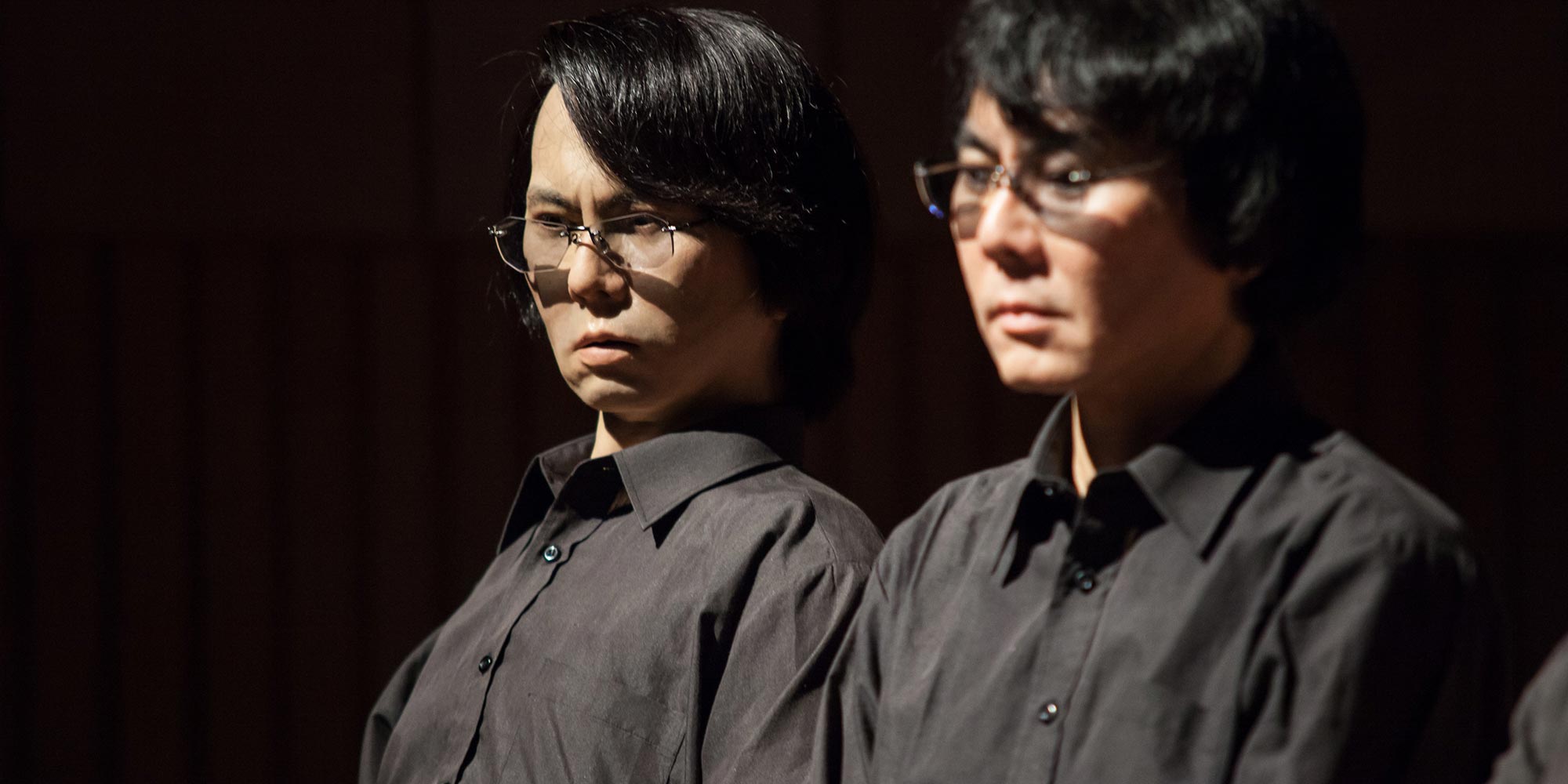 Long gone are the days when robots were bulky tin boxes. In the future we will ask ourselves more and more often whether our counterpart is a human being or a machine.
Geminoid HI-4 / Hiroshi Ishiguro, Credit: vog.photo 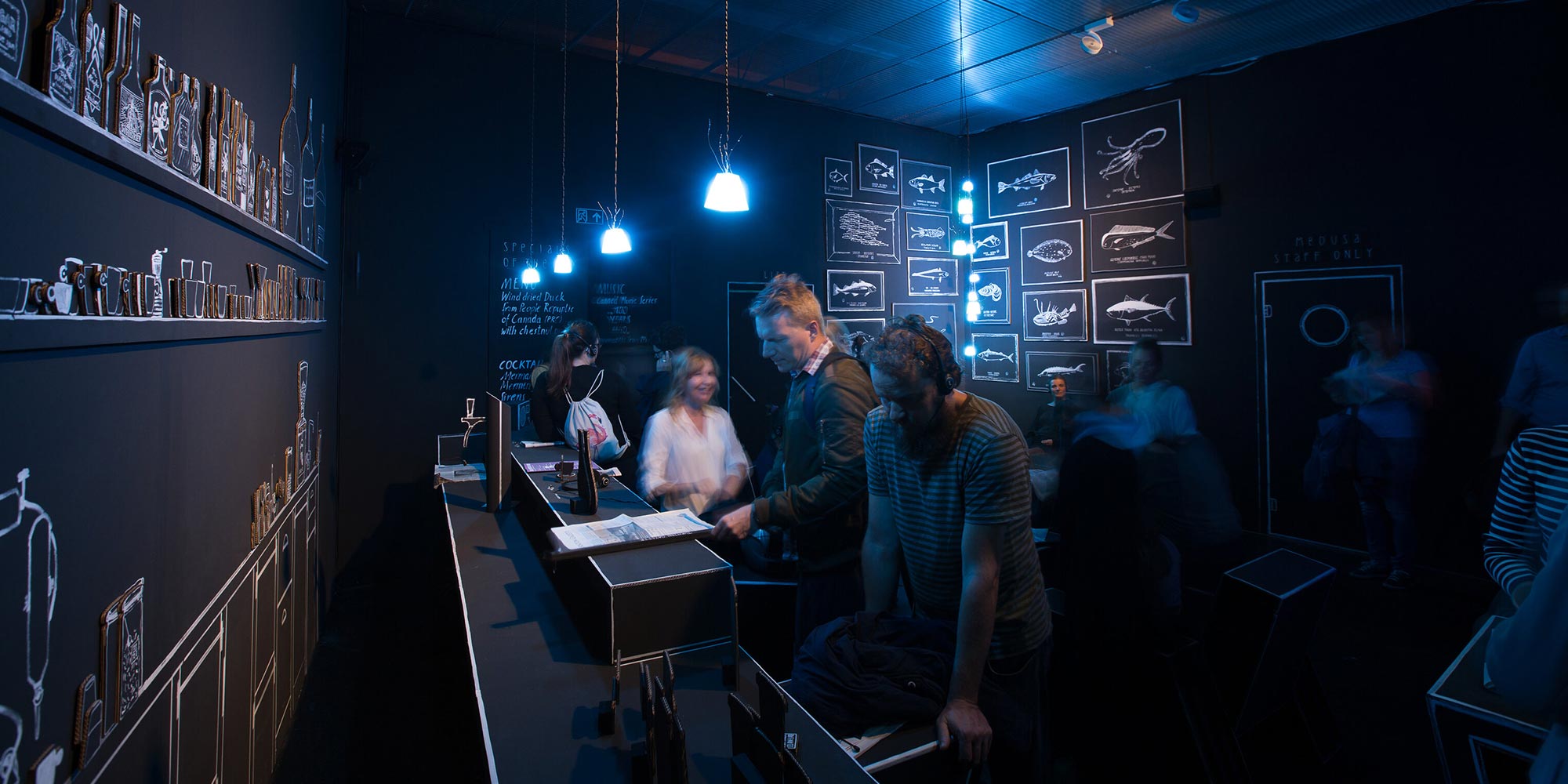 Artists create spaces and stories that deal with possible futures. They stimulate thought games and discussions and sharpen the awareness that our future depends on what we do today and what we don't do.
Turnton Docklands / Time’s Up, Credit: vog.photo
ZurückWeiter
Between art, technology and society. Over the past four decades, a number of pioneers have turned Ars Electronica into a creative ecosystem that now enjoys a worldwide reputation.  Since 1979 we celebrate once a year the Ars Electronica Festival. More than 1,000 artists, scientists, developers, designers, entrepreneurs and activists are coming to Linz, Austria, to address central questions of our future. For five days, everything revolves around groundbreaking ideas and grand visions, unusual prototypes and innovative collaborations, inspiring art and groundbreaking research, extraordinary performances and irritating interventions, touching sounds and rousing concerts. Since 1987 we have been awarding the Prix Ars Electronica every year. With several competition categories, we search for groundbreaking projects that revolve around questions of our digital society and rehearse the innovative use of technologies, promising strategies of collaboration and new forms of artistic expression. The best submissions will receive a Golden Nica, considered by the global media art scene to be the most traditional and prestigious award ever.  Since 1996 we have been working at the Ars Electronica Center year after year with tens of thousands of kindergarten children, pupils, apprentices and students on questions concerning the ever-increasing digitalization of our world. The focus is on the potential of the next Game Changer: Artificial Intelligence.   Also since 1996 we operate the Ars Electronica Futurelab, whose international and interdisciplinary team of artists and scientists is researching the future. With interactive scenarios, we prepare central aspects of the Digital Revolution for the general public in order to initiate a democratic discourse.   1998 we initiated create your world. The year-round programme is developed together with young people and includes a competition for under 19 year olds, a festival of its own and a tour through the region. We see create your world as an invitation and challenge at the same time and want to encourage young people to leave the role as mere users of technology behind, to discover new possibilities of acting and designing and to implement their own ideas.  2004 we started Ars Electronica Export with a big exhibition in New York. Since then we have been to Abuja, Athens, Bangkok, Beijing, Berlin, Bilbao, Brussels, Buenos Aires, Doha, Florence, Kiev, London, Madrid, Mexico City, Moscow, Mumbai, Osaka, Sao Paulo, Seoul, Shanghai, Singapore, Tokyo, Tunis, Venice and Zaragoza. Together with partners from art and culture, science and education, business and industry, we organize exhibitions and presentations, conferences and workshops, performances and interventions at all these locations.  Since 2013 our team at Ars Electronica Solutions has been developing market-ready products inspired by visions and prototypes from the artistic cosmos of Ars Electronica. We develop innovative, individual and interactive products and services for exhibitions, brands, trade fairs and events.  Since 2016 we are active all year round in Japan. Especially in Tokyo and Osaka we work together with leading Japanese universities, museums and companies, develop and present artistic projects, design workshop series and Open Labs and dedicate ourselves to the future of our digital society in conferences. In order to actively shape the digital revolution, people are needed who have a feel for change and recognize connections, develop new strategies and set a course. This is precisely where the 2019 created Future Thinking School aims to support companies and institutions.  Whether at home in the living room or in the office, whether in the classroom or in the lecture hall, in the streetcar or subway, on the train – from everywhere Home Delivery accompanies our virtual visitors on an artistic-scientific journey into our future since 2020.  All our activities since September 18, 1979 have been documented in the form of texts, images and videos and stored in the Ars Electronica Archive. This archive provides us with a unique collection of descriptions and documentations of more than 75,000 projects from four decades of Ars Electronica.

for Art, Technology and Society 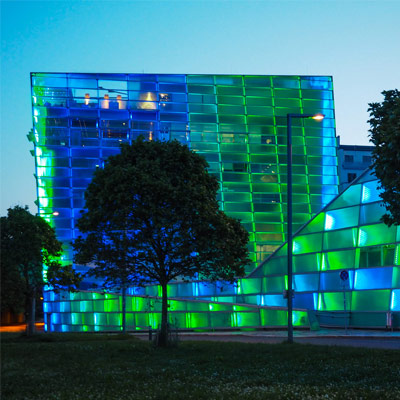 Laboratory and Studio for Future Concepts

Future Visions of the Next Generation 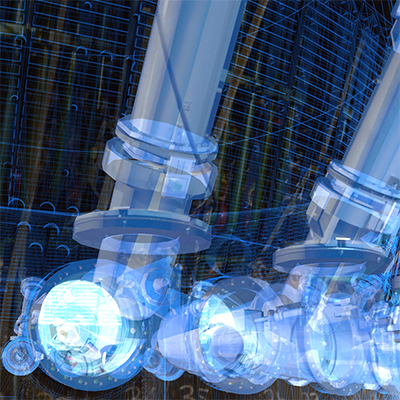 Innovative Applications for the Market 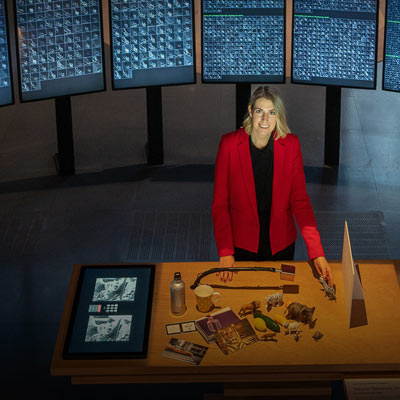 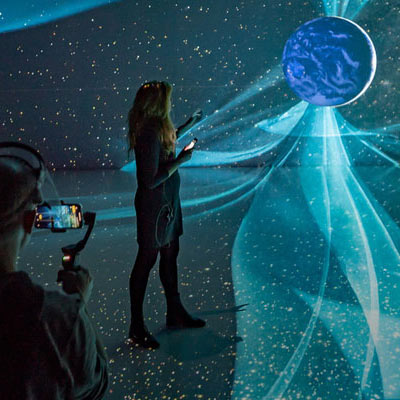 We come to you!