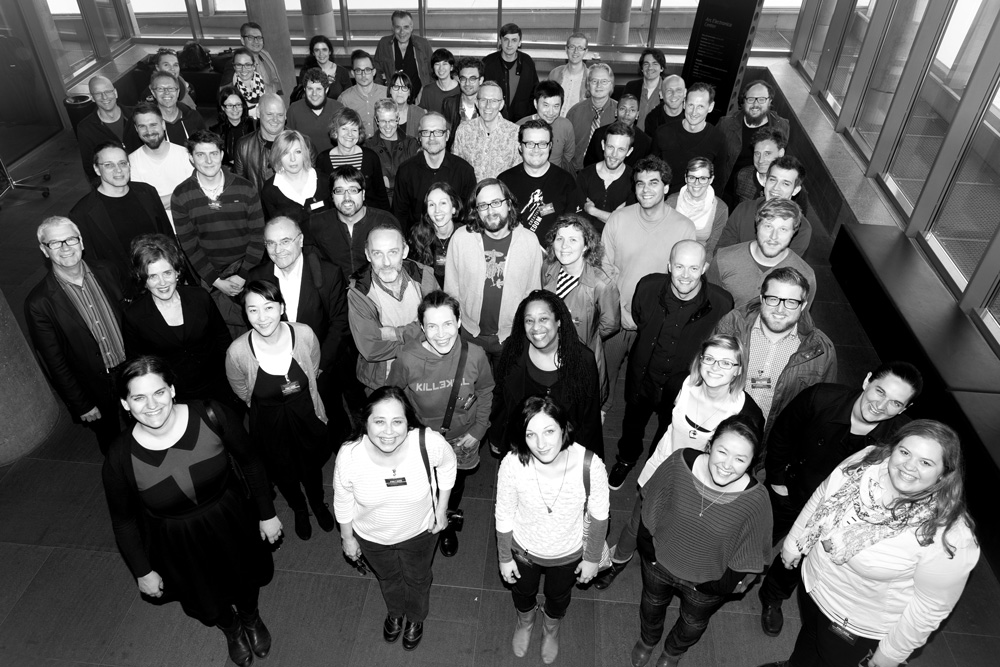 Since 1987, the Prix Ars Electronica has been one of the most prestigious prizes awarded in the world of media art. The process of deciding which works are singled out for recognition is quite elaborate. After all, there are thousands of submissions to evaluate in order to finally arrive at the most excellent and most interesting ones. Needless to say, these deliberations are not carried out by one individual. There are many people involved—beginning with Ars Electronica staffers who perform preliminary assessments to narrow down the field to a manageable number. This rather lengthy shortlist of promising candidates is then turned over to the Prix jurors.

Thus, even before the members of the Prix jury get busy with the job at hand, quite a few things have already happened. Artists from all over the world have entered their works via the online platform (http://prix.aec.at), submitted videos, photos and documentation, as well as entered all the required information to the Prix databank. Ars Electronica staffers administer this Prix databank; in fact, this is the same crew in charge of producing the Festival—which makes a lot of sense when you consider that the Festival and the Prix should ideally be reciprocally inspired. The submissions are checked for completeness; if info is unclear, the artists are contacted. And the beat goes on … 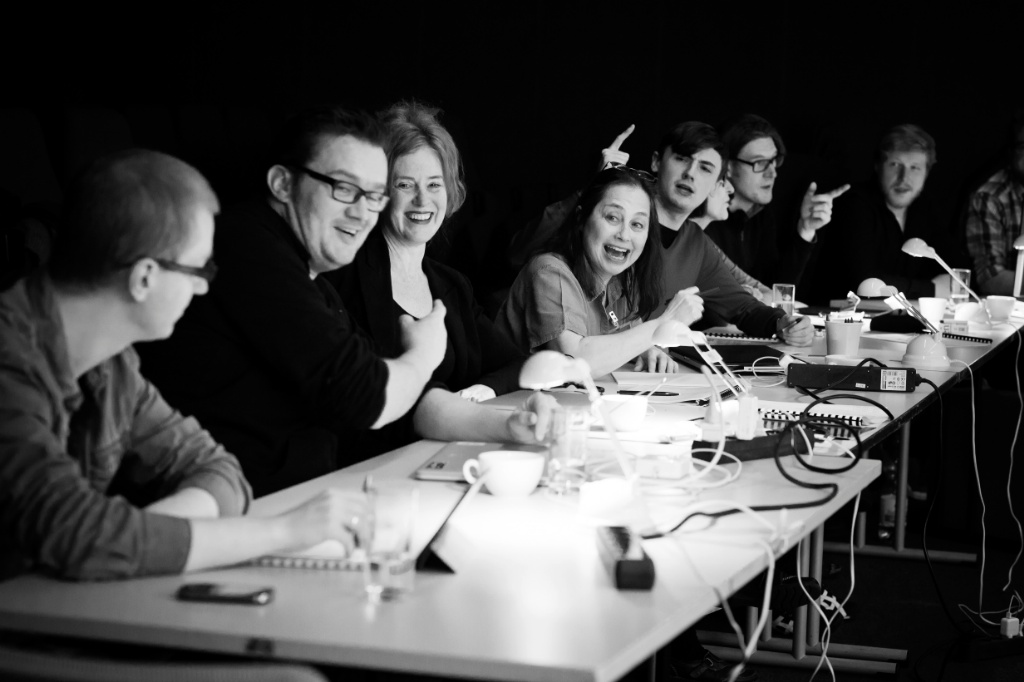 Once the entry deadline is past, it’s time to scrutinize the material. It takes about a week to do the preliminary assessment, selecting the works that could possibly garner a Golden Nica or an Award of Distinction, and taking care of business to make life easier for the Prix juries—solving technical problems, filling information gaps, and lots of other everyday tasks like making travel arrangements for the jurors. As far as the logistics are concerned, this is by no means a piece of cake. If you want to watch really motivated people hard at work some time, then visit Festival headquarters during this phase.

But the most interesting part of the process is the weekend when all the jurors in the respective categories convene in Linz for exploratory investigations, discussions and, occasionally, disputes. The mission: to award seven Golden Nicas, one each to the most outstanding work in each category. The judging is done by five persons per category. The atmosphere prevailing during this weekend resembles that of a class trip, except that most jurors are complete strangers until they meet in Linz. 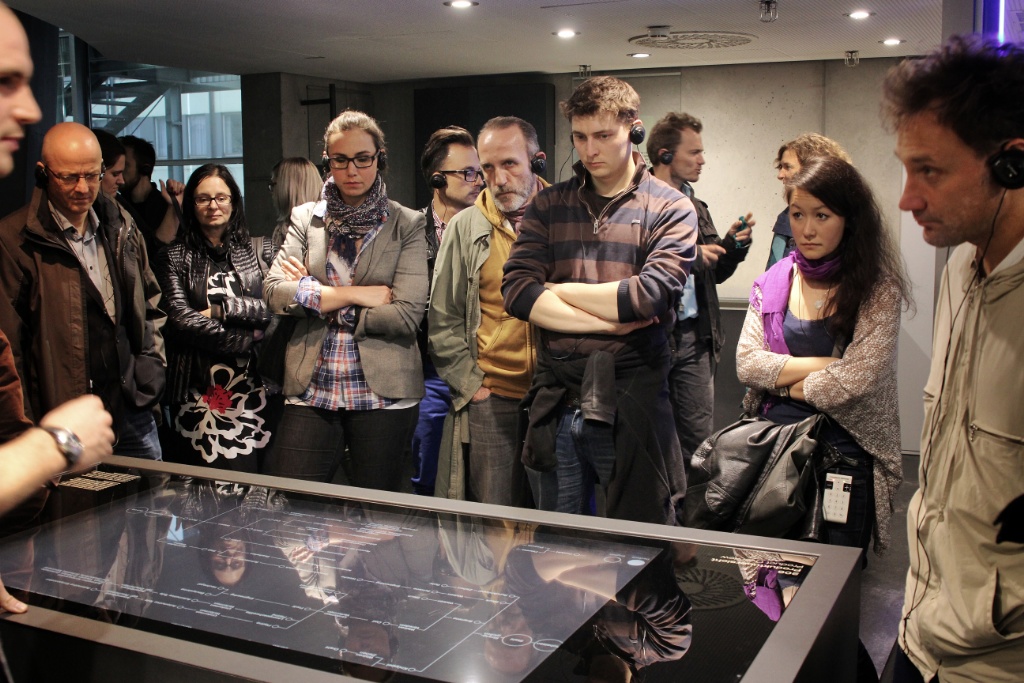 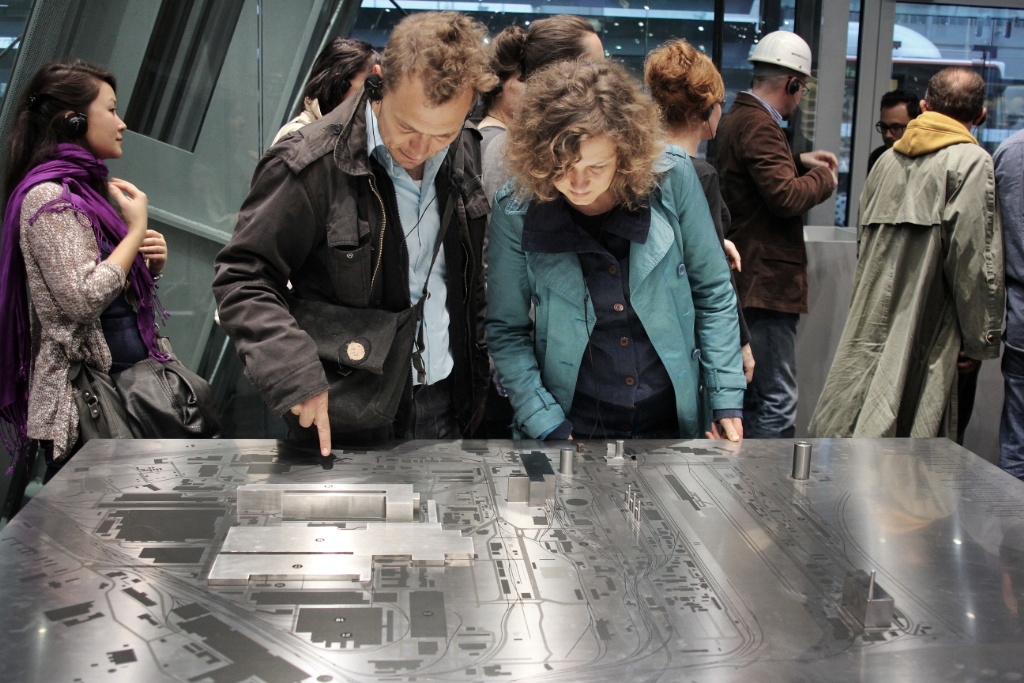 And there actually is quite a bit of time to get acquainted. I mean, the deliberations take three whole days, during which the jurors have lunch and dinner together. During these three days, the jurors are dealing with the Prix and its context pretty much around the clock. Thus, the decision-making process is characterized by thoroughness. This isn’t some quickie, slapdash deal; the submissions are discussed at length, each one receiving the attention it deserves. And even if, in the end, only one goes home with the grand prize, having made it this far is itself a hallmark of quality.

Jeff Mills (US), one of the inventors of techno, and Pamela Z (US), performer and composer, Digital Musics 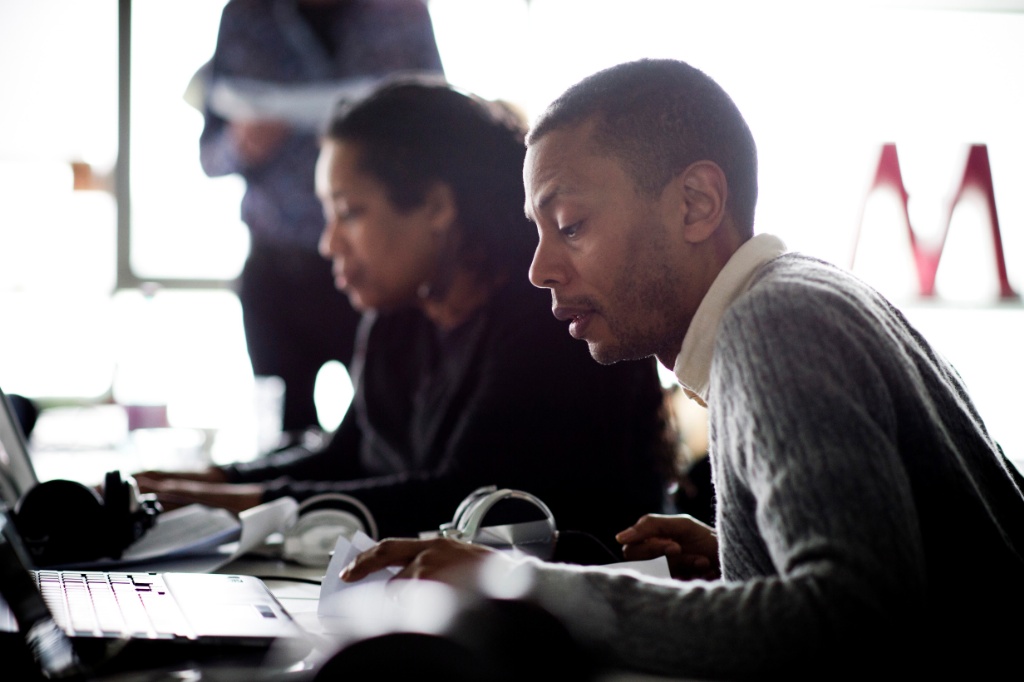 The sessions themselves are secret. The only ones in the room are the particular category’s jurors and one or two Ars Electronica staffers assigned to assist them.

What, actually, is the jury looking for, you might ask?

In each category, there are various criteria of greater or lesser importance. Christine Schöpf and Jürgen Hagler go into detail about this in the following article—for example, how this works in Computer Animation, where technical criteria play a major role but content-related components are almost always decisive. In categories such as Hybrid Art and Digital Communities that are defined primarily in terms of substantive framework conditions, on the other hand, the decision-making process is a little different. Nevertheless, in each category, judging is essentially a matter of discovering the work that makes the greatest impact in its respective field, that unfolds the greatest influence and that transports the most powerful message.

Obviously, the answers to these questions also strongly depend on the individual jurors, on the person’s experiences and views, and this is exactly what adds zing to the decision-making process. Musicians from across the genre spectrum jam with musicologists, activists enjoy close encounters with sci-fi authors, divergent perspectives collide, and in the end you can be sure that the projects singled out for recognition are of outstanding quality. Because they aren’t considered from just one point of view but rather from multiple perspectives, and they address all sorts of people in a wide variety of ways, and their priorities aren’t put on boundaries or framework conditions but rather on content, on the message and selecting the path that best conveys that message. 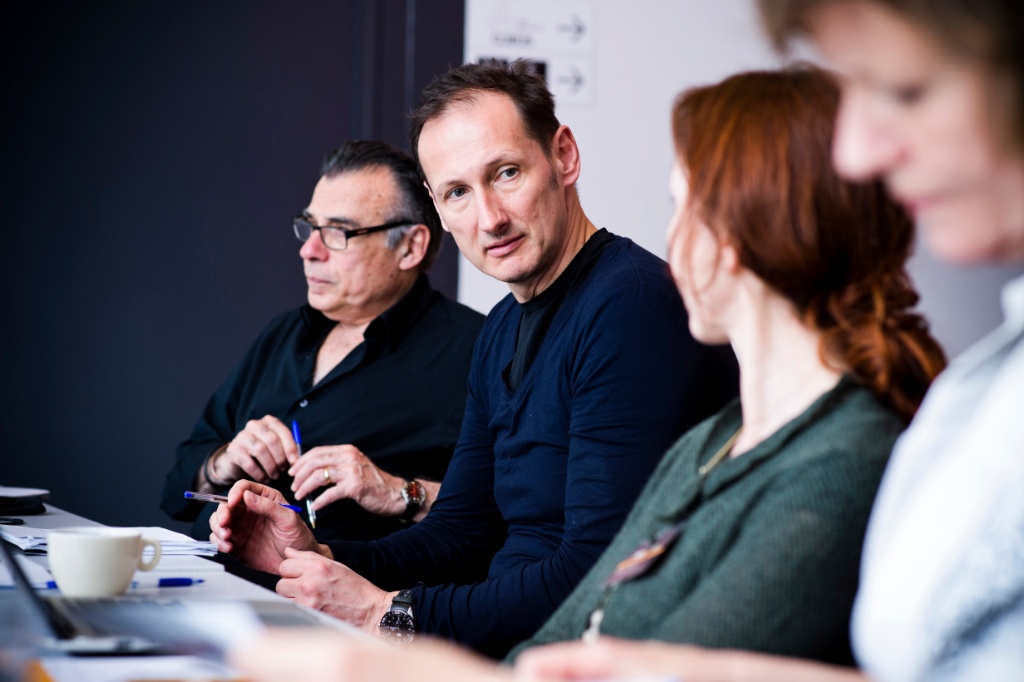 The juries convene from Friday morning until Sunday afternoon, when the Golden Nicas and Awards of Distinction are presented internally. In doing so, each jury has to justify its choices and explain precisely why it chose to honor the projects that it did. And here as well, despite the fact that many are rather drained by the weekend’s exertions, this turns out to be yet another opportunity for more or less heated discussions of what has transpired. Interest in the other categories’ outcomes is great too.

At last, the weekend’s proceedings have been concluded, the jurors have hit the road or are headed for their home airspace. But the work’s not over yet. Each participant has to compose a statement about the prizewinning works. These statements will be published in the CyberArts catalog and elsewhere. 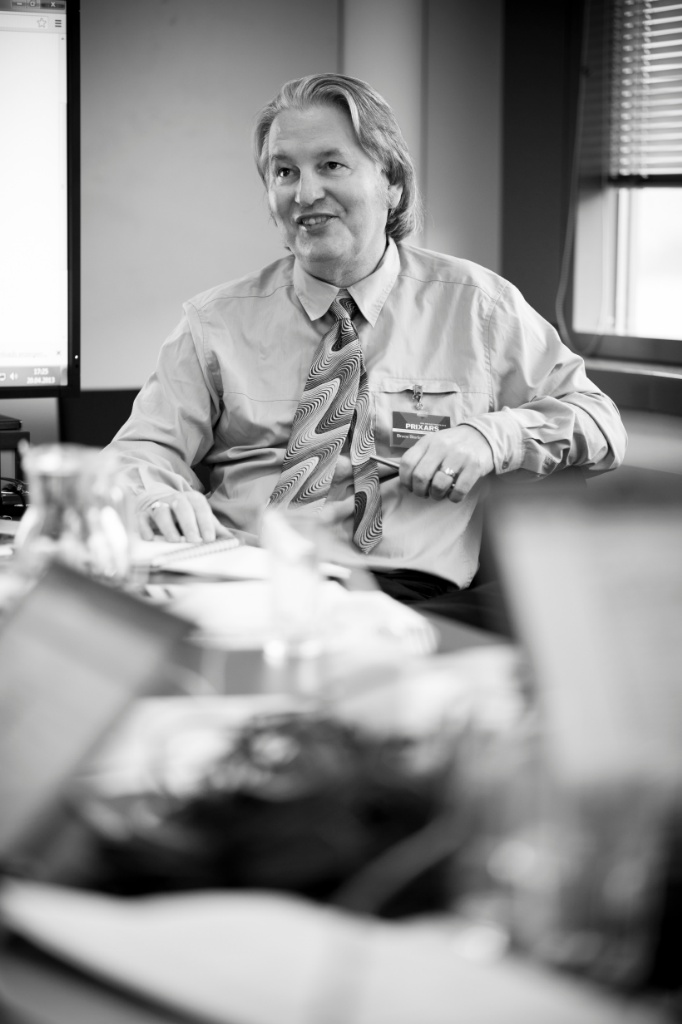 Ars Electronica’s staff has its work cut out for it too—notifying the winners and ironing out the legal details. It’s not too soon to start organizing each artist’s trip to the Festival either. The installations also have to make their way to Linz in order to be showcased at the CyberArts exhibition during the Festival. And much, much more.

The general public will find out about this year’s prizewinners in the middle of May. The press conference will be broadcast live and reported via Twitter.

The jury weekend is over; the Prix is just shifting into high gear!

Thank you to all judges and the Festival-team of Ars Electronica for making this weekend happen!