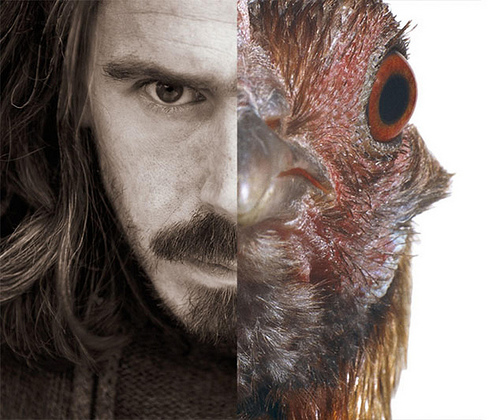 The Cosmopolitan Chicken Project bei Koen Vanmechelen is one of the centerpieces of the CyberArts 2013. By crossbreeding different races of chickens, he’s creating a metaphor for our society and our human race. We have met Koen to talk about what can be expected during TOTAL RECALL The Evolution of Memory.

What can we expect from the Cosmopolitan Chicken Project in Linz, what are we going to see?

I’m really glad to be able to show a certain library, that’s one point, you see the bio-library of it, but you can also face the intellectual library. For more than 5 years now we have been doing the genetic research, and we will showcase this research, showing videos of meetings with scientists, where we control the immunity-system of the hybrid-chicken, where we’re doing research.

That’s very important, because after 5 years of doing the research on diversity, on immunity, on fertility, scientists saw that the diversity is growing enormously. And I’m very happy, because philosophically my work is based on biodiversity, when we cross, we become richer, in knowledge, discovering new things out of new combinations, and scientists can underline this.

And that’s great, because the immunity went up, it doubled, the chickens became stronger, I have chickens that are growing as old as 14 years. At the beginnings, when you take pure races, that’s maybe 4 or 5 years, so those kind of numbers are very impressive.

In the beginning I had a fertility-rate of 30%, now it’s 92%, that’s massive. Of course we are not focused on consumption.

You will also be confronted with an object, which is called “Natural Knowledge”, which is a combination of books published about immunity, fertility and diversity, and I will make a combination with the encyclopaedia of human rights. So you will see the combination of Human Rights and the Cosmopolitan Chicken Project.

I think this will be a piece that is going to be central for the exhibition, you will discover the library of knowledge, of science, of culture, and then be confronted with the living animal. 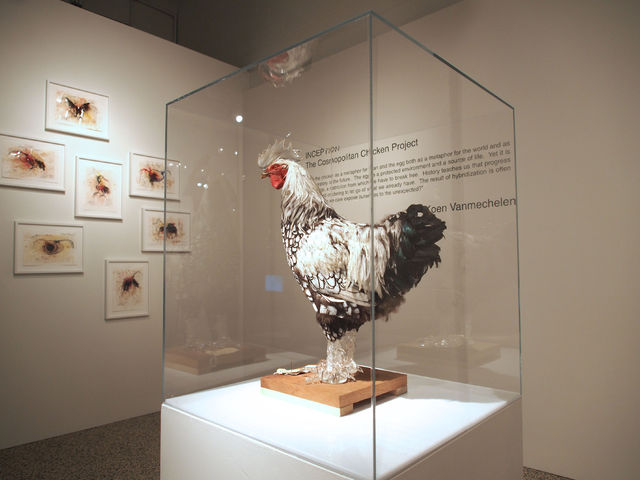 So the chicken is going to live in the exhibition?

Yes, exactly, for the duration of the exhibition, which is 14 days. Then it’s going to go to another spot in the world.

And of course the chicken is only the starting point for the discussion of all the big issues we have today. It’s a very simple idea.

When I give ectures and I start talking about the Cosmopolitan Chicken Project and I show the images, everybody starts to laugh, but after a couple of minutes, people start to realize that there’s more going on here. A very important point for me is that in the beginning of the project, I didn’t see the chicken, I saw the strong thing behind it. Once you discover, that there’s only one chicken in the world, and that because of human interest it has travelled all over the world and that in every chicken there’s the story of a country, then you start to realize that it is a sculpture, that is carrying the oldest cultures.

The French have developed a chicken that has the color of the French flag, the Chinese produce silk, so they have chicken with hair. It’s directly related to the culture, the Americans make the biggest chickens in the world. All these things are cultural translations, we create a mirror of ourselves, and what we have in common with the chicken is that we are successful, of course nobody knows for how long, but we also adapt to every environment. The chicken does the same, you can go to the Northpole and find chicken, and still it’s only one chicken, it stays a chicken. If you talk about humans, we are still humans.

There are a lot of people who think that if you talk about an African or a Chinese, that those are two different things, but of course it’s not.

This is what I like about the project, it gives us a view on what we are. Those chickens, no matter what we do, it is an imprint of our ideas, but it stays a chicken.

If you talk about races, human as a race, chicken as a race, all those different other groups, all those things that have been created in an environment, it is a very strong metaphor.

The combination of things, of chickens, of all the different things we have in our world, I really think that the combination is the secret. If you think of how your body is constructed, the left part of the brain taking care of the right one and vice versa, the cross-movement, if I was the inventor, I could never think about it. You’re a crossing in yourself. If someone ask me to create a human, I would go for right-right and left-left, very simple, but that’s not true.

Coming back to Linz, one last question: Is there a way to pinpoint of Austrian Chicken genome in the current generation of the Cosmopolitan Chicken Project?

Well, it’s hard to say, I am still waiting for an invitation for crossbreeding in Austria. So the one chicken in the exhibition will maybe get out there, knock on doors and ask for possibilities.

The Cosmopolitan Chicken Project will be part of the CyberArts 2013 – exhibition, starting at September 5th in the OK Offenes Kulturhaus im OÖ Kulturquartier in Linz. Check out the other projects at ars.electronica.art/totalrecall.