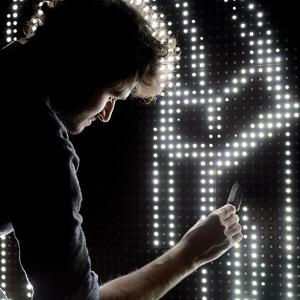 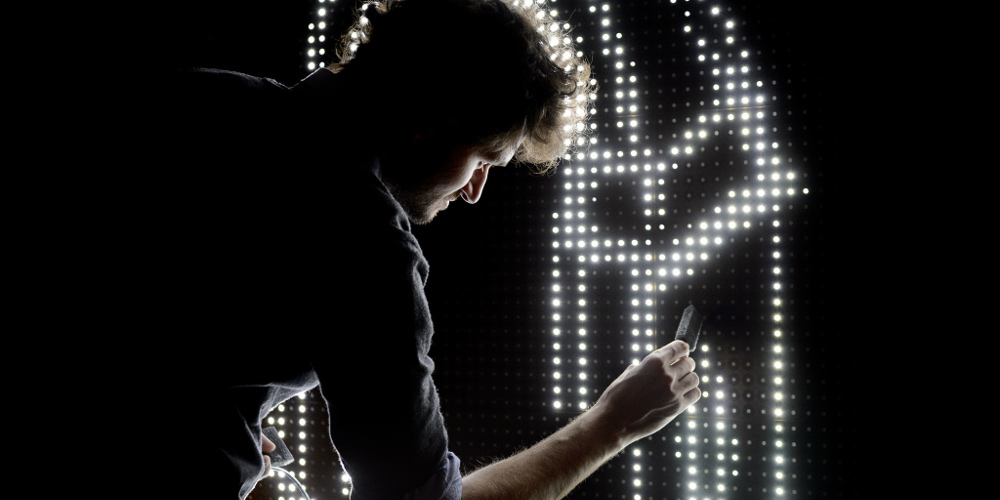 A sponge, brush or water pistol and some water – that’s all it takes to conjure up Water Light Graffiti on a wall studded with thousands of water-sensitive LEDs. The principle is simple; the results are a feast for the eyes.

The water produces an electrical bridge that enables current to flow between the LEDs mounted in a wall panel. The quantity of water also determines how intensively the respective LEDs light up – the more liquid that comes into play, the brighter the rapidly blinking graffito is illuminated.

Have you previously sprayed “classical” graffiti with colour on walls?

Antonin Fourneau: I was fascinated by the spray paint during my art study; I had a whole stock in my home. But I usually used them to realise visuals with stencil on objects. Once I tried graffiti on a wall, but I was ashamed of the result. Then I made graffiti in the basement of my parent’s home. This was a little better, but I am not comfortable with the fact training myself in public space and ultimately transform the wall into a pretty ugly mural. I trained more often on removable surfaces without really move to act on a wall. I believe than Water Light Graffiti (WLG) merges my desire of a training surface for graffiti.

What delight you to paint graffiti?

Antonin Fourneau: It may be ashamed to admit, but I’m far to be an expert on graffiti. I like to watch other graffiti sprayer and I especially appreciate those who always break the graffiti practice and I’m fascinated by artists that go beyond the graffiti and completely acting and gamify the urban space. People like Invaders of course, Aram Bartholl with Dead Drops or projects like the Robo Rainbow from the Swedish street artist Akay. I think we are dreaming a lot of sci-fi graffitis, like the graffiti machine in Demolition Man.

How did you come up with the idea to expand graffiti and paint with water on LED?

Antonin Fourneau: I was in China and observed a man painting the floor with a brush and water to practice calligraphy. I asked myself if we could do this on a more poetic surface than this giant billboard.

Even before the WLG project I often use water to interact. It’s a pretty fascinating and dynamic material. In 2009 I made a prototype of a dental prosthesis with LEDs, where the contact with the tongue triggered the brightness of the LED-teeth. I had the idea to create a kind of denture to produce visual Morse codes. In another older project I used water in sushi by testing the electrical resistance with metal chopstick as a trigger for different melodies during a Japanese dinner.

Antonin Fourneau: WLG was already in many cities in France: Poitiers, Paris, Nantes, Rennes, Toulouse, Cergy, Aix-en-Provence, Metz, Reims, Tourcoing and Lyon. It also was in US cities, like Las Vegas, Chicago and New York. In Europe it was in Kosice, Rotterdam, La Haye, Amsterdam, Eindhoven, Barcelona, London and Cully. It also was in Singapore, Abu Dhabi, Toronto and Casablanca.

Next cities are Riga, Cascais, Chartres, Besançon, Abu Dhabi, Dubai, Tunis and of course Linz at the 2014 Ars Electronica Festival.

Will there be a performance at the opening of the Ars Electronica Festival 2014?

Antonin Fourneau: WLG is a piece daily performed by the audience in any case. The nickname of my installation is “the mosquito trap” because in most of the exhibitions we did, a lot of people were catched by the glow effect and very quickly we have a line of people fixed in front of the wall.

Personally I’m more the creator of a new cool big toy, like the guy who created the Etch a sketch, but not actually a great performer of my own creation. But I’m always fascinated to create a context of interaction with a large audience. It’s the large part of my motivation to create something new. 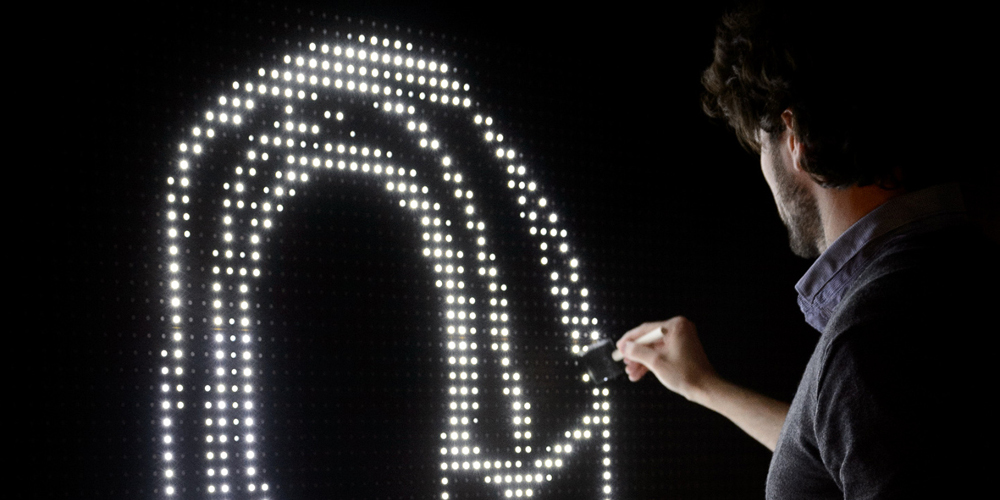 How long is a graffiti visible on the LED?

Antonin Fourneau: It depends of the air condition, but in general around 5 minutes without drying.

In Singapore it was really cool because the weather changed often during the day and the fog just after the sun was beautiful, because it was possible to see the fog cloud pass through the wall.

How much water can the LED bear? Did ever break something, because too much water was used?

Antonin Fourneau: No worries with a lot of water. It just needs a bit longer to dry. During an exhibition we have a lot of people who want to test it and so they throw a lot of water on it, but it didn’t break down yet.

The feeling, when you throw a bucket of water on the totally black wall and triggering the surface with the shape of a glowing splash is amazing. It should be the final for every opening performance.

What happens if it rains?

Antonin Fourneau: The wall is full triggered at the middle of the luminosity for each led. And when a drop of water touches the sensor around the LED it turns on in full luminosity for a short time. I call this the Matrix effect.

But the interaction with the audience is limited if the wall has no roof during a rainy day. My desire in the future is effectively to create a material for architectures that are able to interact with the weather.

Water Light Graffiti is part of your research project. Where can such water-sensitive materials be used in addition?

Antonin Fourneau: I currently develop a new pretty cool project; a sort of big water iPad. And for a famous brand I made a perfume tester with this technology.

Who wants to see this wonderful play of colors with his or her own eyes and even wants to paint with water on the LED screen on his- or herself, can do so at Domplatz Linz next to Mariendom (St Mary’s Cathedral) from THU September 4 to SUN September 7 2014, 8:30 PM – 11 PM.