A Behind-the-Scenes Look at the Spaxels 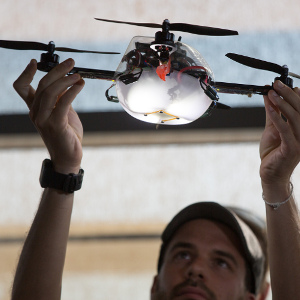 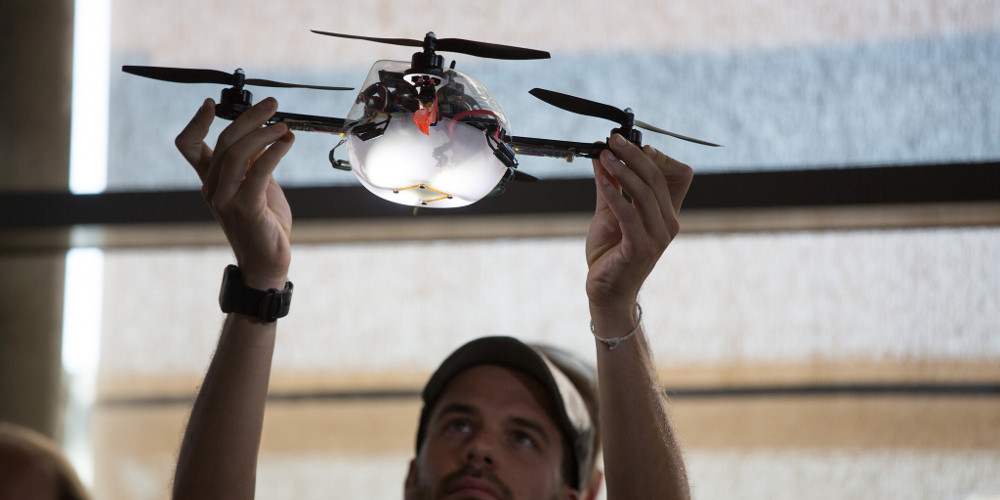 Ars Electronica Futurelab staffers have been doing R&D since 2012 on what they’ve dubbed Spaxels (space pixels)—a swarm of LED-equipped quadcopters that can fly in precise formation and thus “draw” three-dimensional images in midair. At the Spaxels Concept Demo being staged at the Future Playground during the 2014 Ars Electronica Festival, members of the spaxels crew will go into detail about what makes the swarm work and illustrate what they’ve achieved to date.

We recently met up with three crew members, Horst Hörtner, Chris Bruckmayr and Andreas Jalsovec, to find out what they’ve got planned at the their demonstration. 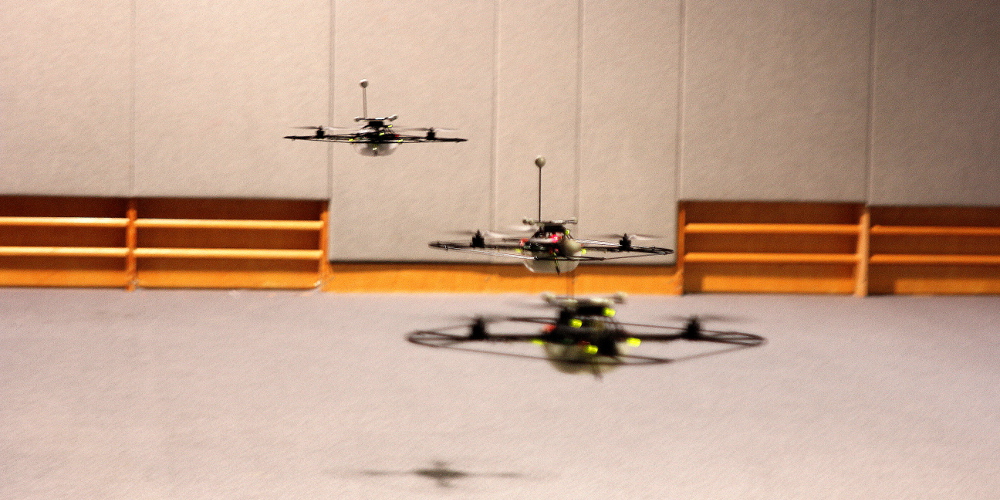 So, give us an overview of what’s on tap at the Spaxels Concept Demo.

Horst Hörtner: For starters, Andreas and Chris will present the spaxels concept. They’ll go into the history of the project and what it’s all about—substantively, conceptually and artistically.

In the second part, we’ll give an intro to direct interaction with the drones. We’ll be working with gesture control that the drones react to.

The third part is the direct interaction. You make gestures directed at the drones, you move them with your hands, and the other drones react to that. So, this is a matter of swarm behavior—or rather, interacting with an object formed by the swarm.

And with that we’ll provide some insights into the directions our current spaxels R&D is proceeding in and we’ll display some prototypes we’re working on at the moment. This will all take place during the Ars Electronica Festival, Friday to Sunday, September 5-7, daily at 11 AM and 5 PM, and on Monday, September 8th at 11 AM.

Andreas Jalsovec: The three segments are always in sequence. We start with a general overview; then we’ll present two games developed in conjunction with the CADET [Center for Advances in Digital Entertainment Technologies] R&D project; and then it’s time for the so-called Smart Atoms.

Horst Hörtner: CADET is a three-year R&D project we’re working on jointly with the Salzburg University of Applied Sciences, and here we’ll present some of the results – especially in connection with gesture control of the spaxels. 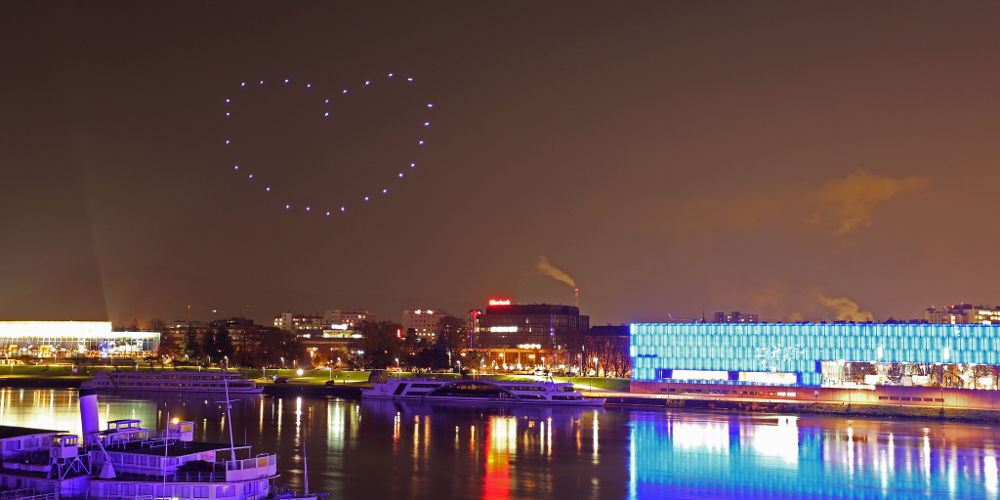 What will you be doing in the first part, the spaxels presentations?

Andreas Jalsovec: The first item on the agenda is explaining the spaxels concept. We start with an indoor flight. Three drones—i.e. a three-unit swarm—will fly to the soundtrack of our Futurelab colleague Michael Mayr and we’ll go into the rudiments of the spaxels concept, or actually the basic idea, since they usually fly outdoors. Then we’ll give a bit of historical background—from the initial concept of the spaxels that Horst introduced at the 2012 Klangwolke to all the shows we’ve performed in to date including, most recently, Sharjah in the United Arab Emirates, which was our last outdoor performance. We’ll also give a brief look behind the scenes at the latest test in Krailling, Germany, where we recently conducted our first test with 60 drones.

Chris Bruckmayr: The point of the first part is to explain exactly what a spaxel is and to elaborate on the media art concept behind it—namely, installing programmable lights on drones that can fly in a swarm and thus produce a dynamic display in midair. We’ll demonstrate this by screening a short film including sequences from various shows and experiments we’ve conducted. Then we’ll go into the latest tests we ran in July with Daimler, the two CADET games, which brings us to the indoor flights with interaction. 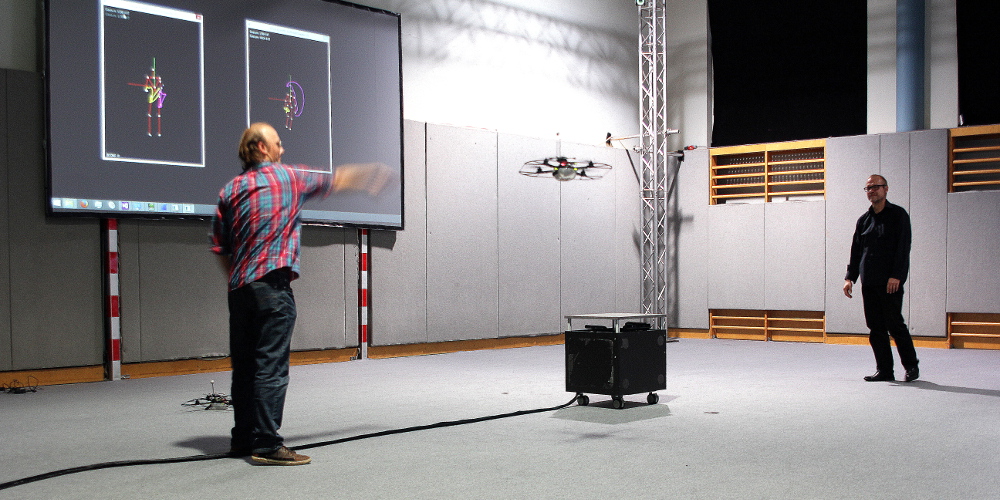 Tell us a little about the two CADET games.

Andreas Jalsovec: The first game is entitled Just Fly, and is modeled on a PlayStation game named Just Dance, which we used and adapted for our drones. The players have to assume various poses or make gestures, and the drones dance to them. The nice thing about this is that the soundtrack is by 7bit Heroes, who provided the sound at an event in Brisbane, Australia that also featured a spaxels flight. They’re an interactive pop band that’s sort of into the same artistic groove we are, staging interactive performances.

The second game is an allusion to the virtual game Pong, which you can then play with the spaxels.

Then there’s the Smart Atoms presentation. What’s up with that?

Horst Hörtner: Smart Atoms deals with the question of where the limits of human perception are located. In concrete terms: What type of swarm behavior by these quadcopters causes spectators to perceive the swarm as a single entity, as an object. Where exactly is the perceptual dividing line between “I’m interacting with many individual objects” and “I’m interacting with an object consisting of numerous parts”? And which interaction strategies and metaphors emerge from this? 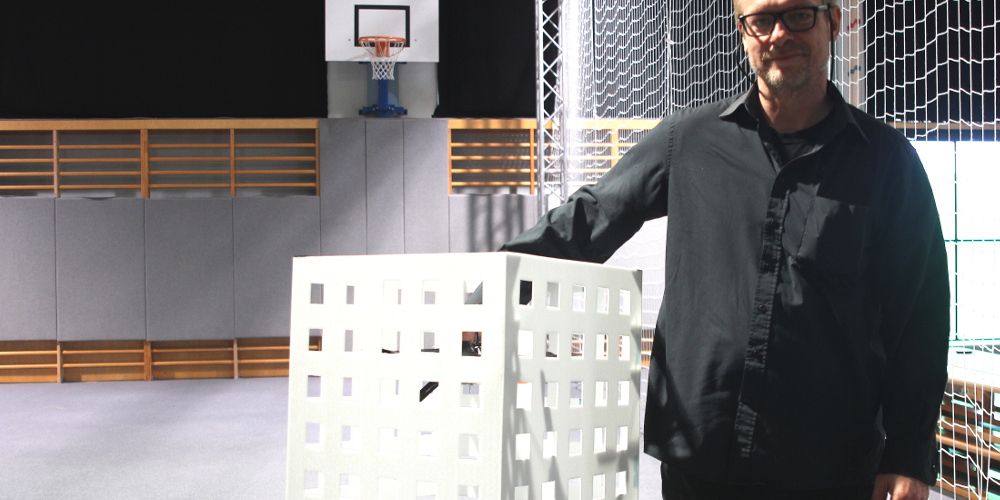 Horst Hörtner: In the case of an indoor flight—also because you’re a lot closer to the spaxels—the spaxel is no longer perceived as a point of light but rather as an object in space. That’s the thought behind it. Here, the spaxels are white flying cubes. The point is no longer the depiction of an object, but rather a physical three-dimensional simulation of an object. The fact that these simulated objects consist of several Smart Atoms—that is, flying cubes or building blocks—and are therefore variable raises a lot of questions, not only in the area of technology but also having to do with new strategies for interaction with these objects. But we want to point out that we’ve only just begun this work, and even thought the concept is still rather rudimentary we’re going to go ahead and demonstrate it publically for the first time. And we also want to mention that Smart Atoms—both the name and the idea itself—are an allusion to the Radical Atoms discussion launched by Hiroshi Ishi.