TRANSMIT³ One: art as a collective kind of laboratory 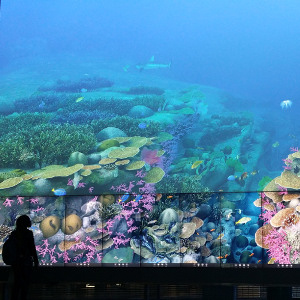 In August Zachary Lieberman visited the Queensland University of Technology for the first part of his TRANSMIT³ residency at The Cube. The project investigates scale through the visual and interactive media of The Cube. Through this research at QUT is communicated in a new way and can be explored by a wide audience.

Zachary Lieberman is an artist, researcher and hacker dedicated to exploring new modes of expression and play. He is a co-creator of openFrameworks, an open source C++ toolkit for creative coding and he teaches at Parsons School of Design, New York.

In this interview, Zachary and Lubi Thomas, Senior Curator of The Cube at the Queensland University of Technology, talk about the next steps of the project and the challenges of the visualization of scale on such a huge virtual environment. For more information about what inspired Zachery about this project, have a look at the first interview at the beginning of his residency. 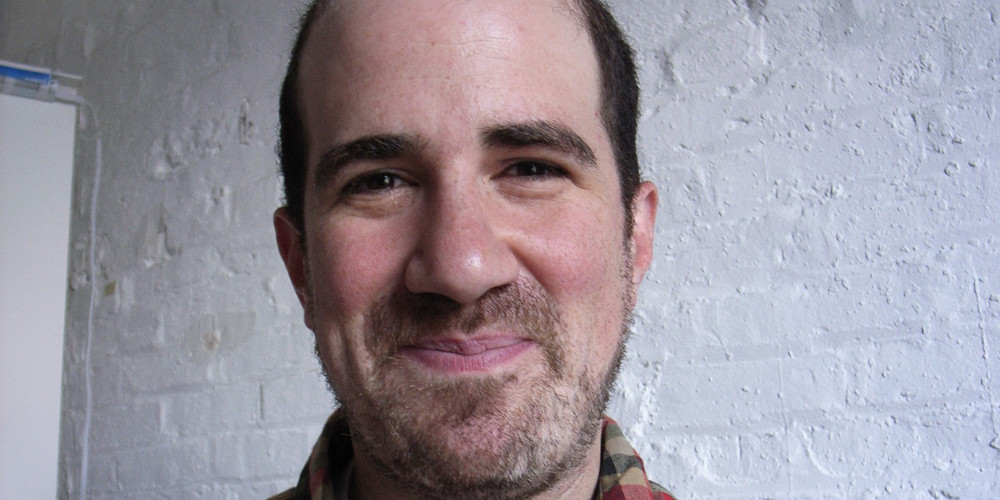 Why did you plan or why are you planning to involve other creative coders, you know the micro-commission idea?

Zachary Lieberman: For me it’s really important to suggest this idea of art as not an individual but collective doing and really like art as kind of laboratory. We have a tendency to promote individuals, and even you see this in museums like they would rather put one name up than five names.

Lubi Thomas: Well they do it with science, they have one, the hero scientist and the other 25 that made it possible get lost.

Zachary Lieberman: Yeah, exactly. There is a tendency to do that and I see projects like this as a way of engaging the community and engaging people who have something to say about one of these questions. For me that’s really interesting and I got very inspired by James George, Jonathan Minard and the folks that work on the Clouds project because they took some of the funding for that project and did these micro-commissions. I did one of the commissions with Shantell Martin and we created part of the Clouds project, there were other artists that also got a small amount of money to make a small part of a much larger kind of tapestry. I think a project like this really invites that. We can have these different scientists, these different research questions and it’s quite easy to say ok that’s something that Abby does really well or Lucas does really well let’s send them this question and see if they have a response and let’s use the budget to get into dialogue with different people from the community. For me that’s really exciting. 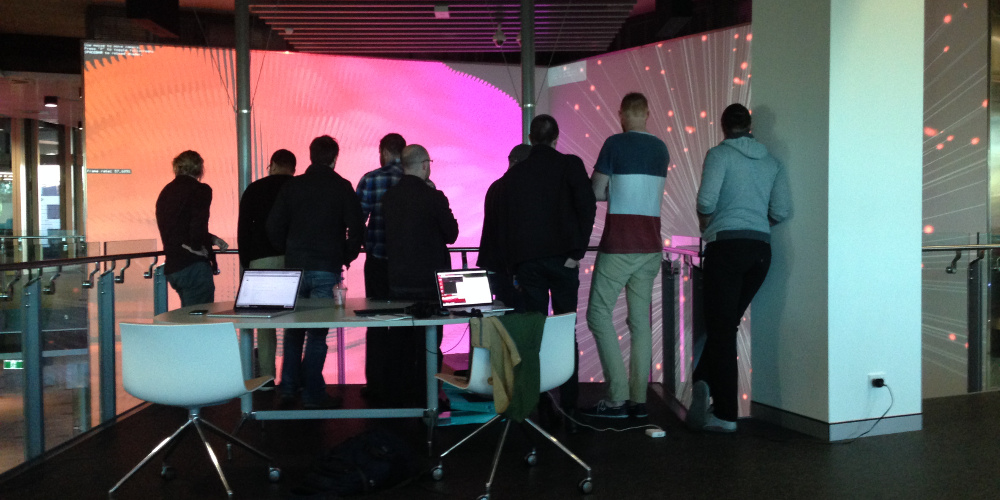 This could be an early question, but what do you think will visitors at The Cube experience? Do we have a vision of that?

Zachary Lieberman: Yeah, the way that I’m envisioning now is that there will be a kind of pedestal and on that pedestal there will be a knob and maybe a kind of small display which will be the means of interaction with the su0rface. The surface is quite large and there is a possibility of doing touchscreen interaction. I’m not very sure about that at the moment, but I’m definitely sure we need some sort of physical control, something that’s very gestural and very clear that you are interacting with the system. I’m still trying to imagine this but the idea is that I really want to take this physical gesture and show it the same way that you might change the zoom on a camera or change the setting on a telescope. I think that this physical gesture is changing your sense of scale. This physical gesture is moving you through a world and that world is comprised of different artistic responses. With this you are going to be able to zoom in or zoom out in a way that people are used to it with physical devices. I want to connect that kind of physical action to the virtual environment to create the same feeling to what people do when they are working with an optical apparatus. I imagine connecting this feeling to the visualization. Therefore, I am thinking about layers and scale to show that movement through scale. For me that’s an interesting challenge and there are a lot of open questions; interesting visual questions about layers, about depth and about showing a kind of navigation through material. I really want that to be rich.

It is about watching these artistic responses but also about the general feeling of scale like just being able to kind of zoom and navigate through. You zoom down and you are seeing, things are getting smaller and smaller and smaller, and things are getting bigger, and bigger and bigger. We have to figure out how to show this and how to make this experience interesting.

Lubi Thomas: And it’s interesting that you are trying to – and that’s part of this challenge – to embody the physical interaction into the visual experience and again is another of those layers of concept that give richness to the whole project. For this space it is a special challenge because there is no invigilator to give you instructions and the last that you want is that someone has to read what to do before they can do it. 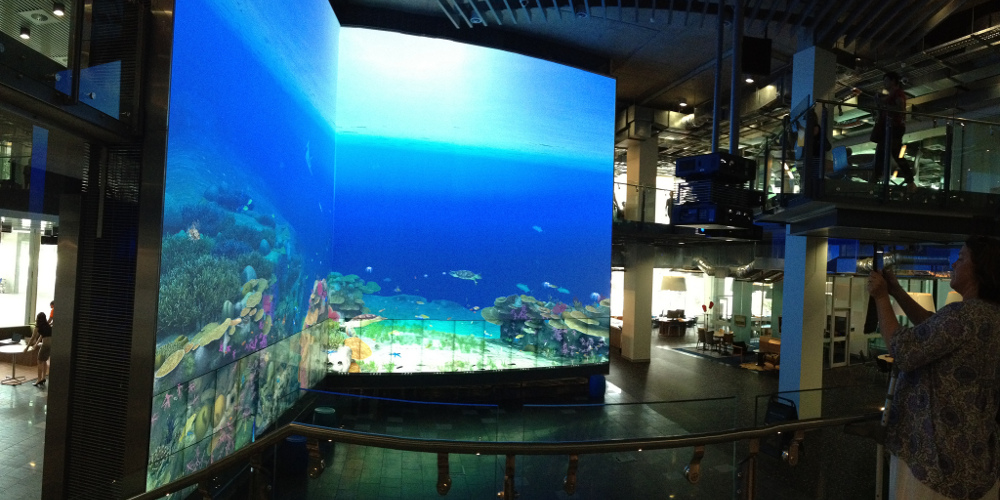 Zachary Lieberman: Another thing I’m really concerned with is that it is such a big surface sothat we have to be really careful about the speed of movements. I don’t want to create something which makes people noxious or distract them. It has to operate visually with some level of kind of concern for the environment.

Zachary Lieberman: I’m quite worried about that and I’m really sensitive. Of course I can’t really tell anything yet, my content is not up. But I want to find ways expressing scale change without dramatic zooms and shifts and where you have items moving really quickly. There is a lot of stuff you can do with focus and other more settled ways of expressing scale change. I think seeing that kind of stuff is important, too. I am worried about sort of nausea because The Cube is huge. And you are possibly going to get noxious because you are not moving but it’s going to feel like you are moving as it’s not like a small screen, but it’s something that you are inside.

Lubi Thomas: You will have total visual immersion as you won’t be able to see outside of The Cube. That definitely creates challenges.

Zachary Lieberman: The next steps on here are to organize and help coordinate the students because their semester is starting now and they have a very limited time frame. They have about ten weeks. From now I have to do a lot of work to make sure that the students are on point and getting the work done. I will have to develop a visual system next and focus on the technical work to make the visual system possible on The Cube. So helping them get that work done, beginning exploration on these visual systems and really kind of trying to imagine who from the community will be good and even ways of reaching outside of the community are major tasks I have to do now. Those commissions don’t necessarily have to be other generative artists that are working on the ground of generative graphics and information visualization, but also maybe thinking about craft and about other types of artistic responses that could fit within this computational world.

I’m going to come back in November where I have to connect again with the students and test the content. I want to come back with the project in some – it doesn’t have to be complete – rather ready state to be tested and adjusted and tweet. I don’t have a lot of time on the display when I come back, so I have to be very concrete with what I do when I come back. Even feeling comfortable with the overall visual system and having some of the sketches in I think would be really good and would also provide a kind of documentation for others who might be working on the project to get into the project and to understand it. 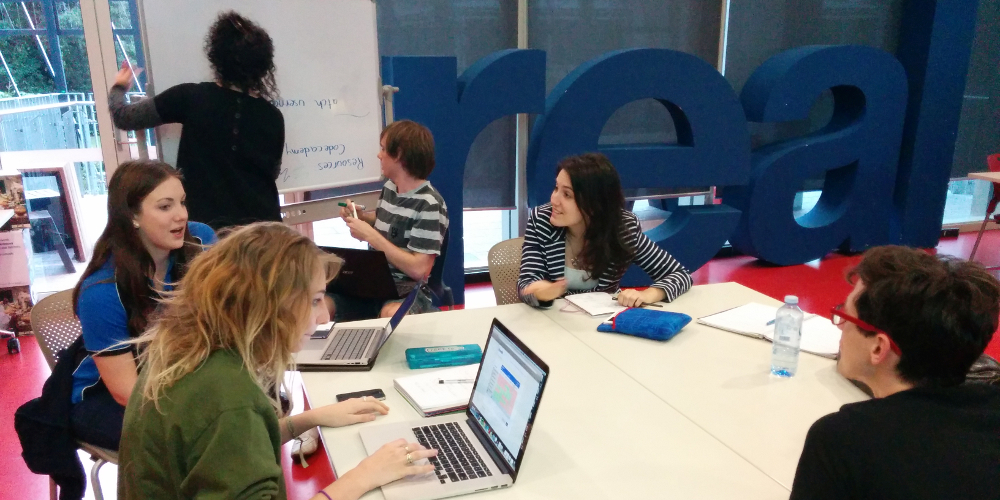 Any other last parting thoughts or comments on your whirlwind week?

Zachary Lieberman: I just feel really honored to be able to create a project that will be living in this space that will be surrounded by people. I think it’s especially something like this The Cube; you could see it being used for a lot of kind of illustrative purposes, or for in connection with things that are happening at the University but it’s really quite interesting that it’s being used for art, that it’s being invited to be used in this way and for me that suggests a lot of different potential of possibilities.