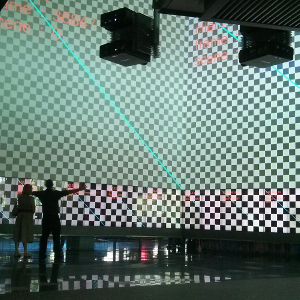 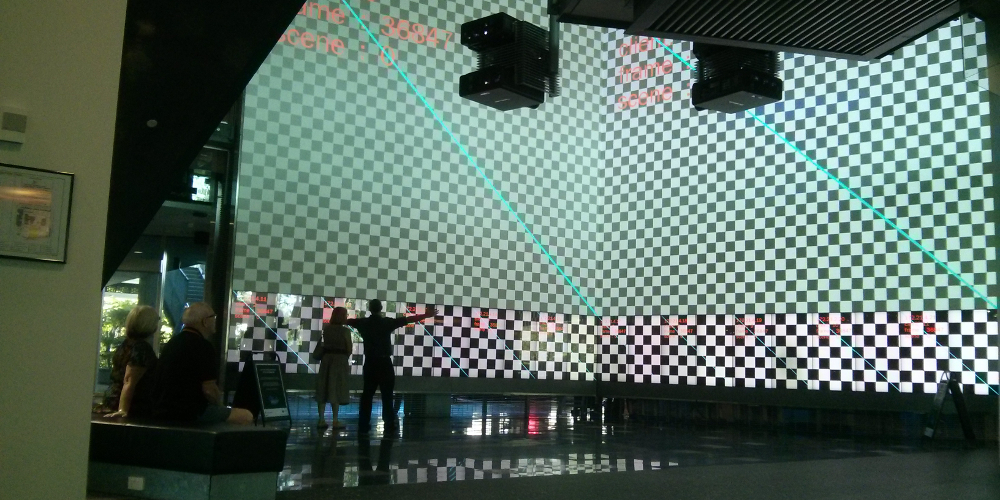 In December 2014 Zachary Lieberman came back to the Queensland University of Technology (QUT) to work on his project at the Cube within the framework of the residency program TRANSMIT³.

During his residency Zachary created a series of experiments on The Cube. In this project he aims to present scientific content on the enormous canvas of The Cube, where visitors can use a particular mechanism to zoom the image on the virtual wall in or out. On this project Zachary is also working closely together with students from the QUT, for which he is also a mentor.

In this interview Zach Lieberman and Lubi Thomas, Senior Curator at QUT, talk about the recent steps in the project.

How is it to be back?

Zachary Lieberman: It’s great to be back to eventually be jamming and testing with the wall and to get a feeling for the infrastructure. It feels also great meeting the students and researchers again and being able to really explain what this project is.

Zachary Lieberman: I have whittled it down to a hand wheel, which is basically a kind of a wheel with a crank. We’re using a sort of medium sized one. It’s a wheel that you spin and thus it has a very physical action. It’s not like a lot of things that you interact with like touchpads and smartphones, where you touch with your finger which is quite a small movement. This thing is actually a real serious movement, it’s like stirring a pot: you know, you’re doing something. I really like this tool because it’s heavy. That means there is an actual feeling like you are physically doing something. 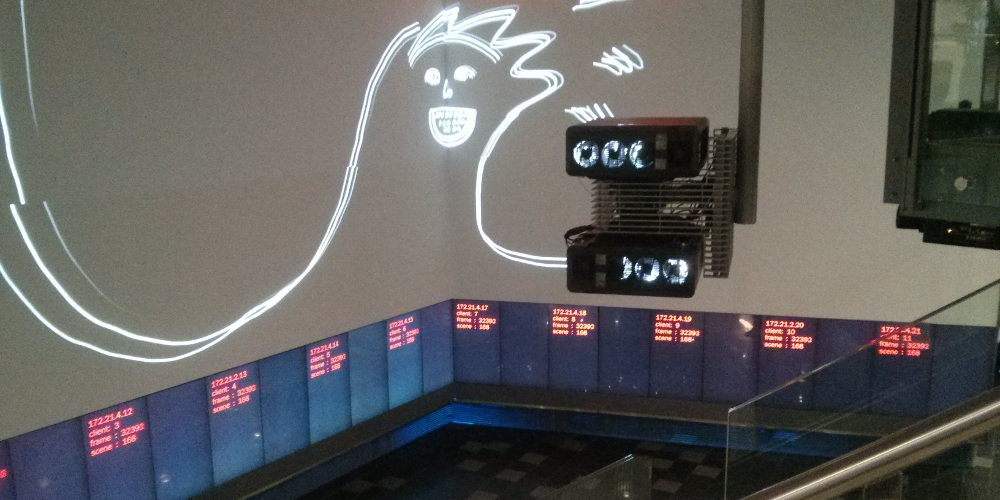 Where will this wheel be situated?

Zachary Lieberman: We are going to build a podium. The podium is going to have that hand wheel on it as well as an iPad. The iPad will display content about the researchers. As you zoom, it will kind of give you some feedback and when you get to a specific work, you kind of dig deeper and see what the researchers are about and read texts about what they are doing.

I was quite worried that it’s going to be too small because The Cube is such a big environment, but the prototype actually feels quite nice. We have been holding it while walking around and watching each other. In general we have got a good feeling that this is going to work and we can figure how to use it. The mechanical element I think is pretty much solved. There is still some work to do from a technical perspective, e.g. getting the data from the hand wheel into a computer, where we have to use some sort of sensor, like a rotary encoder magnetic sensor, some sort of positional sensor for the hand wheel.

Lubi Thomas: I really like how the crank is reminiscent on the side of some of the really big microscopic and also telescopic mechanisms have them on them. It’s literally the same object, which is kind of amazing considering how long that has been around.

Zachary Lieberman: It has a camera operated point focus. There is an aspect of something similar to pulling or rotating something that brings things in and out of focus and I think that relates to a lot of different often used practices.

I want to keep things simple.

There’s a lot of different ways you can interact with the Cube system: there is these touch screens, there is the Kinects and all of these potential ways of designing something new. But I think sometimes if you reduce the interaction point you can make it a kind of more sensitive exploration. The hand wheel is not about a complicated system that you’re figuring out and learning how to play, but actually it is super intuitive as you know how a hand crank works – I’m zooming in, I’m zooming out – you know it’s like that and this is what I like about it. We live in a world of very virtual interfaces, lots of buttons and lots of options. Though, especially now it’s quite important to actually having simple physical interactions and really highlighting that. 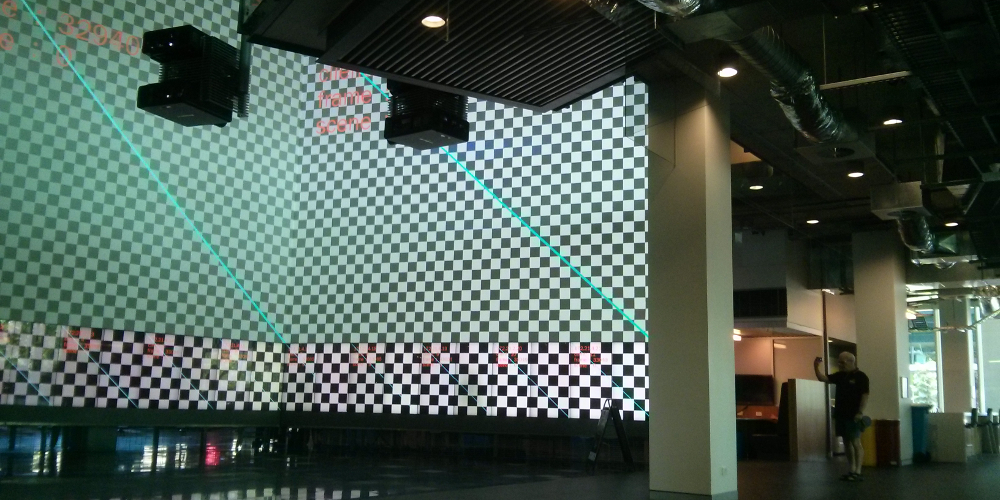 The next question concerns another challenge we tackled in our last conversation. Have you developed some ideas how you would cope with the size and the speed of the zooming?

Zachary Lieberman: I’m working on this and feel pretty confident with the interface but I’m still testing. We still have some more testing to do, but I feel we’re going to get it. And I know from previous projects on the Cube that flipping and turning fast makes people sick. I think it’s the camera movements that are problematic but things can animate quickly. But a main reason why you get sick or the reason that it affects you is that you are perceiving motion and your ears are not, because the body is not moving. So there’s going to be some limitation on kind of dramatic movement.

Let’s talk about the collaborative part of your residency now. How do you work with the students and the idea of the micro commissioning phase which is going to be happening soon?

Zachary Lieberman: The students have done an amazing job of collecting data from these researchers and specifically getting them involved in a conversation, of doing the outreach, gathering the data, collating it, and trying to figure out what scale these researchers are working at. I think for many of them it’s been great to learn about what’s happening at the university. It’s kind of a weird challenge to actually go talk to the people that they would never talk to. I’m super excited by the material that they have produced and some of them have been around this time when I’m out.

For the micro commissions it is the next step to identify artists within the community and outside of the community, which we think could be a really sympathetic fit to the research. The artists are then brought together, each with a scientist to create visualizations for The Cube together. I think that this is a kind of a matchmaking job that’s going to happen very soon. There’s a lot of kind of magic that’s going to come from that process.

Lubi Thomas: It’s really nice; some of those researchers seem very enthusiastic now since Zach’s talks. I like the fact that unsurprisingly it’s turned into a community. So you are building a community around a single project and you are also linking researchers together who haven’t met each other before.

Zachary Lieberman: I think there are art projects that are about the story the artist wants to tell, and then there are art projects that are more sort of system-driven. Here we have something that is really systems-orientated and we can create a system that involves, no it needs people to come to. This project really needs researchers, it really needs other artists. And I like that. It’s like having a party.

Last but not least we’re interested if there is already a plan which scientific and research content you want to show.

Zachary Lieberman: We definitely have a short list. We have not identified the exact ten, but there are ones for whom it’s really obvious and clear. Researchers that are looking at the structure of materials, looking at what for example graphene – these are honeycomb-shaped carbon atoms – looks like to an electron microscope and that kind of incredible visuals are what we looking for and what we can choose from. Especially this sort of looking at the edge of how we can look at materials seems to be really interesting. And there is a researcher who is focusing on printing the body. So he asks questions like, how do you print a tissue or how can you print elements of the body? And there’s an art researcher focused on restauration of natural environments and ecology. We do have a pretty good short list. It’s not one hundred percent settled, yet, as I think there are some open questions concerning scale to make sure we have enough research represented on this sort of far end of the stratum: the macrocosm versus the microcosm.

Zachary Lieberman is an artist, researcher and hacker dedicated to exploring new modes of expression and play. He is a co-creator of open Frameworks, an open source C++ toolkit for creative coding and he teaches at Parsons School of Design, New York.