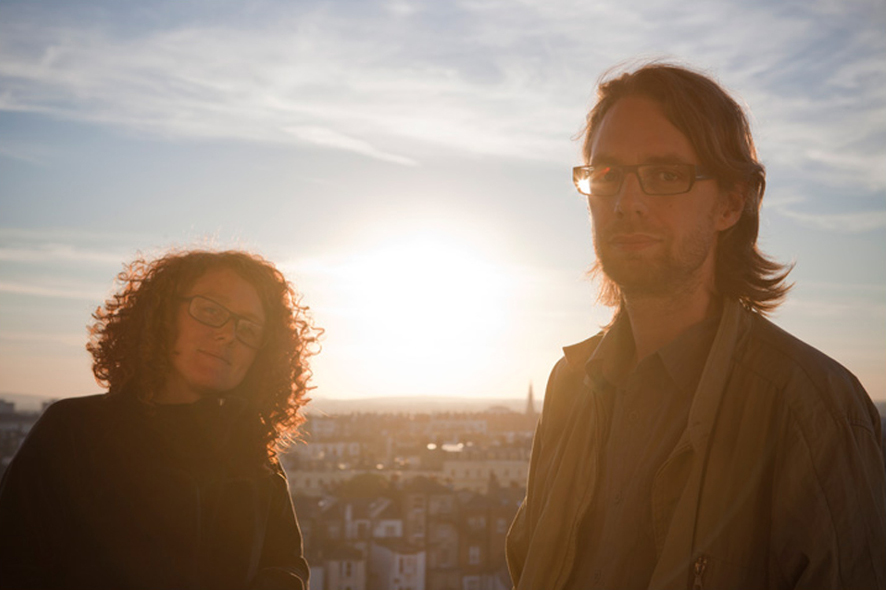 This year Semiconductor wins the Collide@CERN Ars Electronica Award, which is awarded as part of the European Digital Art and Science Network. The English artist duo consisting of Ruth Jarman and Joe Gerhardt will begin a two-month residency at CERN, the world’s largest particle physics research facility in Geneva. Then, their next stop is Linz, where they will spend a month at the Ars Electronica Futurelab. During their residency, Gerhardt and Jarman aim to create a digital artwork elaborating on the nature of the world and our perception of it, including consideration of how scientific instruments and particle physics discoveries influence our perception of nature.

In this interview Ruth Jarman and Joe Gerhardt give us an insight into their work and tell us about their anticipation for the residency at CERN and the Ars Electronica Futurelab. 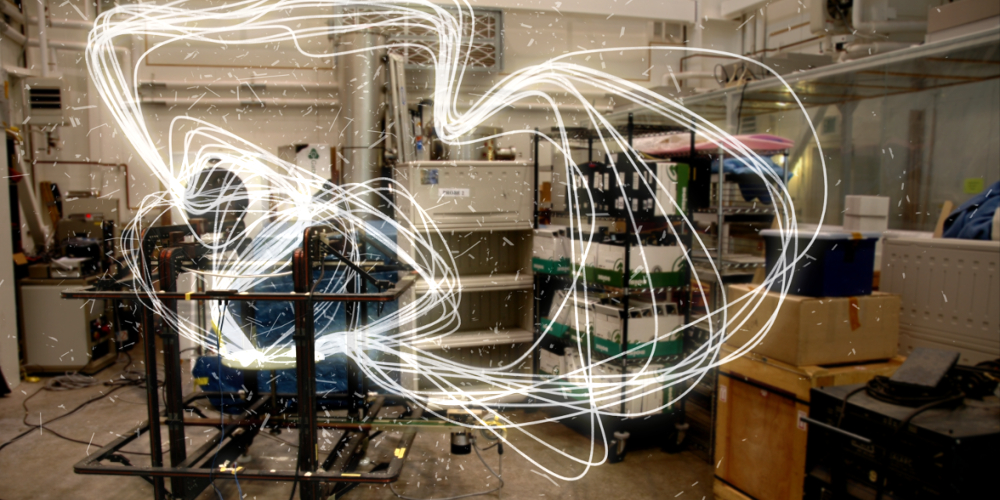 Why do you call your artists’ collective Semiconductor? That’s actually a term from physics and not from the art…

Ruth Jarman: When we first started working together, nearly twenty years ago, we were experimenting with electronic sound, releasing records and performing image and sound, so we needed a performance name. We were exploring the computer as a tool to make our art with, and figuring out how we could develop our own language with it. We realised that the computer respectively the software always had its own signature in what we were doing and chose the name Semiconductor to reflect that: each, half conducting the process. A semiconductor is the foundation of modern electronics, conducting electricity. Sometimes we would embrace the computers intervention conceptually and aesthetically, allowing it to have an input on the work, but as our work became less of an interrogation of the computer as a medium we developed our own techniques and processes which have become our signature. The name has stayed though; it’s been difficult to leave it behind.

Joe, you already were juror at the Prix Ars Electronica several times. Which side do you like better – those on the part of the jury or that of the artist who participates in a competition?

Joe Gerhardt: Being a jury member is a great way to get an overview of what’s happening in a certain field. I’m very open minded during decision making, and some of my choices I have surprised myself with. It can be quite a demanding process though, when you’re watching hundreds of films in a very short space of time and you want to remain fair to each one and give it all your focus. But quite often participating in a competition as an artist is more of a demanding process, you invest all into your work and when it isn’t recognised it can be disheartening and you have to pick yourself up and try again. That’s unless you have been selected, in which case we always remind ourselves of where we have come from to get to here and thank the people who have supported us along the way. We have submitted to Prix Ars several times, but always found we were in between categories, not quite fitting in. 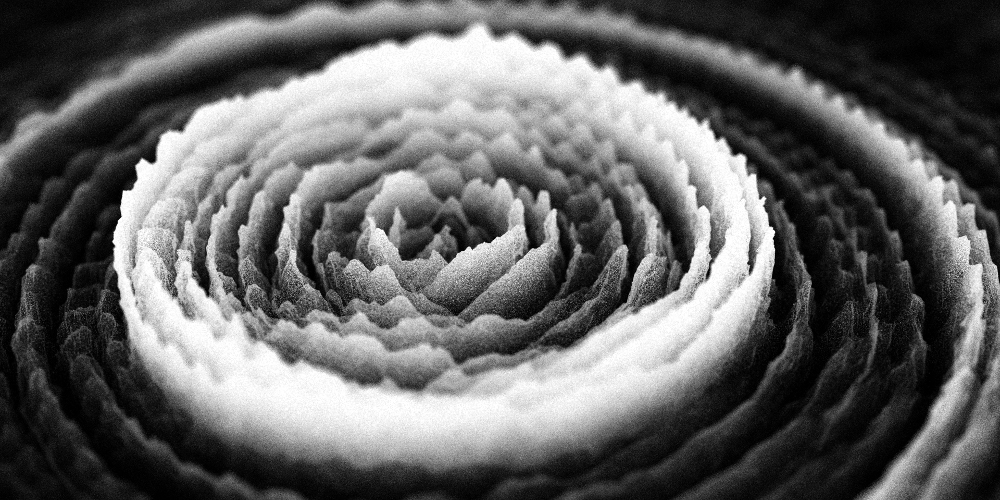 Ruth Jarman: We have been developing a specific approach to working with science and scientists our entire career. It revolves around our interest in the fundamental material nature of our world and how we experience it through the lens of science and technology. Along the way this theme has become more fine-tuned as we reflect on our previous work and learn what is at the heart of it. As the philosophical and conceptual ideas constantly evolve incredible opportunities like CERN give us a framework to explore them. The field of particle physics is the missing link in our body of work: having previously explored the make-up of matter on astronomical and geological scales we have been waiting for the right opportunity to engage with matter on a quantum scale, and the CERN residency is possibly the best place in the world we could ask to do that. With Ars Electronica Futurelab we are hoping to develop our animation techniques and get essential support managing data, to work with it as a material. 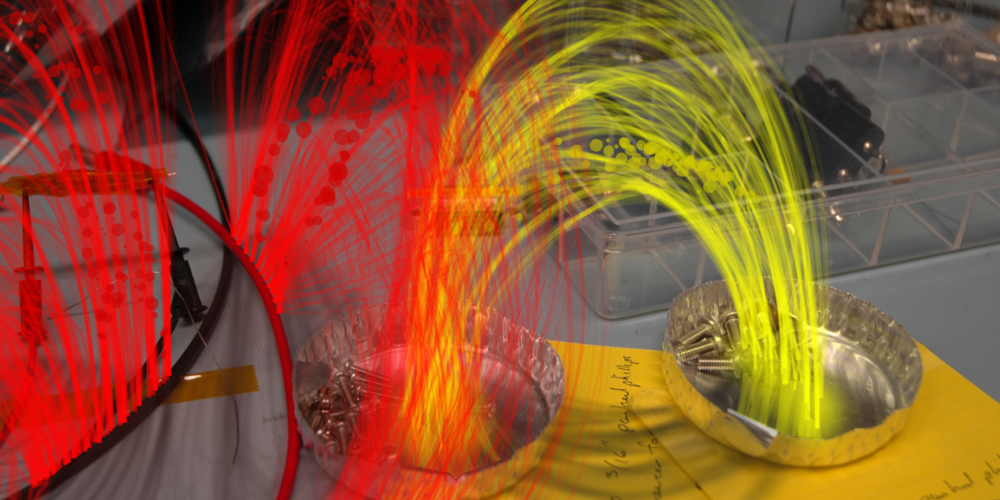 In your work you are going to explore the fundamental material nature of our world. In CERN recently a new fraction of particles called Pentaquark was discovered. Can you use this knowledge for your project?

Joe Gerhardt: It’s important for us to arrive at CERN with a very broad outlook. In the beginning we will absorb as much as we can, questioning and searching to get as big of an overview of the science at CERN as possible. It’s not necessarily about completely understanding the science for us, but more about trying to get a clear idea of the workings of particle physics, what the languages are that make it what it is, how it is all put together as a science, and being able to stand back and philosophically question this. We will then find strands of interest that pull us in and tend to follow many of these exploring them in more depth, developing ideas for ways of working with them along the way. It’s possible that Pentaquark may come into this line of enquiry; there are actually so many experiments at CERN that interest us that it’s difficult to pinpoint at this stage, the guiding lights will start off as little sparks of interest and probably be the result of a lot of serendipity. 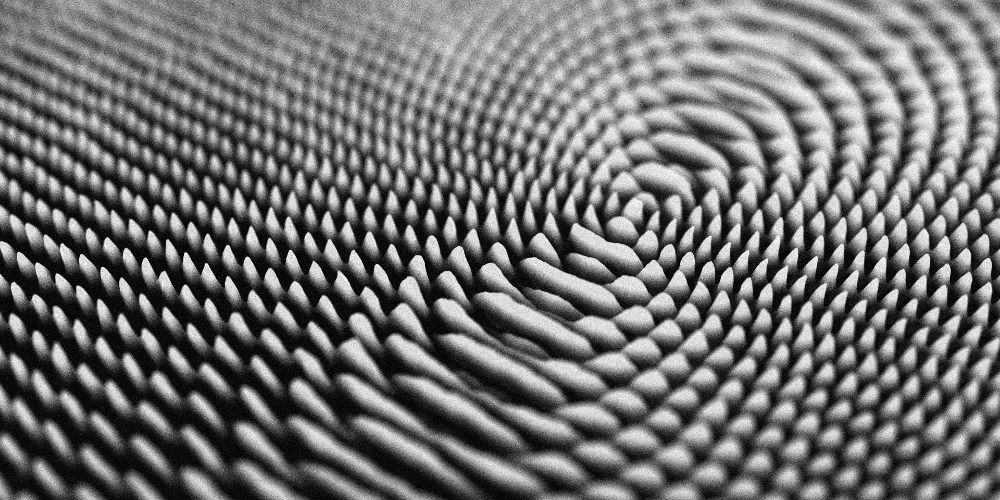 What do you like about the collaboration between art and science?

Ruth Jarman: We’ve always been interested in the material nature of the world around us and thinking about how we experience it. This has mostly been awareness that we only experience a small part of the physical world, and a lot is happening beyond the limits of our perception. Early on in our work we started looking at how the tools and processes of science can reveal these hidden materials to us, but it became apparent that they were also mediating the experience, in that there would also be some artifact or signature of the tools in the final product. This noise element really intrigued us and has led on to philosophical questions about nature, our experiences of it and science as a process. Our first collaboration with a scientist was over ten years ago now, working with his seismic data as an animation tool. We realised to really experience the workings of science we would need to embed ourselves in a science laboratory. Since then we have spent intensive time in a NASA Space Sciences laboratory, the Smithsonian Mineral Sciences Laboratory and the Galapagos Charles Darwin Research Centre. They have all been fertile grounds for interrogating science as a language and the development of knowledge. 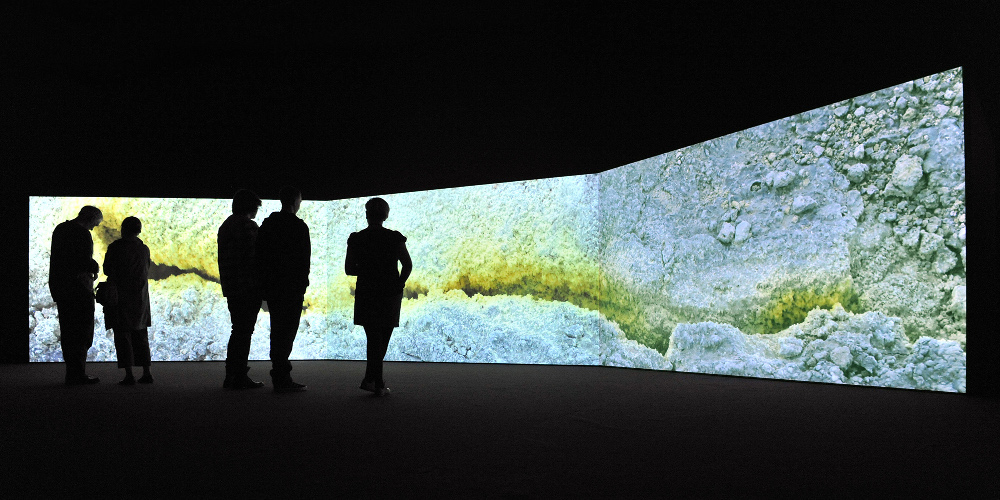 Ruth Jarman: It’s always quite daunting stepping into any environment that has a distinct language and culture that is new to you. Through our previous experiences in science labs we have learnt to embrace the challenges that this type of journey presents. As a result we have developed a confidence in our line of enquiry, and learnt how to enjoy the intensity of the experience. We will be arriving at CERN eager to immerse ourselves in what is the most important particle physics laboratory in the world, and excited in anticipation of the richness of the process and what it will bring to us. We have just completed a series of works and the residency at CERN will be the beginning of a new and stimulating chapter.

Semiconductor is UK artist duo Ruth Jarman and Joe Gerhardt. In their art works they explore the material nature of our world and how we experience it through the lens of science and technology, questioning how they mediate our experiences. Their unique approach has been singled out for recognition with numerous honours and grants including the Samsung Art + Prize for New Media, a Smithsonian Artist Research Fellowship, a NASA Space Sciences Fellowship and were recipients of a Jerwood Open Forest commission. They have exhibited and screened their works at the House of Electronic Arts in Basel, FACT in Liverpool, the ArtScience Museum in Singapore, the San Francisco Museum of Modern Art, Royal Academy of Arts in London, the Sundance Film Festival in Utah and at the International Film Festival Rotterdam. Their works “Magnetic Movie” and “Brilliant Noise” are in the permanent collection of the Hirshhorn Museum in Washington DC and the Centre Pompidou in Paris.