WE GUIDE YOU through the 2016 Ars Electronica Festival 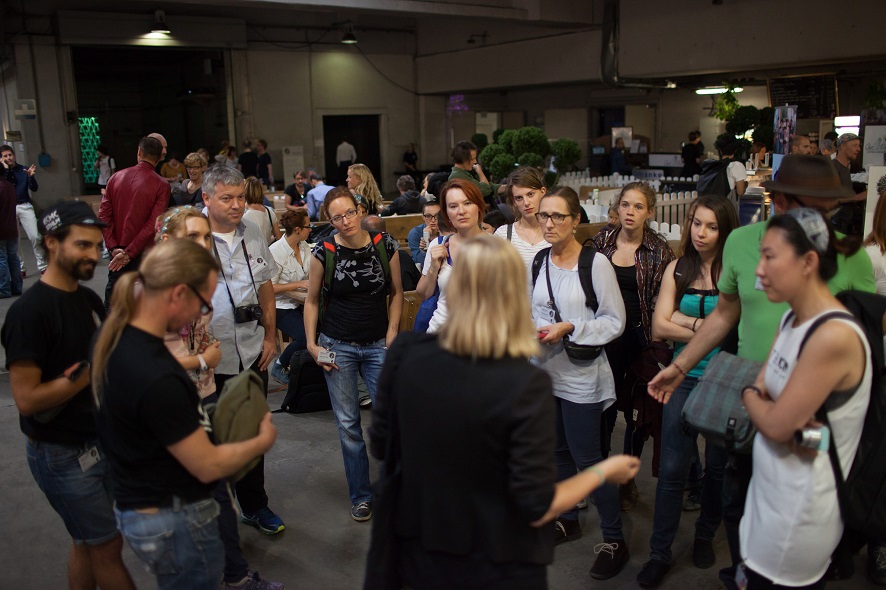 WE GUIDE YOU through the 2016 Ars Electronica Festival. What with all the interesting works of art, workshops and events, it’s tough for festivalgoers to get an overview of what’s available—especially if you don’t speak German or English. And the festival program can easily put impediments in the way of people with handicaps.

That’s why we came up with WE GUIDE YOU, a diversified array of guided tours to acquaint 2016 Ars Electronica festivalgoers with many of the exhibitions and works on display. In the Expert Tours, insightful guides point out works you’re sure to find particularly interesting. The Highlight Tours provide an introduction to the main features, and the Community Parcours enable people from other countries and cultures to get the picture in their mother tongue. In addition to POSTCITY, the former logistics facility at Linz’s main train station, there’ll also be guided tours of the Ars Electronica Center and the OK Center for Contemporary Art, site of the CyberArts exhibition.

Rosi Grillmair’s in charge of the guided tours at the Ars Electronica Festival. Here, she describes the various tours and explains why the Community Parcours are such an important part of the WE GUIDE YOU program. 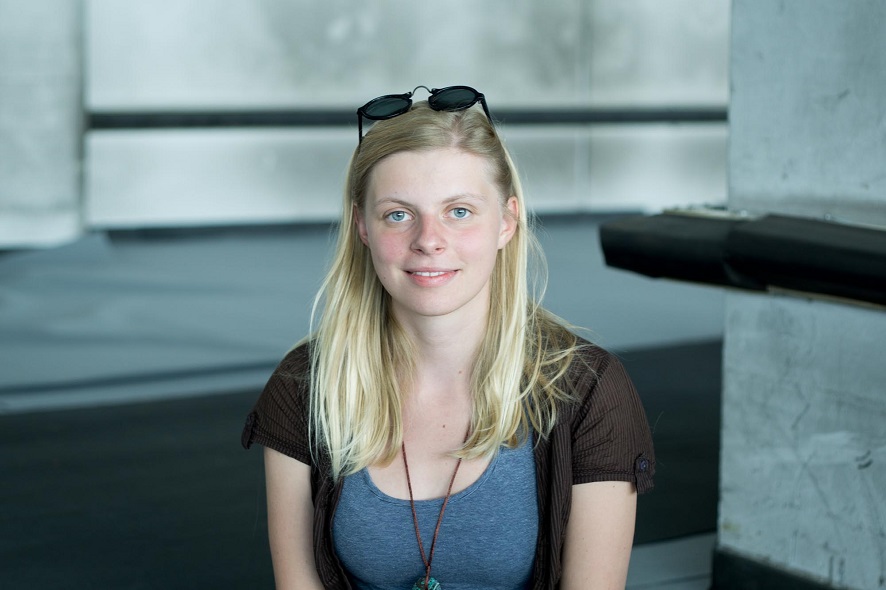 The WE GUIDE YOU lineup is so extensive! Tell about these tours.

Rosi Grillmair: The Highlight Tours form the basis of the WE GUIDE YOU program. They’re offered up to 12 times daily in German and English. We have a staff of seven guides, some of whom are veterans from last year. Before they start work, they take part in an orientation session with Gerfried Stocker, Ars Electronica’s artistic director, who goes through the festival with us and explains his highlights, so we’re able to offer valuable insights during our 1½-hour tour.

Besides the Highlight Tours, there are two other programs, the Community Parcours and the Experts Tours. 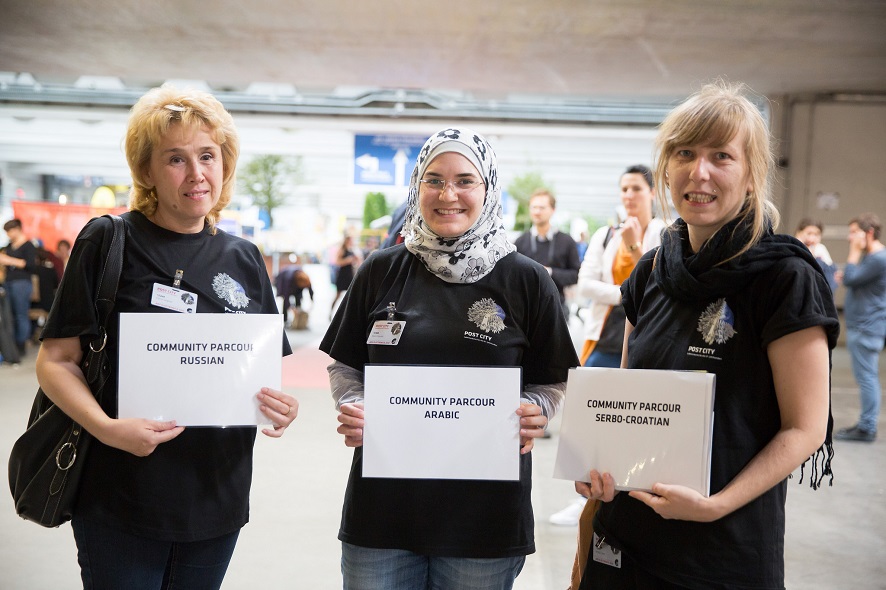 What do the Experts Tours take in?

Rosi Grillmair: Various experts offer their insights into the festival theme. Here, you can consider the interesting issues that Ars Electronica artists are raising at the moment. What’s relevant this year?

There are 10 Experts Tours and a workshop. They’re all very different—for example, there’s an “Unfamiliar Friends – Global Village” tour on the subject of fleeing that concentrates of projects by and for refugees. The Tangible Media Group at MIT Media Lab will be conducting a Radical Atoms-themed tour, but not in the Museum where the exhibition is running but here in POSTCITY, where they’ll present the artists who’re dealing with this theme in their works. Dr. Schwarz from the city’s Botanical Garden will take a group onto the roof of POSTCITY and explain the flora that’s gotten established up there, completely independently of human intervention but well-adapted to the prevailing conditions like the waste heat coming up from the building and the wind blowing through the gaps between adjacent structures.

There’s also a tour of the Postal Service’s new logistics facility in Allhaming for those who are interested. This will bring out the extraordinary features of the POSTCITY location, but also show why it’s now obsolete, and how the new facility works. 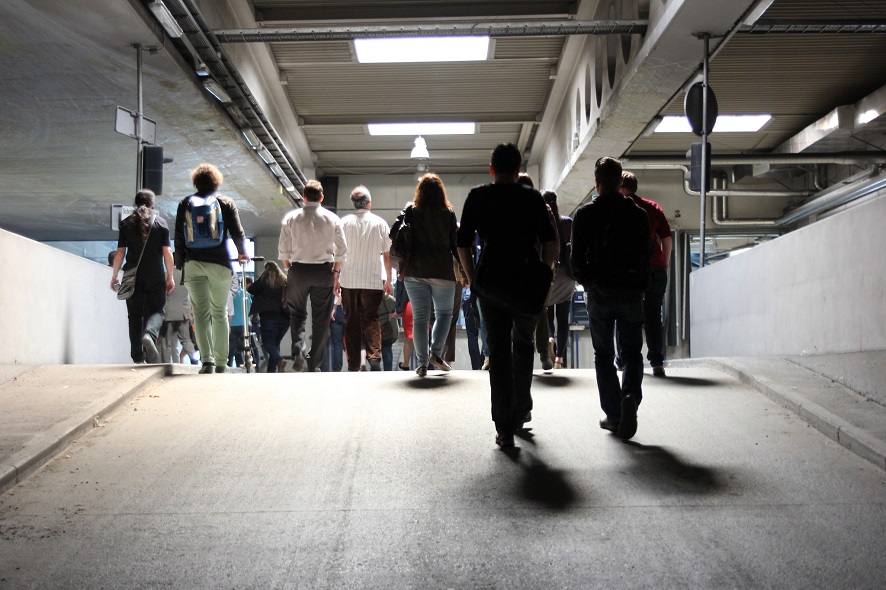 The Community Parcours make up the third tour category on the WE GUIDE YOU lineup. So, what are these, actually, and how many will there be?

Rosi Grillmair: Community Parcours are tours offered free-of-charge to minorities in Linz and Austria. Above all, they’re for people who wouldn’t otherwise attend the festival because, say, they don’t feel included or they can’t really relate to art and technology. This is the third year were offering Community Parcours. The idea was implemented by my predecessor, Susi Windischbauer. There’ll be Community tours for the blind and visually impaired, as well as in eight foreign languages including one in Austrian sign language. 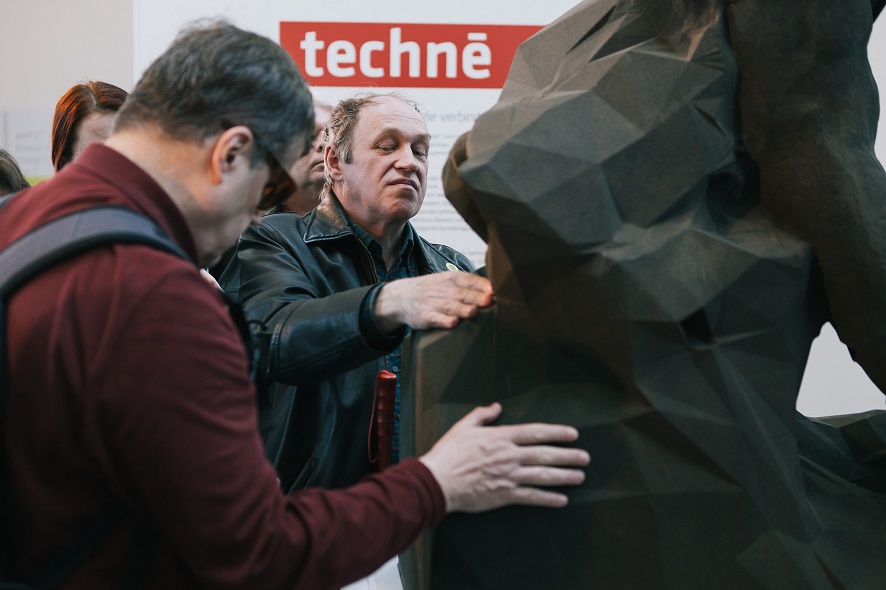 What criteria did you apply in selecting the languages?

Rosi Grillmair: We started out three years ago with 11 languages; this year, we’re down to eight. We asked the City of Linz’s Integration Bureau what were the most important languages of minorities in Austria, and from the 11 we initially offered, eight turned out to be in demand. The Integration Bureau recruits our guides, and also organizes the outings for groups who have difficulties traveling to Linz. Last year, a lot of residents of refugee facilities attended the festival. We gave refugees a guided tour of the Ars Electronica Center and then of POSTCITY, and hosted a luncheon in between. This was made possible by the generosity of private donors.

In addition to the Integration Bureau, many associations in Linz lend a hand. For instance, a group named Ibuk stages a “Culture Pilots” program in which members of minorities lead tours and describe the city from their points of view. This program was launched in 2009 and is still going strong. One Culture Pilot will be giving a tour of the festival in Russian. Other associations as well—Pangea, SOS and ULF, Upper Austria’s independent volunteer center—help us out quite a bit. SOS wants to offer a tour for unaccompanied minors. Pangea plans to stage its Language Café right on the festival grounds—that is, offer a tour in German for people who are in the process of learning the language. So, that’ll be German instruction and an intro to the festival all in one. 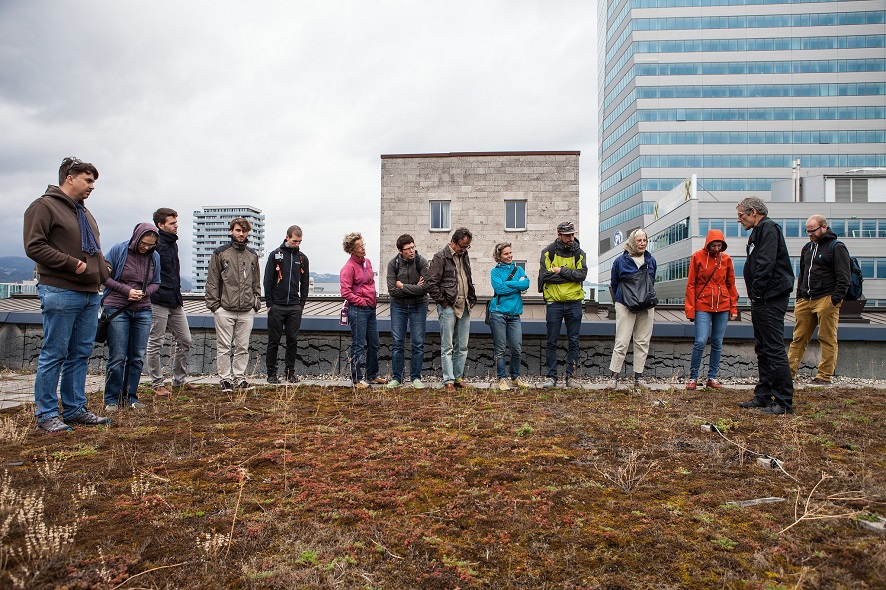 Why are these Community Parcours so important for Linz or Ars Electronica?

Rosi Grillmair: This is one of the social aspects of Ars Electronica. The point is to organize a festival that not only attracts people from all over the world but also one that’s relevant to people who live here. For example, there are a lot of projects about refugees and integration—on one hand, it’s very important to feature this here because the festival is a gathering place for innovative people who can make things happen; but, on the other hand, it’s a shame if you can’t enable the refugees themselves to attend. That’s precisely why the Community Parcours are free—to establish a sort of gateway. 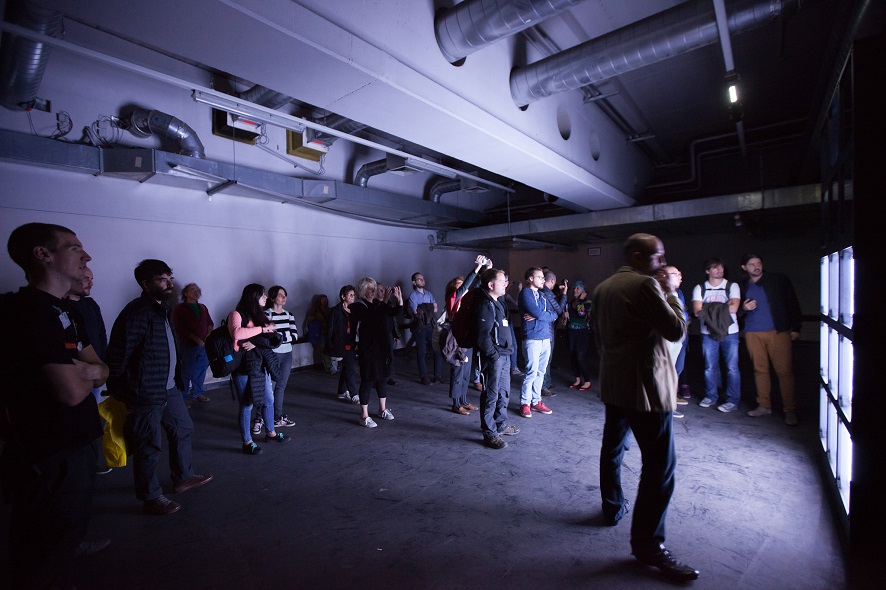 The Community Parcours tours are conducted by native speakers of eight languages. So, who are these people, actually?

Rosi Grillmair: Most of the guides have a background in art or technology. Otherwise, it’s a highly diverse group. Tina Nnwakama, who gives a tour in Igbo for the Nigerian minority, studies biochemistry at the University of Linz and is active in the Black Community association. Pooneh Yekta, who gives tours in Farsi, is in the Time-based Media program at Linz Art University. Onur Olgac, who gives Turkish tours as well as Highlight Tours in English, studies Interface Cultures. So, they’re either people who are very familiar with this field and are native speakers of a foreign language, or people who’ve been living in Linz for a long time and know their way around here. For example, Tatyana Schörghuber, who does the tours in Russian, is a Culture Pilot from Ibuk. Jerneja Zavec does the tours in Serbo-Croatian; he’s very active in Linz’s network of cultural associations. Most derive pleasure from mediating people’s encounters with art, but also from presenting their community. 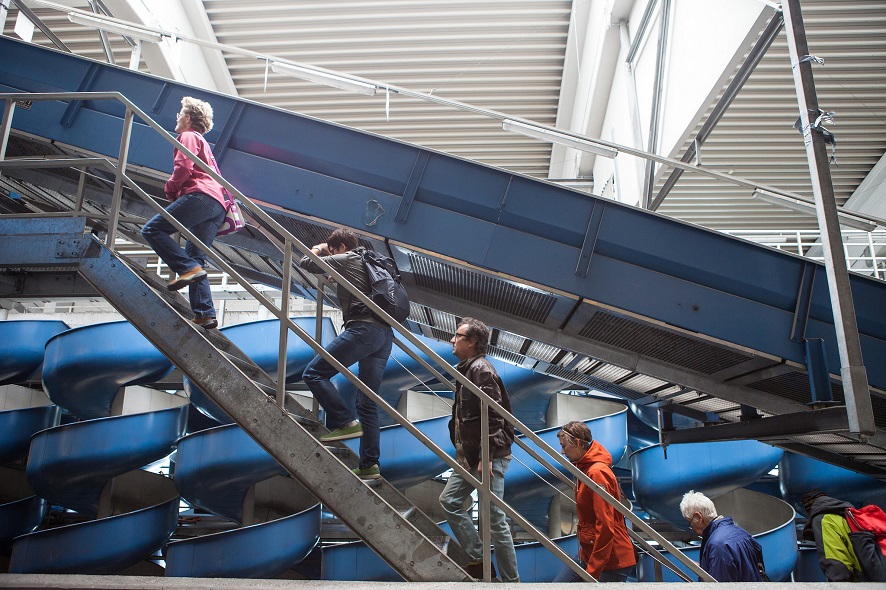 Ars Electronica has been offing tours in this form since 2014. How has this played out?

Rosi Grillmair: Every tour is totally unique, depending on the language and the ethnic group. For instance, the Igbo tour last year didn’t start at a predetermined point; it was casual, free-and-easy. In the last couple of years, the tours in Arabic and Farsi were the biggest; we had the most reservations for them. Last year, there was an exhibition about habitats, and in the midst of it was a UNHCR refugee tent, which suddenly brought in a totally different perspective from which to consider this subject. For instance, there were maps on which crisis regions were marked, and most of the people in this tour group came from precisely these regions! There was also an interactive world map to which information could be added: Where am I from? Which location should be changed? What places are associated with good or bad feelings? Many people regarded this as an opportunity to leave behind something that could possibly make an impact on the future.

This will be one of the focal-point topics this year too, since there’ll again be an Experts Tour about it. The guide is Joan Bairam, an Aleppo native who’s active in many Linz cultural initiatives. He’ll conduct a Community Parcours tour in Arabic as well as one entitled “Unfamiliar Friends – Global Village,” which is, in fact, more than just a tour. The group will gather in the EduLab to discuss fleeing, what it’s like to be a refugee, and how this is being dealt with in the context of Ars Electronica.

How can you take part in a tour like this?

Rosi Grillmair: For the Community Parcours, you’re cordially invited to preregister online. The website offers forms in each language, which means you don’t need to speak German or English to be able to take a tour. For the others, you can buy a ticket on site, or, for holders of a Day Pass or Festival Pass, your ticket is included. We hope to offer everyone a first look at the festival!

The various tours on the WE GUIDE YOU program will be conducted in POSTCITY during the Ars Electronica Festival, September 8-12, 2016. A ticket for the Highlight and Expert Tours is included with a Day or Festival Pass. Other tickets can be purchased on site. The Community Parcours are free-of-charge; the preregistration form is available on our website. For more info about the tours and to sign up for the Community Parcours, visit https://ars.electronica.art/radicalatoms/en/program/weguideyou/. 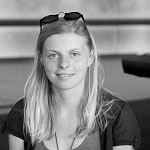 osi Grillmair is a media artist skilled at mediating spectators’ encounters with art and culture. She has gained experience organizing and programming festivals at Ars Electronica, the NODE Forum for Digital Arts, the UNPAINTED media art fair and the Tehran Annual Digital Arts Exhibition. As an artist, she creates real-time data visualizations and generative graphics; as a programmer, she works with community-based tools such as Processing and vvvv. She has exhibited her works at the Ars Electronica Festival and Center, Medialab Prado (Spain), TADAEX (Iran), amberfestival (Turkey), Medien Kultur Haus Wels and Linz Art University.