ExoMars: Are We Really the Only Ones? 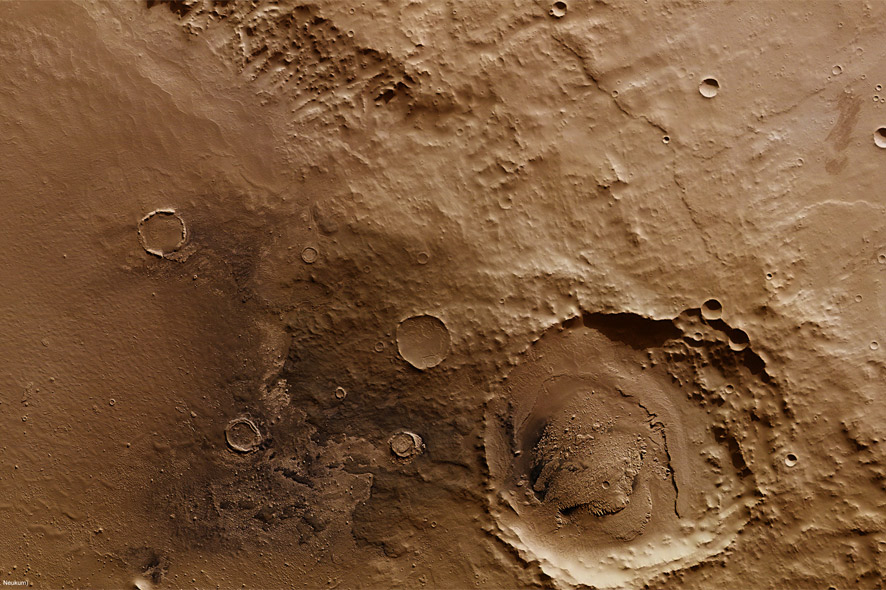 ExoMars is a joint venture of the ESA and its Russian counterpart, Roskosmos. In spring 2016, they launched two probes towards the Red Planet to seek traces of life beyond the friendly confines of Planet Earth. This first entails getting measuring instruments set up at the right locations—in the correct orbit around Mars, as well as on its surface, a landing that includes a deceleration from 21,000 km/h to 2 km/h. Thomas Walloschek is an ESA propulsion & construction engineer who was involved in the development of ExoMars 2016. A few hours before the decisive maneuver and immediately following his nightshift in the mission control center in Darmstadt, he talked to us about ExoMars. 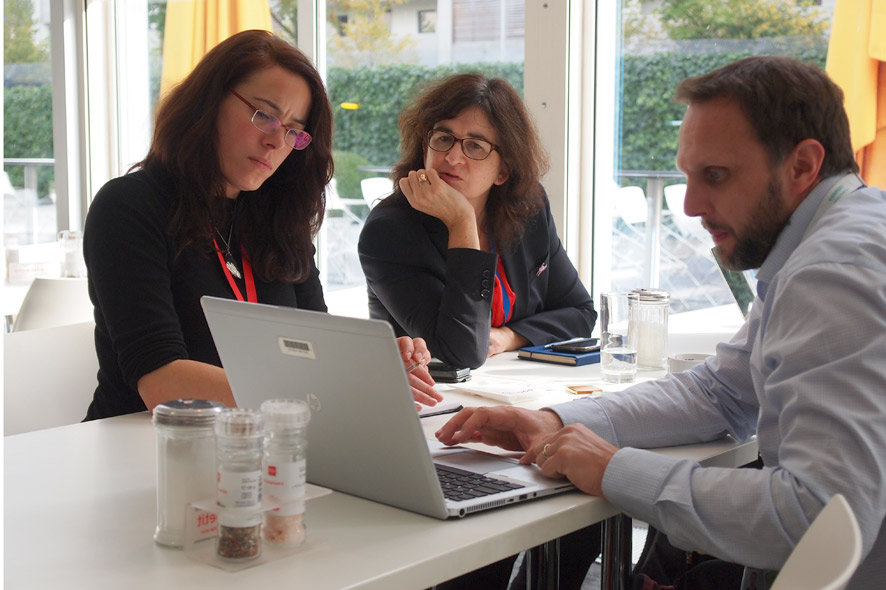 Why is Ars Electronica on site today? After an open call in summer and the decision of an international jury, ESA and the European Digital Art and Science Network offered Aoife Van Linden Tol the opportunity to spend several weeks at the ESA locations and at the Ars Electronica Futurelab as part of an artist-in-residence program. We will talk about this more in one of the upcoming interviews.

What’s the purpose of the ExoMars 2016 mission?

Thomas Walloschek: There are two different purposes for the 2016 ExoMars mission. In principle it’s really looking for evidence of life on past and present Mars. The ExoMars programme consists of two missions: the 2016 mission we are doing now, and the rover and surface platform mission which is now in development and which will bring a rover later to the surface of Mars in 2020. 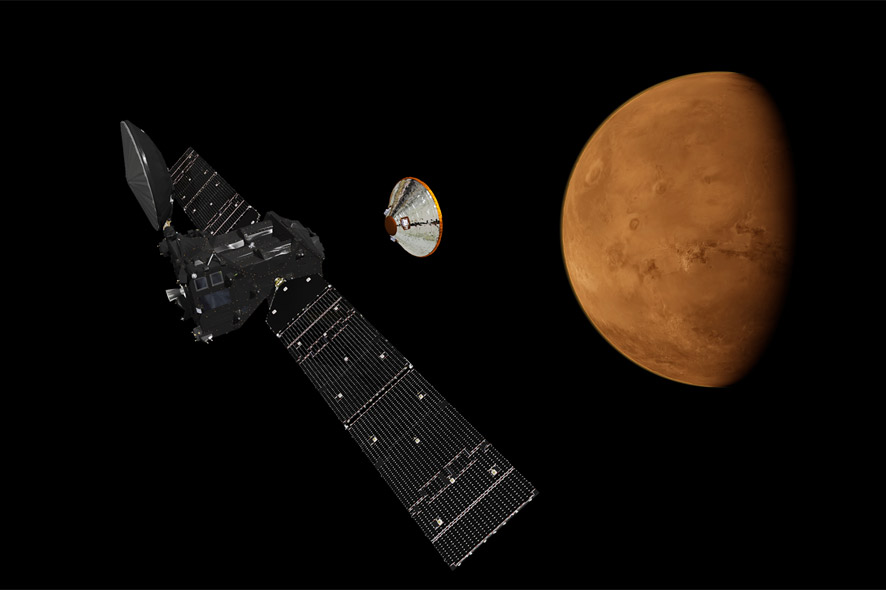 Coming to the 2016 ExoMars mission, it consists of two spacecraft: the Trace Gas Orbiter (TGO) where we have several science instruments on board and that will orbit Mars for a two-year science phase and later for a data relay phase. So, during the science mission we are looking for trace gases, in particular methane, in the atmosphere that could give us a hint of past or present life. And the second part of the mission is the Schiaparelli entry, descent and landing demonstrator module. This landing demonstrator will allow us to demonstrate newly developed technologies for the landing on Mars of other platforms, for example, the coming mission which will be a science platform including the first European rover that should then investigate further for evidence of past or present life on Mars. We need these technologies, so we can land future missions on Mars. 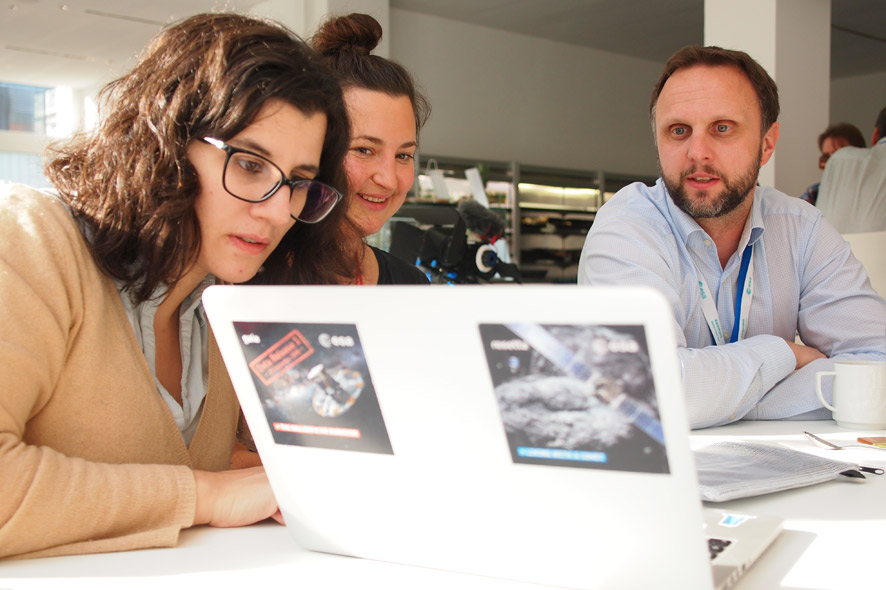 What does is it mean if the mission is successful?

Thomas Walloschek: It depends on how we define success. First of all, our first goal for success is that we will bring the orbiter safely into orbit around Mars on October 19, 2016, so that we can actually prepare to start our science mission. It takes a year before the pure science phase starts; next year will be spent mostly doing aerobraking – another test that the mission will be running – to get into the orbit they need for the science phase. And we want to land our Schiaparelli module safely on the surface of Mars to demonstrate all the technologies. The landing platform also includes scientific instruments – a package called DREAMS – where we also take measurements for a few days. So, for me, the success will be when we’ve achieved all this and we get scientific data from our instruments. Overall, we hope that we, let’s say, can bring another part of the puzzle to whether or not there was or is life on Mars.

How many people are working at your team and from how many disciplines are they coming from?

Thomas Walloschek: We can talk in terms of teams in different layers: there’s of course the European Space Agency (ESA) but ESA relies on industry and all the cooperation partners. So, in ESA itself, there is the ExoMars development team in ESTEC, which is where I belong. We are around 45 people and have disciplines in engineering like bionics engineering, radio frequency engineering, structural engineering, thermal engineering, power engineering, and so on. But also of course, there are project control staff, administrative staff, scientific staff, and management. These are the typical roles. At the moment we are here in Darmstadt at the European Space Operations Centre (ESOC) of ESA. Here we have an operations team which takes over the spacecraft after we have delivered it into orbit. Now we are working in close cooperation with them. But of course, all the technologies and everything that is built, assembled, tested and integrated is done by industry. And in industry we have hundreds of colleagues that are working on this mission.