Hercules in a Lime Kiln 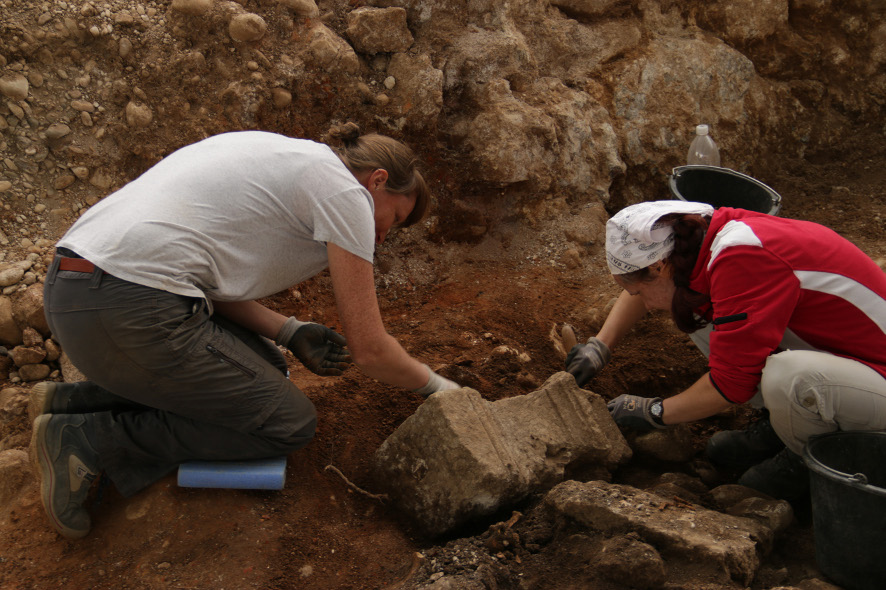 A highway construction crew working on the Enns-North Bypass in Upper Austria in 2008 discovered several Roman lime kilns from the 2nd and 3rd centuries. They unearthed two significant finds: the foot of a statue of Hercules and part of a consecration inscription. In April 2016, an exploratory dig began on another lime kiln complex, and what came to light here exceeded all expectations.

In addition to countless stones—mostly limestone—several thousand individual objects were unearthed. The largest group of finds consists of typical Roman tiles, primarily roofing tiles but also the hollow tiles used in wall heating systems. There were also many bones from animals: several cattle skulls, partial skeletons of at least two horses or mules, bones from goats and sheep, and, at the very bottom of the oven in the so-called ash channel, the skeleton of a dog. Other finds included fresco fragments, ceramic shards and several metal objects, among them 10 coins. The biggest finds were fragments of two Hercules statues and a complete dedication altar.

This coming Saturday and Sunday, November 5-6, 2016, the Ars Electronica Center is dedicating an entire weekend to archeology. Archaeologists are increasingly using laser scanning technology, as shown in the example of the Upper Austrian Provincial Museum in collaboration with EF Tech. It allows to capture historical places and buildings as three-dimensional objects and thus to preserve them for posterity. Like the grave and the spectacular finds in Enns. Among the scheduled events in Deep Space is the first public address elaborating on this series of digs and the spectacular finds unearthed thus far. In this interview, Stefan Traxler from the Museum of the Land of Upper Austria told us more about the “Hercules in the Lime Kiln.” 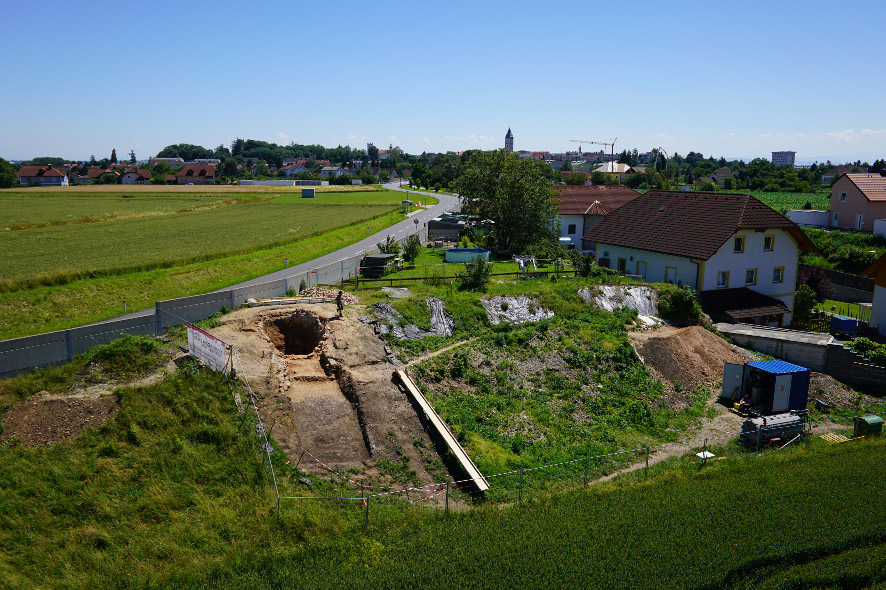 Describe to us how you felt the moment the lime kiln was opened. Did you immediately realize that this dig had come up with a sensational find?

Stefan Traxler: An archeological dig is a long-term process. In this case, the layer-by-layer excavation took over two months. At first, you go at it with a pick and shovel, and by the end you’re working with a trowel and whisk-broom. And everything is painstakingly recorded, measured and photographed. There are some days when nothing happens, and others when it’s coming left, right and center. It was a great feeling when we established that the contents of the over weren’t only rocks and tiles. The highlights were the discoveries of the lower part of another Hercules figure, a portion of an inscription containing the name of a soldier attached to the 2nd Italian Legion that was stationed in Lauriacum/Enns, and a complete altar, also dedicated to Hercules. You don’t come across something like this every day; this is a thrilling experience for an archeologist! 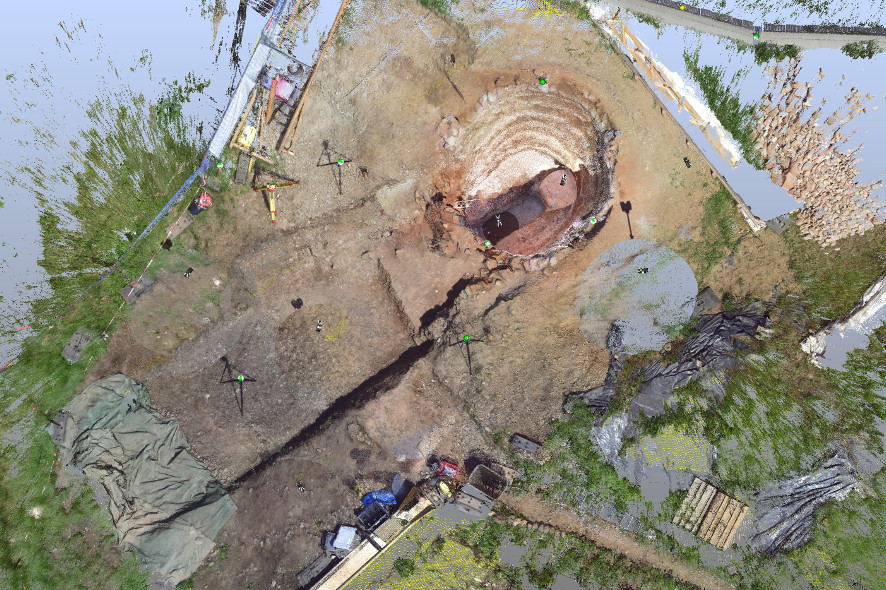 What exactly were the contents of the lime kiln?

Stefan Traxler: In addition to countless stones—mostly limestone—we were able to unearth several thousand individual objects. The largest group of finds consisted of typical Roman tiles, primarily roofing tiles but also the hollow tiles used in wall heating systems. The second major group consisted of animal bones. In addition to various individual bones, we found several cattle skulls and partial skeletons of at least two horses or mules. There were also bones from goats and sheep, and, at the very bottom of the oven in the so-called ash channel, the skeleton of a dog. Plus, we found fresco fragments, ceramic shards and several metal objects, among them 10 coins. 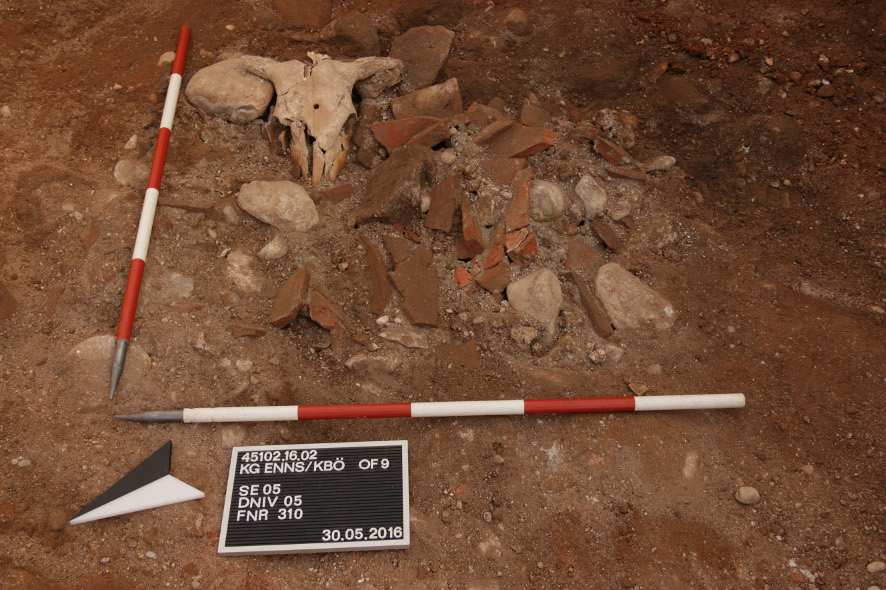 Credit: Museum of the Land of Upper Austria

Why were there so many finds in this oven, and what does this mean from a scientific standpoint?

Stefan Traxler: The final use to which this lime kiln was put was as a garbage pit. A hole in the ground with a volume of 20+ cubic meters makes a great oversized trashcan! In addition to the sheer volume, what’s particularly interesting to us is the composition of the contents. Some of the tiles are apparently from a roofing job, but there’s also a lot of construction site rubble as is obvious from the hollow tiles and the fresco fragments. Most of the bones could have been what was left over from slaughtering an animal, but archaeozoological tests will have to be performed to determine this with certainty. Otherwise, there are mostly typical waste products and things that were inadvertently thrown out. Of particular interest are the numerous pieces of limestone and, of course, the Roman stone artifacts. This is obviously material meant to be used to produce lime. Evidently, in Late Antiquity, even the contents of a shrine to Hercules were used for this purpose. Fortunately for science, these pieces were never burned. 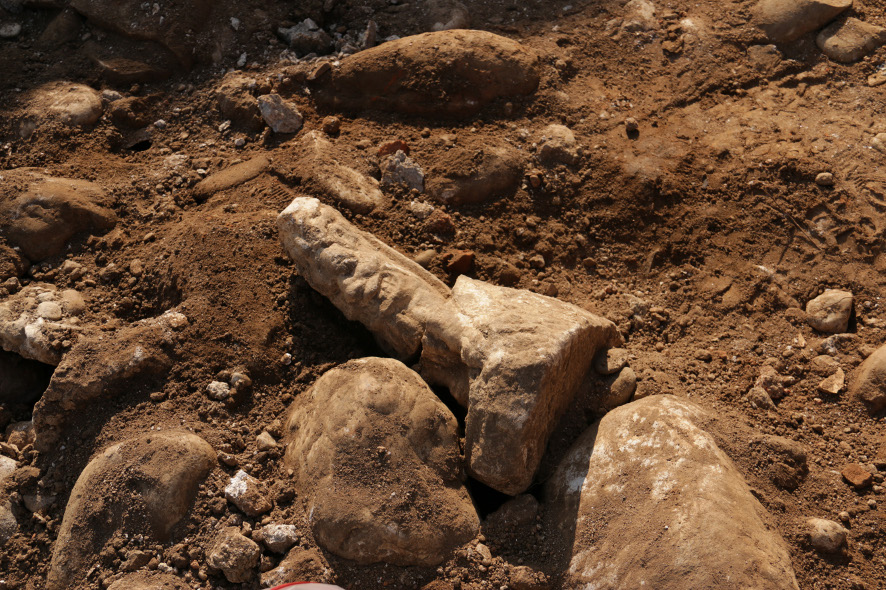 Credit: Museum of the Land of Upper Austria

What happens now with the finds?

Stefan Traxler: The objects are now being cleaned, restored and subjected to scientific study, which means that several specialists will be scrutinizing them over the coming months—an archaeozoologist will examine the animal bones, a numismatist will appraise the coins, geologists will assess the stones, and a team of archeologists from the University of Salzburg and the Museum of the State of Upper Austria will be responsible for the remaining objects and the overall evaluation.

The most significant object is the kiln itself. With a depth of over 4 meters and a diameter of 3.8 meters at the top, it is undoubtedly one of the best-preserved Roman lime kilns that have ever been excavated. Even the fire pit is still intact. We’re now planning to build a protective structure for the long-term preservation and presentation of this oven and the others adjacent to it. This structure will be opened in conjunction with the 2018 Upper Austria State Fair and the neighboring oven will be excavated live during the fair.

Whoever’s interested in going more deeply into this topic should by all means attend the Deep Space Archeology Weekend on Saturday, November 5, 2016, when Dr. Felix Lang of the University of Salzburg and I will present the results of all the digs and the spectacular finds.

Stefan Traxler was born in 1975 in Linz; studied classical archeology and ancient history at the University of Salzburg, earning his masters’ degree in 2001 and his Ph.D. in 2008; 1995-2003, curator/educator at various institutions including the Museum of the State of Upper Austria; 2002-04 and 2006, research assistant at the University of Salzburg; 2004-13, director of the Austrian Museum Association; 2006-13, co-founder and first chairman of the Society for Archeology in Upper Austria, sonius.at; since 2013, director of the archeological collections from the Roman period, the Middle Ages and the Modern Era at the Museum of the State of Upper Austria; author of two monographs and numerous articles on subjects having to do with archeology and the museum, as well as texts in exhibition catalogs; co-publisher of several anthologies; research specialties: archeology of the Roman period in Noricum, the Danube Limes and hinterland, stone monuments, history of scholarly research.