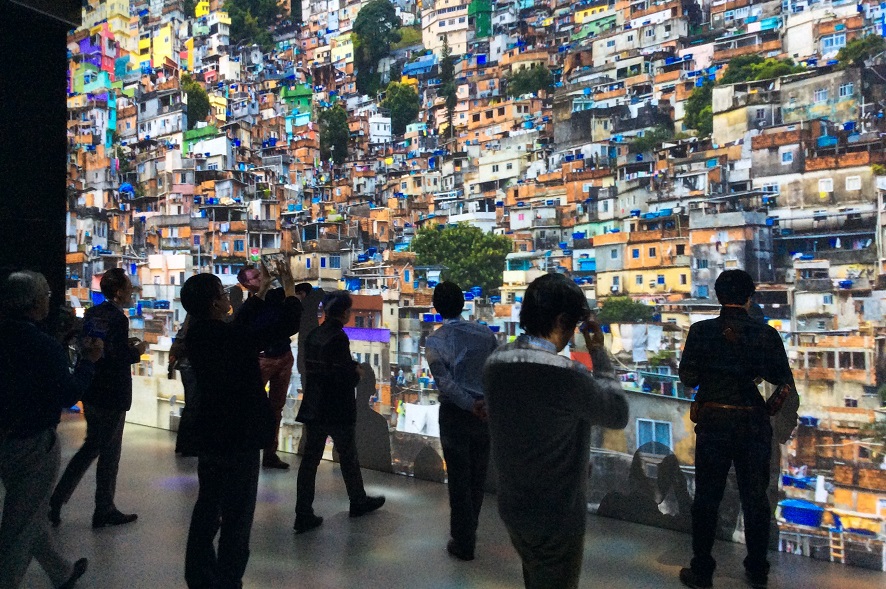 Japan's top-manager use the Deep Space in the course of the Fuji Xerox Executive Seminar Program.

People might wonder where big companies get their inspiration for new, groundbreaking inventions from. Especially for those which are assertive on an international market that is highly competitive and the more so, as the globalization opens up for small start-ups to compete. The great advantage of the multi-national corporations is their ability to invest into research and the networks, which are spun all over the globe. But it is not all about current data and figures, but also about unusual approaches to tackle the needs of future generations. 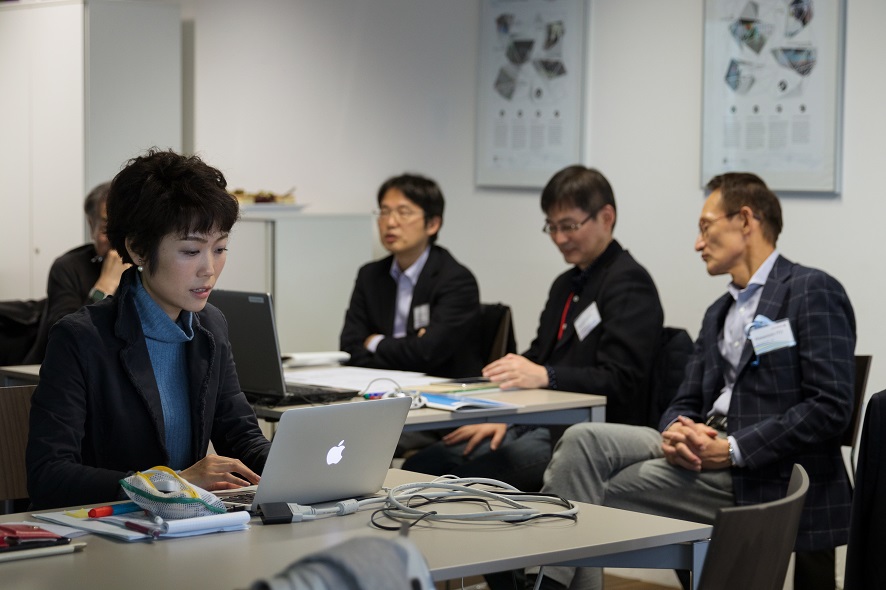 One of those networks which leads to inventions of tomorrow is the one between Hakuhodo, Japan’s renowned advertising agencies and the country’s global players, such as Fuji Xerox – the latter hosting an annual ‘Xerox Executive Forum,’ which is supposed to provide their client companies an opportunity to consider leadership which supports innovation. Since Hakuhodo and Ars Electronica Futurelab is having the “Future Catalyst” as a collaborative base to raise questions on humanity’s future needs, the point of having a part of the program taking place in Linz was only logical. Thus, just recently a Japanese delegation of 10 representatives of high prominence and six specialists from Fuji Xerox arrived at Ars Electronica to attend a workshop, hosted by Ars Electronica Futurelab’s researcher Shoko Takahashi, who developed its make-up. The companies involved were from diverse fields, such as telecommunication, logistics service, food and healthcare, automotive, real estate, electrics (consumer / industrial), insurance and chemical.

How she used the Ars Electronica Center as the workshop’s core for inspiration, Shoko Takahashi explained in an interview. 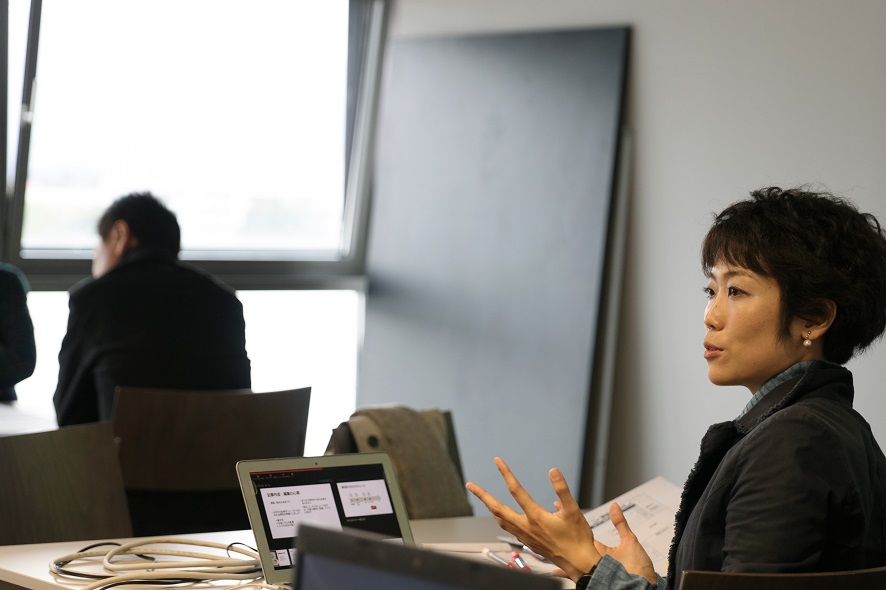 In only a limited amount of time, Shoko Takahashi explained the tasks for the participants  during the guided AEC tour. Credit: Michael Mayr

To give the readers an idea about the background, can you sum up in a few words what the motivation was and how you led the participants through this highly prolific day?

Shoko Takahashi: Fuji Xerox offers this program annually, each year with a different theme.  This year, the theme was “Revitalization of Cities through Innovation”, and as one of the experts in the world, they chose us to visit. The whole program takes about 3-4 months with a coach, and composed of several study meetings in Japan, and an overseas visiting tour. Ars Electronica was on the 6th day of the tour, right after a visit in Berlin and Walldorf, Germany. Based on their request, we provided a quick introduction of Ars Electronica, which was given by Christopher Lindinger, Ars Electronica Futurelab’s director of Research and Innovation, about our collaborations with various industries, followed by a guided Center-tour and the so-called ‘inspirational workshop’. 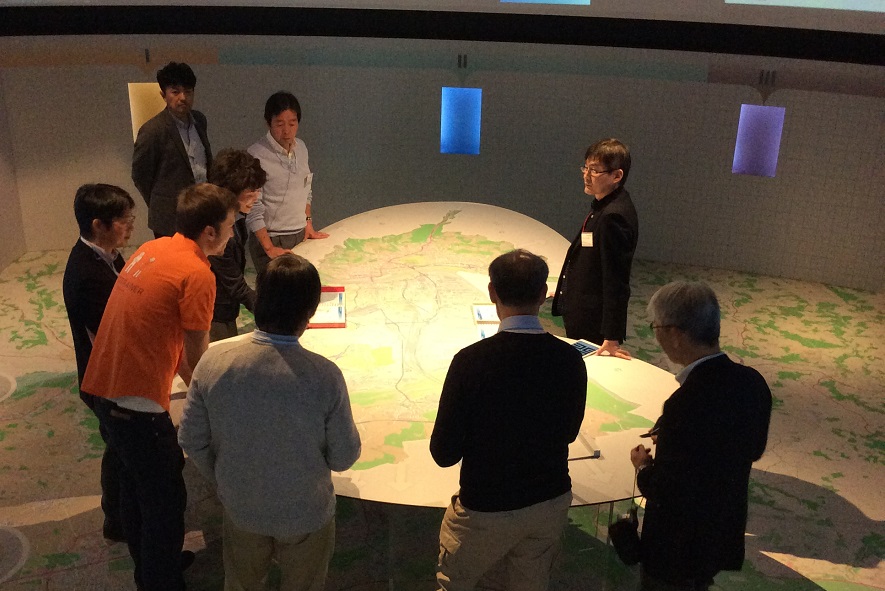 At the basement of the Ars Electronica Center, the workshop-participants summoned around the “Geo city”-table. Credit: Shoko Takahashi

How did you connect “The City” to the tasks which should bring about revitalization?

Shoko Takahashi: Well, the timespan for the workshop was a very limited one, so I had to come up with a fairly simple idea which everyone could quickly relate to. The destination of group works was supposed to generate a future newspaper, involving headlines and short articles – if not introductory lines – which would be published in the year 2040, the times when future innovations are thought to be full in effect. To spark the ideas for the news, the team members set on an AEC tour, collecting bits and pieces drawn from the exhibition in order to generate a speculative brainstorming among the participants.

The AEC tour, which resembled a scavenger hunt, involved the collection of bits and pieces which led up to a whole, in that case the front of a newspaper. As the exhibition space is vast and the topics in the AEC are various, how did you limit the fractions?

Shoko Takahashi: In order to obtain different solutions to the same task, it was necessary to construct clues for open answers. But at the same time, I didn’t want to generate a bias to the participants.  So I just gave them some keywords as a hint, for example “human dignity” “nature of earth” implicitly in the instruction, just to present them some ideas for angles from which you can look into the future. Consequently they should find works from the exhibition that fit to the given notions, and take photos of them. Last but not least, they should gather and discuss the photos and exchange opinions, why they work for an answer to the initial keywords.  In the aforementioned second step, the speculative future brainstorming, they should gather photos that inspire, excite, frighten or disgust them – the more emotional the reactions would be, the better. 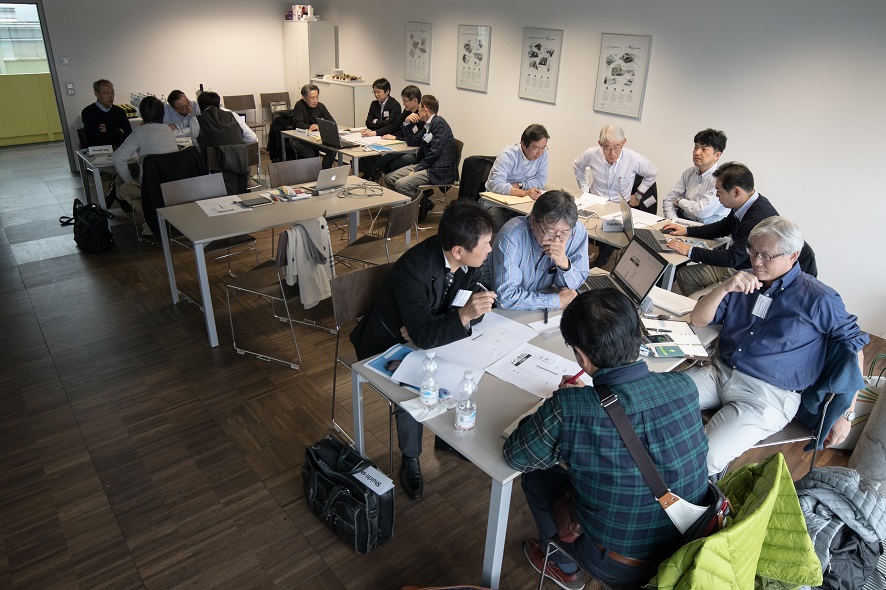 After all, managers turned into editors to create articles for their future tabloid . Credit: Michael Mayr

Where is the connection to the needs of society if you address those questions? And how can you draw your inspirations to generate solutions from the tasks involved?

Shoko Takahashi: In the exercise, the participants were asked to reason the perspective of each article, whether they described the news as criminal, problematic, positive, entertaining, etc. In that way, every member of a group had to discuss whether he or she likes/dislikes the fact and why. They were also asked to prioritize the importance of each news, which would reflect their own value to society. If you follow this chain of thoughts, you get to understand how you see the world and how you perceive society and technology.

As editors in this hemisphere tend to draw a picture on accentuating the negative sides of events, for people get on a heated debate about contradictory things, how did the Japanese executives respond to that?

Shoko Takahashi: This is typical western, yes. I see it is a recent problem in Japan that people who are used to enjoy affluence tends to shut themselves out of the bigger problems which have to be solved.  Assisted by consensus-oriented culture, people rather stay neutral or positive to the status quo than being critical even on media coverage. One needs to see the world critically in order to come up with breakthrough ideas and innovations. 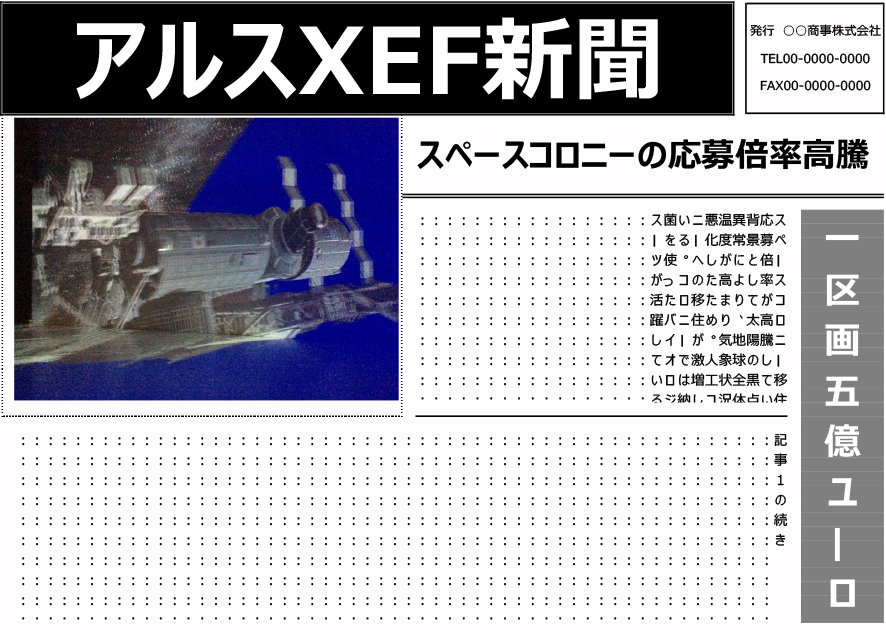 One of the results shows the draft for an article on “Humanity is finally emigrating to Mars”. Credit: Shoko Takahashi.

Would you give an example of the visions or the articles, what were the participants concerned with?

Shoko Takahashi: In the discussion round, they presented their newspapers and there was some overlapping in the topics they picked. For example one of the teams wrote an article on the topic “self-surgery”, which they thought to be popular in 2040. So they made up news about the government making allowance for that. Another team chose to write on “Mars Migration”, but what is interesting here is, that those stories intertwine to become a full picture of future society. Due to the technological advancement – like self-surgery – people live longer. That gradually leads to overpopulation which again leads to the migration to Mars. Throughout the presentation sessions they saw a much wider perspective than the insulated view. As the imagination was fostered by putting up the newspaper next to each other, it makes it easier for the participants to see the whole world as one society.

So having this vision about the future, what could those corporate executives develop to succeed?

Shoko Takahashi: There was a discussion with one of the representatives how to develop the Mars, but it was not my goal to make them come up with specific ideas on future products. More to think about how to develop a creative approach for ideas. When you are inspired by something, then it is much easier to come up with a story based on an experience. When they have learned to change perspectives by this workshop and also are going to see the timeline of what will change from here to the 2040s, then, they might be stimulated of how to tackle their respective challenges. You don’t even need the Ars Electronica Center especially to work it out. If you have the sensory to feel and think things more critically and in a longer term, then you succeed better in coming up with new ideas.