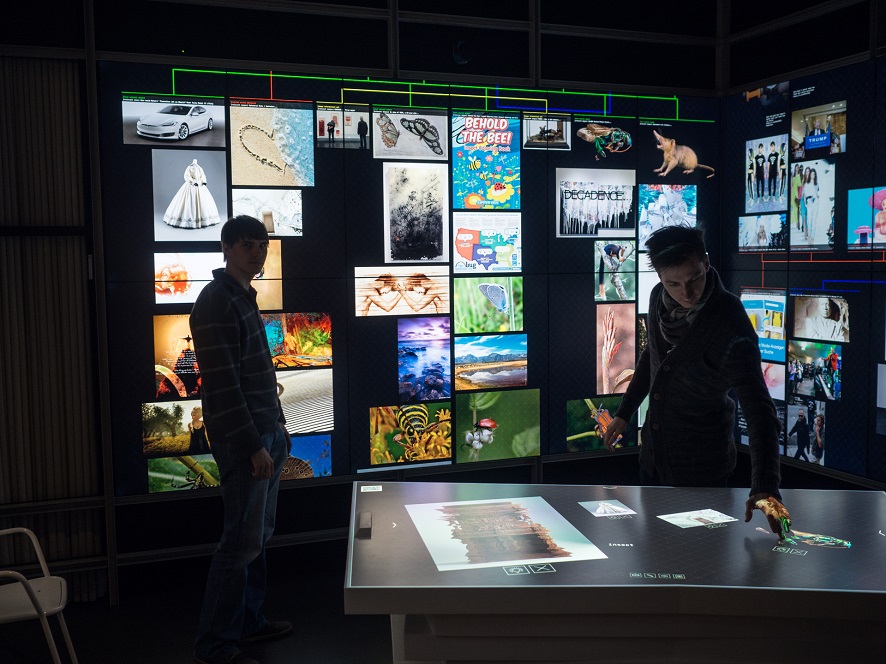 Berlin and London top the list of favorite cities among young entrepreneurs and tech start-ups. Along the U8, one of the main north-south axes of the German capital’s public transit system, the scene is most densely concentrated between Mitte and Kreuzberg, where small office spaces and courtyard workshops have proliferated dynamically in recent years. From the Rosenthaler Platz subway station, it’s just a short walk to the Hackesche Höfe, a hotbed of food & beverage establishments as well as firms across the creative economy spectrum. 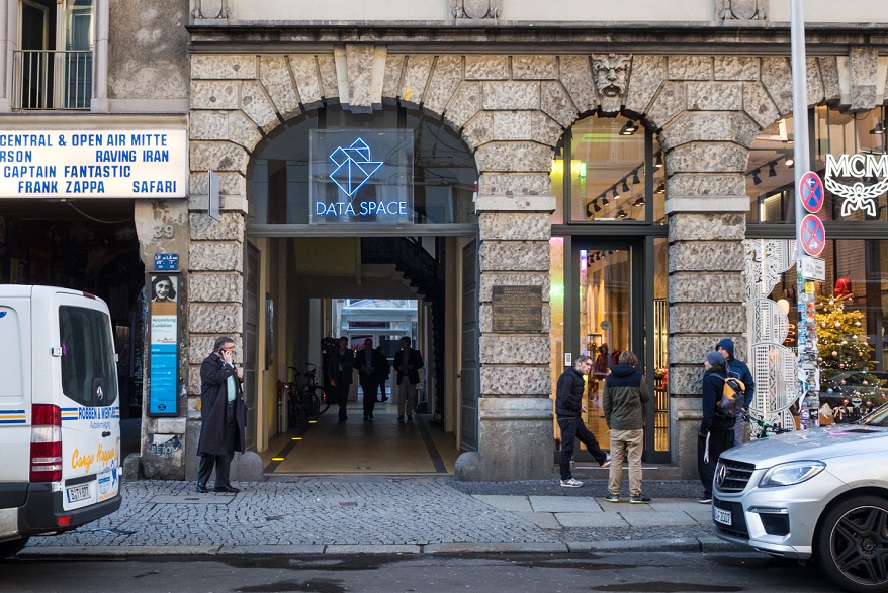 In the immediate vicinity of this networking hub, software giant SAP has opened a café that brings together digitally accessed gastronomy and the tech-oriented start-up scene under one roof. And the Ars Electronica Futurelab, an SAP partner of long standing when it comes to the artistic implementation of prestigious projects (Source.Code, Vedaport/Monolith, Buliding Bridges), had a big hand in the design of this café called Data Space. Project director Stefan Mittlboeck-Jungwirth-Fohringer, artist/developer Peter Holzkorn and developer Clemens Francis Scharfen spent several weeks installing two innovative features, which they elaborate on in the following interview. Part 1 delves into brainstorming and the so-called Data Room. 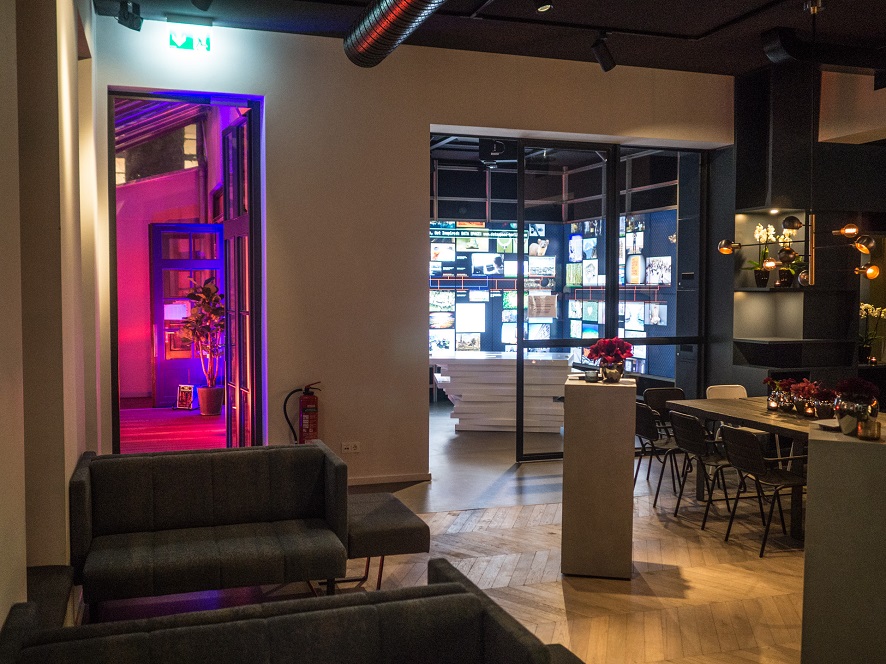 The view from the Data Kitchen is portraing the Data Room (on the right) and the terrace  of SAP Data Space. Credit: Peter Holzkorn

How did the Data Space project come about and what’s the story behind this idea?

Stefan Mittlböck: The idea of opening a café came from SAP. This café was supposed to be a meeting place and simultaneously a workspace that brings together technological innovators to advance new ideas. The core concept is that in order to stay on the leading edge of innovation, you have to create spaces beyond the confines of your familiar turf that are sources of inspiration. The location at Rosenthalerstraße 38 has two levels—the café is on the ground floor and the upper level contains space for start-up enterprises. This setup offers a setting for events and simultaneously provides a potential reservoir of creative associates. Of course, we shouldn’t fail to mention the aspect of manifesting a progressive image. 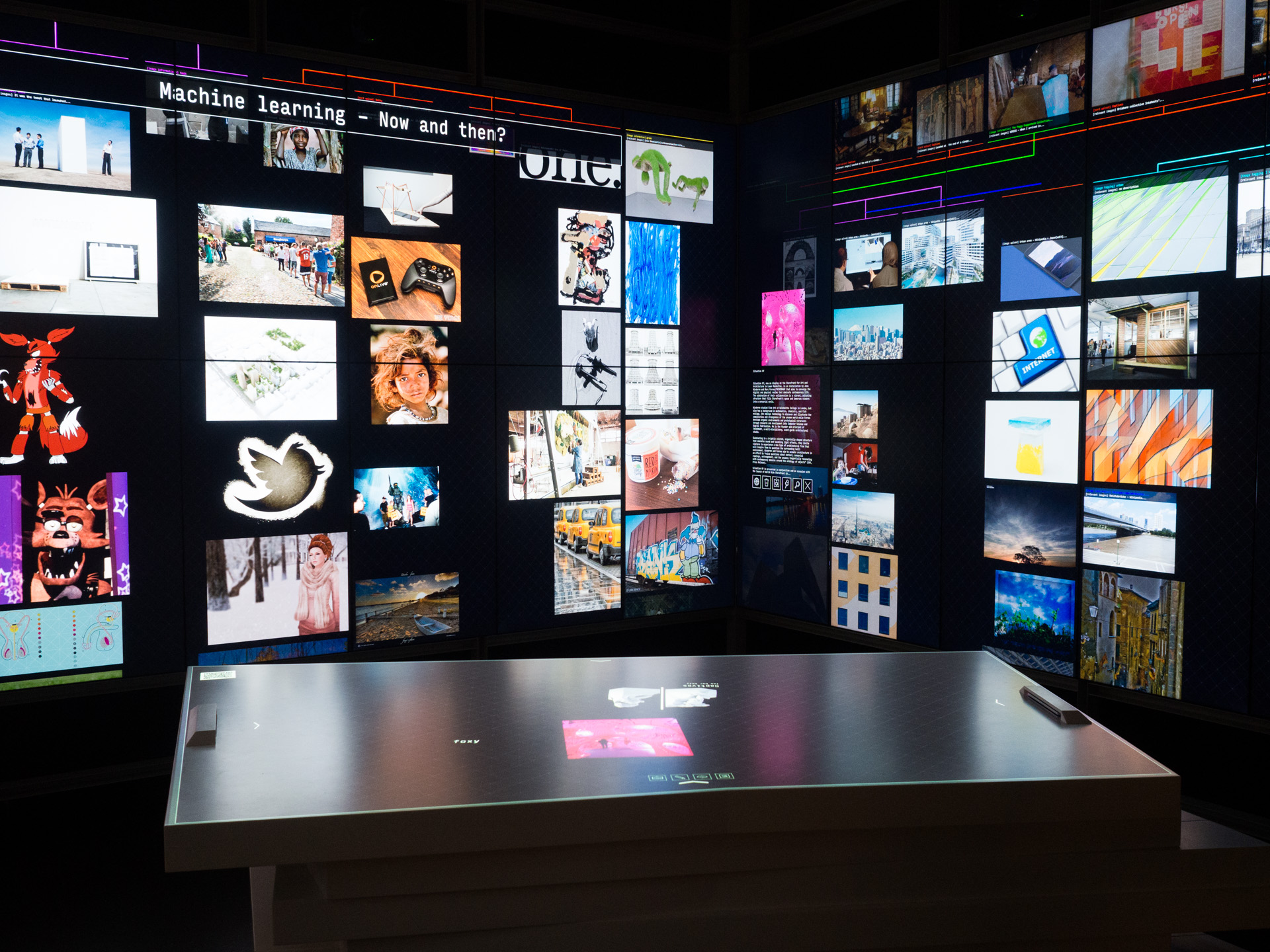 Peter Holzkorn: Data Space is the name of the entire complex. It includes the lower area, Data Kitchen, the event space named Data Hall, and then there’s the Data Room. All in all, the crux of this idea is a community of people renting space there and engaging in creative exchange in an ambience that’s conducive to it. Ideally, the start-ups should be related in some way to SAP’s core business so that there’s a potential for pervasiveness.

What role did the Ars Electronica Futurelab play in setting this up?

Stefan Mittlböck: The conception of the Data Kitchen and Data Room projects evolved naturally over a long time span. As for configuring the space, the prerequisite was for it to be possible to stage an event in the Data Hall at any time. Accordingly, the bar & event area is separate from the data Room. This is where creative processes are supposed to be triggered, and where so-called Art Thinking is what’s meant to make it happen. The table has been designed as a piece of data furniture—it consists of 12 layers, whereby each individual layer represents the demographics of one of Berlin’s neighborhoods, though this is simply a design feature and has no impact on function. 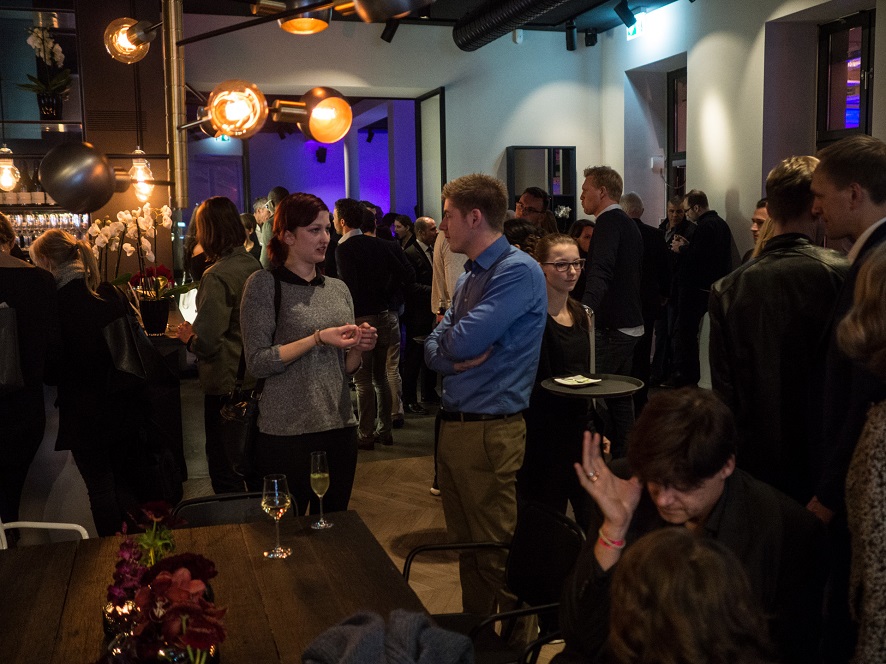 The opening of SAP Data Space draws many interested visitors to enjoy their stay at Data Kitchen. Credit: Peter Holzkorn

Please explain what the term Art Thinking means in this context.

Peter Holzkorn: As Horst Hörtner defines it, the term means that even before a start-up enterprise’s staff formulates an idea and finalizes the details, they should first generate ideas by going through a chain of free associations. And this is also the origin of the term Data Room.

Stefan Mittlböck: In contrast to Design Thinking which is a matter of coming up with a solution in response to a specific assignment, Art Thinking describes the preceding step, the point at which you need conceptioneering. Here, creative processes are designed to get this underway. So, in this sense, the table is an envisioning device.

Peter Holzkorn: There are two modes in which to use the table. Whenever there’s no special event scheduled for the Data Room, you can let the general public just play around with it, but when a start-up firm books the space for a special workshop session, then the recommended procedure is for there to be a moderator who conducts the brainstorming. S/he will have prepared the theme of the workshop in some way, maybe in the form of texts or buzzwords. In keeping with the workshops held by Hideaki [Ogawa] and Christopher [Lindinger], let’s call the prepared content Seed Cards, whereby projects or design ideas are presented to clients on actual cards they can then use in an analog process of free association. But in the digital workshops that can now be held with the table as interface, the participants can conveniently input their content, live and on site. The whole process functions without any sort of USB or interfaces; there’s no need for a particular mode of access. There’s a QR code that’s valid throughout the duration of the visit, which enables visitors to use their own tablets or smartphones to input texts and images. 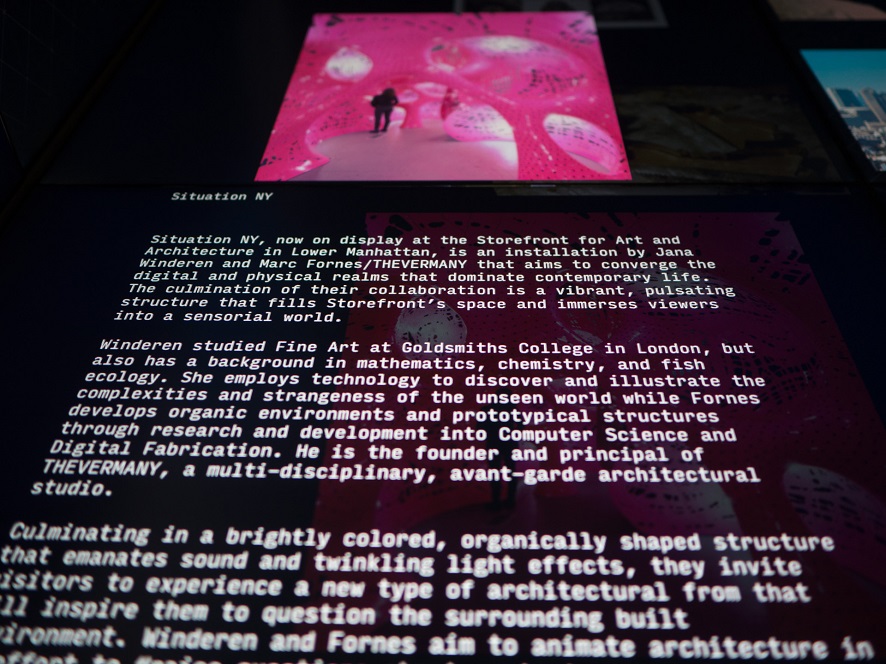 A close-up of the Data Wall depicts a result from an art thinking-process. Credit: Peter Holzkorn

So, how do you now deploy the table and the wall to get the creative juices flowing?

Peter Holzkorn: You feed the content—that is, images and texts—into an algorithm that yields associations, both obvious ones you might expect as well as surprises. In contrast to a search engine, the results that it outputs are associative and not ranked according to relevance like Google does. For example, in the previously-mentioned case, inputting the search term “water” would produce more or less a one-to-one representation of water, whereas the table would bring forth a wide array of associations such as shades of blue, tears or sadness. If you were to localize this algorithm, its position would be somewhere between Google, where the linkage functions very directly, and Pinterest, where all sorts of stuff gets spewed forth! 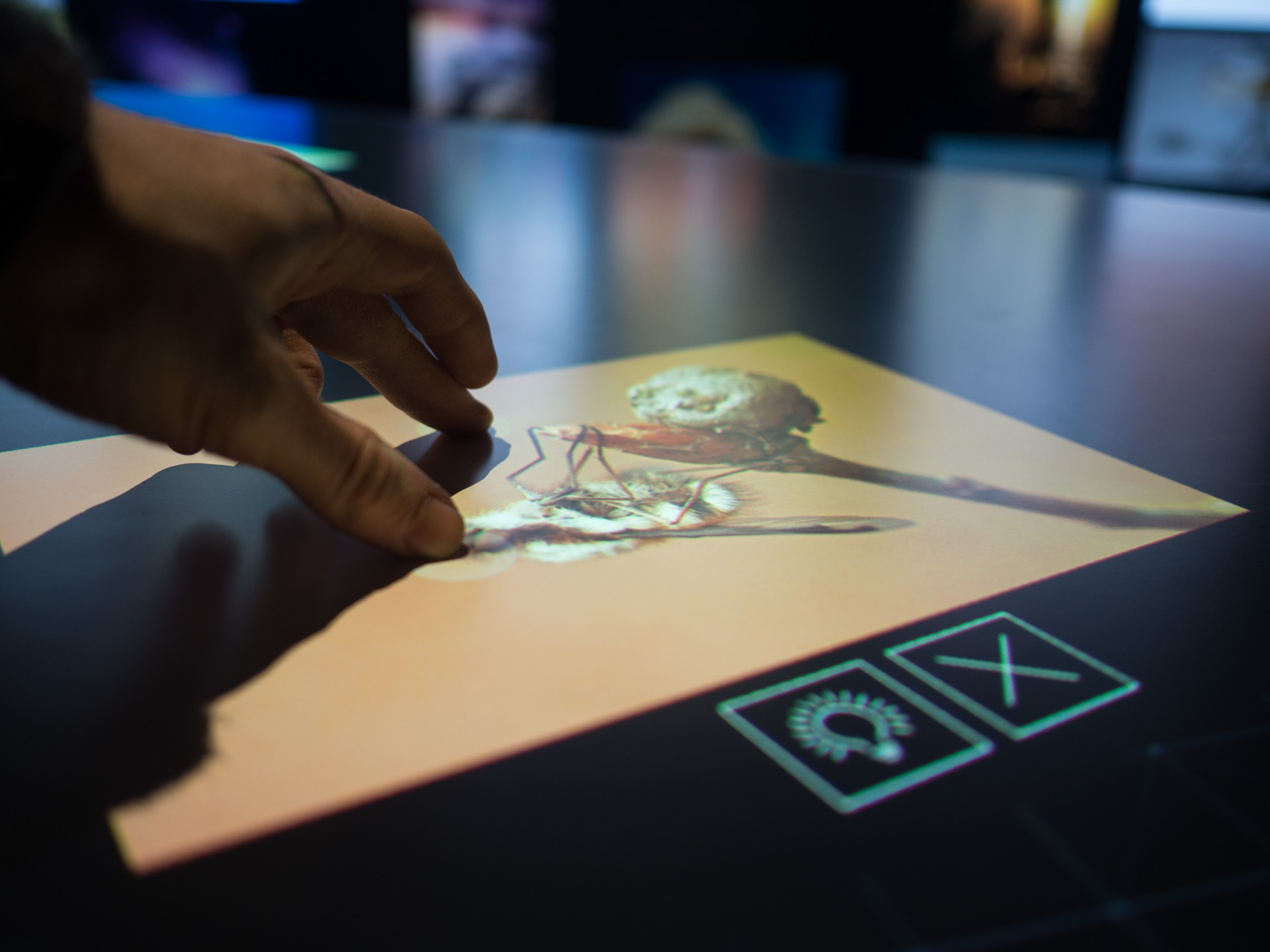 The found results can be moved by the flick of a wrist, just the same as with smart phones or pads. Credit: Peter Holzkorn

How did you establish the coordinates? What does the algorithm draw upon? It must be a huge database…

Peter Holzkorn: The database is fed by results from our meta-search engine that includes photo databases and a collection of selected blogs and certain bulletin boards that users regularly update, and thus platforms to which their proprietors and users are continually posting interesting content. To stick with the “water” example—the evaluation doesn’t need to be restricted to platforms that focus on the subject of water; instead, what’s needed is access to generally interesting content.

Clemens F. Scharfen: In addition to our online search, we also query the Ars Electronica Futurelab’s own Seedcard database containing numerous art projects with a connection to Ars Electronica. And speaking of databases: the workshop sessions are then filed as a discrete dataset that can be accessed from anywhere via a link so that, for example, the group of participants can continue working at their own home base on the results they’ve come up with. These results, such as the links to images and websites that were put up for consideration, can be found on a homepage to which only the moderator of the session has access. 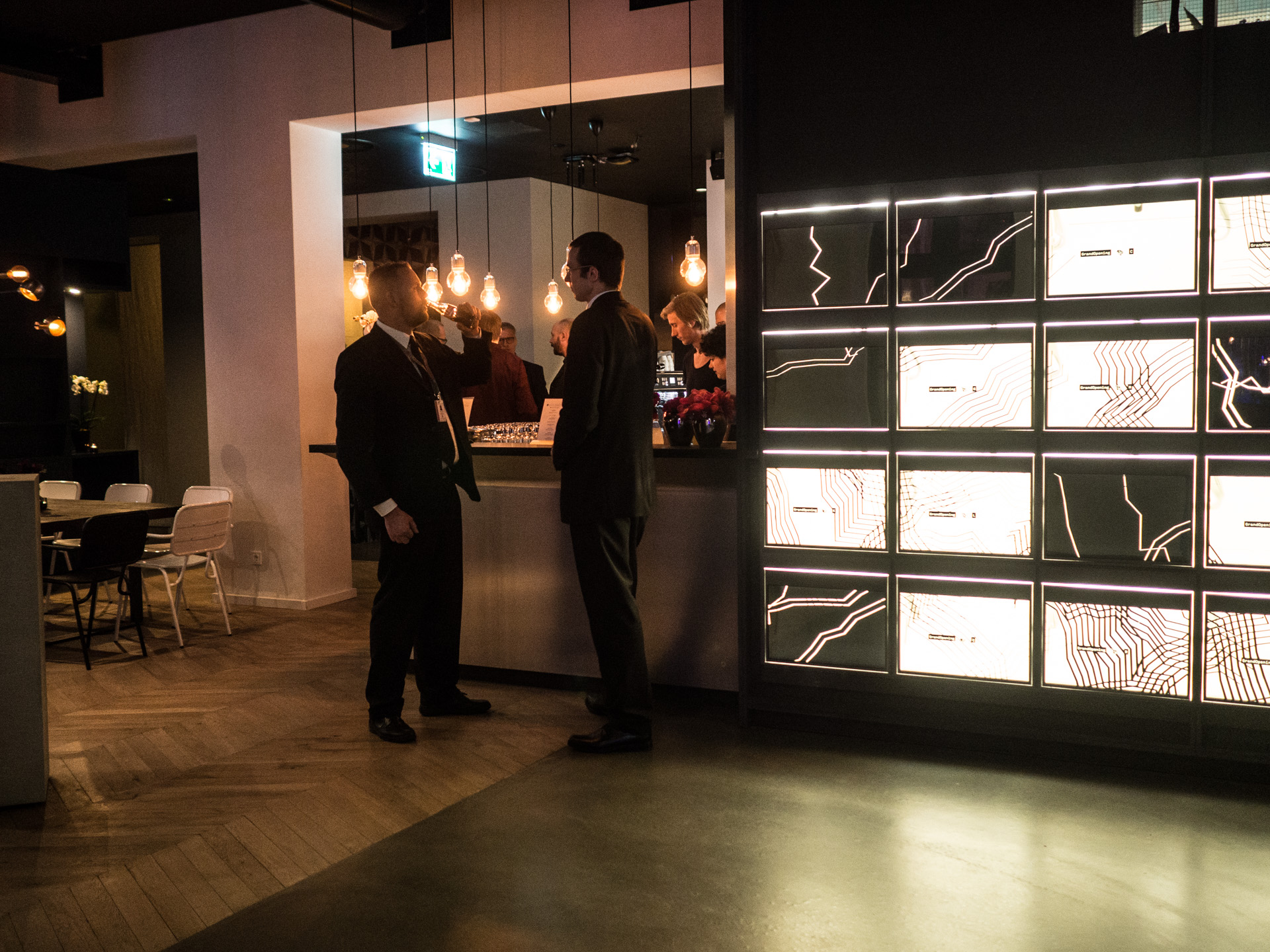 On the right-hand side there’s the “Foodwall”, designed and constructed by design furniture-manufactory artisengineering and interior architect Laura V Rave. Credit: Peter Holzkorn

Part 2 of the interview goes into the Food Wall and how guests can use an app to place their orders in advance and enjoy delay-free dining at Data Café.