Industrial Robots in the Service of Art 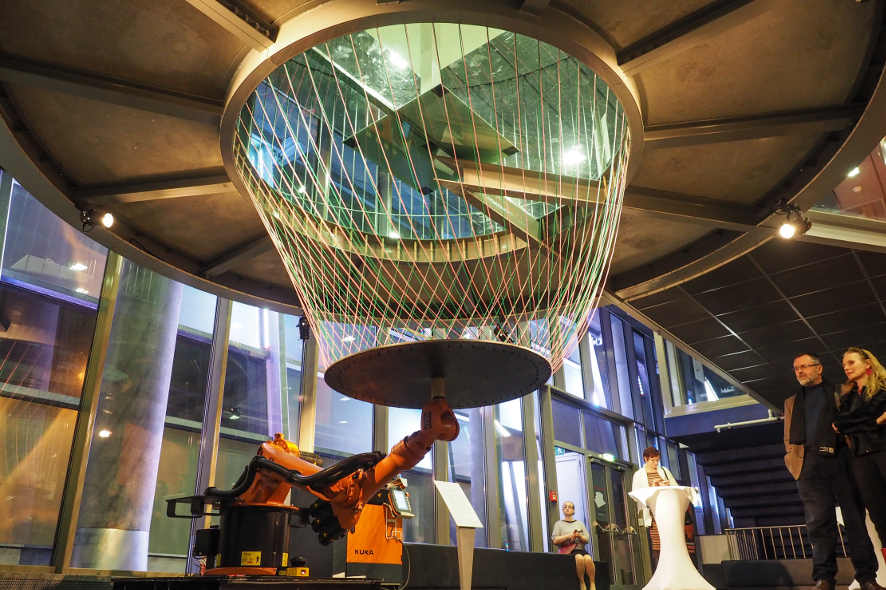 And once again, several robots manufactured by KUKA are on hand at the Ars Electronica Center—either they were used for the creation of works of art or they are themselves part of the exhibition.

When the Industrial Revolution commenced over 200 years ago, human beings began to utilize machines for the purpose of mass manufacturing. In the wake of production done on assembly lines and the Digital Revolution, the term Industry 4.0 has come to the fore in recent years. In this interview, KUKA Sales Manager Reinhard Nagler explains what this is all about and why robots are increasingly being used in artistic fields. 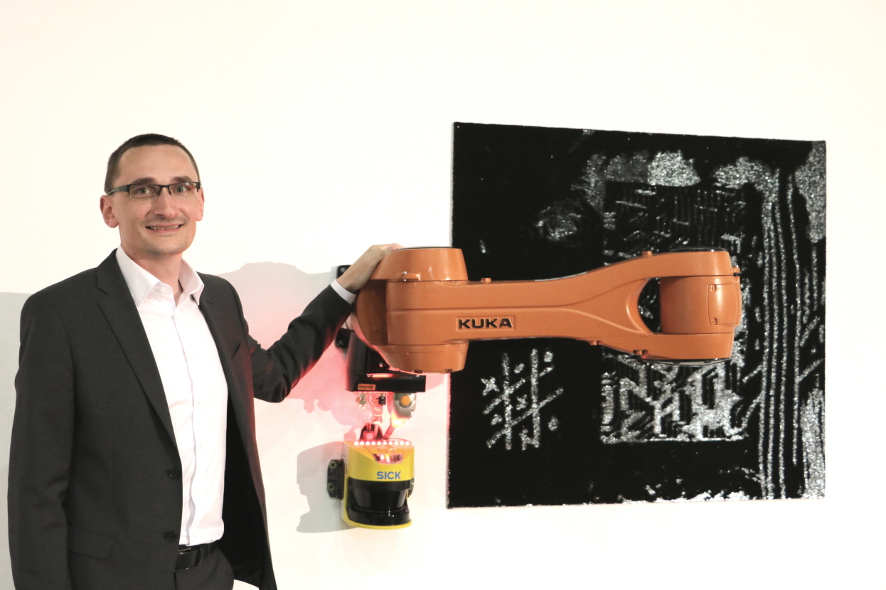 Reinhard Nagler: Industrial robots are mostly used in assembly plants. For example, industrial robots are used to build automobiles—to weld the chassis, to fasten insulation—but also to do jobs like packaging muesli bars in the food industry. For the most part, however, this takes place in factories, so the general public never has an opportunity to see robots in action. That’s one reason. We want to show the general public some of the other things that can be achieved with robotics. A second essential point is that industrial robots are always associated to some extent with potential endangerment of jobs now being done by human beings. This is another consideration that motivated us to take part in this project—simply to show that, in the future as well, we will retain the upper hand in our dealings with robots. The human being will always be the one who does the thinking, the controlling, and the ultimate coordination of the robots’ tasks.

Why are KUKA robot arms so well-suited for use on artistic works?

Reinhard Nagler: A classic industrial robot has the capability of moving its arm along six different axes. This provides the possibility of moving the payload into any conceivable position and, depending on the size of the robot, you also have a certain range within which the payload can be moved. The big advantage is that you can program a sequence of movements, after which they can be executed independently. Needless to say, this has a big appeal in the art world, where all sorts of possibilities emerge to use industrial robots.

You mentioned programming. Often, artists lack programming skills. So, how difficult is it to program a robot like this?

Reinhard Nagler: Even if someone doesn’t have the slightest idea about industrial robotics, they can take an introductory course and, in approximately a week, acquire the necessary basic skills to make an industrial robot do what they want. That’s the situation at present, but our mission for the future is to make it even easier to use this equipment. At KUKA, our vision is to eventually make operating a robot as simple and intuitive as using a smartphone is today, which, in principle, doesn’t require an instruction manual because everything’s self-explanatory and very user-friendly. That’s how far we’d like to develop robotics too. 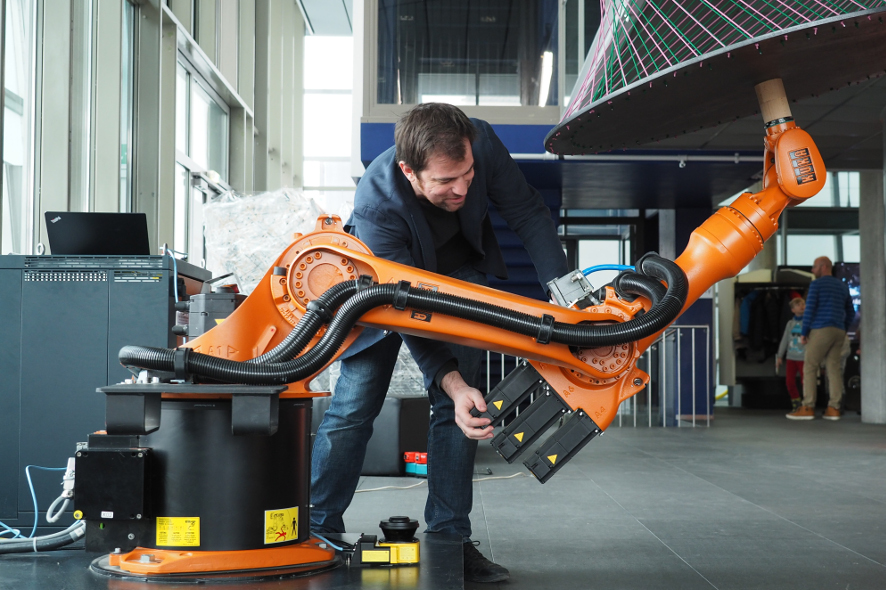 Normally, these industrial robots are deployed in mass manufacturing processes, but here they’re being used to create individualized products. Is it even worth it to do this?

Reinhard Nagler: The way it was done in the past was that a manufacturer produced a large quantity of products in an automated assembly process. The precondition was that all products had to be totally identical, which made it possible to automate all the steps. Today, there is a very strong trend towards customizing products to the greatest extent possible. Consider, for example, a cell phone case: everybody would like to have one featuring his/her own distinctive style, but it has to be reasonably priced and, thus, it can’t be too complicated to manufacture.

And this gets us moving in the direction of Industry 4.0, doesn’t it?

Reinhard Nagler: Exactly! You try to implement what’s termed intelligent manufacturing. The way an intelligent factory like this works is that you input material to be processed, you tell it how it’s supposed to turn out, and it independently seeks a suitable path through the production process. In going about this, it automatically takes into account which machines are currently in use, which ones might be in need of service at the moment and are thus unavailable, and whether it might be able to enhance efficiency by prioritizing a particular step in the production process. So, ultimately, it’s the input material navigating a route through the factory on its own; accordingly, at the end of the line, it’s the output of customized manufacturing that can satisfy consumers’ individual wishes. This is already feasible to a certain extent! There already exist factories that can do this, but there’s still a tremendous amount of developmental work to be done in order to implement this on a large scale. 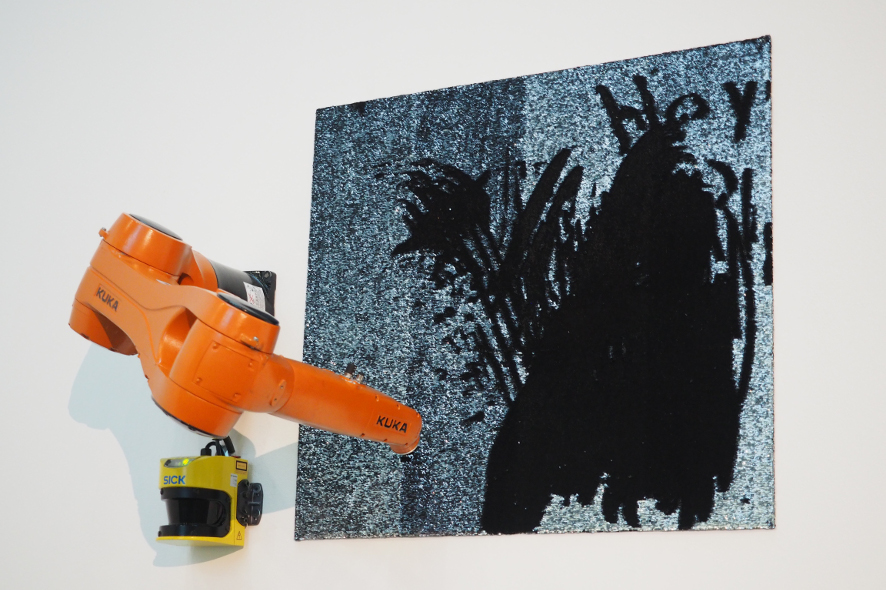 Will this method be able to prevail over conventional mass manufacturing?

Reinhard Nagler: The market will certainly remain divided. Big manufacturers will definitely take advantage of automation to an increasing extent, but there will always be smaller firms that have recourse to conventional industrial production processes. Here, I’m talking about a timeframe of 5-10 years. In 50 to 100 years, things might look a lot different. You can’t really predict this today.

Until SUN March 12, 2017 you have the opportunity to visit the KUKA robots in the “Creative Robotics” exhibition at the Ars Electronica Center!