“Corpus Nil”: A Performance by Man and Artificial Intelligence 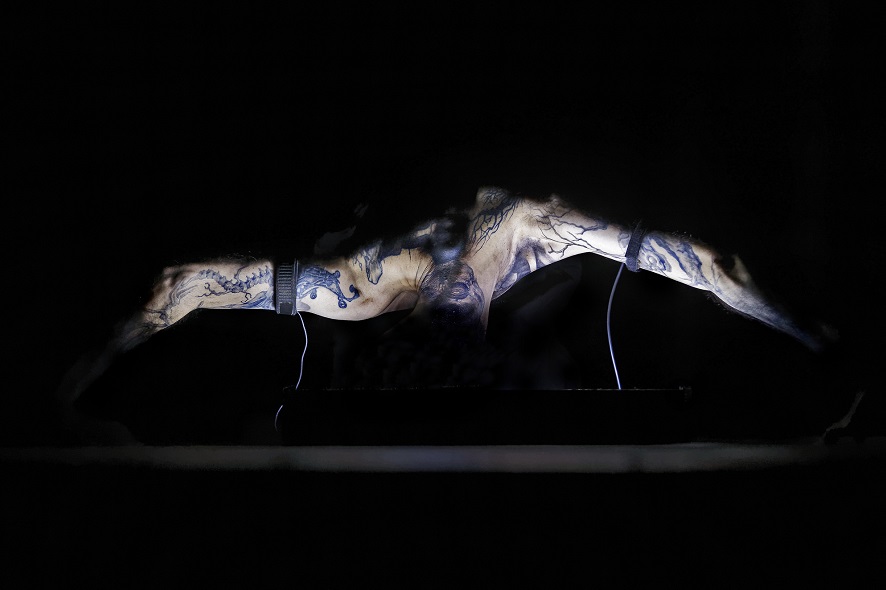 The stage is darkened. In the middle stands the artist—partially naked, partially painted black. His body is studded with biosensors that measure various data and send them to artificial intelligence software. The algorithm reacts in real time to the artist who, in turn, adapts his reactions to the machine.

In his performance entitled “Corpus Nil,” artist Marco Donnarumma impressively manifests a hybrid identity and does away with preconceptions of what it means to be either a human being or a machine. He calls it an “ecstatic celebration of the unknown” that almost resembles a birth. Indeed, the man and the machine take the stage together in a conventional sense, but what emerges thereby is a new, hybrid creature.

What exactly awaits festivalgoers in POSTCITY at his performance, its title’s significance, and why the artist began to work with artificial intelligence in the first place are all explained in this interview with Marco Donnarumma.

Your performance piece “Corpus Nil” is made for a human body and an artificially intelligent machine. How do these two come together in the performance?

Marco Donnarumma: I like to call it a choreography, a dialogue between my performer’s body and the AI machine. Technically, I wear two different biosensors which send sounds and data from my muscle to the software. The software learns the particular way I move my body by analysing tension levels, release times and torsion force of my muscle. Based on this information, the software creates sound and light patterns of its own choice. At this point, I react to the sound and light by making a new movement, and the machine in turn respond with new patterns. It is a feedback loop. And from this loop, or choreography, an alien body emerges before the audience.

What is important, though, is that the loop cannot be controlled; I cannot predict what exactly the machine will do, and the machine cannot predict how exactly I’ll move. It is a largely unpredictable feedback where myself and the machine listen to each other, trying to maximize the moment, right here and right now. Obviously the piece has a loose narrative, a general temporal structure with a beginning, a climax and an ending, but the machine and I improvise throughout the show, trying to reach together certain key narrative points. It is an ephemeral bodily experience of computational power, an experience that changes from one iteration of the show to another. 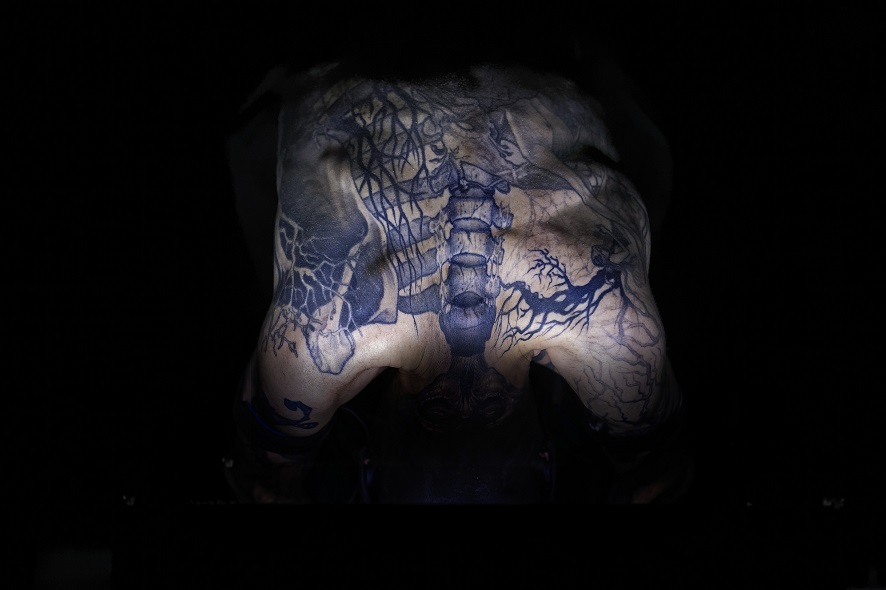 On your website, you say that the human body in the performance is “defiled” by algorithms – what do you mean by that?

Marco Donnarumma: Defiling means to damage the purity of something, to profane something sacred. At the core of our Euro-American culture is the idea of the human body as a pure, whole entity isolated and independent from any other form of life. So we tend to think of the body as an almost sacred vessel, or – as neoliberalism would have it – as the sacred harbour of individual freedom. In practice, the body has always been the object of a wide range of powers: institutional power expressed through governments and laws; disciplinary power enforced through capitalistic economic production and consumption; as well as personal power, exercised in intimate relationships. The advance of AI we witness today, spearheaded by a handful of multinational corporations, only reinforces this power dynamic.

In Corpus Nil, I wanted to profane the assumption of the body as a pure, whole entity and create a tangible experience of hybridity. A hybrid is an offspring of two different species. In Corpus Nil my body and the algorithm create a hybrid human-machine. The algorithmic system can disrupt the functions of my body at different levels – physical, cognitive and experiential. This is not a metaphor. Through repetition and rhythm, the pulsating vibrations, sounds and light patterns created by the AI software affect directly the way I – and the audience – perceive and perform my body on stage. It’s like a trance state, which I can experience only through this particular software.

Both the machine and the body influence each other, but none can really control the other. Ultimately, what or who defines the performance?

Marco Donnarumma: Interesting question. Let me ask another question then, is “control” really needed for a successful performance? The lack of control, the absence of a body which can be defined human and the loss of conscious awareness are the elements that define the performance. This, of course, can make it difficult for the spectators to rationalise what they hear, see and experience during the performance. And if there’s an aim in this artwork – and more generally in my whole body of works – it is exactly that: to create a performative experience that cannot be immediately rationalised, but instead hits you fast and hard so that it remains vivid in your memories. It is afterwards that a rational interpretation emerges, and with that, thoughts and ideas.

That’s what I strive to achieve with each performance of Corpus Nil; an experience akin to a ritual of birth, an ecstatic celebration of the unknown and the unfamiliar. I want to tear open the stereotypes and prejudices we all have towards different bodies and identities. And I want to show the potential of AI to do that. 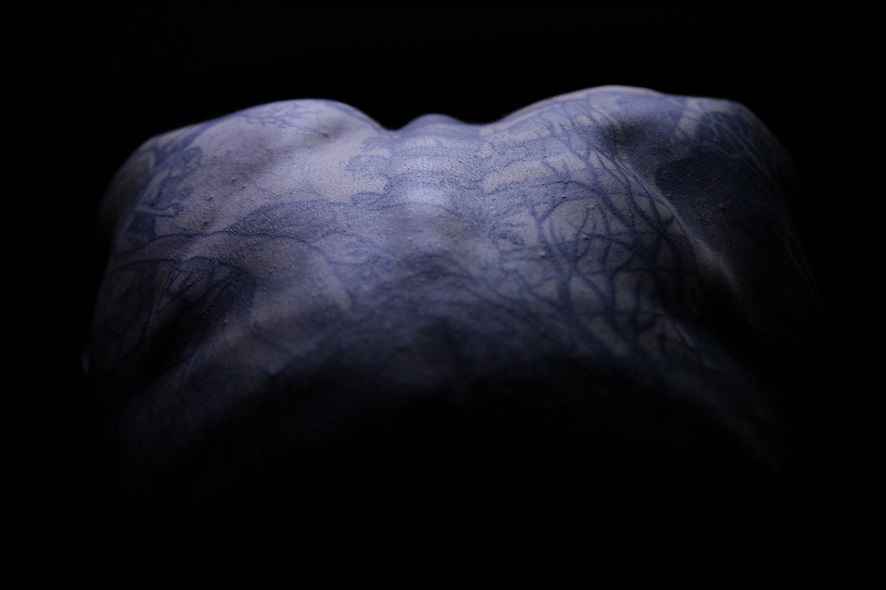 How and why did you choose the name “Corpus Nil”?

Marco Donnarumma: I have a passion for Latin, which I studied when I was kid, so I often turn to the Latin vocabulary to express a concept which I cannot express in the few modern languages I know. The Latin “Corpus” is a fascinating word; its first meaning is “body” in the broadest meaning of the term: the body of an object, a body of literature, or a living body of course. But it can also mean “flesh”, “person”  and sometimes it was used to indicate a corpse. So, you see, “corpus” is a quite rich term and it can convey a whole range of concepts, life and death, the material and the immaterial, identity and personhood.

On the other hand, “nil” or “nihil” is a very general term, which was used as the root of other, more specific words. On its own, it means “nothing”, “nonentity”. Essentially, it is a basic negation. So, I made up Corpus Nil to express the will to negate, to erase all the things we know about a body – be it a human or a machine body. Corpus Nil is about erasing the identity and the desires of the body as we know it, and create a new definition of it, a definition freed from the culture we inherited and the stereotypes we cultivate. A new understanding that opens up the human body and let it be for what it is, a hybrid, a bastard entity that takes in and feed on other people, other living things, other technologies, other algorithms.

The festival theme this year is “Artificial Intelligence – the Other I”. Your performance also works with AI – when and why did you start working with artificially intelligent machines? What is the fascination for you to combine very physical elements like dance with not only sound, but also machines?

Marco Donnarumma: Five years ago, in 2012, I was commissioned a new piece by the European Conference of Promoters of New Music. In about six months I created “Ominous“, a solo performance of biophysical music which I perform still today. That was the first time I used custom artificial neural network. In the same year I started a PhD in Computing at Goldsmiths, University of London, where I met Dr. Baptiste Caramiaux, a brilliant researcher and computer scientist from IRCAM . We started working together and soon we were exchanging knowledge on a daily basis. My expertise in biomedical engineering, music programming, performance and sound art mixed with his knowledge in machine learning, expressivity, psychology of movement and human-computer interaction (HCI) methods. We became close collaborators and friends and eventually we spent a couple of years publishing scientific research on human-computer interaction through biophysical sensors and machine learning. Finally, in 2016 after two years in the making, we completed Corpus Nil, which crystallised several aspects of our research into a single artwork.

Meanwhile, upon completing my PhD in October 2015, I moved to Berlin and started a Research Fellowship at the Berlin University of the Arts in collaboration with the Neurorobotics Research Lab. This lab specialises in creating AI humanoid robots that have physical and cognitive abilities that resemble – at a basic level – humans and other animals. Right now I’m deepening my knowledge of AI, in particular adaptive neural networks, in relation to robotics and prosthetics. This is part of my forthcoming new project; together with Ana Rajcevic Studio, the Neurorobotics Lab and Prof. Alberto de Campo we are creating AI prosthetic robots, strangely human-like machines which autonomously learn how to perform ancient rituals of purification. The first output of the project is Amygdala, an AI prosthesis learning a ritual of skin-cutting on its own body. This installation will be ready in the coming months for a premiere and tour in Europe. And then, well, my goal for the next year is to create a series of AI prostheses to perform with multiple human bodies. We are working on expanding our AI prostheses so that they can understand – and react to – expression in sound as well as in biological data.

I want to find out to what extent the human body can be hybridised with AI machines, and, vice versa, what is the limit of AI machines to incorporate the human body. And, importantly, what are the political and cultural consequences of creating and living this kind of hybrids? 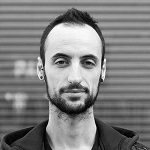 Marco Donnarumma, born in Naples in 1984, is an artist and scholar based in Berlin. Working with biotechnology, biophysical sensing, as well as artificial intelligence and neurorobotics, Donnarumma expresses the chimerical nature of the body with a new and unsettling intensity. His artworks are at once intimate and powerful, oneiric and uncompromising, sensual and confrontational. He is renowned for his focus on sound, whose physicality and depth he exploits to create experiences of instability, awe, shock and captivation. (Photo Credit: Ugo Dalla Porta, New York City, US)