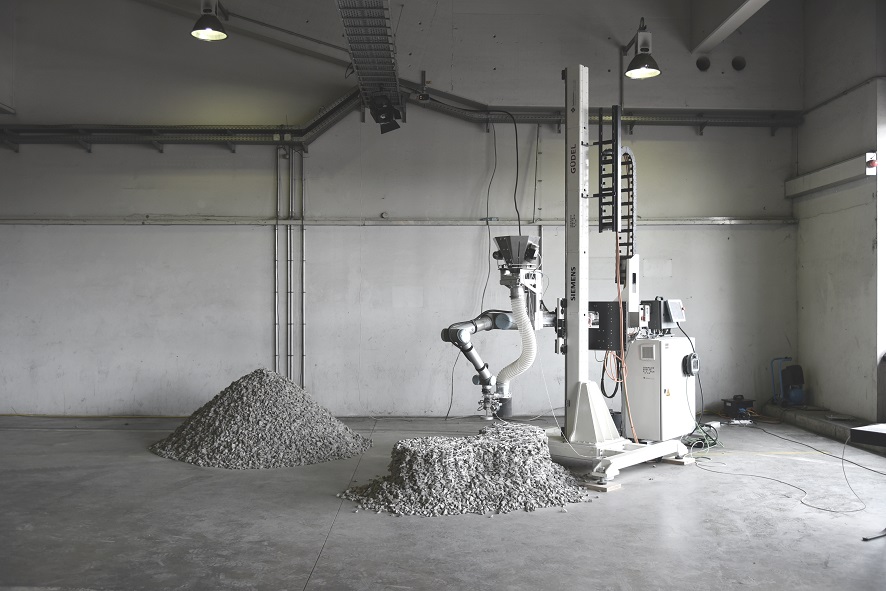 Rock Print is a project by Gramazio Kohler Research at ETH Zürich and the Self-Assembly Lab at MIT under the direction of Skylar Tibbits , whose revolutionary approach earned them this year’s STARTS Prize in the Innovative Collaboration category. At Ars Electronica 2017, the robot will build a structure right on site. It will grow before festivalgoers’ eyes over the five-day festival; finally, the thread will be pulled and the construction will be transformed back into its original constituent materials. 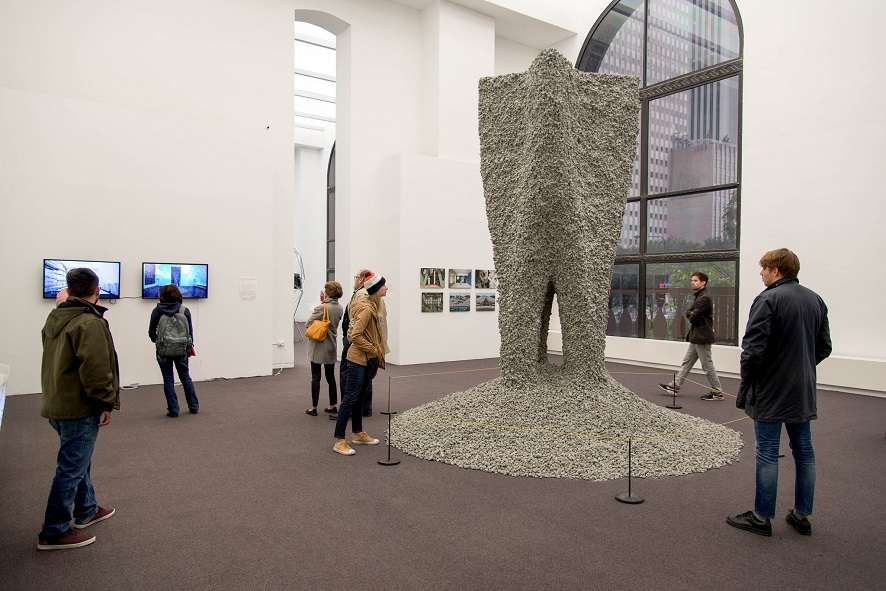 Even before receiving a STARTS Prize, your work at ETH Zürich has garnered high praise. So, tell a little about your research group and the work you do.

Matthias Kohler: Fabio Gramazio and I began our research at ETH in 2005, which means we’re now in our twelfth year. We started out small, with a minimal assistant professorship; we’ve since been made full professors. The work that we’ve done in digital fabrication and our consideration of what this is leading to in architecture, in the construction industry and in the design of our future habitats has imparted strong growth to our professorship. Meanwhile, a great deal of research is being done in this field worldwide. Our professorship now has almost 30 staff members on various levels. They’re carrying out projects both in a classic scientific context as well as, on a regular basis, in an artistic context as a means of shifting the boundaries separating these realms.

How important to you is the practical usefulness of your projects? Is this something that’s expected, or is peering as far as possible into the future the core of your mission?

Fabio Gramazio: It differs. Materialization is central for us as architects. Matthias and I have a background in digital computing as well as in classic architecture. We studied architecture in the 1990s; since the turn of the millennium, our mission has been to materialize the digital. These possibilities of programming or manipulating data into physical form or translating them into architecture are essential to us. As soon as something can be materialized, it’s the first step for us, from an architectural perspective, to create a synthesis of architectural value or value added, design, process, automation and all the additional elements that codetermine these outcomes. With certain technologies, it’s also decisive that they don’t simply remain installations; rather, that the ideas ultimately flow into the construction industry and can be applied in actual practice. Of course, we’re aware that, since construction is such a complex and heterogeneous industry, this has to entail a policy of tiny steps. Small technical advances and their application proceed simultaneously with visions and with the materialization of utopias. Rock Print is somewhere in between. It’s something that opens up a lot of possibilities but, at the same time, faces a long path into actual practice. 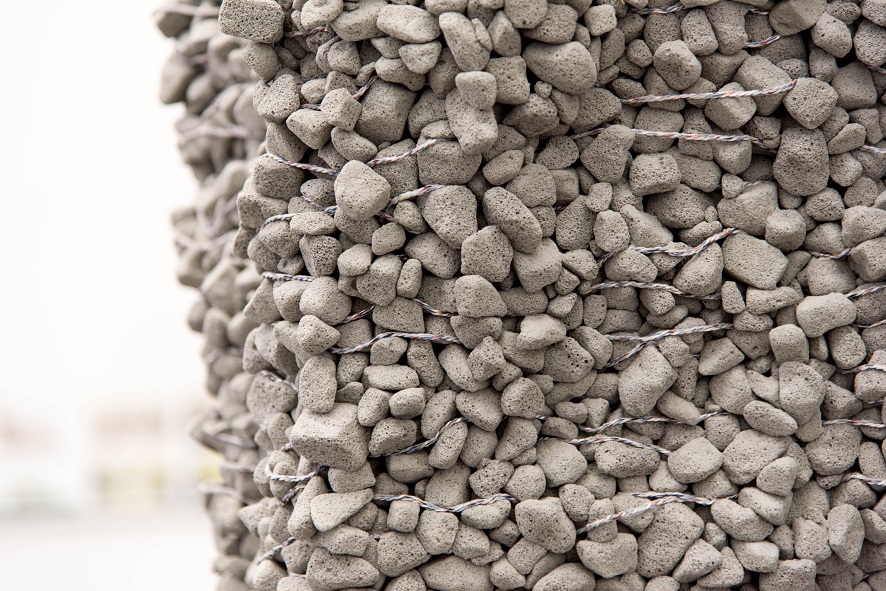 What are the sources of inspiration for your projects?

Matthias Kohler: They differ from project to project. In the case of Rock Print, it was actually scientific inspiration. There were conferences on the subject of so-called jamming, whereby certain materials are subjected to a force, after which they are no longer able to move, they become stable for the short term, and finally, when the influences of this force cease, the material becomes fluid again. This is a scientific principle that’s already been under investigation for years. This raised the question of whether this principal would actually be feasible in the dimensions of architecture, and how something like this could be translated into actual objects. So, this project was an outgrowth of this inquiry. Naturally, there are many other questions inherent in Rock Print—can a material be transformed into a building temporarily, so to speak, and afterwards be turned back into the raw material it had previously been? In this case, they’re steel cable and gravel, and thus materials available throughout the world, not high-performance materials. A major motivation in this respect is, of course, the idea of sustainability and the question of how buildings can be constructed in the future without wasting a lot of resources or degrading material due to the building process.

Considering how jamming processes could be made to work on the massive scale of an architectural edifice is a very exciting concept. Is that your character, to not be satisfied with what’s currently possible? Or where do you derive your motivation?

Fabio Gramazio: That has to do with our career path, but also with the reality of the construction industry which, due to its complexity and heterogeneity, offers very limited possibilities. We think that the technological and intellectual possibilities of this day and age call for a contemporary interpretation of architecture and construction processes, and that the right time for this is now. We have to consider the big picture. We call these phenomena demonstrators—as soon as something physical emerges, it’s something that can’t be ignored. This has far stronger appeal to architects and the construction industry than abstract ideas do. That’s why this step is so important to us that we’re prepared to venture forth with it. We’re endeavoring to ultimately get it to the point of feasibility so that this work makes an impact on the discussion and, in the long term, on the industry as well. I would say that, as a result of the tradition that we’ve built up in the meantime, interesting means are now at our disposal. Interdisciplinary work is, of course, central to this, which is also evident from developments over the last 12 years. At the outset, we began with what we could implement on our own, primarily experiments with industrial robots. And this expanded over time because certain projects called for very intensive and open collaboration with specialists in order to be successful and to assume a material form. This work can be situated solidly within an architectural tradition in which architects are responsible for synthesis. You have to be wild, but at the same time competent enough to read the various signs of the times, to amalgamate them and, in the end, to create a biotope in which this cooperation can succeed. 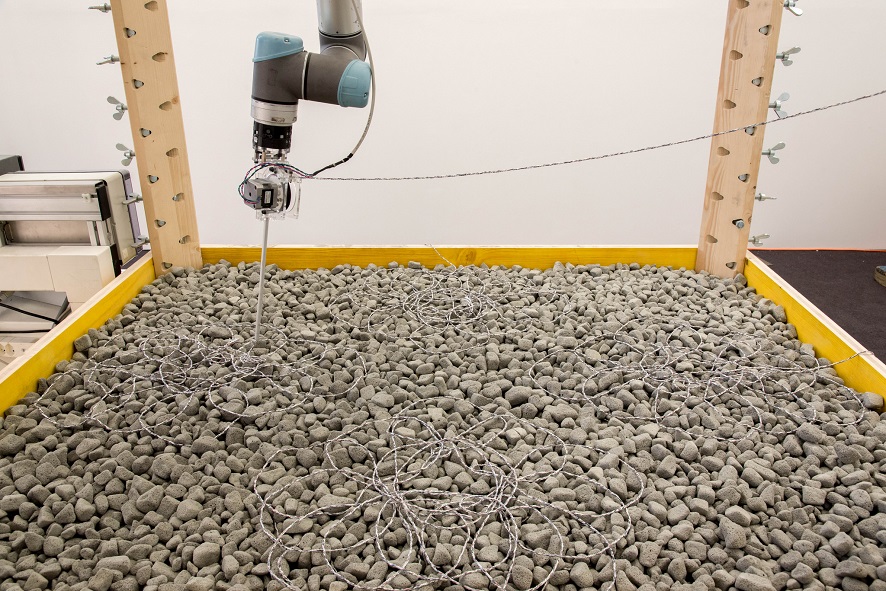 What’s on the horizon for you two? Are you already working on new projects?

Matthias Kohler: Yes, there are a few concrete scenarios we’re working on. We’re interested in implementing installations on an architectural scale, an effort to which the Rock Print project has contributed. Is it possible to build such a structure so that it’s also aesthetic? In Rock Print, it’s very interesting that the character of the pebbles remains intact but, at the same time, the result is a structure you can live in or walk through. And this is no trivial matter—in light of the safety precautions alone—and it’s also not easy to calculate. In the future, we’ll have to tackle these challenges to actually see whether such a project can be implemented on a larger scale. And we’ll be simultaneously getting involved in projects that bring other questions to a head the same way that Rock Print has done. We consider this important for the development of a future, possibly digital construction culture.

Ever since it was founded in 2005, Gramazio Kohler Research, a group at the ETH–Swiss Federal Institute of Technology in Zürich headed by Prof. Matthias Kohler and Prof. Fabio Gramazio, has been doing trailblazing work in the fields of robotics and digital architectural construction. Their robotics labs and projects ranging from prototypes to building elements have inspired architects and scientists to explore the possibilities of the industrial robot as the universally deployable tool of the Digital Age.