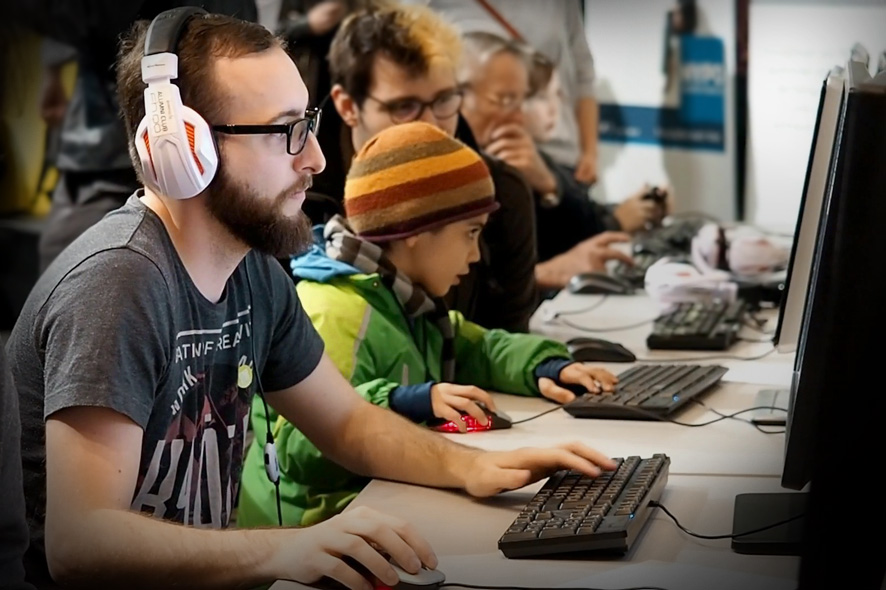 The scholarly works that are receiving support from the Internet Private Foundation Austria (IPA) are still in the process of emerging; nevertheless, two of the six subsidy recipients in 2017 have consented to an interview to provide initial insights into their fields of research. Harald Koberg’s work “Representations of Digital Gaming” scrutinizes computer gaming communities—how members see themselves and are seen by others. “Simulation of different selfish mining strategies in Bitcoin” by Simon Mulser deals with the cryptocurrency, the blockchain technology underlying it, and a strategy whereby special attacks enable users to take advantage of other so-called miners. “These two scientific works are indicative of netidee’s tremendous thematic breadth, and I’m especially pleased that Harald Koberg’s work is the first one we’ve even supported in the field of cultural anthropology. Not least of all, this is an expression of the internet’s increasing proliferation in our daily life,” said Ernst Langmantel, Foundation chairman and the man in charge of netidee.

What kind of people do you consider in your empirical study “Representations of Digital Gaming,” what questions do you pose, and what do you aim to find out?

Harald Koberg: The point of this investigation is to better understand the social significance of digital gaming. At this point, scientists have a lot to say about the impact of these games, about their pedagogical importance, or about narratives in computer games, but we know too little about how the practice of digital gaming is embedded in a social environment. This is why I’m talking to players and people in their milieu. They include people who play competitively many hours a week, but also those who just like to play for fun on their tablet or smartphone. I’m interested in discussions about gaming, watching kids play together, and also following adults going head-to-head in tournaments. What I’m interested in is how they perceive their own actions, with whom they talk about gaming, and what opinions they’re confronted with. And I’m also interested in the perceptions of outsiders—mostly parents, teachers and social workers. Needless to say, this is a big field, but more and more individual thematic sectors crystallize out of it and then I proceed to focus on these areas. These are phenomena such as stigmatization tendencies, gender, and new forms of communication and language that can foster identification but, of course, can also lead to marginalization.

You mentioned different perceptions among players and non-players. What stereotypes are still in circulation these days?

Harald Koberg: Based on my initial interviews, I can say that it’s very surprising what a strong impact many stereotypes still have. For example, two young men—independent of one another—told me that, outside of gamer communities, they talk more about games when they happen to be involved in a relationship. When a single man remarks that he likes to play computer games, then this is immediately regarded as the reason why he’s single. But images of addiction-endangered, asocial gamers still have strong acceptance and force players into a defensive attitude. In many instances, this leads to very little being said about digital gaming outside of gaming communities, despite the fact that, for many young people as well as adults, this is one of their most important leisure activities.

The proliferation of the smartphone has made digital gaming much more visible in the public sphere. Is gaming nowadays something done in stages while you’re on the go, or is it still for the most part a long-term preoccupation done at home?

Harald Koberg: Mobile games, above all, have massively increased the propagation of digital gaming. Players now include more people in every age bracket, and the market is now characterized by groups such as women over 40, who previously had scant interest in this medium. The fact that the success of small mobile games hasn’t really impaired the popularity of more sophisticated, complex games is repeatedly demonstrated by the impressive sales of game consoles and major productions. But smartphones have significantly changed the public perception. Outsiders notice all these forms of gaming, and here they often don’t even differentiate between games and other forms of entertainment such as YouTube viewing and messenger services. It’s also interesting to note that in my interviews with players of more elaborate games, they repeatedly distance themselves from simple cell phone games and sometimes even express concern that what they see as simple, stupid games could impair the reputation of “real” games. 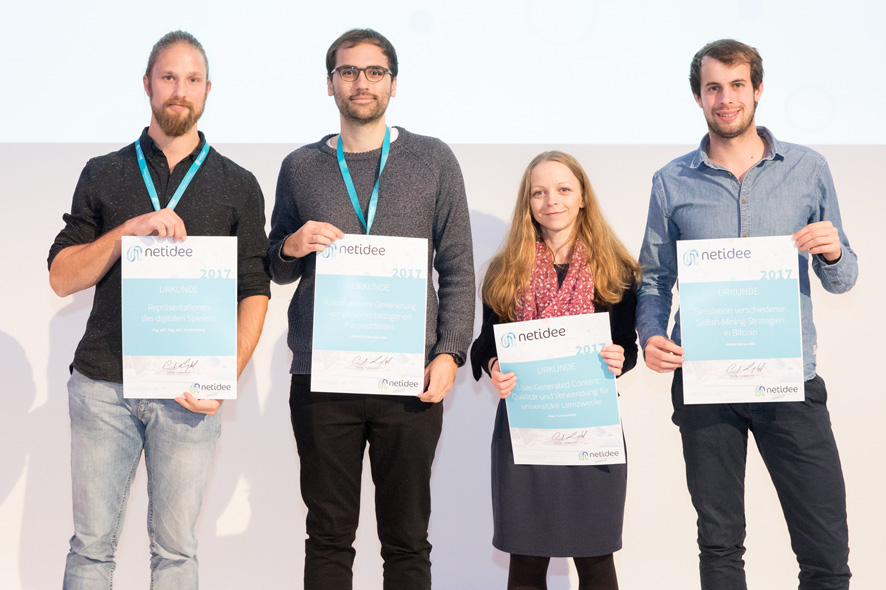 Four of the six authors of the scholarly works that received support in 2017. From left to right: Harald Koberg, Julian Schrittwieser, Corinna Raith and Simon Mulser. Credit: netidee.at

So, on to simulation of different selfish mining strategies in Bitcoin. You’ve developed a tool, Simcoin, to help you simulate blockchain networks for your master’s thesis. What’s the subject of your investigation?

Simon Mulser: In my master’s thesis, I’m investigating the so-called selfish mining attack. This is defined as an attack on the mining process whereby the attacker can increase his relative profit from mining as compared to the other miners. The miner does this by holding back blocks he’s found and later using them to match or overwrite the blocks of other miners. Generally speaking, the idea hidden behind the attack is that the rest of the network wastes its computing power on blocks that don’t ultimately end up in the blockchain. The attack was first described in 2014, and high-performance strategic variations of the selfish mining attack were found in later research.

Please describe the various strategies of the selfish mining attack.

Simon Mulser: There are ultimately an infinite number of strategies, but only about a dozen of them make sense. The original strategy invented in 2014 is simply called selfish mining. Then, there are, for example, trail stubborn strategies in which the miner basically behaves the same way as in selfish mining. Plus, the miner doesn’t accept new blocks that were found by other miners, and, instead, attempts to reduce the gap with respect to the blockchain. This strategy describes the behavior of a miner when he himself finds a new block or when the other miners find a block. If he himself finds a block, then this strategy determines whether this block is sent out to the network or not. On the other hand, if the other miners find a new block, then this strategy determines whether to build upon this block or not. This behavior is the opposite of the normal, honest behavior of all other miners, who always build upon new blocks that they receive from the network and immediately send out blocks they themselves find.

Simon Mulser: Yes. The results show that the selfish mining attack works, and they’ll be published as soon as my master’s thesis is finished. These are the results that we expected and they underscore the relevance of the selfish mining attack. Perhaps there are those who are now asking whether such an attack has already been carried out—for example, targeting the cryptocurrency Bitcoin. A large-scale selfish mining attack has never been observed in a publically used blockchain network. The explanation that’s probably the most plausible, although scientifically unproven, is that the consequences of such an attack are difficult to predict. After all, the attack has to be sustained for it to be profitable. In the meantime, however, the currency’s price could crash as a result of the attack and the attack thus wouldn’t pay off for the miner. So, as you can see, the selfish mining attack is still an open field of research. Generally accepted, promising countermeasures to selfish mining still haven’t been found yet. Accordingly, the blockchain developers are constantly endeavoring to enhance the security of the chain by steadily improving the blockchain protocols and thus further diminishing the viability of an attack.

A netidee special prize will be awarded once again this year in the Prix Ars Electronica’s u19 – CREATE YOUR WORLD category. Young people in Austria under 19 years of age are cordially invited to submit their internet-based ideas for prize consideration. The winner receives the netidee 2018 and €1,000 in cash. The extended entry deadline for the u19 category is March 19, 2018. Complete information is available at ars.electronica.art/u19/prix.

OUTLOOK: netidee’s Call13 for projects and subsidies will once again make €1 million in funding available. This call for applications runs until the end of April 2018: www.netidee.at