BR41N.IO Hackathon for Creative Minds: The Direct Wire to the Brain 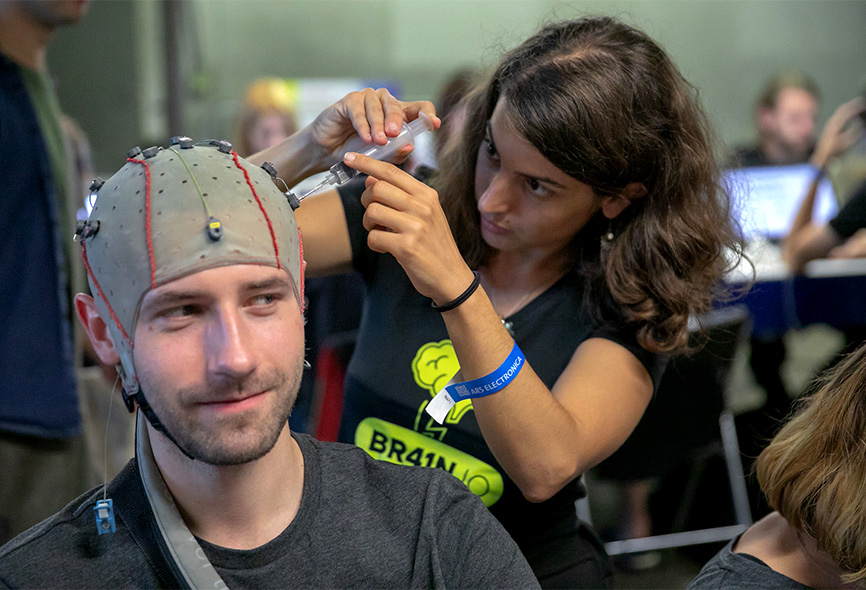 This year again, the BR41N.IO Hackathon at the Ars Electronica Festival is aimed at around 100 hackers, designers, artists and makers – creative minds from a wide variety of disciplines from art to science. There are not only cash prizes of up to 1,000 euros to be won – each participant also receives a festival pass free of charge. Christoph Guger, CEO of g.tec, tells us in an interview which teams will be participating in the 24-hour BR41N.IO Hackathon in the middle of the media art festival this time and what you can do with a Brain Computer Interface (BCI). A tip in advance: If you not only want to watch the POSTCITY Linz, but also participate, you should register as soon as possible: br41n.io/Linz-2019

At the BR41N.IO hackathon there will be different teams again – what exactly will you be able to control via the brain-computer interface in 24 hours?

Christoph Guger: First of all we have the project called “Unicorn Speller: Smart Home”, for which you can register on br41n.io/Linz-2019. Arduino can be used, for example, to control power sockets and BCI can be used to switch electronic devices or lights on and off, if you concentrate on one of the self-designed icons on the screen. The interface can also be combined with “smarter” things of a smart home. Here people can let off steam, be creative and bring in other expertise – perfect for a hackathon.

The team “Your Hacking Project” will dedicate itself to the projects brought along and the connection with the Brain-Computer-Interface. Last year we had a hacking project from music experts who used the BCI to influence and compose music by thought. Ideal for people who deal with music and programming. At the Hackathon in Banff, Canada, we had hackers who connected a LEGO Mindstorm robot to the BCI. It turned out to be very nice things!

What kind of ball is that? Can you control it?

Christoph Guger: That’s right, a robot ball! The team of “Unicorn Sphero” will be able to coordinate one of these robot balls via the brain-computer-interface – so, where it should roll to and whether the ball turns its lights on or off. On the one hand, this is a programming project that allows you to immerse yourself in robotics in a playful way – but if you pour paint over the robot ball, you can quickly create colorful pictures with these balls. This also produces nice results when several festival participants join in via BCI and paint a picture together.

At “Unicorn Painting” two years ago, the artist Dragan Illic showed us at our hackathon at the Ars Electronica Festival what other possibilities there are to paint pictures using a brain-computer interface. He has connected a huge industrial robot with several dozen colored pencils on the gripper arm to the BCI and made beautiful paintings with his brain activities. It won’t be that big, but we will use the measurement data to paint pictures again.

A team will also deal with the “fNIRS and EEG Control”… What can you do with it?

Christoph Guger: This is the first time this year that we also feature fNIRS, functional near-infrared spectroscopy. This works in a similar way to magnetic resonance, except that it is portable. Basically, LEDs light up in the brain, which can be used to measure the blood saturation of different brain areas. Where there is more blood, there is more thought. In combination with the EEG, so many functions can be extracted from the brain. With fNIRS one can recognize pain, finger movements rather with EEG – if one coordinates both measuring methods, one can make interesting projects with it.

Also for the gamers among us there is an own team, which uses the direct interface to the brain!

Christoph Guger: “Unity Games” are always cool, you can program virtual reality games with the Unity platform, send commands from the brain to the game and use other interfaces like an Oculus Rift or a HTC Vive. At the Hackathon in Japan two players played a kind of “Super Mario” together – one via keyboard, the other via BCI. A nice example of how to use brain-computer interfaces, because they could only win if they helped play together.

At Flight Control, we control a drone with BCI! A great project we already had at the Ars Electronica Festival Hackathon: Using BCI, you “think” of a person who has to be found in the festival hustle and bustle, and the drone then flew until it found the person in question via face recognition using the built-in camera.

What’s Dream Painting all about?

Christoph Guger: That’s really what it sounds like: Painting pictures in your sleep. The BCI can then be used to reconstruct which areas of the brain are currently active, and pictures can then be created on the computer. In a sleep laboratory in Munich we once did an exciting experiment where someone dreamed of controlling a robot, and the signals from the BCI then controlled a real robot in Barcelona. That’s what we tried at a hackathon, one person slept for a few hours, but unfortunately we came to the conclusion that the BCI wasn’t switched on. :)

What other cool projects can you think of that we’ve forgotten now?

Christoph Guger: At a hackathon in Banff, Canada, we once had a rather interesting project: Unity Rehab, which will also be here in Linz. Here we are creating a Unity-based game that can be used for rehabilitation purposes. Back in Banff, a project was created in which two virtual “neurosurgeons” with a head-mounted display and a BCI were able to simulate an operation. This training setup was developed within the 24 hours for Unity and won first prize.

And then there is the project “Gin Tonic Robot” – the BCI measures how stressed a person is. Depending on whether you are relaxed or tense, the robot then selects the mixing ratio of gin and tonic. With “Orthosis Control”, on the other hand, it is possible to use BCI to move a 3-D printed orthosis, which is used, among other things, to relieve limbs. This has a serious motive to think of the left hand and a motor starts to move it – a paralyzed patient could move her/his limbs again by putting this apparatus over it. And then there are two teams working on redesigning the brain-computer interface, which you put on your head like a hood.

How can I imagine that, do I need programming knowledge for the Hackathons?

Christoph Guger: We basically come to the Hackathon at the Ars Electronica Festival with 30 such Unicorns, our Brain-Computer-Interfaces. All the hardware you need to measure brain waves is included. And we have a Unicorn suite as a programming environment with which you can already try out your first ready-made applications. With the UDP protocol, you can also send various messages to other devices. So, for example, if you “mentally” press a symbol on the screen, the message is forwarded via UDP, where the light gets on. You can adjust this quite easily in this software, you don’t need any programming knowledge.

But if someone really wants to program, it works in .NET and C APIs, or even SIMULINK – an easily accessible rapid prototyping environment, with which you can actually create applications very quickly. There is also a Python interface, because the signal processors are often used to Python. Basically all possible toolboxes can be combined with the BCI! If you can program in Unity, you can quickly realize games or simulations with it. The participants can also simply take their hardware with them or even code fragments that they have already developed and then simply add the BCI!

How does a hackathon actually work?

Christoph Guger: It is important that people register with us in advance so that we can put together the various teams. This is now possible at br41n.io/linz! At the Hackathon from SAT September 7 to SUN September 8, 2019, in the POSTCITY Linz, Austria, we start with a short theory introduction, so that you can understand a bit how BCIs work and what you can do with them. Then a practical introduction follows where you can really measure and work yourself. Here you’ll learn how to mount and calibrate the brain-computer interface on your head so that data can be output in real time. And then it really starts to hack. From Saturday noon on, you have 24 hours to think about a goal together in a team and then realize it.

It is therefore particularly advantageous if different expertises come together. Usually a hardware developer is good, a programmer and a software developer are perfect, someone who takes care of the user interfaces, the concept, the artistic aspects and the presentation to the jury. Capturing the whole making process in pictures and videos, i.e. documenting how and why one reaches the goal, is also very important when it comes to evaluating the projects. Many people work all night long, so there is always a good group dynamic.

Who evaluates the projects and what can you win at the BR41N.IO Hackathon in Linz?

Christoph Guger: For the Hackathons we have again been able to get IEEE brain as a sponsor – a worldwide organization that promotes neuroscience and projects around the brain. In addition to cash prizes of up to 1,000 euros, there will again be an invitation to conferences such as this time in Chicago, where you can present your own project. And, of course, every participant will also receive a festival pass to the Ars Electronica Festival free of charge.

In the jury are: Michael Altrichter from startup300, known from the Austrian television program “2 Minutes 2 Millions”, where start-ups have to convince investors of their company idea. Alois Ferscha from the “Institute of Pervasive Computing” at Johannes Kepler University Linz will be there, as will Alexander Egyed and Christoph Hintermüller from JKU Linz, Christa Sommerer from University of Art and Design Linz, high-tech business consultant Mikhail Arshinskiy, Thomas Haslwanter from FH Upper Austria Campus Linz, where medical technology is at stake, Chris Bruckmayr from Ars Electronica Solutions and me, too, will be looking at all the projects! I’m already very excited! 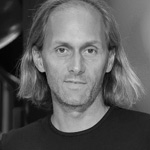 Christoph Guger is the founder and managing director of g.tec medical engineering GmbH. He studied Bio-/Medical Engineering at the Graz University of Technology and the Johns Hopkins University in Baltimore, USA, where he developed the first Brain-Computer Interface, which records and processes brain signals in real time.