Trans*Plant: May the Chlorophyll be with/in you 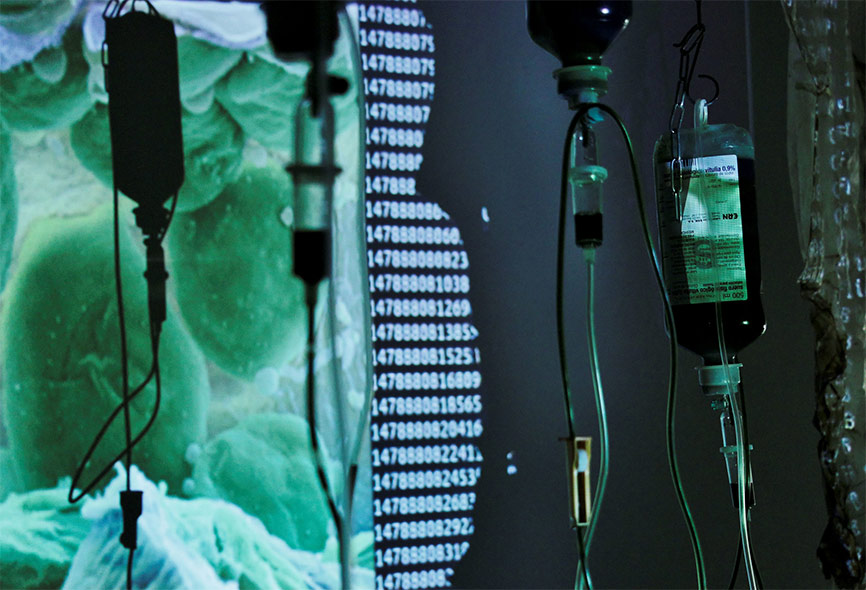 Several weeks of reading, writing, thinking, being creative and driving the own project forward. Once a year, the European Media Art Platform (EMAP/EMARE) awards several residencies to European media artists in the fields of digital media, Internet and computer artists, filmmakers and those who work with media-based performances, sound or video, robotics or bio-art. EMAP supports their research, production, presentation and distribution of media art in Europe and beyond.

This year, the Spanish group of artists Quimera Rosa, in collaboration with Ars Electronica, has stationed itself in Linz, more precisely in the Atelier Salzamt next to the Danube, below the castle of Linz and diagonally opposite the Ars Electronica Center. In this 18th-century building, which used to serve as the administration building of the imperial salt warehouse, several artists’ studios are now furnished with living quarters. And this is exactly where we met Quimera Rosa and talked about their project “Trans*Plant“, which will be on view during the Ars Electronica Festival 2019 from September 5 to 9, 2019 at the EMAP Group exhibition in POSTCITY.

What is your project “Trans*Plant” about?

Quimera Rosa: With the installation “Trans*Plant: May the Chlorophyll be with/in you”, which we are exhibiting at POSTCITY, we would like to present our multi-year project “Trans*Plant” to the visitors and make what we launched in 2016 easier to understand. For three years, we carried out various transdisciplinary experiments, all of which dealt with the transition from humans to plants in various forms. We want to bring human and plant closer together and take many disciplines such as art, philosophy, biology, ecology, physics, botany, medicine, care, pharmacology and electronics to our aid. Originally we come from the performative field, where we deal with themes such as identity, sexuality and gender. That is also part of this project.

So human and nature belong together?

Quimera Rosa: We believe that the concept of nature has evolved historically to separate humanity from the rest of the world. In this perspective, nature is not really “natural”, but is created by us humans. We try to abolish this border.

“It is strange that we have accepted that an individual, the human being, limited to the outside world by the skin, is a living being, but the planet Earth as a whole is not.”

With our project we try to break down this duality in western thinking: Woman and man, heterosexual and homosexual, natural and artificial, white and not white, normal and abnormal, human and animal, science and witchcraft. These dualities can be continued on an almost infinite list. Everything belongs together. All life is a mixture of everything – people, machines, plants, animals and so on.

So we also have chlorophyll in our blood?

Quimera Rosa: In December 2017 we implemented a bio-hacking project and carried out the first intravenous chlorophyll injection in the Galerija Kapelica in Slovenia, thus triggering a discussion about a transition process from humans to plants. This, of course, creates fears, fantasies and judgments, which in turn trigger a debate about the identity system. A self-experimental process is not an individual process, but always a collective one: obtaining a pure chlorophyll molecule is about as difficult as obtaining testosterone from the pharmaceutical and biomedical industries or the legal and health system. The whole of life is patented.

Chlorophyll is meant here also very symbolically – it is the green blood of the plants. They can use it to transform light into energy. We have oxygen in our red blood, which flows through our body. In a way, we humans are connected to plants. In our intravenous chlorophyll injection we use our body as a medium to start thinking about this separation of human and nature.

In your project you also address a possible future scenario…

Quimera Rosa: Exactly – for example March 2036: The annual earth resources are exhausted and we are experiencing the final shutdown of the global Internet. A little more than a year later, in December 2037, a bio hacker community decides to connect a VPN network to mycorrhiza, a symbiosis of plants and fungi. The network enables earth plants to exchange nutrients and information. A symbolic alliance trying to reverse this situation.

Our installation at the Ars Electronica Festival is based on haptic and hybrid low technologies. Videos, written narratives, scientific excerpts, mycorrhiza interacting with the audience, and biotechnology materials around Do-it-Yourself (DIY) and Do-it-with-Others (DIWO) are part of the elements linking the theme and our transdisciplinary and experimental laboratory installation. 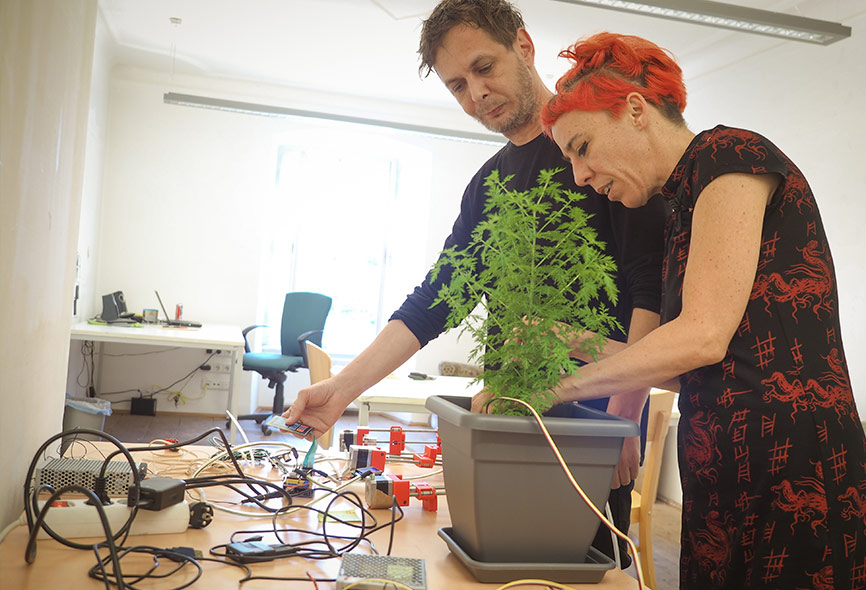 Quimera Rosa (ES/AR/FR) is a laboratory from Barcelona, Spain, that conducts research and experiments on body, technology and identity. Conscious of transfeminist and post-identitarian discourses, they try to experiment with hybrid and flexible identities in order to blur the boundaries of the dualities of Western thought.

EMAP/EMARE is co-funded by the Creative Europe Programme of the European Union.

Note: If you would like to walk through POSTCITY together with the artists, you will have the opportunity to do so during the Ars Electronica Festival 2019 during the Artist Walk with Quimera Rosa on THU September 5, 2019, 2:00 PM. Registration at https://ars.electronica.art/outofthebox/experts-quimera-rosa/. Information on other tours can be found at WE GUIDE YOU.