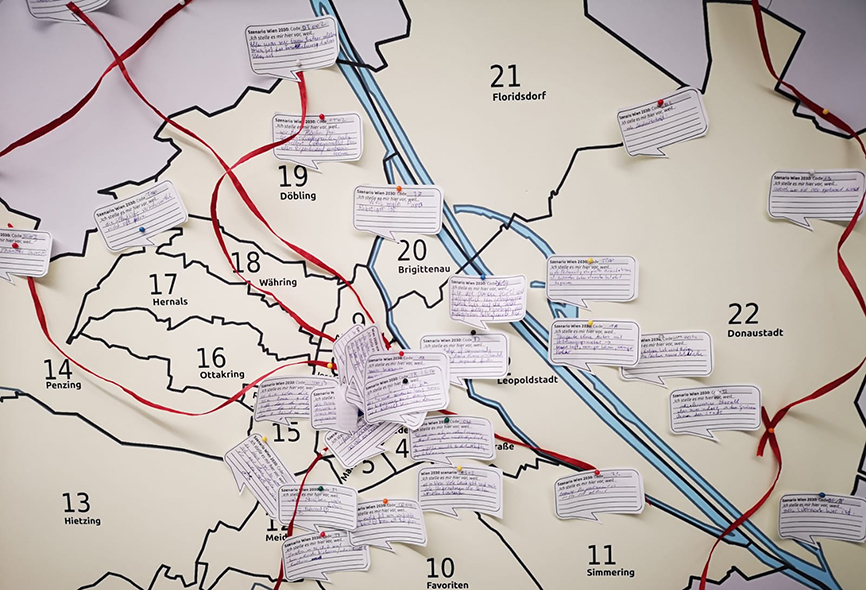 Ars Electronica Research Institute knowledge for humanity hub (k4h+) in collaboration with exploration space (at) ACDH (at) the Austrian Academy of Sciences, Social City Vienna and Knowledge City Vienna invited to participate in an experiment at the Vienna edition of the European Researchers Night 2019. We offered the opportunity to test with us the first edition of a series of co-creation tools we are currently developing in the framework of the project of exploreAT!, focused around the need to connect the United Nations’ 17 Sustainable Development Goals (SDGs) with perceptions about digital futures. For this we prepared a three steps interaction around questions of sustainability and prospective visions for 2030 in the context of a socially inclusive city of Vienna, with a participative methodology between a qualitative and quantitative approach. Taking the opportunity to be among many other research groups and projects communicating science to visitors, the setting of our stand displayed different levels of information and visualizations about the SDGs accomplishment, as well as the great approach of the Good Life Goals, which consists in 17 emojis and basic indications for taking the SDGs into our everyday life at the individual level.

In order to visualize people’s interests and priorities regarding the SDGs, participants approaching our stand were first invited to show they support for the three more important and urgent goals for them, by “voting” on a visual canvas with basic information on each SDG. Through a dotmocracy process, this generated an easy visualization in progress that attracted and invited other participants to do the same, in some occasions discussing among them or other people which ones to prioritize. As a second, more elaborated step, we asked each of them to briefly imagine and write a future scenario in 2030 in which a specific digital technology or trend (robots, smart mobility, artificial intelligence, online gaming, etc) could develop in some way that it contributes to one of the selected SDG. Once described, they had to place that scenario card on a second circular canvas, which according to its position will consider as principal allies either the Academia and universities, or instead the government and policymakers, or actors in the industry and commerce. Following this way the framework of the Quadruple helix of social innovation, this perspective from citizens allows us to better understand their expectations in relation to possible futures, as well as levels of feasibility regarding possible alliances. Finally, as the third part of the interaction, we asked to connect that scenario to a given district or area of the city of Vienna, in order to reflect by “analog geolocation” where and why such possible future could have a starting point from their perspective.

Taken as preliminary results, and some sort of validation of our approach for keep on developing the described materials and methods, here we share some numbers of this first interaction. An important outcome is that 53% of the 76 participants took part in the second step of the exercise and 46% went through all three steps. These figures give us the positive impression that our approach was suitable to a setting like the ERN2019 (with participants spending little time at the single stands), although some participants faced some effort in our interaction. Furthermore, the used tools showed their potential to generate interesting results – especially if taking into concern the little control we had on the participants or the way they choose to participate in our interaction. Participants were obviously concerned by the negative effects of climate change and especially choose to focus their attention on this issue. Both in the first and in the second step of the interaction, participants chose the Sustainable Development Goal linked to “Take urgent action to combat climate change and its impact” (SDG 13) significantly above average, followed by “Ensure availability and sustainable management of water” (SDG 6) and “Ensure inclusive and equitable quality education” (SDG 4). Due to the current climate movement, the focus on climate action scenarios seems to be a valid result, which shows that the tool works well with the 17 SDGs to make a mood in a group of people visible. In doing so, we can also suggest that the participants placed particular emphasis on political actors (50%) for the implementation of their scenarios, although at the same time they were relatively sceptical about the likelihood of implementation regarding this group of actors.

Recombining previous work under copyleft licenses from the SDGs and GLGs open repositories, as well as design sources like TheNounProject or Sharing Cities Action, the first version of the mentioned materials we are developing can be accessed here for viewing and download. The results will be referred at the Poznan City Development Forum.

In case you are interested in the development of the project or similar approaches we are delighted if you connect with us.