Networked archives and a glimpse into the future 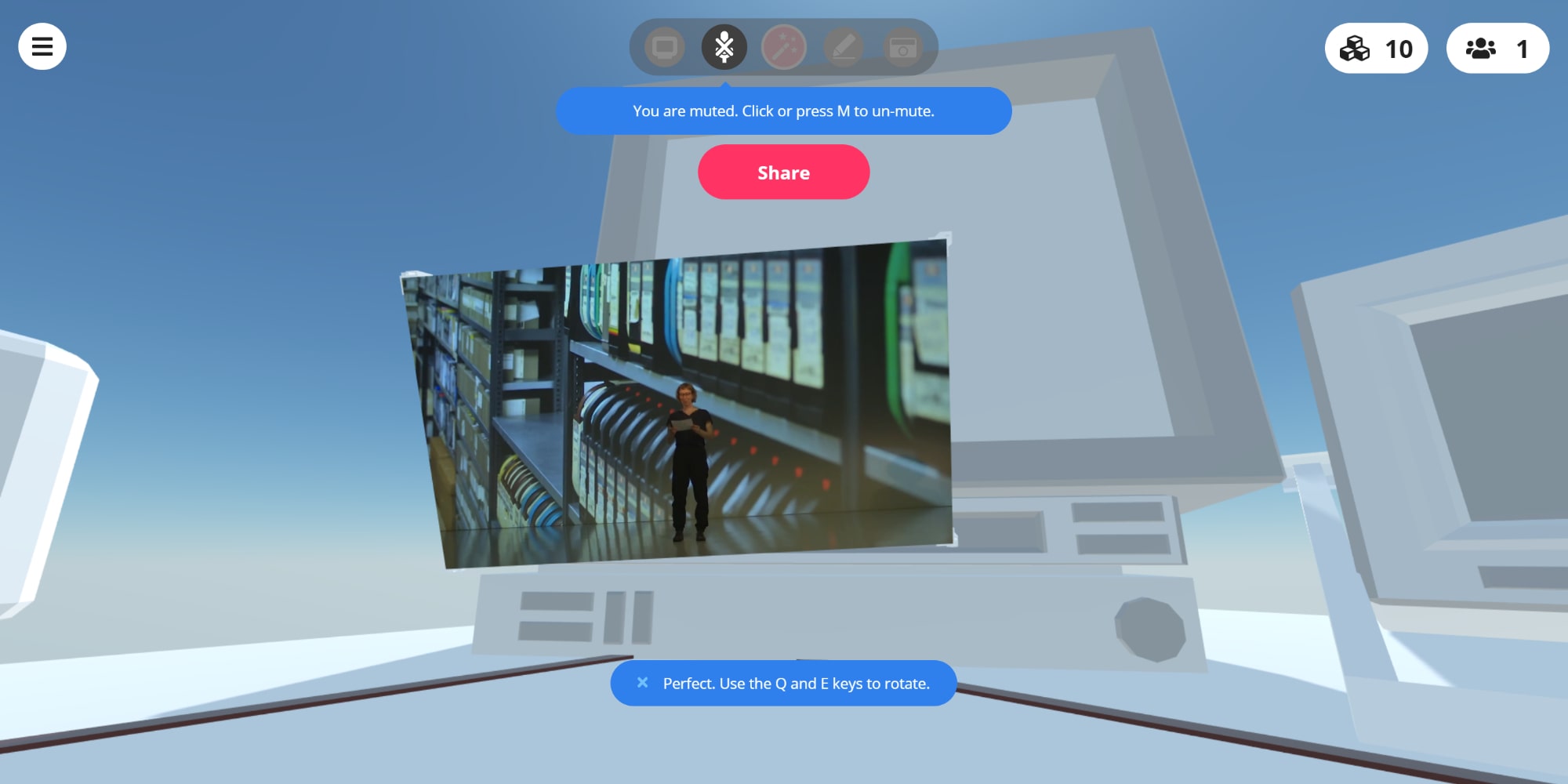 It was a turbulent year for the Ars Electronica Archive, both positively and negatively. A hacker attack threatened to do great damage to the enormous online inventory. Now it’s back, and both online and offline, intensive work is underway on new projects and ideas. At the same time, the skyrocketing volume of online content presented archiving with new tasks. Collaboration with important partners was also intensified last year. As part of a project funded by the Federal Ministry of Arts, Culture, Civil Service and Sport, a special conference was held at the Online Festival in cooperation with the same partners, where two panels dealt in detail with the archiving of the future.

How can data sets be kept accessible and at the same time secure? How can a physical archive receive virtual visitors? And what is the benefit for artists to deal with the archiving of their works? Christina Radner, who is responsible for the archive, told us in an interview about the challenges of the past year, but also about the new plans to be implemented this year.

Please tell us a little bit about what happened in the past year in relation to the archive.

Christina Radner: 2020 was a very exciting year for the archive. In addition to things that affected others as well, like the COVID-related home office, there was also a hacker attack on Ars Electronica that had a strong impact on the archive, on the database and the online archive.

In addition, there were more exchanges and collaborations with partners in 2020, which we were very pleased about. And this resulted, among other things, in a small contribution to this year’s Ars Electronica Festival.

In general, what were your most important insights from this particular year?

Christina Radner: The importance and necessity of continuously filling the online archive has been confirmed again. Accessibility must remain. At the same time, this year has shown how vulnerable the whole system is and how quickly it can happen that this accessibility no longer exists, even if something is online. I was initially surprised that it took a while before the online archive could go back online. But the break was necessary for security reasons, because many processes happened in the background and new things had to be established. But now we are back stronger than ever!

The archive was prominently represented at the festival this year, there was a separate conference on the topic of “Networked Archives”. Can you tell us a bit about what it was about and then what the outcome of it was?

Christina Radner: The conference came about as a result of the archive’s increased collaboration with various partners, which in turn was made possible by a project funded by the Austrian Federal Ministry. Our approach was that we wanted to talk to people from as many different fields as possible in relation to archival issues and talk about the challenges and questions that currently exist in this field. Part of the project took place within the framework of the Ars Electronica Festival, namely two panels – a conference and an individual lecture. In addition, there was a dedicated space for the archive in Mozilla Hubs.

The second part was a participation in the “Summit on Media Art Archiving”. But first to the points at the festival: This was very very exciting, on the one hand there was the “Networked Archives” panel with the speakers Oliver Grau (DE), Dagmar Schink (AT), Christiane Paul (DE/US), Mariano Sardón (AR), Rafael Lozano-Hemmer (MX/CA) under the moderation of Manuela Naveau (AT). Here I can highly recommend especially the second half of the panel, when a discussion arose based on questions we prepared.

As the name of the panel says, it was about networking, but also about accessibility and the value of archives in general. For an artist, an archive and being represented in an archive has a completely different value. What role do museums have, what role do universities have for archives and vice versa, to what extent does economic efficiency play a role? Such questions were dealt with.

The second part was a single lecture by Rafael Lozano-Hemmer, called “Best Practices for the Conservation of Media Art from an Artist’s Perspective”. This is an example where an artist is very much taking care of the archiving of his works himself, is dealing with it and has made a kind of “business” out of it. He has employees and can therefore help the gallery owner who exhibits his works, because he provides a kind of handbook on how to deal with his works. Very exciting!

That it is the task of the artist to take care of the archiving of his or her works, however, is not everyone’s view, as we saw in the panel. The other side says that it should not be the artist’s task to take care of the archiving of his or her own works, but that it is actually the task of others, museums, archives, universities, to take care of it. Both sides have good arguments, here the opinions diverged. But everybody agreed again when it came to the question of the importance that media art has to be preserved. So no matter who does it, but the knowledge must be preserved. Example: Net art, after all, only takes place online. You can see that on older websites content that is only available online is no longer accessible after a certain time because individual components such as the Flash Player no longer work. So one question was: Who takes care of the websites and the preservation of Net Art?

The last activity at the festival was the Mozilla Hub room specifically for the archive, which I mentioned earlier. That was quite exciting because it was something completely new. Specifically, in the limited time we had, we implemented a virtual space where the architecture was based on an archive. You could see old printers, floppy disks and shelves. Then, in this setting, one could listen to or watch three contents in the form of lectures.

A next idea would be to recreate the Ars Electronica Archive in its entirety in a virtual space like Mozilla Hubs. In addition to the online archive, we also have a large physical archive. It would be exciting to recreate that to get a feel for the space, what it looks like and what artifacts are in it. Especially because our archive is not really open to the public: That’s how you could make it accessible. 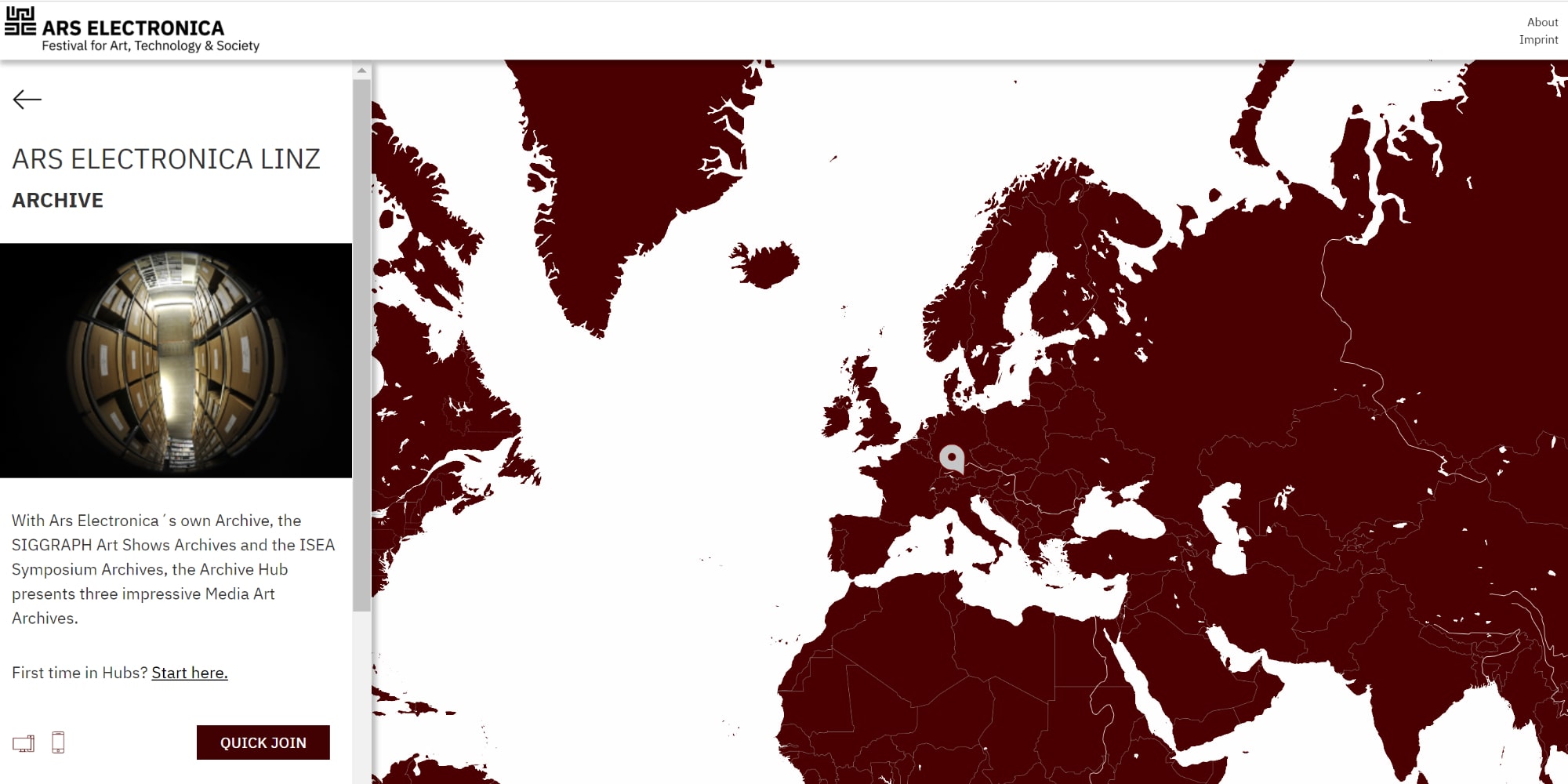 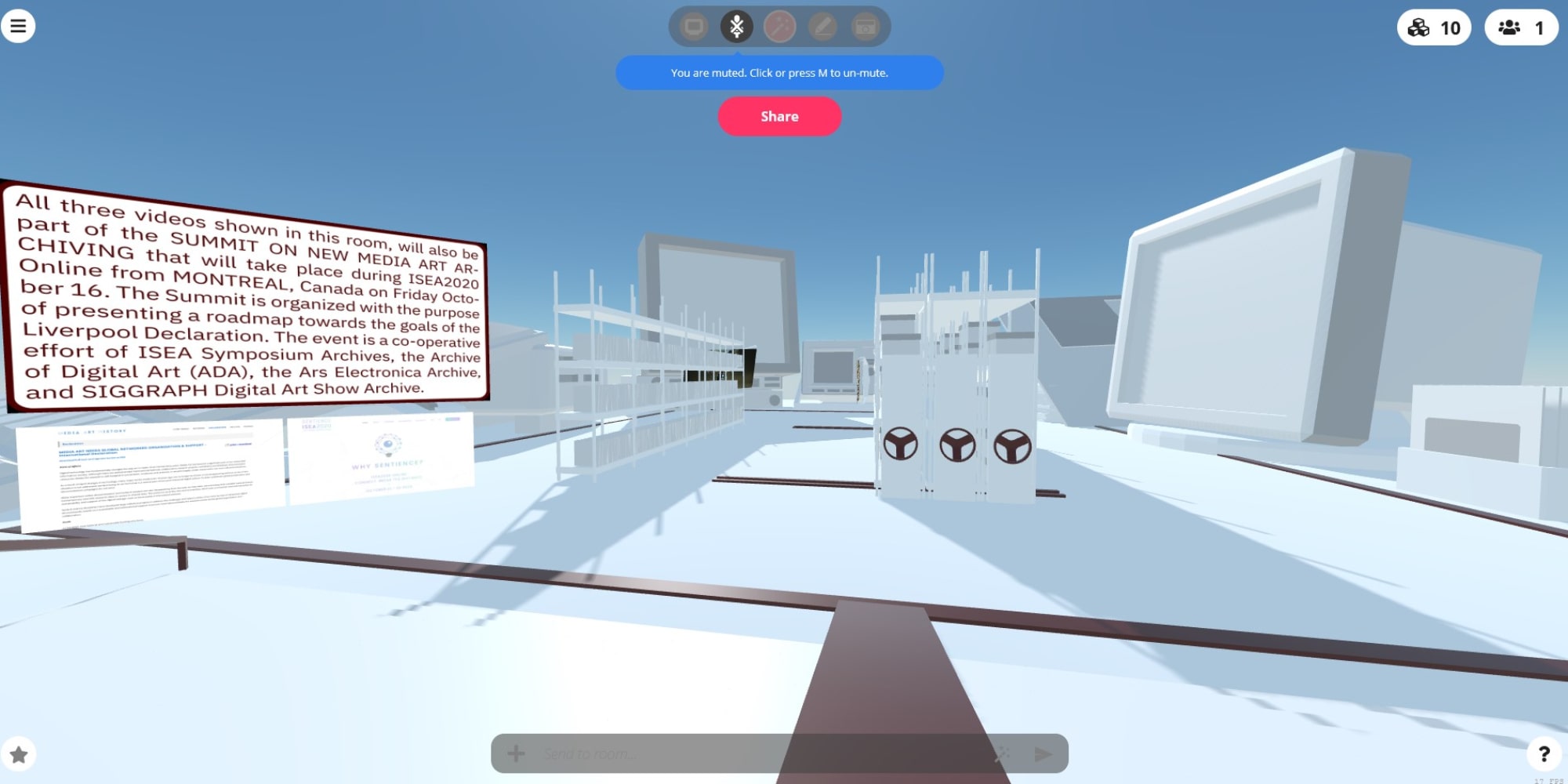 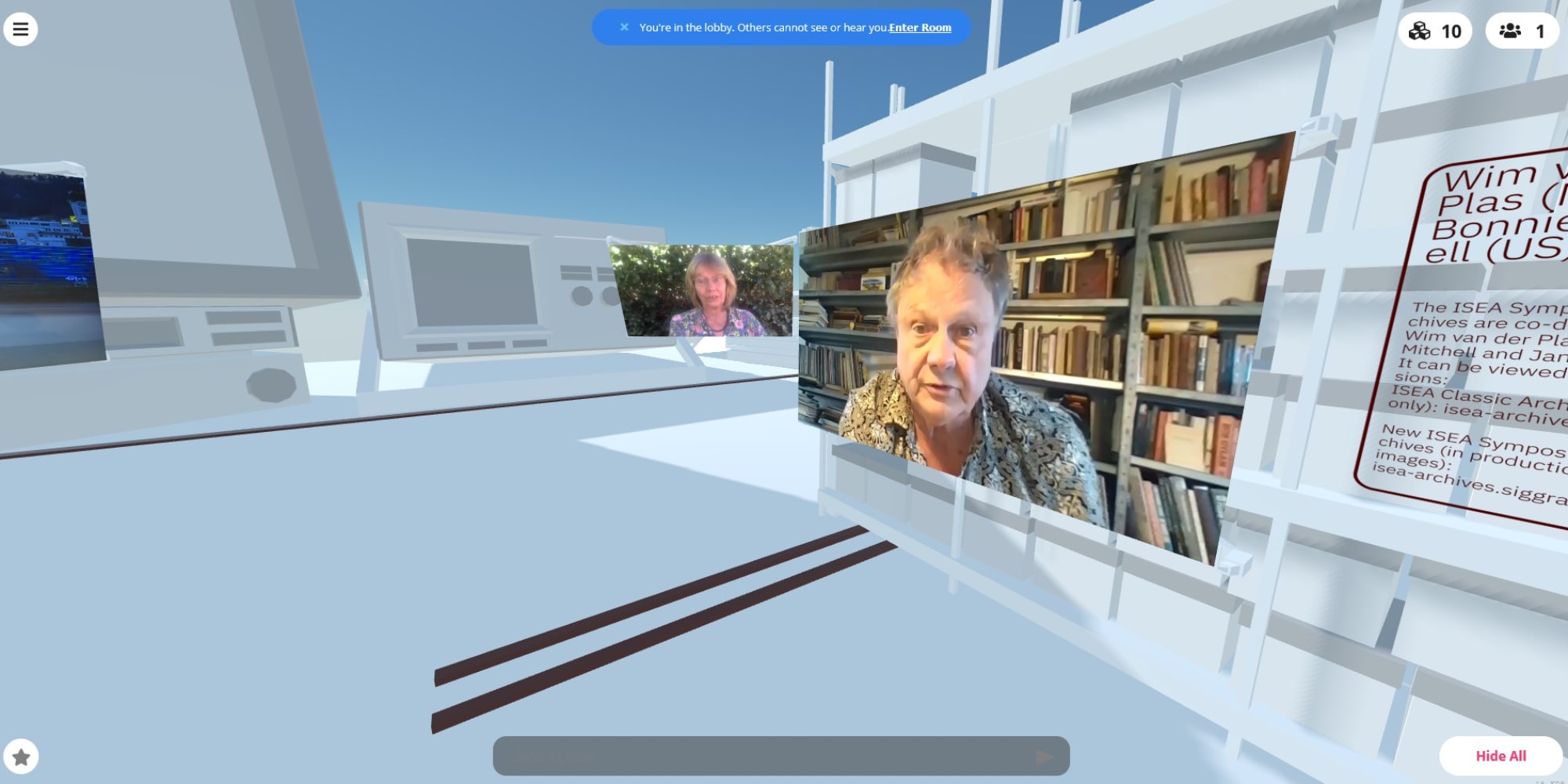 In addition to the activities at the festival, there was a closer collaboration with some partners, these were Oliver Grau and Wendy Coones from the Department of Image Science at Danube University Krems, Wim Van der Plas (NL), ISEA Symposium Archives and Bonnie Mitchell (US), SIGGRAPH Digital Art Show Archive. In this group, there were several meetings with the aim of coordinating the conception of the Summit on New Media Art Archiving, which took place in the framework of ISEA 2020. The Summit then took place online on October 16, originally it would have been scheduled in Canada. Working groups at the Summit showed how much interest there is in mutual exchange among each other, both among the better-known names that are already well networked, but especially from smaller archives. They need more help when it comes to starting and building an archive. There, in addition to expertise, it’s also about uniform standards for archiving and certain rules that need to be followed. The knowledge is there, but it would have to be universally accessible and centered. In addition, everyone across the board is looking for funding and support. Joint efforts in this regard would help. That’s the direction it’s going: that people are joining forces more to benefit together.

What challenges do you think the future holds for the field of archives? Well future is such a broad term, let’s say, what does the coming year bring?

Christina Radner: A big challenge will definitely be this explosion of content available digitally. That’s actually something positive, because we want to have a lot of content, but it’s so, so much more content compared to the past, from Ars Electronica’s point of view.

Even before, there were big and many panels at the festival, but now the amount has increased at least by a factor of ten. Not just the conferences, all the events are now available digitally. That’s a big challenge in terms of resources and storage space, but also in terms of structuring. This is a topic that is becoming more and more present, and has perhaps been present in the archive sector for some time. But now it is becoming an issue for the website and the entire online area: How can I structure and organize content on a large scale? This is where synergies between the archive and other areas can arise. In any case, the big challenge regarding archiving and backup is the quantity. 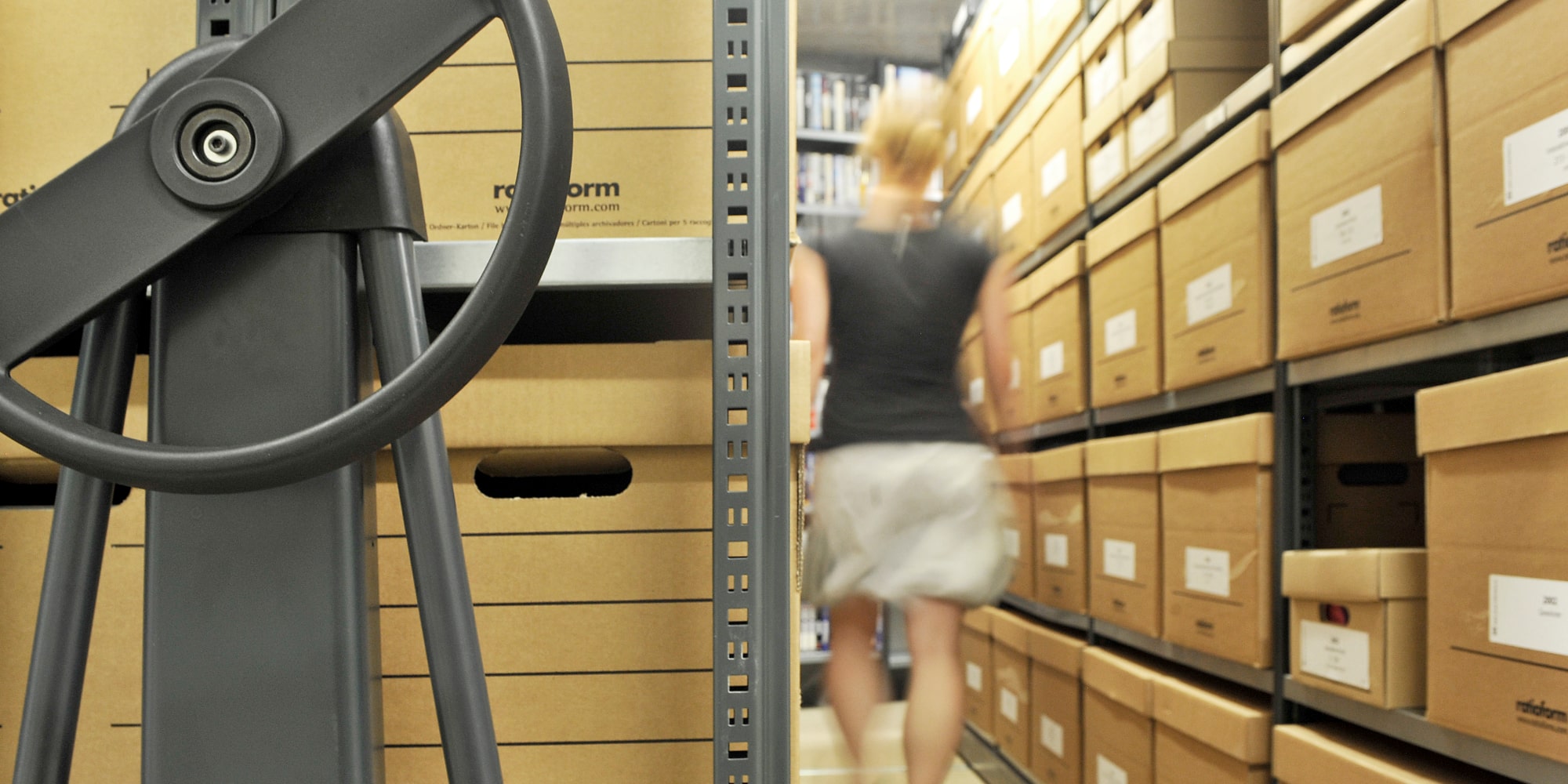 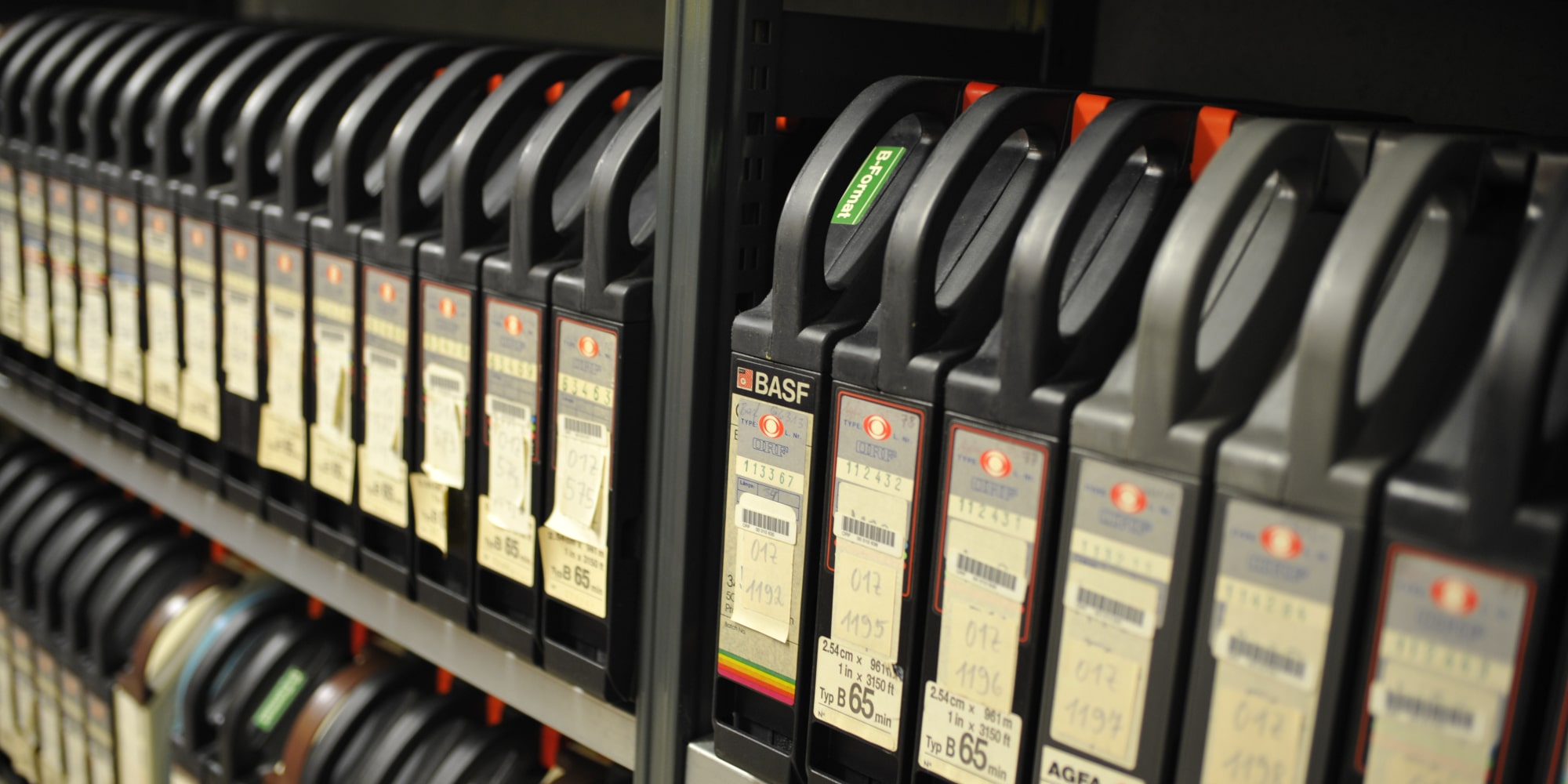 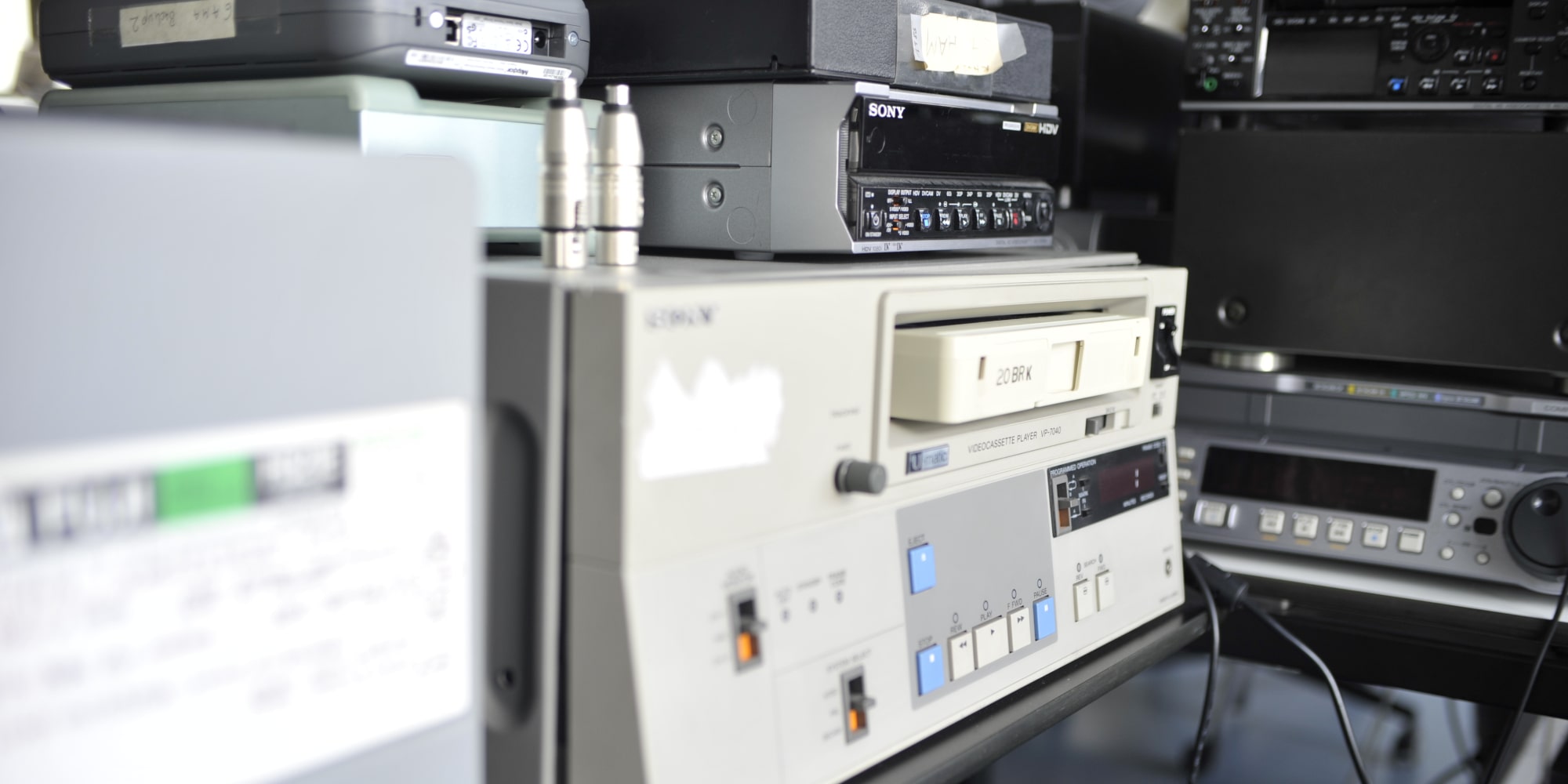 The second point, this is perhaps not necessarily a challenge, but something that I have noticed this year. That is the increased requests to the archive, the interest of scientists and artists to work with larger amounts of data. This was also mentioned at the panel at the festival, and it doesn’t just affect us, but other archives as well. The interest in examining data sets with the help of AI and semantic analyses. Some other archives already make data sets available for download on their website, so that artists and scientists can work with them. In the next year, we will have to see what would be possible for us, in which areas it would be possible and what could result from this for us. We have to ask ourselves such questions.

We also have another special anniversary coming up this year, but I can’t reveal anything about that yet. Only this much: At every anniversary, the archive naturally plays a major role…

Then we want to leave it that way and are excited to see what this year will bring for the archive. Thank you very much for the interview! 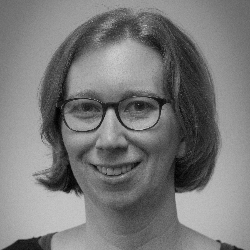 Christina Radner is the project manager responsible for the Ars Electronica Archive in Linz, Austria. In 2009, she completed her master’s degree in art history at the University of Vienna. During an internship at the Art Brut Museum Gugging in Klosterneuburg near Vienna, she got her first insight into the archival work of a museum. In 2013, she moved back to Upper Austria and began working with the Ars Electronica Archive Team. Since 2015, she has been the contact person for the archive and part of Ars Electronica’s Festival/Prix/Archive Core Team.

The project “Digital Art Histories” is a project funded by the Federal Ministry of Arts, Culture, Public Service and Sports. 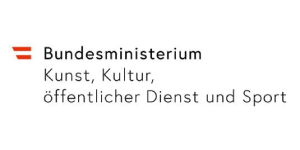