K’ARTS Garden: “Our work is fresh and fun” 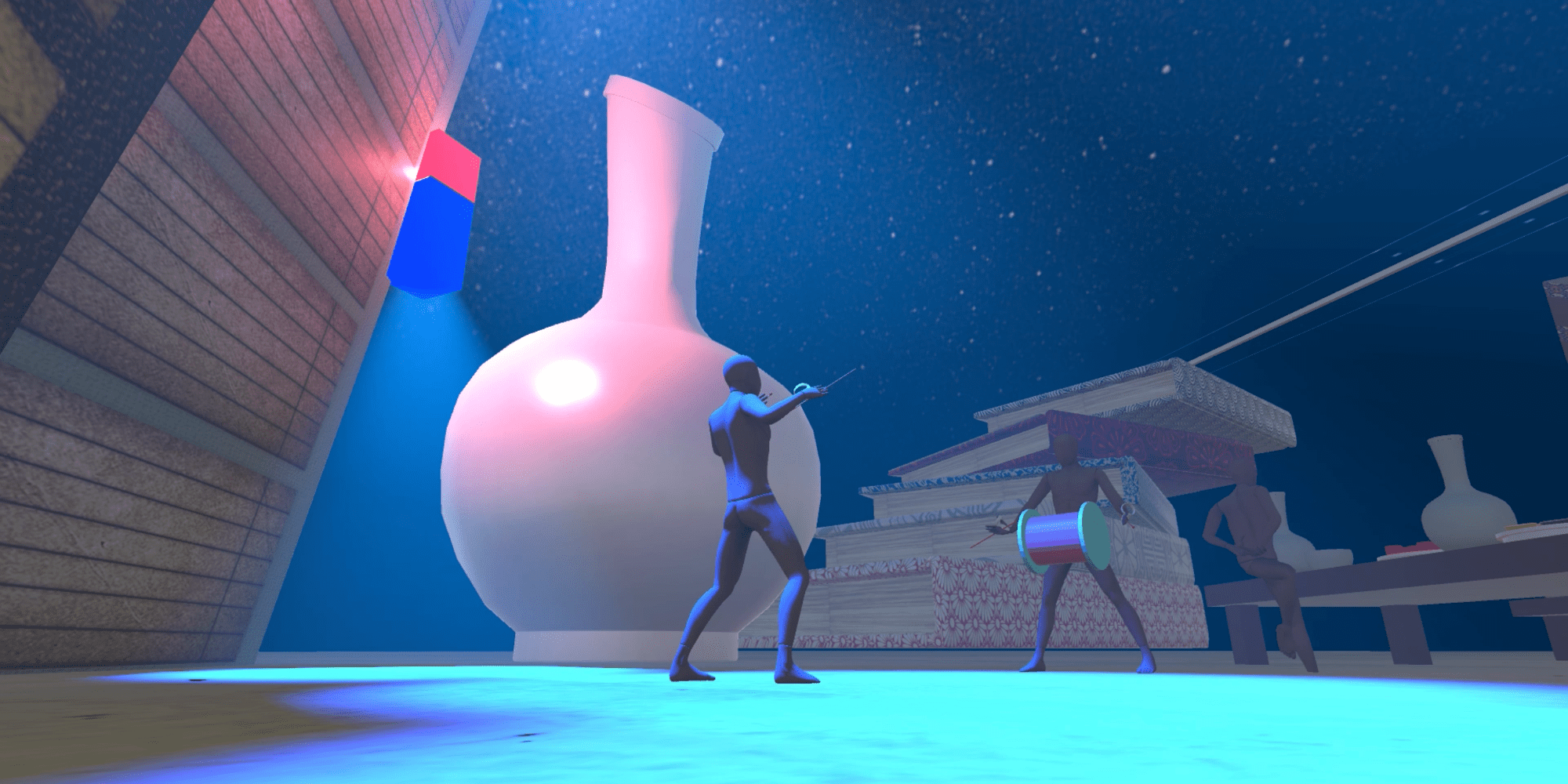 The K-ARTS “Ars Electronica Academy” support program, which consisted of mentoring sessions and inspirational lectures for emerging artists, was based on the existing curriculum of two classes, Interactive+ and Immersive Performance. It allowed students to work on their own artworks that will in the end be shown at the Ars Electronica Festival 2021 as part of the K-ARTS Garden.

In this post, however, we don’t want to get too much ahead of ourselves about the artworks. Instead, we’d like to give you a glimpse into the process of creating the projects, to show the development that took place among the students. For this purpose, we asked them what they found helpful about the talks and sessions, and to what extent the feedback influenced their works. In the end, it was clear that not only the students learned something; it was also an exciting process for the Ars Electronica team

This Interactive+ Humor for the Future Community Class is an artistic reinterpretation of Korean mask-dance and drama, Tal-chum, which has led to common solidarity and empathy in humor and satire in the past community. The participant will create interactive and virtual arthouse games to experiment with new ways of communicating in the future society. The teaching faculty are LoopnTale, Game Design Duo and Insoo Park, Professor of Korean Traditional Arts, K-Arts. The Ars Electronica Experts for this course are Seiichi Saito (Artist), Jeremiah Diephuis (Artist and Mentor), Martin Honzik (CCO and Managing Director Ars Electronica Festival), Christl Baur (Head of Ars Electronica Festival) and Laura Welzenbach (Head of Ars Electronica Export).

“No-normal in wonderland’ is about an individual’s independent identity. Instead of setting the direction of people’s lives on their own, we will critically illustrate how players follow the standards set by others in this game. The standards of normality imposed by society make it difficult for individuals to make their own decisions because we live under the pressure of breaking away from the group when we make self-reliant choices different from the majority of standards. Nevertheless, we would like to convey that autonomous choice is vital in maintaining diversity in society. We designed the game with a one-way play to convey our message.” 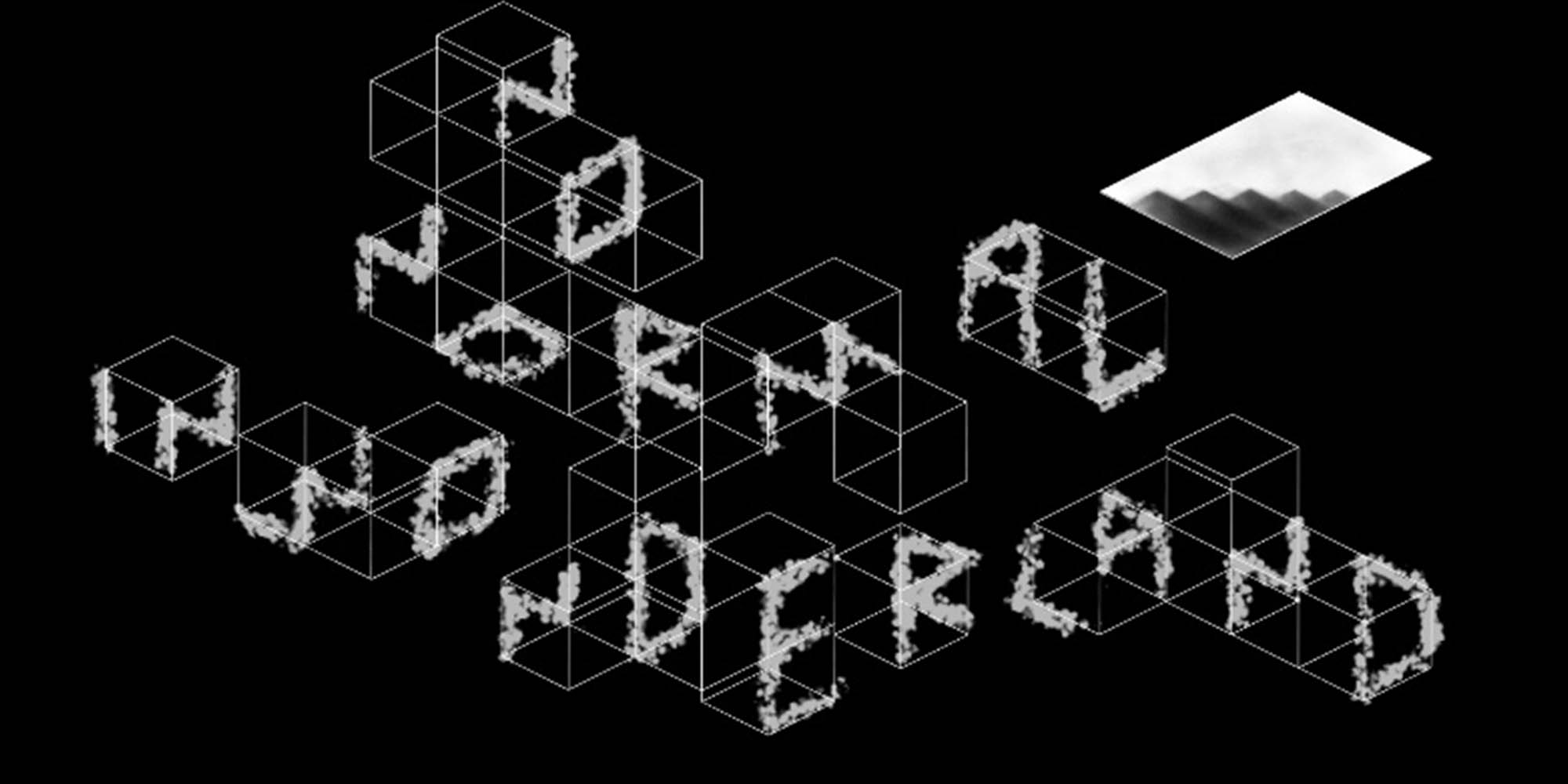 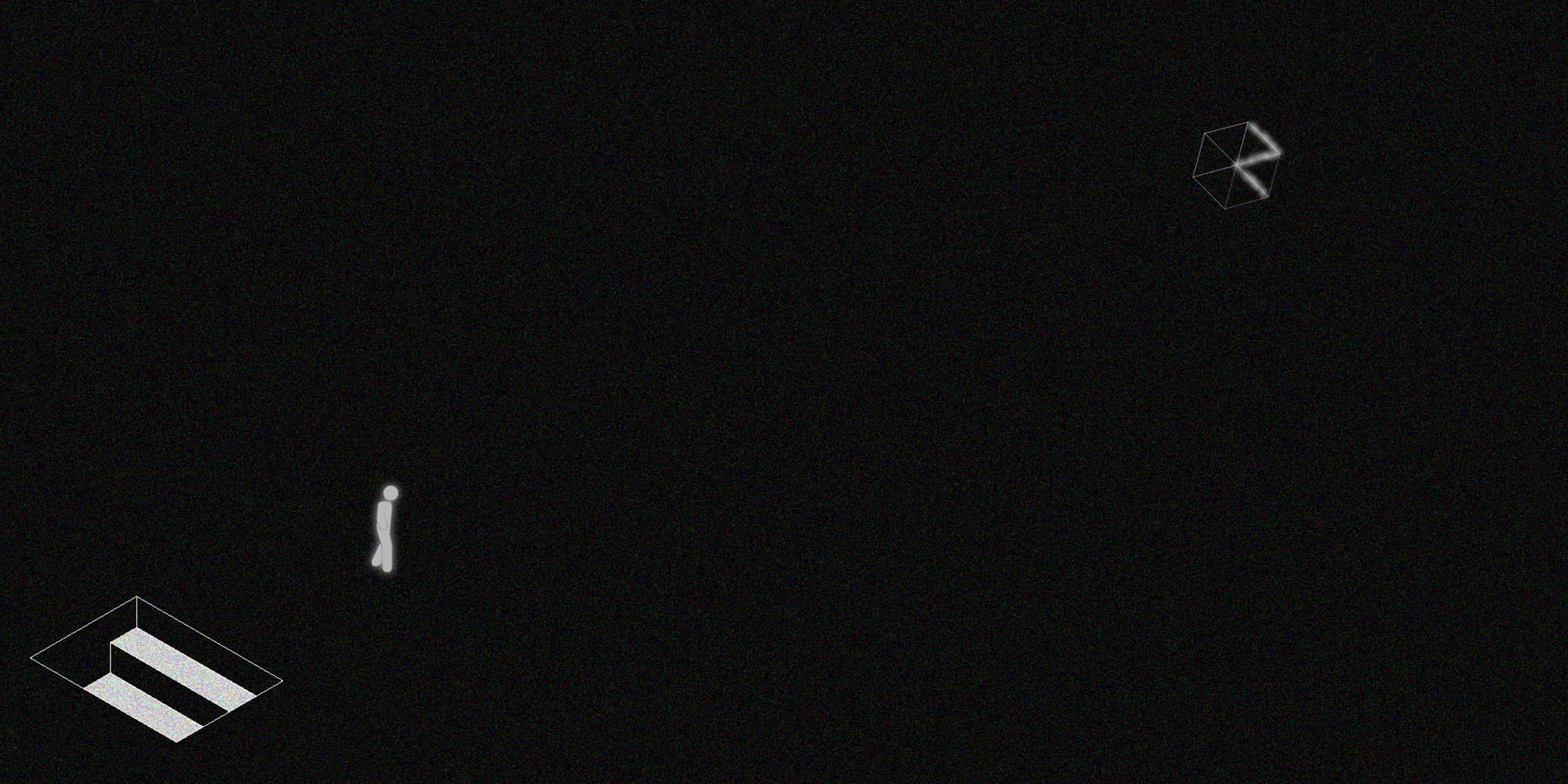 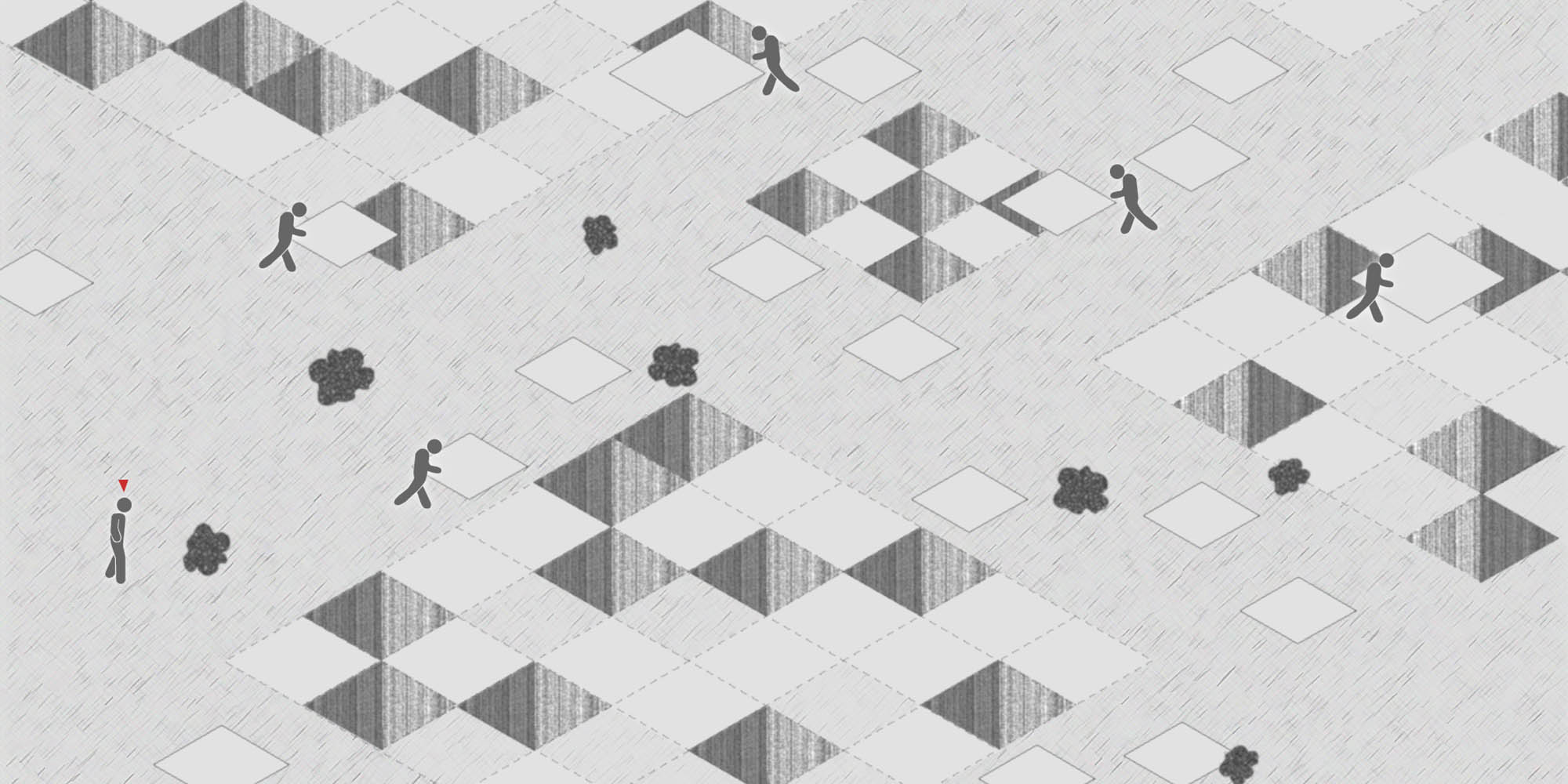 “The player will move his character along with other characters without hesitation. In the beginning and middle of the game, you get positive feedback when you follow other characters than the player’s own choice. But when you get into the second half of the game, the pattern of play changes. We wanted to expose our critical views at that point.”

For the group, especially the reference material that was presented by the mentors was very helpful in developing their work.

“I would like to thank the mentors for their passionate feedback for the project and for showing the projects they are working on so that students can get inspiration.”

We have started our work based on the fact that the physical balancing movement ‘Kkaekkichum’ in Korean mask dancing (Talchum) has deep similarity with each individual’s internal harmonizing activities. The core content of our project is to emphasize the balance and systematic relationships in the human community by exploiting the similarities between the way of maintaining equilibrium such as the successive individual choices in the game and physical balancing of the body.

The most important insight the group gained was that it is important to consider the type of exhibition or platform from the beginning – because an online exhibition requires a different approach than a physical exhibition. 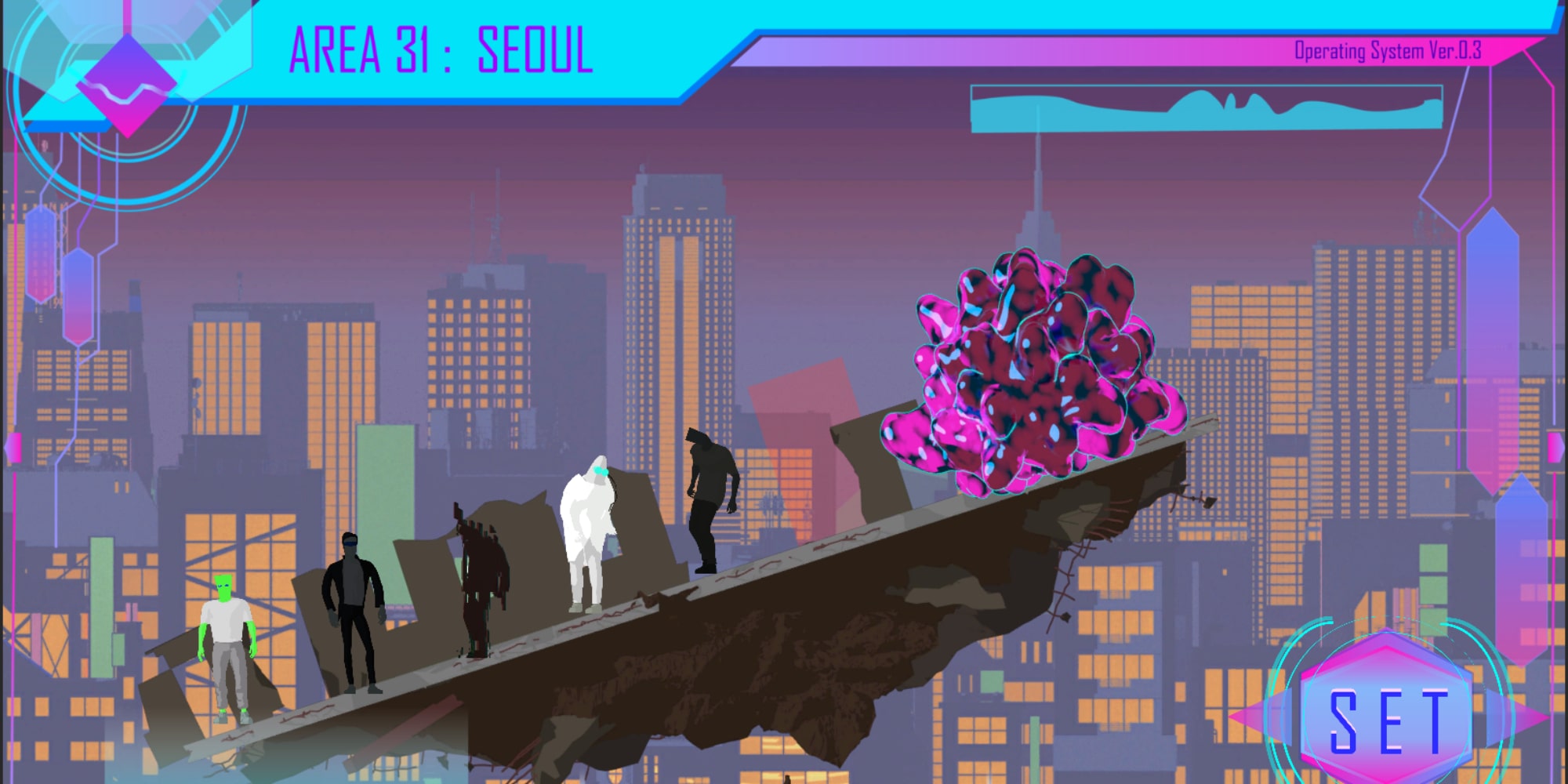 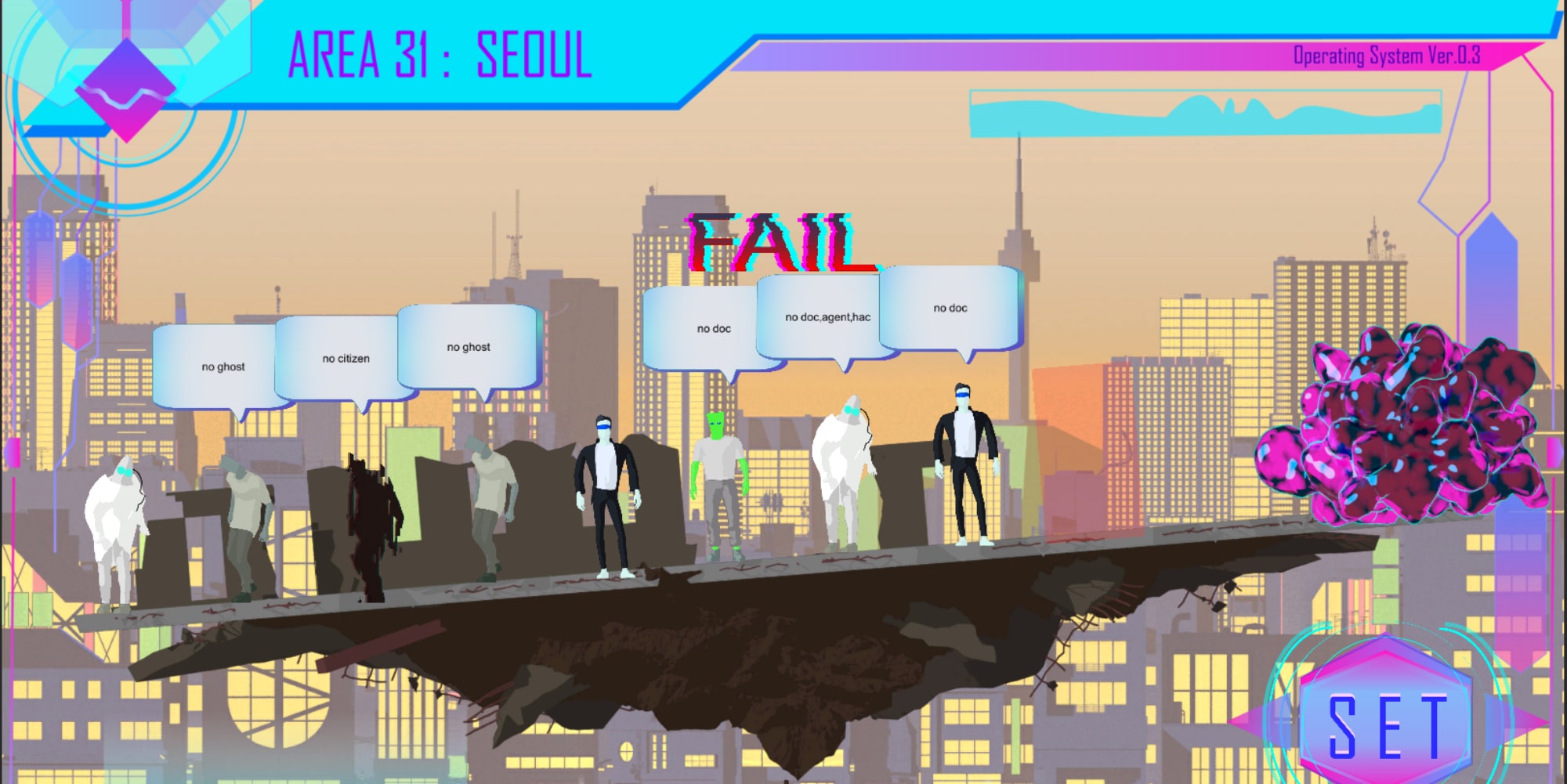 “In <WWD : Divers>, the player is placed in the system as the algorithm in the online platform that leads us to Anti-intellectualism. The more diversity is preserved, the more energy is consumed, and the more rhythm notes are matched, the more the play is continued. As they cope with and adapt to the system, the player will gradually find that the way to eliminate diversity is to win, and will sense that they were the subjects of the extermination after the game.”

Also references were an important point and very useful for this group.

“When we’re concerned and hesitating we have to make decisions, they said ‘You have to believe in your decisions, think about what you like, and at the same time don’t forget that this is a game.’ It was encouraging and helpful.“ 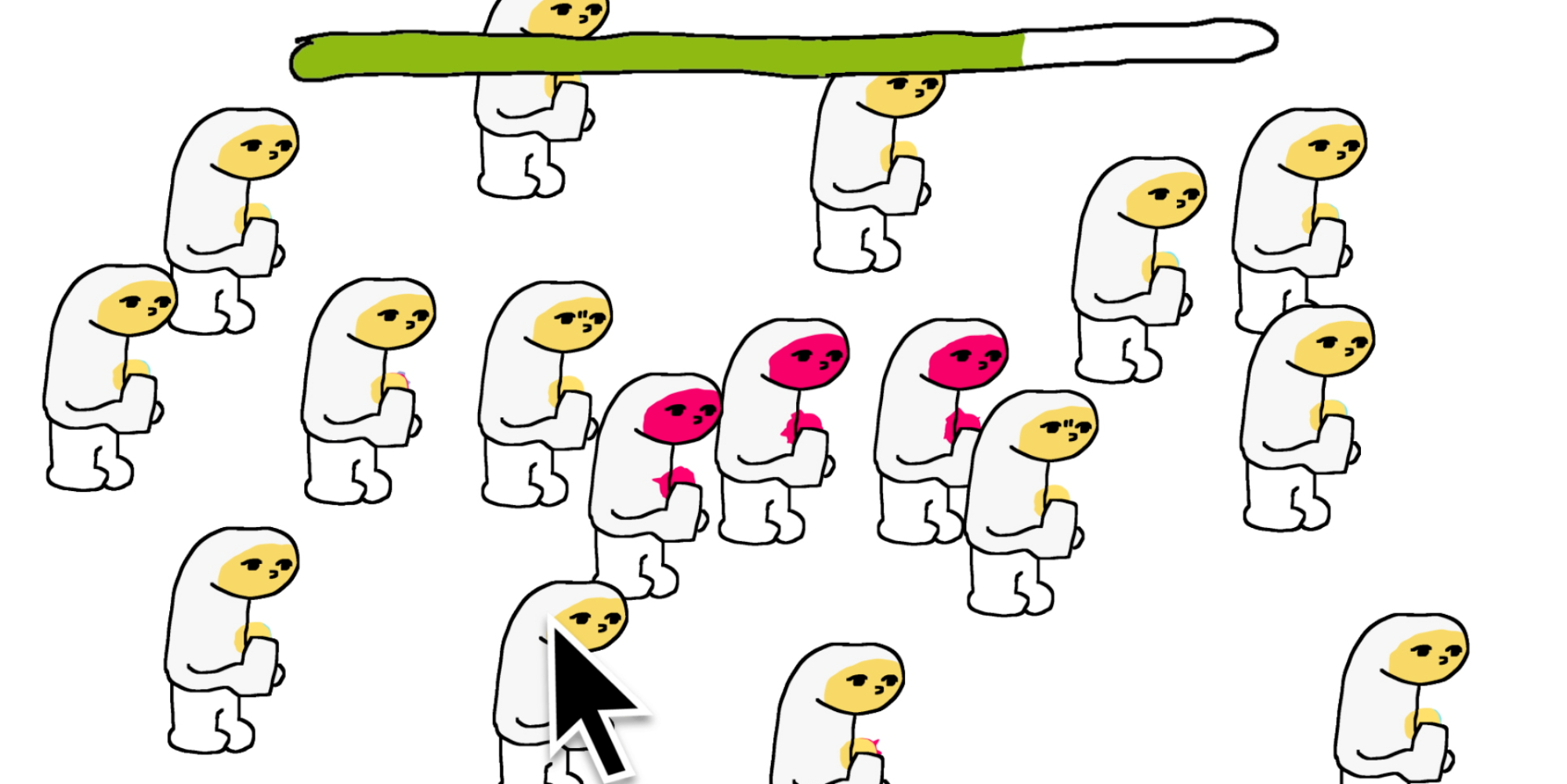 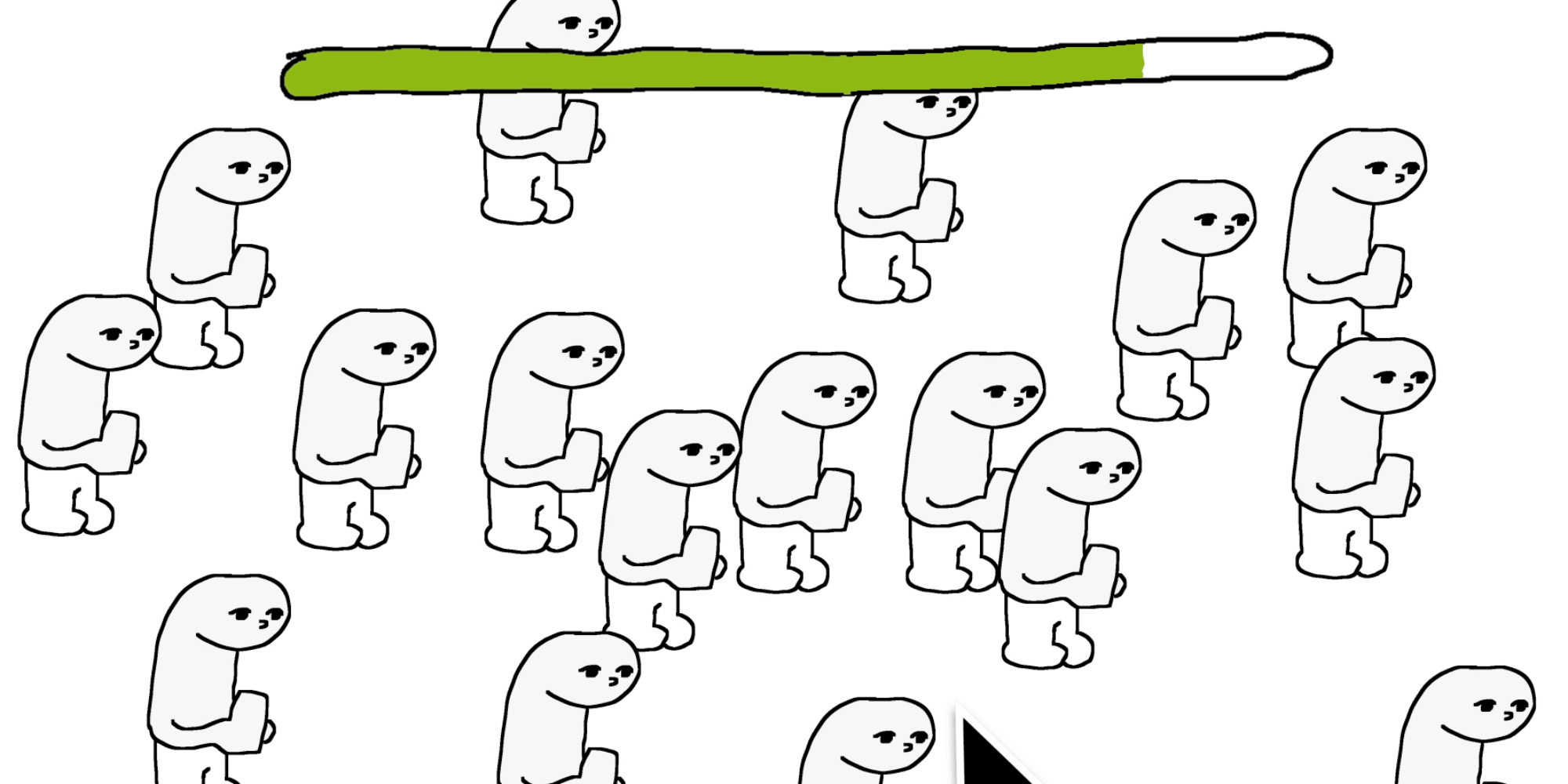 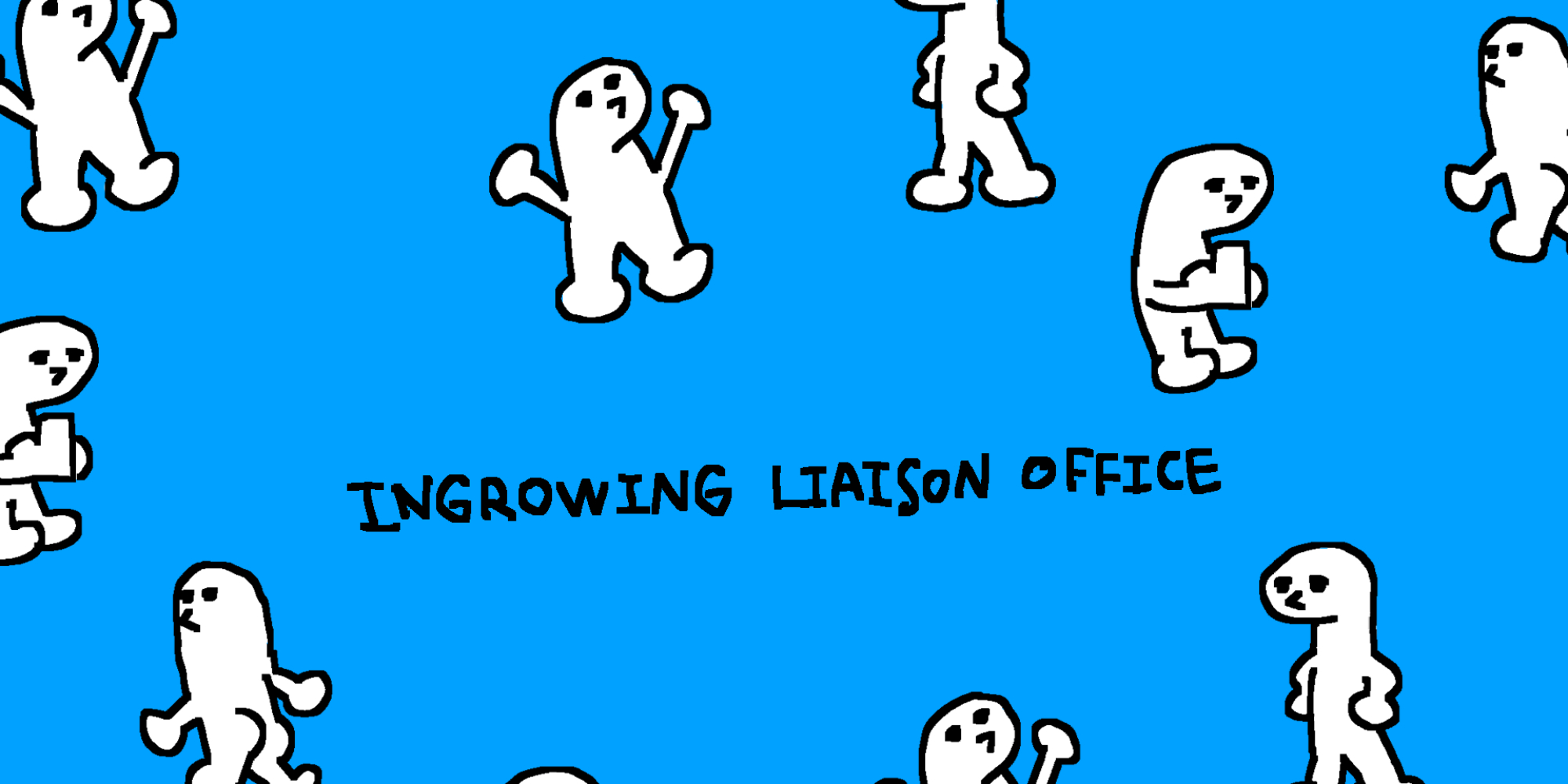 “The story is about Coni, who connects stars and makes constellations. Then he has been enlisted as a fighter plane pilot, and had to kill others to survive. After the war ends, he has been granted as Ace pilot. But he refuses the medal and take off to meet stars and constellations again. However there were no stars but only his panic.“

„The comment about the ‘Usage of scent’ was helpful.”

And again – references were of big help for this team as well.

“We focused on the gap between VR space and reality. Ten minutes of performance is a fleeting time for a real banana. But in that short period of time, the bananas in VR ripen. Because of the process, the audience can feel the difference in time between virtual reality and reality. At the same time, the space on VR further amplifies the gap with reality as it is distorted from a formal space to an unstructured space. We made a kind of documentary performance by applying the participant’s own story . Therefore, the narrative of the performance changes every time.“ 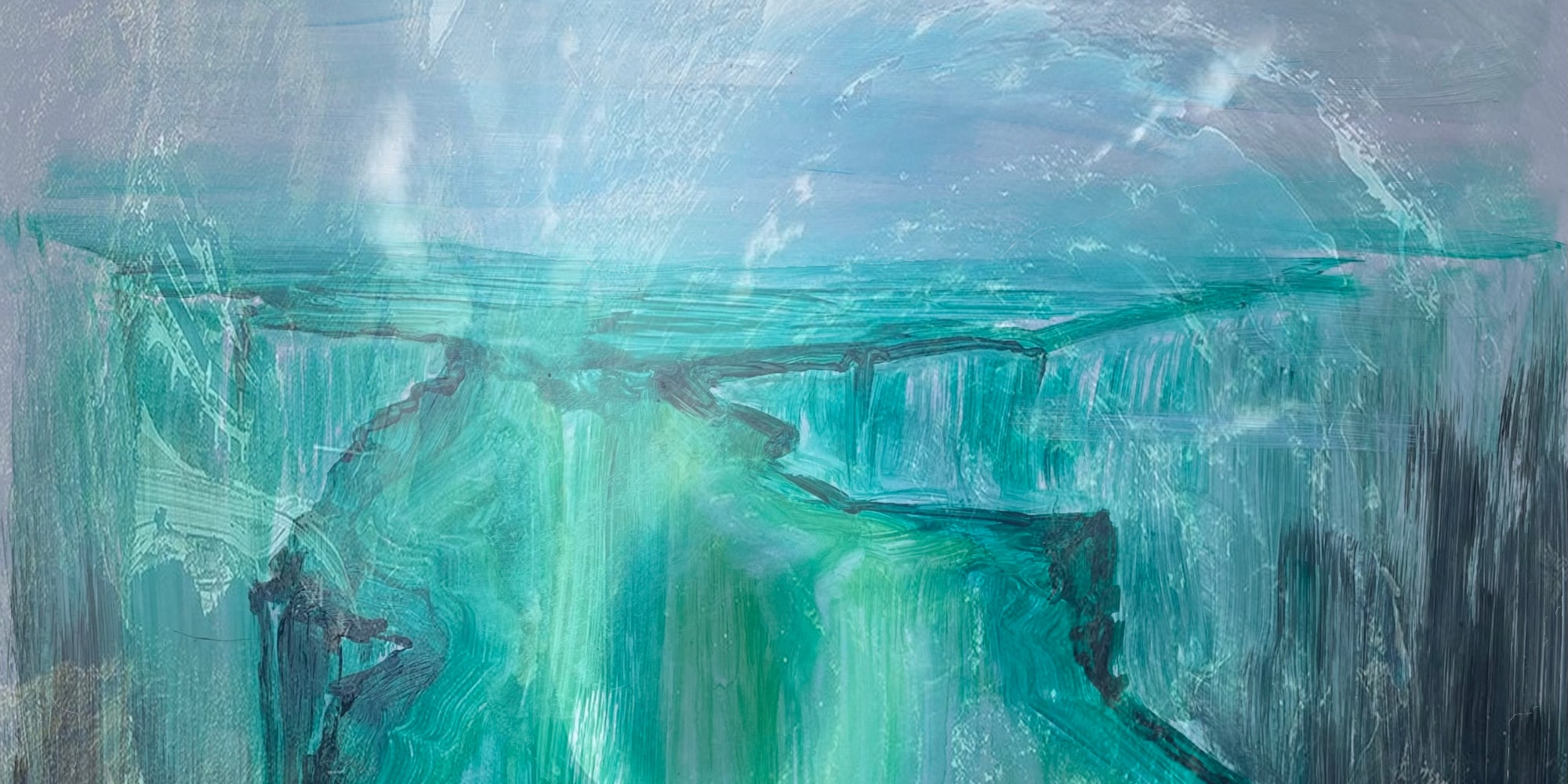 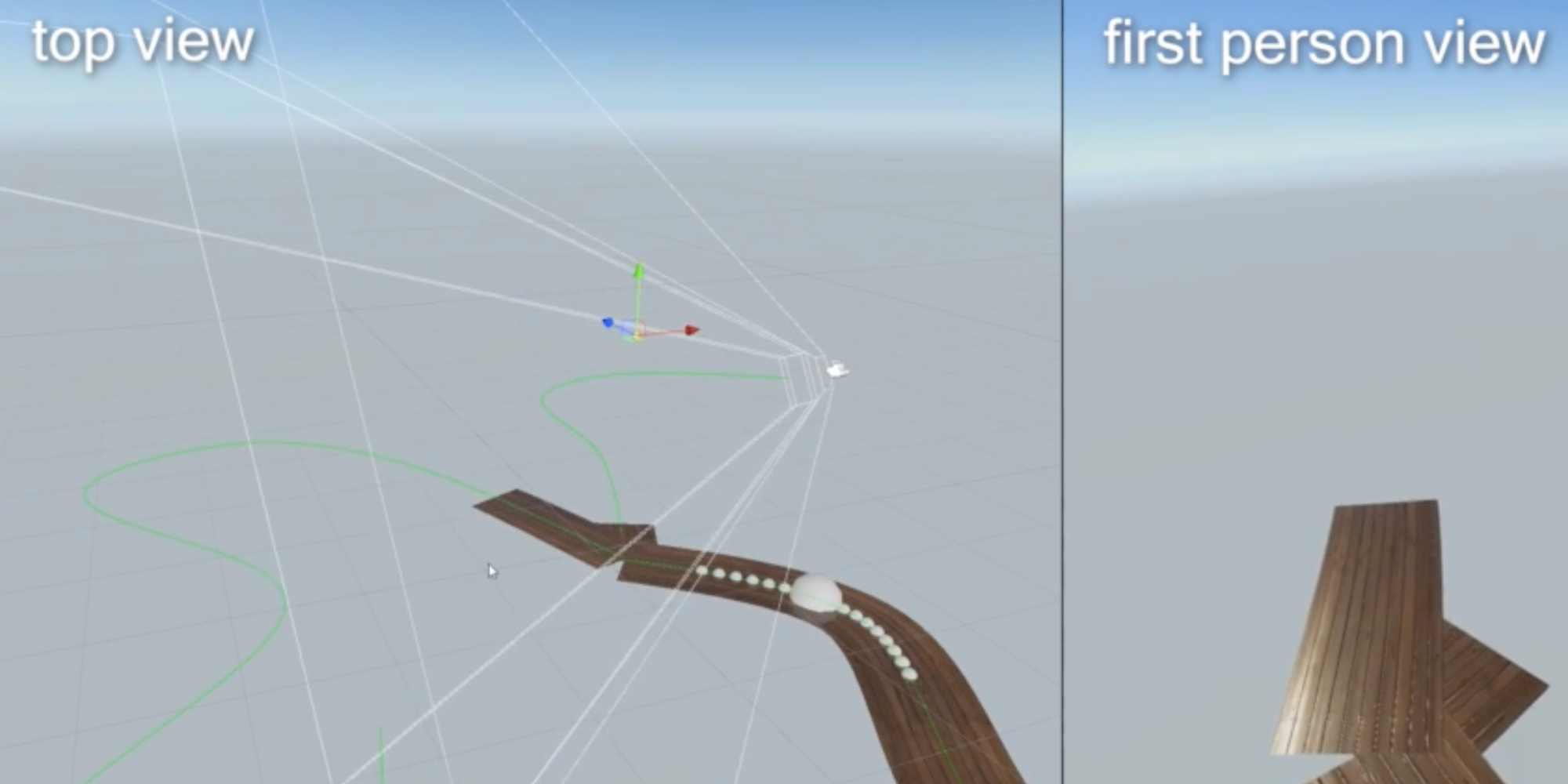 “You guys always said our work is fresh and fun. We are delighted by that warm encouragement.”

Inter-cumulation / Depth of the shadow

“Our project is about ‘relation’. Relation between any two subjects, but especially about how two strangers meet and cooperate together. We will show this with the orients of the two spaces and the light – shadow relation.”

“Every feedback was very helpful! It all made us think more how to use technology into our work and how to develop works that involve technology.”

“It was really awesome to hear feedback from global artists! We are so honored and it really opened our eyes towards this immersive performance area.”

“We have lost space to dance and music due to COVID-19. We wanted to recreate that moment in virtual space. In the meantime, art has been centered on the West, but we wanted to create a music and space of the East, especially Korean. We want people to have a good time in this space. “

On and Off / Landing [by accident]

“Our artistic project Landing [by accident]; is about diaspora. Diaspora means unavoidable immigration. In the Japanese colonial era, my grandfather smuggled himself into Japan from Korea, and he became 1st generation of Korean-Japanese. Also, in 21century, the continuing refugee issue and diaspora made me make this performance. There would be refugees floating on the sea, a dolphin who put refugees in danger, and the ASHORE as the destination.
The audience will be a refugee who has no choice but to move. They will float on the sea and, through dangers, arrive ashore.
Dangerous sailing and an uneasy afterlife will wait for them. 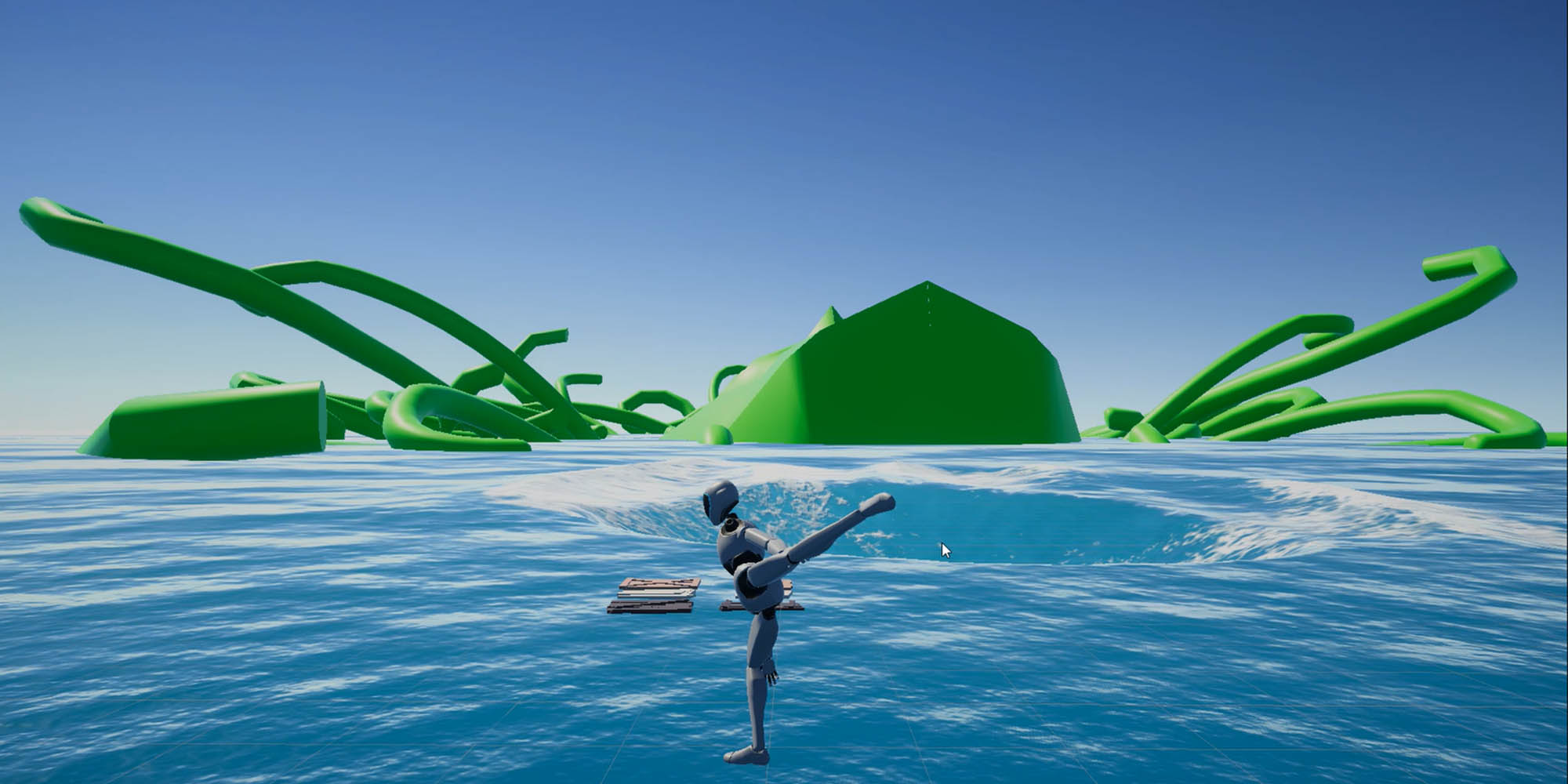 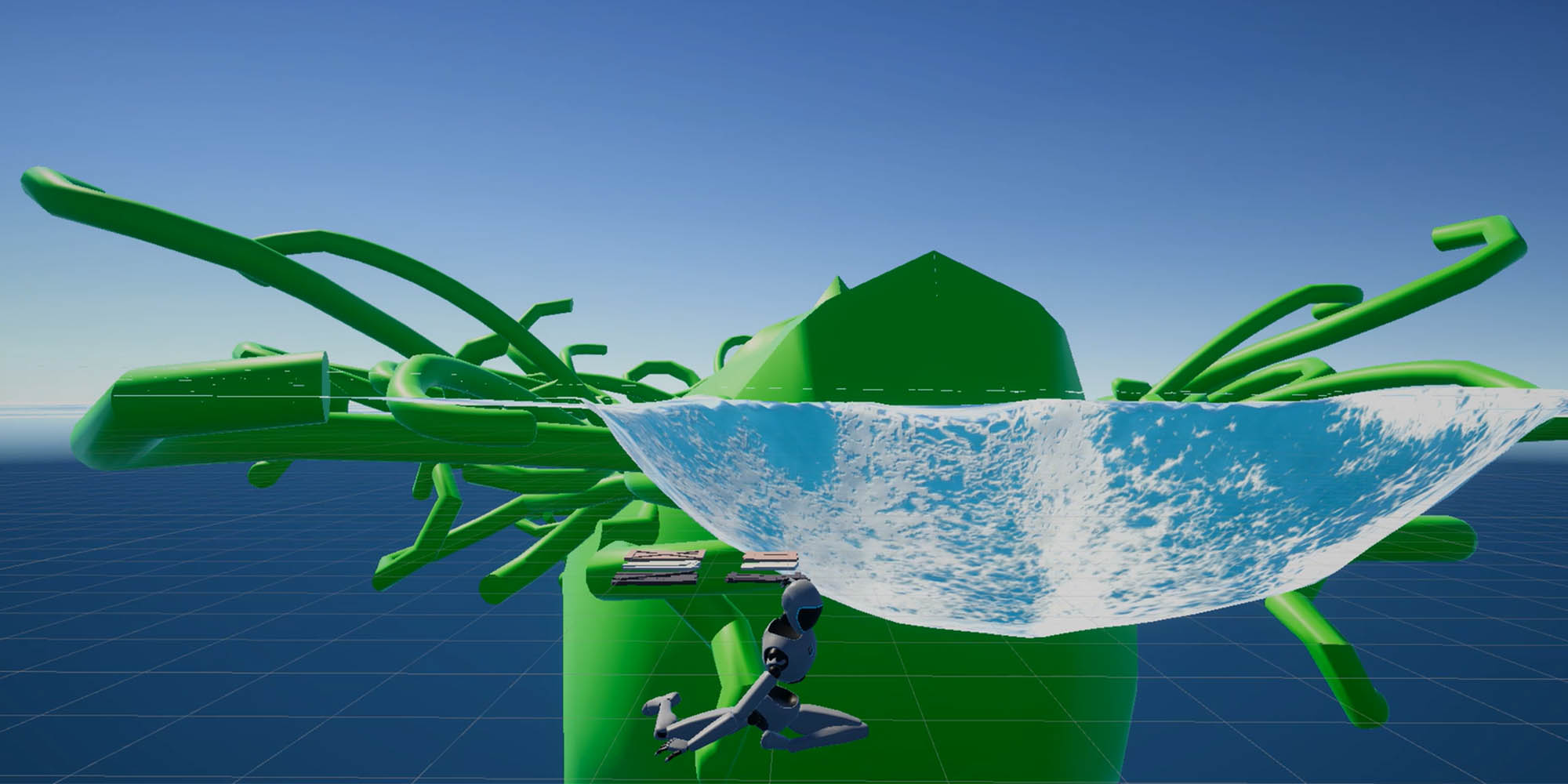 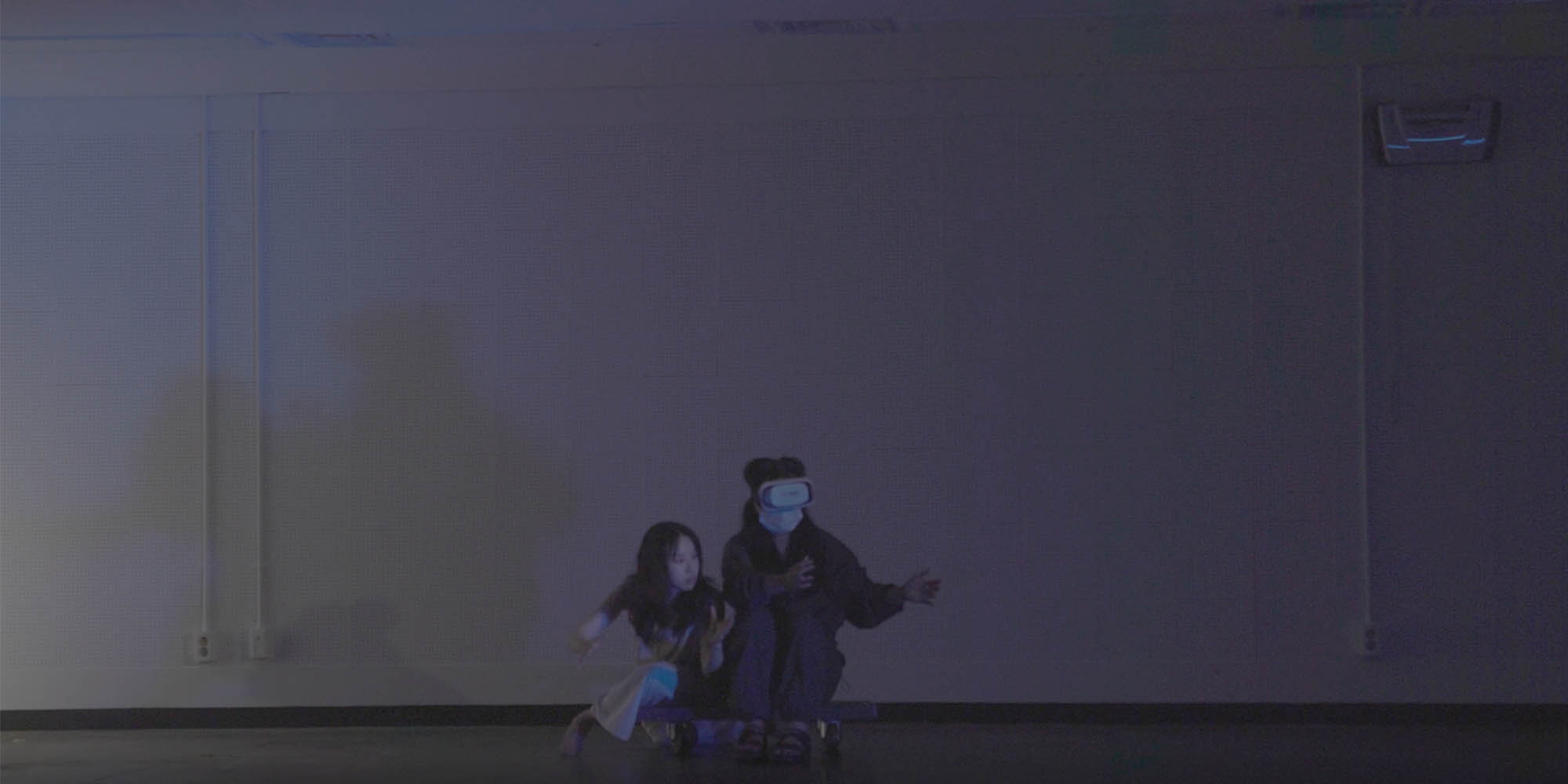 “Thank you so much for making it such a special experience for us. I was happy that many people paid attention to diaspora and performance especially. Through this experience, we are going to develop our art project.”