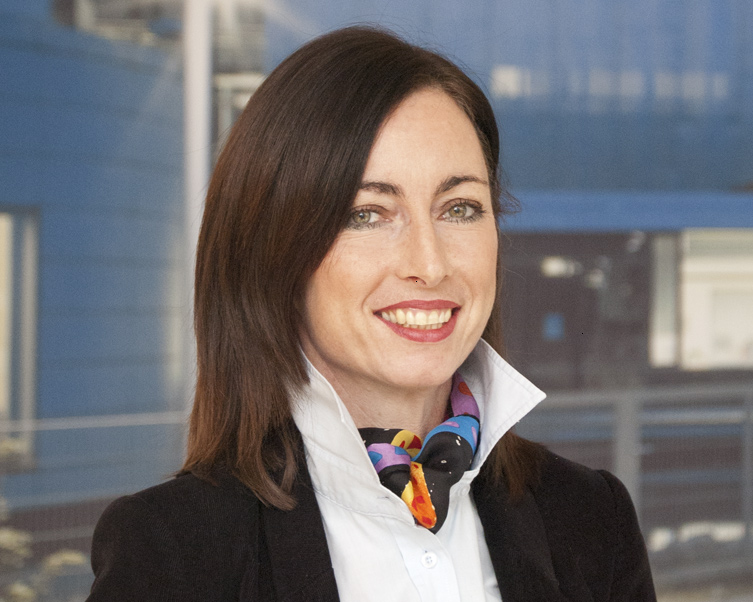 There’s a lot of things to learn from Neuroscience. Dr. Manuela Macedonia talks about the impact that findings from this field can have on a lot of other disciplines and why the knowledge transfer is not always easy. Macedonia will be having her last “Brain For Everybody” – Talk for 2012 on November 15 at 6:30 PM at the Ars Electronica Center, the topic being “Speech Disorders”.

You’re engaged in knowledge transfer from the neurosciences. Please tell us what this is all about.

Knowledge transfer means that the latest scientific findings in the field of neuroscience are explained by experts in terms that laypersons can understand.

Who are these so-called experts?

We at Neuroscience for You (www.das-gehirn.com) define experts as people who have been awarded a Ph.D. in one of this field’s ancillary disciplines (neuropsychology, cognitive psychology, cognitive neuroscience, neurolinguistics) and have been doing basic research for at least three years. Experts should be familiar with research methodologies—that is, how experiments are conducted—they should be in a position to consult primary literature, and, of course, in conjunction with knowledge transfer, they ought to be able to present complex content in ways that are comprehensible by audiences with no formal academic training in these areas.

In other worlds, individuals with a degree in philosophy or education whose background in the neurosciences is self-taught would not be considered potential agents of knowledge transfer in that field.

Right. I think that would do a disservice to the audience. Even if certain content can be explained only in simplified terms, I believe that the expert’s mastery of the subject—both its depth and its breadth—should extend far beyond the particular topic being explained. Only in this way can experts interpret research results, consult serious publications and recognize interrelationships. Of course, even an expert can’t know everything about the brain because that’s impossible, but they should have solid scientific knowledge and skills at their disposal. The audience trusts that the speaker’s remarks are accepted scientific facts, and that’s what they have to be.

How did you come up with the idea of promoting knowledge transfer?

Early one morning in 2008 during a train ride from Frankfurt to Leipzig, I was working on an article for a professional journal when another passenger asked me what I was reading. So I explained to her in general terms what the paper was about. Others seated nearby couldn’t help but overhear us, and, one after the other, they as well started to ask all sorts of questions about learning languages. The conversation was pleasant and fascinating, and when I got off in Leipzig, it seemed that the time had just flown by. Later, in the staff room on my floor at the Institute, I related what had occurred on the train, and my colleagues reported that they too often had similar experiences. So, my first idea was to offer addresses open to the public on the subject of the brain and the process of learning a foreign language. Then, in 2010 when it came to actually putting together a program based on the original idea, I expanded the range of topics and experts.

Every one of your speeches here at the AEC is before a full house. How do you explain that?

AEC audiences display tremendous interest. There are individuals who have missed hardly any of the addresses since the series began [in spring 2010]. I’ve come to recognize some of the faces! A few even travel considerable distances—from Lower Austria, Salzburg, Passau! I also notice that the knowledge of these audience members has grown, in that their questions increasingly take into account material covered in previous presentations. Thus, people really are learning in and from these speeches. This is tremendously gratifying!

How do I explain this?

Very simply—lots of people have realized how important knowledge about the brain is for their everyday life, and they make it their business to obtain that knowledge when facilities like the AEC comply with their educational mandate and establish an effective framework in which to propagate these insights.

Many scientists are in favor of knowledge remaining in the ivory tower. What’s your stance here?

Scientists have been assigned a task by society: Discovering new knowledge. And the output is not intended strictly for science—this isn’t a matter of l’art pour l’art, art for art’s sake; it’s for people beyond the confines of research centers and academia. That’s why I am so totally convinced that it’s absolutely crucial in fields such as the neurosciences that knowledge ought to be communicated to laypeople promptly and on a sound scientific basis.

But shouldn’t knowledge about the brain be an important part of the educational training offered in many professions and occupations, especially those that entail intense human interaction?

Certainly. Teachers have an acute need of knowledge about the brain—as pointed out in the first blog post. But psychotherapists, attorneys and businesspeople can also profit from these insights. Nevertheless, this body of knowledge unfortunately isn’t solidly established in curricula and degree requirements in these fields. At the University of Linz, a colleague and I are teaching the first introductory course of this kind for students in the social sciences. The lecture hall is filled to capacity, but a single course isn’t sufficient.

What’s the outlook for the future? How long will it take until knowledge about the brain actually reaches educational institutions and facilities offering continuing professional education?

Hard to say. There are people in various disciplines who are afraid of opening up their minds to neuroscientific findings because the validity of their accustomed way of envisioning the world would be diminished thereby and their power would be endangered. What they’ve been doing for 30 years would suddenly be called into question, which is hard to cope with. In 2008, when I was still in Leipzig, I was invited to represent the Max Planck Institute at an interdisciplinary symposium in the vicinity of Hannover. The issue at the top of the conference agenda was whether the field of pedagogy needed knowledge about the brain. A simplified synopsis of the participants’ conclusion: We [educators] are already aware of this but just call it by a different name, so we have no need of the neurosciences. You can read the publications (see bibliography below) that summarize the various positions put forth at this symposium!

We encounter denial and rejection in other areas as well—for instance, in certain schools of psychotherapy. These practitioners want to have little to do with the brain, since they regard their work as a matter of “the mind” or even “the spirit”! Just yesterday I happened to see a copy of the magazine “Imagination,” the official organ of the ÖGATP–Austrian Society for Applied Depth Psychology and General Psychotherapy.

In it, I came across a letter to the editor vehemently attacking a recently-published book supporting katathym affective imagery (http://en.wikipedia.org/wiki/Guided_affective_imagery”) on the basis of findings in the neurosciences. The letter’s prose was as stylistically beautiful as its content was abominably bad—elaborations utterly lacking in substance delivered in an aggressively accusatory tone like a moralizing sermon. No scientific arguments, simply the charge, leveled from all possible angles, that it’s impossible to reduce the human spirit to the interplay of neurons. This is the same stuff that Donald Hebb (http://en.wikipedia.org/wiki/Donald_O._Hebb) faced back in 1949 when he published his book “The Organization of Behavior: A Neuropsychological Theory.” During his lifetime, Hebb never got the recognition he deserved, and the blockade of his ideas condemned numerous disciplines to a state of intellectual hibernation from which they are only just now awaking! PS: Today, Hebb is the most frequently cited author in the neurosciences!

Nevertheless, the 2012 Brain Days event in Linz delivers incontrovertible evidence that educators “want” knowledge about the brain. What’s your take on this?

Unfortunately, due to space limitations, we had “only” 220 participants at Brain Days in Linz. In fact, the number of preregistration requests vastly exceeded the venue’s seating capacity. So, yes, there are lots of teachers who are “hungry” for knowledge about the brain, which is why they’re investing their leisure time, their money and, above all, their energy to upgrade and enhance their professional skills. It’s wonderful to see this! They’re rolling up their sleeves and, even without formal training in this discipline, gradually familiarizing themselves with the findings and insights emerging in it. They’re broadening their horizons and keeping pace with the times. Needless to say, these aren’t the ones maintaining that they don’t need knowledge from the neurosciences. Of course, it might also be the case that a lot has changed since the above-mentioned symposium in the vicinity of Hannover. Perhaps consciousness has been raised considerably in the intervening four years. Or could it be that that Austrians are more enthusiastic than the educators I confronted then in Northern Germany? What’s still lacking, though, is an institutionalized link-up of pedagogy and the neurosciences in order for this knowledge to be available on an ongoing basis to all who need it. An event like Brain Days is a laudable effort to propagate the latest findings but it’s still a one-shot deal that can reach only a small fraction of all those who are interested. For example, we were unable to accommodate many students at teacher training facilities in the Province of Upper Austria who would have liked to attend. That’s a pity, since this would have meant imparting this new paradigm to future teachers even before they begin their educational careers.

So, what you refer to as institutionalization could be the “marriage” of pedagogy and neurosciences.

Sure, that’s one way to put it. Brain Days once a year isn’t enough. Experts in the fields of teacher training and the neurosciences have to collaborate. The output of this interdisciplinary effort could be applied in everyday life in the classroom in the form of tools with a neuroscientific basis, “instructional recipes” so to speak that, in light of insights into learning processes and the brain, are more efficient than what’s currently being used. Now, by no means does this imply that everything has to be reinvented. Tried-and-true approaches ought to be retained. Occasionally, good things just seem to go out of fashion and are unjustifiably eliminated in conjunction with reforms and trends. With respect to teaching foreign languages, I could go into great detail here. I have lots of examples!

Dr. Claudia Schmied, head of the Austrian Federal Ministry for Education, the Arts and Culture, presided over the opening of Brain Days. Did you have a chance to talk shop with her?

Unfortunately, there wasn’t enough time for a nuts-and-bolts discussion with Minister Schmied. Perhaps we’ll have another opportunity. It would be great if she as well would confirm the urgent necessity of this “marriage” of pedagogy and the neurosciences. She could also initiate measures conducive to making this happen. Nevertheless, it was terrific that Dr. Schmied came to Linz to open Brain Days. I couldn’t have wished for anything better in my wildest dreams! In doing so, she sent a clear message that she too is in favor of knowledge transfer from the neurosciences to pedagogy. I find this extremely gratifying. In her speech (here in German), she quite aptly pointed out that pupils’ minds are our future. The better they develop as a result of formal education, the better the opportunities open to each individual pupil and the brighter the outlook for society as a whole. This is reality. We can’t do without the potential of even a single child. After all, there’s hardly any industry left in Europe. And what’s still standing isn’t an old-fashioned assembly line; it’s high-tech production. Our future is Brain Power. And this is why it’s so important that pedagogy develops into—formulated in rather visionary terms—the leading-edge technique of impressing minds.