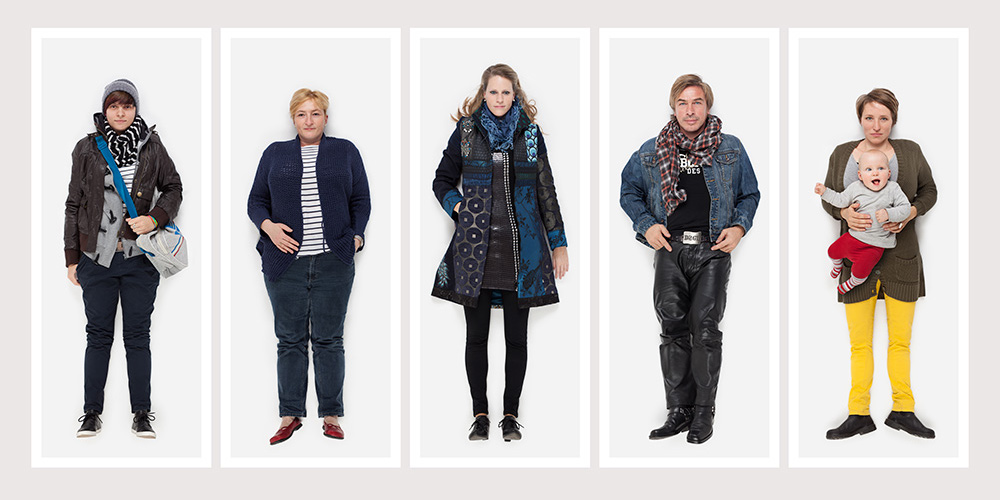 Upper Austrian photographer Kurt Hörbst’s full-body scans reconnoiter the surfaces covering and adorning the human body in search of remarkable details. His imaging technique is an intentional deceleration of high-speed digital photography. The portrait subjects lay flat on the floor while they’re digitally scanned, one pass after another, by a high-definition digital camera that moves along a specially designed rail system. The subjects have to freeze and maintain their pose for one to two minutes. Hörbst takes up to 20 individual exposures of each subject and then assembles them on a computer. We talked with Kurt Hörbst about his project that will be shown on THU March 7, 2013, 8 PM, during the exhibition opening of “people_scans” at the Ars Electronica Center. 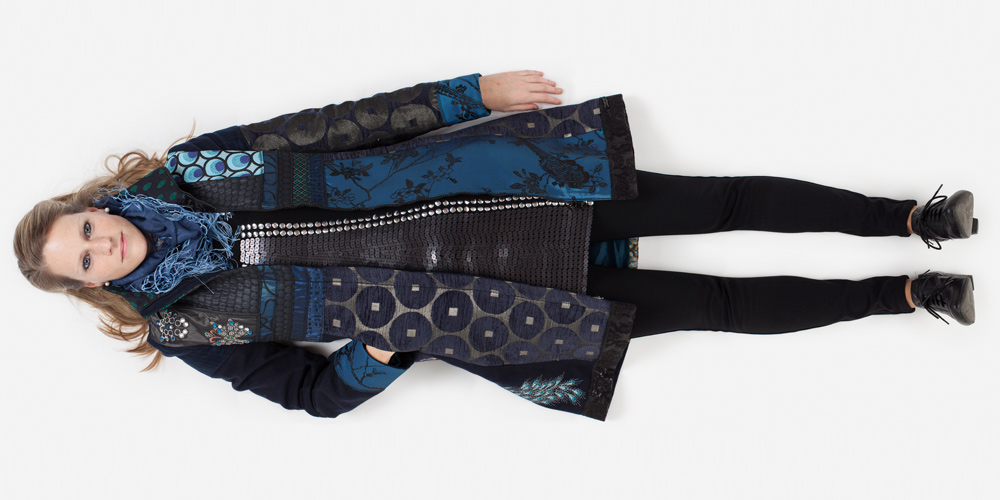 How did you come up with the idea of scanned images of people?

In 2005, I launched the “landscape_scans” project that dealt primarily with extremely reduced landscape surfaces. The point was to produce high-definition monochrome images of landscape details in which every mote of dust and blade of grass are recognizable. Over the course of this project, it occurred to me that it would also be interesting to use this scanning process on human beings as a way to work with human surfaces.

The initial attempts to photograph my family with this apparatus worked quite well, but after the first exhibition and a presentation at a festival in Finland, I didn’t pursue “people_scans” as intensively for a while because I was involved with other projects. One represses certain things and then they surface again. But when they repeatedly reemerge and take on a certain substance, by then, at the very latest, one realizes that there’s something to this, that one would like to go further with it. The call for submissions to Venice came at precisely the right time. Once my scan project was accepted, I pursued it rigorously for a month there during my stint as artist-in-residence and scanned Venetians. That too worked really well, and resulted in lots of full-body portraits.

Then I realized that there are interesting possibilities to conceive the project in somewhat larger terms: If I say, OK, now I have Venice; maybe I can also do Vienna, maybe I could do it with various groups of people, perhaps I could even create a much greater overall picture of humanity in the early 21st century. I don’t yet know exactly where this is actually taking me and whether something like a sociogram of our society will ultimately emerge from it. But basically, I can say that I was sure right from the outset that it makes sense to keep scanning and see what results from it. 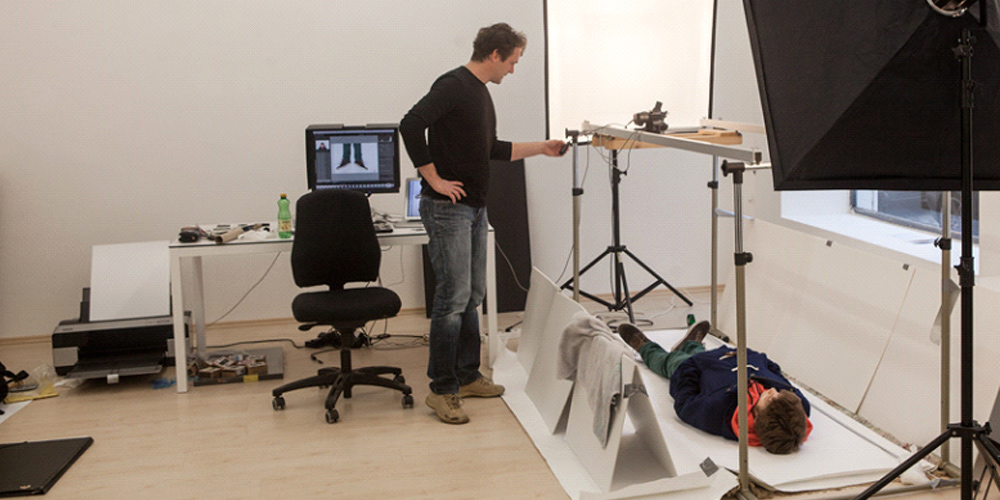 You sought out people who were ready to pose for high-definition scans. How did you approach them, and what sort of difficulties did you face?

Up to now, I’ve done scans in a really consistent way only twice—in Venice and Vienna. In Venice, we actively recruited our subjects by sending two staff assistants out into the city to literally accost people and tell them about our project. And some of them showed up. And I also went out in the neighborhood around my studio with my wife, who speaks Italian, and we approached promising candidates. Some agreed right on the spot and came with us; some stopped by a couple of hours later; and some said they’d come another day and we never saw them again. In Vienna, we took a totally different approach: we set up a website at which people could upload a photo as a sort of application. After this online casting call, I short-listed about 30 individuals, whereby I tried to achieve a cross-section of old and young. As far as who gets chosen: there are no criteria, since everyone is interesting in some way or other.

And now, I’m even receiving invitations. It’s gotten to the point that I feel I’m carrying on the 19th-century tradition of the itinerant photographers who traveled the country in a horse-drawn trailer containing a mobile darkroom so they could develop their pictures right on site. I too come around with my “digital carriage,” stay for a while, photograph people, travel to the next venue and leave something behind. I’m fascinated by this aspect, also the fact that the people who invite me see only particular elements and not the whole thing.

The view of the project is thus constantly changing?

The way I see what I’m doing is in continuous transition while I’m doing it. Which, fundamentally speaking, I think is a good thing, also in light of my original ideas on this subject. Here as well, some things have declined in importance and others have come to the fore. As for the content, I see some things differently today after having been dealing with them over the course of a few years. One’s view of one’s own work changes constantly. New elements are added; others, in turn, drop away, although much of my project has actually remained the same. It’s always the same light, the same background, and the subjects are always basically in the same position.

I’ve already been approached by people who’ve asked if it wouldn’t be better if the subjects were a bit friendlier and would smile a little more, but I think that wouldn’t work well, at least in this phase, because, after all, I’m taking a documentary approach here. I’m making a record, registering manifestations of a segment of time and packing it full of an assortment of characters and human surfaces. I photograph all of them the same and, in doing so, attempt to keep the view and the emotions stable. This improves the possibility of bringing out the comparative aspect, this pure superficiality. And if someone would laugh or strike some extreme pose, then my picture would suggest something completely different in the minds of those beholding it. So I make an effort to keep my photographs totally neutral. Whether the subject’s legs are crossed, the hands are in the pants or jacket pockets or just laying there with the fingers somehow intertwined doesn’t really matter, but I’m not looking to conduct lots of experiments as far as facial expressions and extreme gestures are concerned. These distractions would severely diminish the comparative aspect that, as I see it, is totally central to the nature of documentary photography. 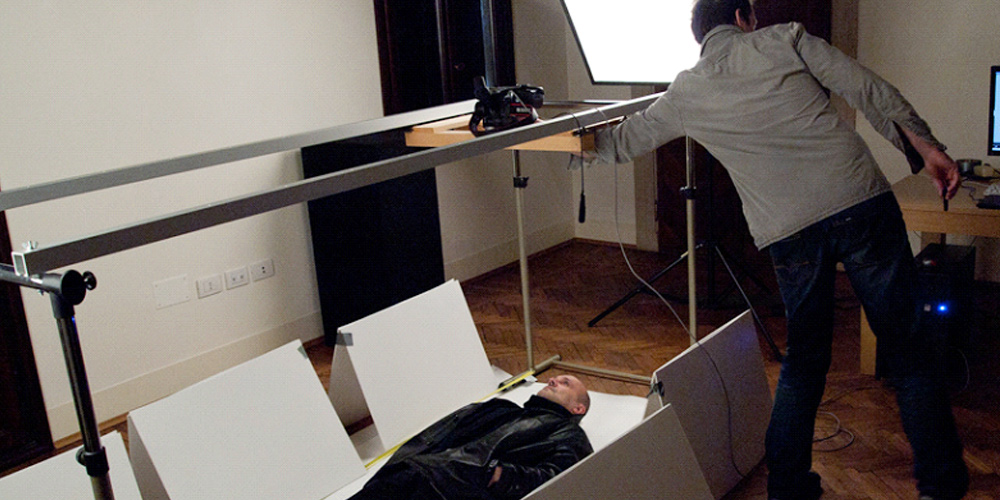 You assemble the images yourself. Wouldn’t automation—for instance, the software used to put together panorama pictures—make your life a lot easier?

The problem with panorama software is that it’s conceived to do a different job. In panorama photography, there’s a nodal point from which the camera is pivoted. In “people_scans,” the linear movement of the camera is dominant. There is no fixed point and I don’t swivel the camera, so this kind of software is totally unsuitable. Then again, there are programs that can be used to automatically assemble a linear sequence of images, but the problem is that this is in most instances software to create reproductions of paintings that are already two-dimensional, which is also not the case in my work. In “people_scans,” there’s also a third dimension that comes into play and that makes it impossible to automatically assemble these pieces. There are flaws; there are areas that have to be manually corrected and where you ultimately have to cheat a little to make it possible for these 15 to 20 individual central perspectives to really merge together into a multiple perspective or into a single image with no perspective at all. After all, when I scan a person with my camera, I have a centered perspective of the head, then one of the chest, one of the abdomen, one of pelvis area, the legs and the feet, and then I put them together. In other words, I’ve applied 15 to 20 central perspectives to a single body—in addition to the prone position of the subject being photographed vertically, which is something else that’s perceived as slightly unnatural. For example, you can see the soles of the subject’s shoes, which is normally an impossibility.

Why lying and not standing?

This has to do with the scanning process and the surfaces that I used to photograph. Actually, the fact is that we spend almost half of our time lying down, but people are hardly ever photographed in this position. Why can’t this be shown? Nevertheless, it was only recently that I even became aware of this point of view. Indeed, this wasn’t my fundamental concept, but I find that it’s by no means unessential. Primarily, however, the point is that the scanning process is flat and works the same way a flatbed scanner does—horizontally. This is ultimately a matter of line-by-line scanning, whereby the lines in “people_scans” have a height of 10-15 centimeters and are thus extremely large in comparison to normal scanned lines.

While your subjects are being photographed, they have to remain stationary for 2-3 minutes. How did you manage to get the baby to hold still for so long?

Little Josefine was easy, simply because I didn’t need as many exposures since she’s so small. Her picture consists of 2-3 shots since I only had to make 2-3 passes with the scanner, and her mother, of course, remained steady throughout. Everything went relatively smoothly and then I selected the best of what came out. What made working with Josefine ever more interesting was that she was much closer to the lens than her mother, which makes her appear much larger. Generally, I work at a distance of about 1.2 meters, and since the baby’s head was 30 centimeters closer to the lens, Josefine seems disproportionately large in comparison to her mother. This is another way in which this type of portrait photography slightly jars the senses. When you juxtapose the two, everything looks completely different. I’m constantly discovering new things I hadn’t considered before. 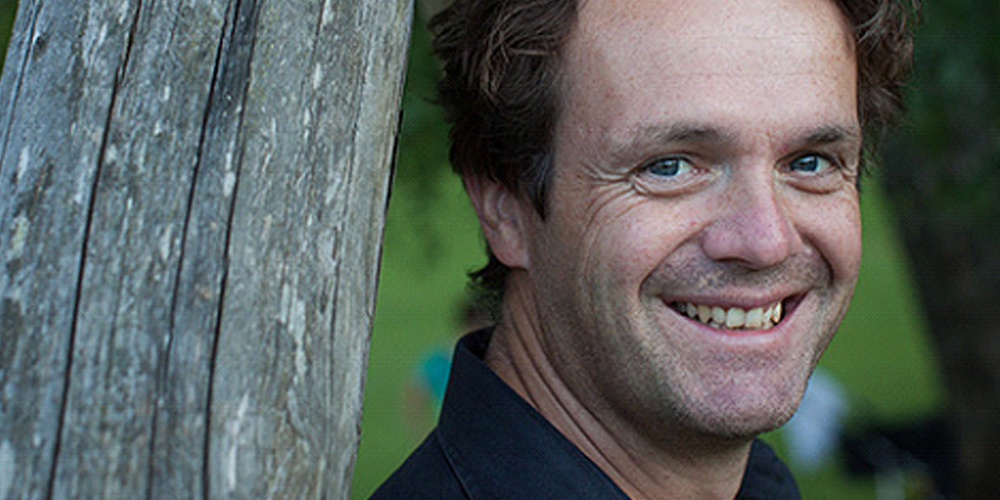 In what direction is this project headed next?

In the future, I’d be interested in looking at particular groups of people—for instance, scientists or athletes. I’ve already contacted the Austrian Ski Association. In April, I’m headed for Darmstadt, Germany, and in May it’s on to Beijing. I’ll be spending early summer in Moosburg, a town in the Province of Carinthia, where the accent will be on village life. The same goes for my stay in Spitz in Lower Austria in 2014, and I’m also planning a trip to Riga, Latvia that year. I think it would be really interesting to focus on a particular group of people, who could then be juxtaposed or displayed simultaneously. But to accomplish this, I really have to get busy collecting and scanning.

people_scans at the Ars Electronica Center

After his 2011 stay in Italy for an encounter with photogenic Venetians as artist-in-residence at the Arte Laguna Foundation, and a 2012 sojourn in Vienna, the exhibition opening of Kurt Hörbsts photographs will take place on THU March 7, 2013, 8 PM, at the Ars Electronica Center in Linz. You will find more information on ars.electronica.art/centerr/en.