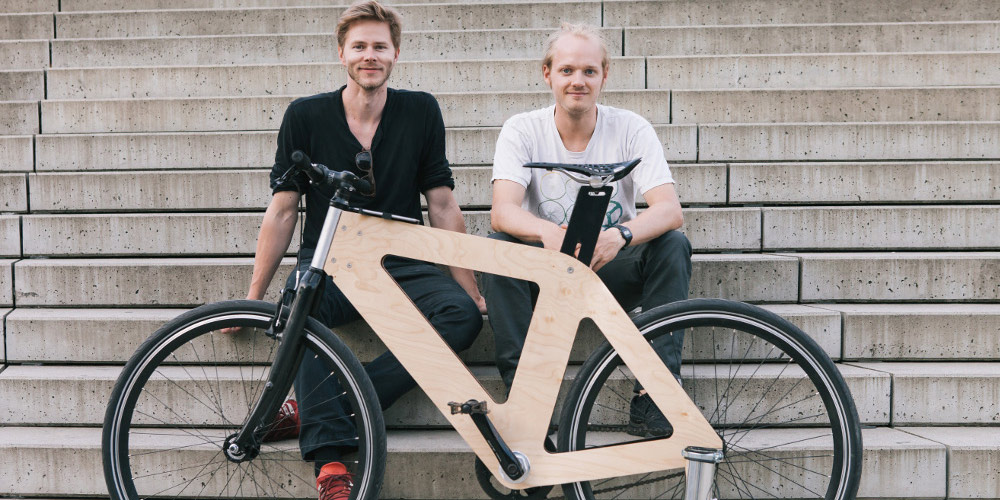 We previously reported on the works of art that Anita Brunnauer, Dietmar Offenhuber and Ursula Feuersinger have produced under the aegis of residencies at the Ars Electronica Futurelab as their takes on “In/Visible City,” this year’s theme of the Connecting Cities cultural project. The next two artists doing a guest stint at the Ars Electronica Futurelab are Christoph Fraundorfer and Florian Born. Their joint approach to the “In/Visible City” theme is entitled ESEL-COMPLAIN [Translator’s Note: Esel, literally donkey, is Austrian slang for bicycle]. It’s an attempt to merge two other initiatives in order to make urban cycling as pleasant as possible. The first is Auto-Complain, which detects potholes by means of an app that’s been downloaded to a smartphone attached to a car’s steering wheel. The potholes are then automatically registered in an online database and marked by a can of spray paint while the car’s on the go. The second is myESEL, which develops bikes customized to suit individual requirements or special needs. This flexibility is the ideal precondition for integrating Auto-Complain into a bicycle.

In this interview, the two artists tell us why, for them, cycling is a philosophy and how their project is designed to motivate others to cycle more. 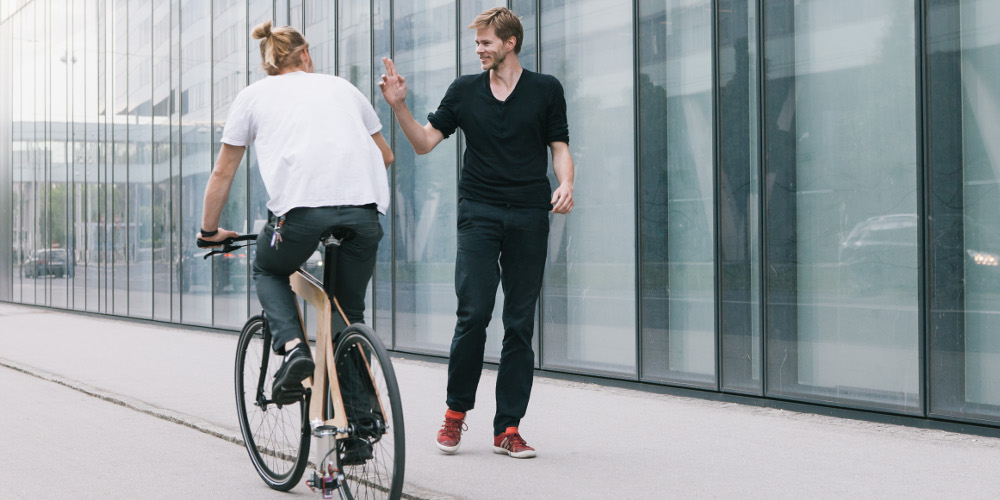 Your ESEL-COMPLAIN combines two other projects: myESEL and Auto-Complain. What’s the connection between you two?

Christoph Fraundorfer: What we have in common is that we regard cycling as a philosophy. Our mission with this project is to get people to realize how great cycling is. Of course, that depends on the quality of the bicycle and how well-suited it is to the user. Of equal importance to us is making cities bicycle-friendlier. Bikes have numerous advantages for urban habitats—they don’t make noise, and facilitate zones of personal interaction. A place characterized by heavy vehicular traffic is no longer an urban space—people just want to get from Point A to Point B and that’s definitely not my idea of a setting for city life. People don’t get together; everyone drives, one person alone inside each car, and the city is grossly degraded as a result. The classic example of a bicycle-friendly city is, of course, Amsterdam. I was recently in Zürich, which is similar. There’s suddenly so much space available. The street lanes are reduced, lots more people ride their bike, it’s much easier to get around town, and you have a totally different feeling in the city. There’s so much going on, there are so many people on the streets, the cityscape is so much more alive, so vibrant. 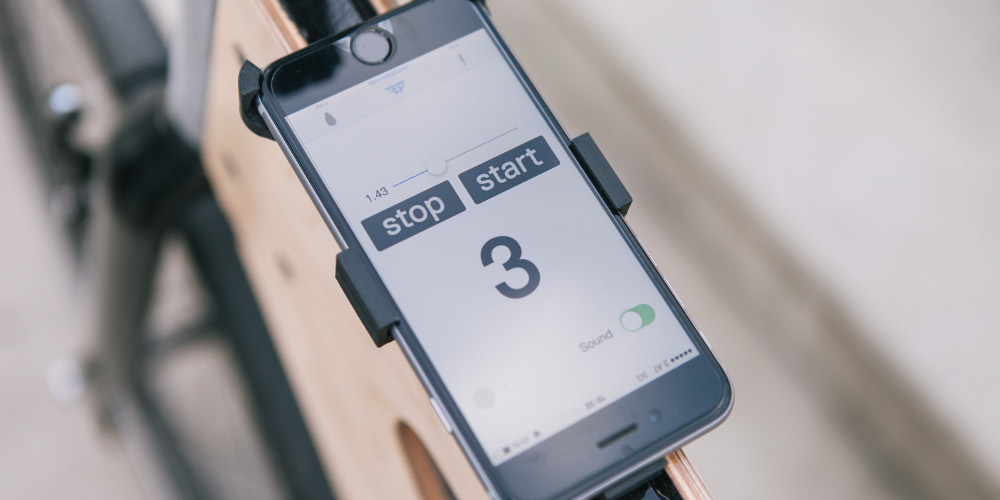 Florian, your Auto-Complain automatically detects potholes when a cyclist rides through one. What’s the story behind this app?

Florian Born: This is an outgrowth of my having worked for three years as a bicycle messenger in my hometown, Bremen. The wind and weather there weren’t a problem, but what really annoyed me were the many potholes in the streets. So I got to thinking about how I could go about filing a formal complaint with the municipal authorities, and I found out that there’s a lot of red tape involved and it’s a big hassle. Now, since most people today have a smartphone with them wherever they go, and some even use it as a navigation device, I got the idea that you could simply use its built-in sensors to automate the complaint management process. This way, a site in need of immediate maintenance is recognized directly and a human being doesn’t have to get involved. So, you ride through a pothole and the smartphone automatically submits a complaint. In conjunction with this project, I immersed myself a bit in the complaint process. And, after all, Germany is famous for its elaborate bureaucratic chains of command as well as for hair-splitting attention to detail—so, when a form isn’t filled out correctly, the complaint lands in the “circular file.” That’s why I gave some thought to simplifying the complaint management process and, at the same time, to how to lodge a complaint in a civilized manner. Complaining usually has very negative connotations and I wanted to put a positive spin on this. So, here we have a public-spirited person reporting that a pothole has been located and it would be nice if someone attended to it. 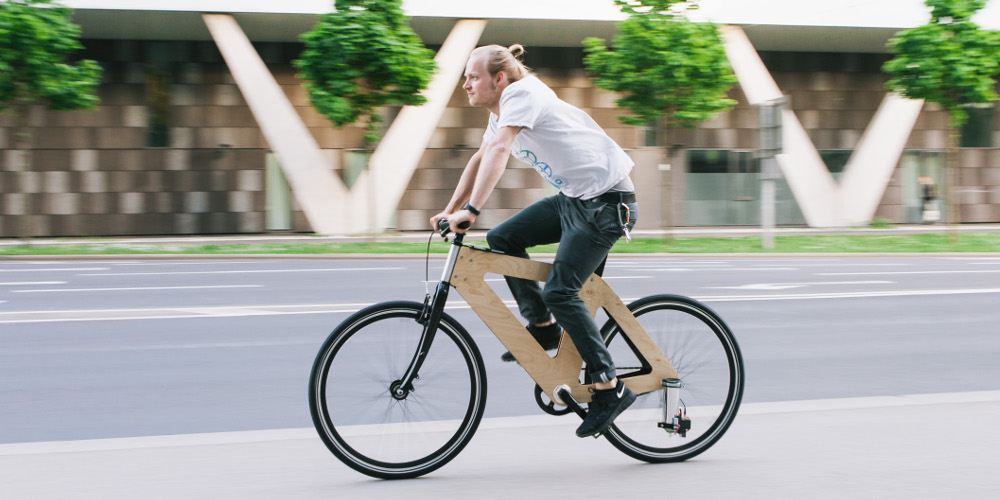 Florian, you’re an interaction designer working at the nexus of new media art and media design. Auto-Complain is a very practical tool. Can it also be termed art?

Florian Born: Actually, I would assign this project to the design field. But my project also consists of a spray device—a can of spray paint attached to the back of the bike that automatically tags the pothole when you ride through it. I wouldn’t attribute this part directly to the realm of media art, but this does have somewhat of the character of a performance, this aspect of riding through town armed with a spray device. So, the project has two parts that tend to go in both directions. 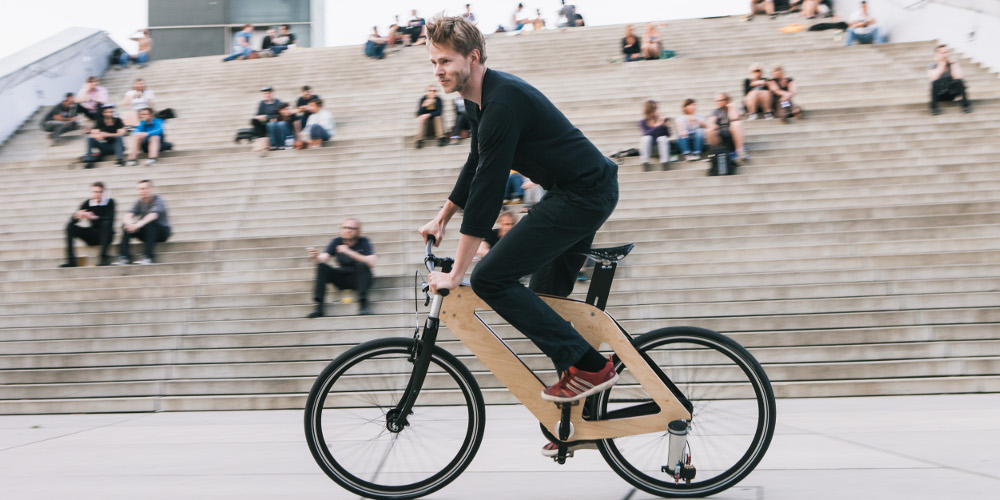 Christoph, you’re the founder of the bike startup myESEL. What do you find so fascinating about designing bicycles?

Christoph Fraundorfer: The idea arose as a response to a specific problem. I do a lot of sports, and one time I injured my knee. The physician who treated me said that I should go cycling to rehabilitate my muscles, since a bicycle is one of the best training devices if you have knee problems. Then one day, my physiotherapist saw me cycling and told me that my posture on the bike was totally wrong and the only effect this would have would be to further exacerbate my injury. This made me aware of the fact that there are surely a lot of people out there who don’t have the slightest idea of how to ride a bike in a posture that’s both healthy and efficient. Retailers sell so many standardized, pre-assembled bikes that just don’t fit the customer, but people aren’t aware of this at all. My physiotherapist then explained to me how to sit on a bicycle in a way that’s healthy and correct. This gave me the idea of building my own bike, one that’s ergonomically suited to me and that I can use to really achieve a training effect. I’m 1.95 meters [6’ 5”] tall, and especially when you have a special size or proportions, it’s very hard to find the right product. That was actually the start of this project. Then I gave some thought to a construction that would not entail added costs if it were to be mass-produced in different types and sizes. So what myESEL offers is a configuration tool that lets customers generate their own bicycles. 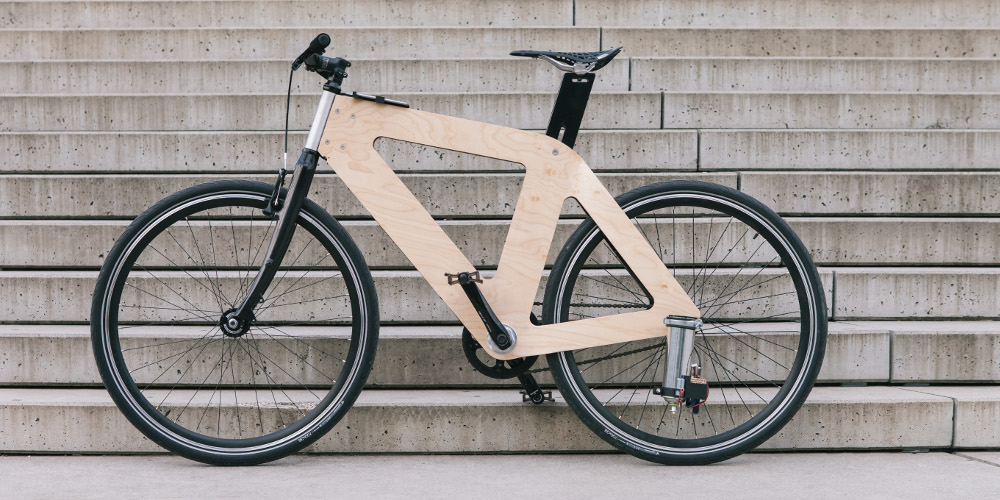 So, anyone can assemble their own bike with this configuration tool?

Christoph Fraundorfer: At present, we’re still in the prototype phase. Beginning in summer, we’ll be releasing a limited number of personalized bicycles to early adopters. In 2016, we’ll begin selling via the online configuration tool as well as selected cycling retailers. The way this works is that you enter your physical measurements into an online form, and the system automatically calculates the optimal positioning of the body on the bike. Then, on the basis of this positioning, it computes the frame geometry of the bike. When the customer clicks on BUY, the system generates all the production data and the resulting one-of-a-kind bike is produced. But the finished product is nevertheless affordable because we do this in a process in which it doesn’t matter if you produce a thousand identical bikes or a thousand different ones—the costs remain the same. 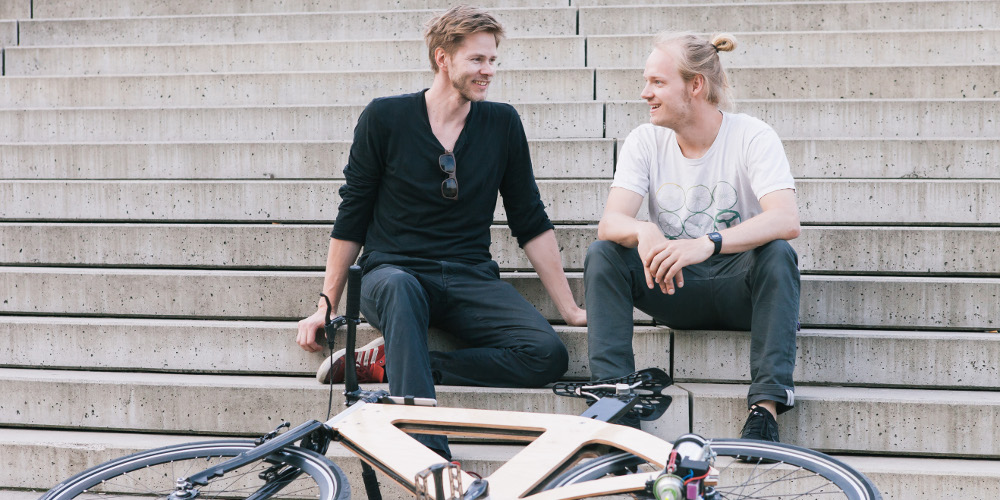 ESEL-COMPLAIN is a merger of your two projects. How hard is it to amalgamate two projects that were developed independently of one another?

Florian Born: In our case, it went very well because we had very similar expectations of the projects. They took very different approaches to be sure, but they share the same objective—making the city a better setting for cyclists, motivating people to do more cycling, and helping them derive more enjoyment from it. My approach is in the direction of utilizing a complaint as a means of optimizing infrastructure.

Christoph Fraundorfer: Exactly, and my approach is more on the supply side. We want to offer a product that enhances cycling and provides more riding pleasure. That’s the focus of myESEL. The bikes are optimized to suit users’ actual needs. That not only means the computation of the correct frame geometry; a bike can also be customized with respect to typology and design. Up to now, what’s usually been the case is that a customer ends up with a bike that most closely corresponds to what they want and is in stock at the moment. The myESEL system brings the necessary flexibility into the ESEL-COMPLAIN project, which supports the combination of the two projects. 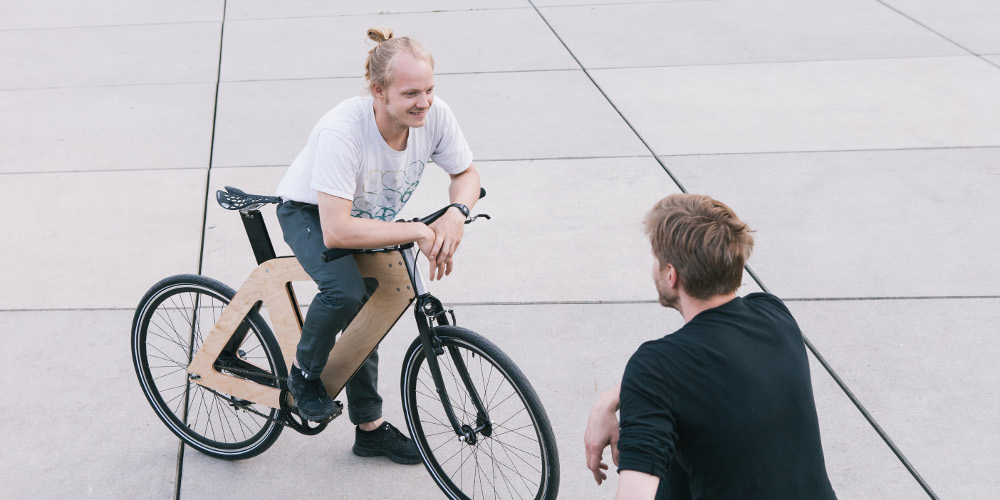 How many ESEL-COMPLAIN bikes will you be manufacturing? Can other people use these bikes too or are you the only ones who can visualize and map the potholes?

Christoph Fraundorfer: The first order of business is to produce a bike that can be used for test drives.

Florian Born: The app isn’t available at the moment due to the fact that Auto-Complain was originally developed under a student license and I’m still in the process of reworking and upgrading it. Needless to say, it would be great if we eventually get to the point at which there really are a lot of people using it or integrating it into existing apps. After all, this is the nature of the project—that it’s being used by not just a single person but by many people, so that it results in a quantitative and qualitative collection of data that bring to light things in need of improvement. Ideally, the Department of Streets will respond to this alert from the cycling community and fix the potholes.

How do think the municipal government will react to your project? Will they be negatively disposed because you’re spray-painting the streets or see it in a positive light because you’re lightening their workload?

Florian Born: If you ask me, I absolutely can’t imagine that the municipal administration or the Department of Streets wouldn’t look kindly upon this project—after all, we’re relieving them of a hell of a lot of work! Coincidentally, just as I arrived here at the Futurelab, a city crew was in the process of inspecting potholes on the Nibelungen Bridge adjacent to the Ars Electronica Center. This has to be done manually, and it’s a very elaborate process. But when you get these data directly from the locations of the most pressing problems, then this is actually a win-win situation: the cyclist benefits from a smoothly paved surface, and Department of Streets personnel don’t have to gather the data themselves. This is process optimization, so I really don’t think they’re going to put up resistance to this type of approach.

Christoph Fraundorfer: That’s exactly how I see it. I think it’s in everyone’s interest. The most important thing is that the data are fed in automatically, which means no manual work and no duplicated effort by city crews.

Florian Born is an interaction designer, who is working between media arts and media design. His projects focus on connecting the virtual with the physical world. He works with new technologies, the field of creative coding and crafting things. In 2013 he graduated from the digital media program of the University of the Arts Bremen with a bachelor of arts. In 2015 he won a New Face Award at the Japan Media Arts Festival for his project Auto-Complain and the German Newcomer Award Gold for his work as a whole.  He currently lives in Berlin, where he studies new media in a master program at the University of the Arts Berlin. He also works for the German research agency Fraunhofer-Gesellschaft.

The result of ESEL-COMPLAIN will be shown at the Ars Electronica Festival, Sept. 3 – 7: https://ars.electronica.art/postcity/en/