Rhythm as the DNA of music 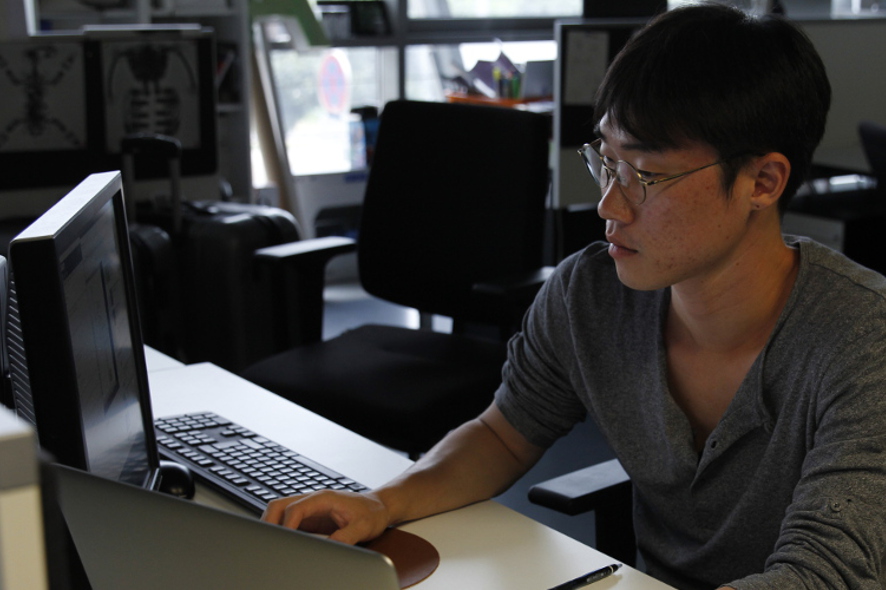 We are happy to announce the second winner of the CAT@Ars Electronica residency: Hyungjoong Kim. During his residency at the Ars Electronica Futurelab he will explore the traditional Korean music and develop an interface to change the rhythm of music. The aim is that the traditional Korean music is so varied that even today’s generations want to hear this music again more often.

He wants to deal mainly with the music genre called “nongak“. The title of his project “Jangdna” consists of “Jang”, the Korean word for rhythm and DNA, because by doing these changes in rhythm the fundamentals of the music will be changed: thus the rhythm may be understood as the DNA of music. The result of Hyungjoong Kims project “Jangdna” will be unveiled at the Ars Electronica Festival 2015. For the interview Hyungjoong Kim talks about his project.

In your artistic research you are dealing with the question of how to create a connection between people and technology by means of visualization of sound and music. How can people be connected to technology?

Hyungjoong Kim: Why do we perceive the world through using technology that is made of ‘0’ and ‘1’, rather than perceiving as it is? In my perspective, human is a being that feels the most anxiety in this irregular and uncertain nature. We always make a regularity and hypnotize ourselves into it so as to liberate us from this anxiety. What I meant of convergence of human and technology is a series of this hypnosis. I am not going to judge this hypnosis is good or bad. However, I want to reveal and let people experience this process through the senses so that can acquire some kind of meditative insight of us. 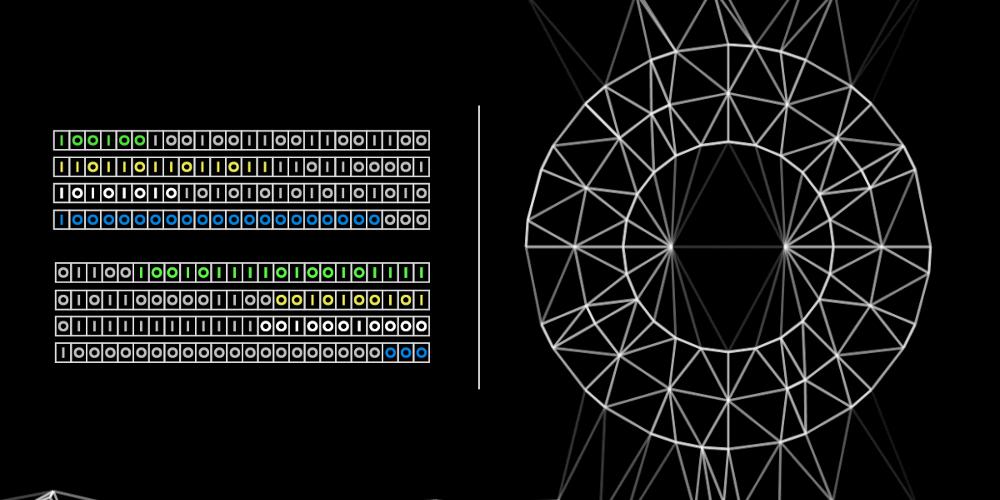 Your project “Jangdna” will present the rhythm of traditional Korean music. How did you come up with the idea?

Hyungjoong Kim: Before talking about traditions, I’ve been focusing on this regularity and the sequence of a sound. When the sound gets pattern on the time sequence, it does not exist just as a sound itself but as complete circular pattern. Every time I listen to a certain hypnotic loop, I feel like the rhythm is formed as a cell that has its own rhythmic information – time or beat – in my body. I would say, this information can be considered as DNA. Similar to biological DNA, I think this also can be inherited by my ancestors. This is why I start to research on Korean traditional rhythm, Jangdan, trace back to the basis of my rhythmic cell. 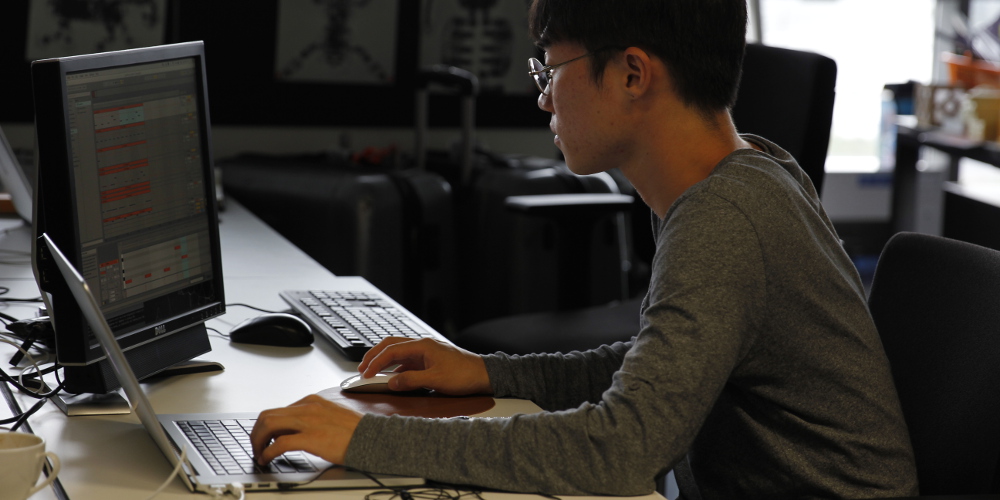 How important is traditional Korean music in Korea? In Austria traditional music is nowadays often only heard by older people…

Hyungjoong Kim: As you said, traditional music is also often only heard by older people in Korea as well. As time goes by, it might be ended up as a classic even for elders after all. I am in mid of twenties now and my interest is in electronic music, not in traditions. In addition, I have a doubt about the saying tradition has to be passed down. If it does not have intriguing factors in it, it should be naturally vanished. However, I think tradition is already melted in us. Even though it will not be expressed as an old manner, it will be reinterpreted or developed in any way, like what I do in this work.

You will focus one specific music genre in your work called “nongak”? What is this this kind of music?

Hyungjoong Kim: Yes, “nongak” is one specific genre within traditional Korean music and it is played by five instruments whereof each represents one of the five elements of nature: kkaenggwari, gong, buk, janggu, and taepyeongso. The structure and rhythm of nongak music is based in the idea of Ying Yang. The harmonized rhythm of nongak is supposed to evoke the gods from the nature to chase evil spirits and in order to pray for a rich harvest.

With the developed interface you would like to change the traditional nongak rhythm. How are you going to change Nongak exactly?

Hyungjoong Kim: In order to explore the basic form of my rhythmic cell, I analyzed a few traditional Korean rhythms as DNA and extract Jangdna, which can be considered as elemental. At the Ars Electronica Festival 2015 I will make the combining process between this and the other components extracted from audience to generate a real-time rhythm and visuals. I can’t say this will be a future vision of nongak. But at least it would be a great experiment dealing with traditional Korean rhythm and visualize it. 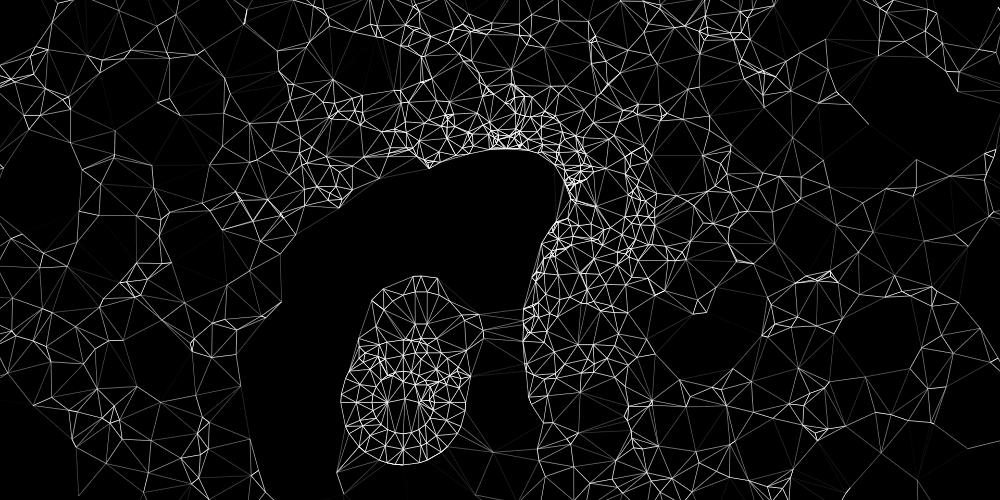 Hyungjoong Kim: The Interface will be very simple. Once one person from the audience of the Ars Electronica Festival speaks something through a microphone, his or her rhythmic cell will be extracted, and will be combined to the rhythm of the existed Jangdna.

As a media artist Hyungjoong Kim is interested in how digital technology melts into human life. His main artistic research area is in the field of audio-visual interaction where he explores the visualization of sound and music in order to let audience experience the convergence of technology and human. He works as Research Assistant at the KAIST Graduate School of Culture Technology in the Information Based Design Research Group and at the Music and Audio Computing Lab. Besides of music visualization and interactive audio projects he works on questions of how to develop cultural content according to users’ needs and supplies.

You can see and try the result of Hyungjoong Kims project “Jangdna” for yourself at the Ars Electronica Festival 2015, in this year’s festival location, the former postal service’s letter & parcel distribution center, from 3rd to 7th September 20015.