Day 2: Hustle and Bustle in the PostCity 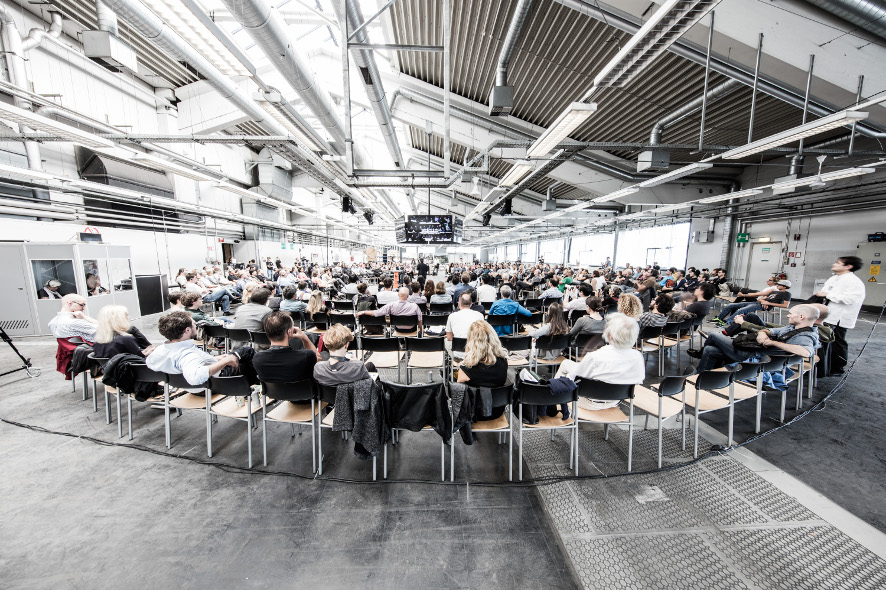 Day 2 of the 2015 Ars Electronica Festival is over and there is hustle and bustle at the PostCity, this year’s central festivallocation. One symposium followed the next one, while children and young people played, tinkered and programmed at u19 – CREATE YOUR WORLD. In the meanwhile this year’s theme exhibition invites the visitors to explore the works and projects of many international artists between old package slides. 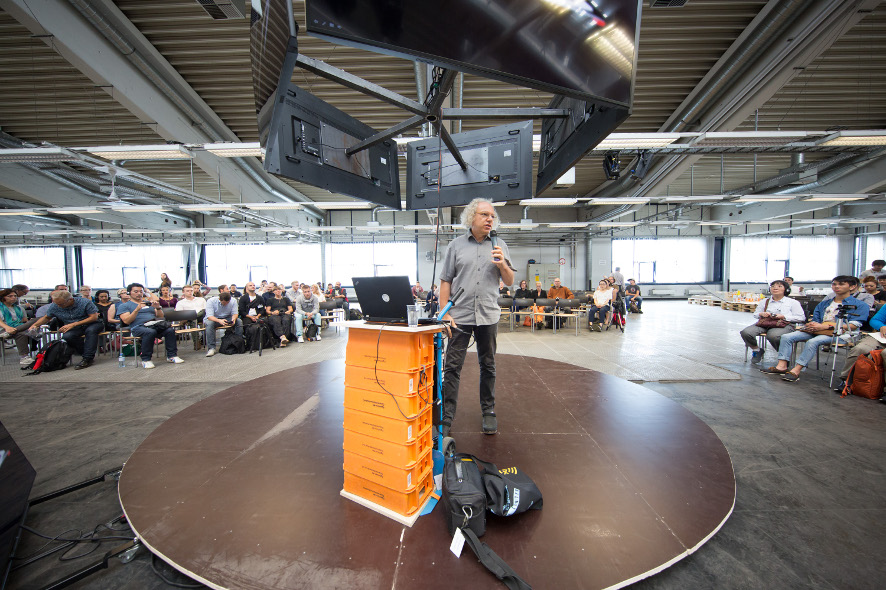 In the morning the first theme of the symposia was Future Mobility was first picked up. It began with Alexander Mankowsky, futurologist at Daimler AG. He gave insight into the automotive R&D going on at Mercedes-Benz and presented the research vehicle F 015 Luxury in Motion. 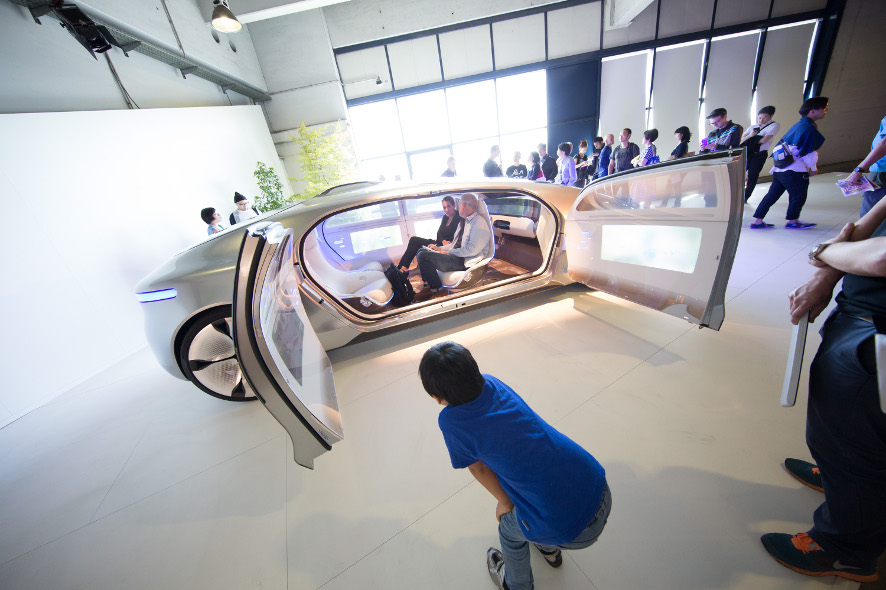 The F 015 Luxury in Motion is also part of this year’s theme exhibition in the PostCity – the PostCity Kit Exhibition. This research vehicle gives a pretty amazing preview of what the self-driving car of the future might look like. The F 015 not only represents the technical realization of autonomous driving. It also shows how self-driving cars are going to change our society as the automobile moves beyond its role as a means of transportation to become a mobile living space. This relationship between humans and autonomous vehicles themes Martina Mara, robot psychologist of the Ars Electronica Futurelab in Post City Symposium. 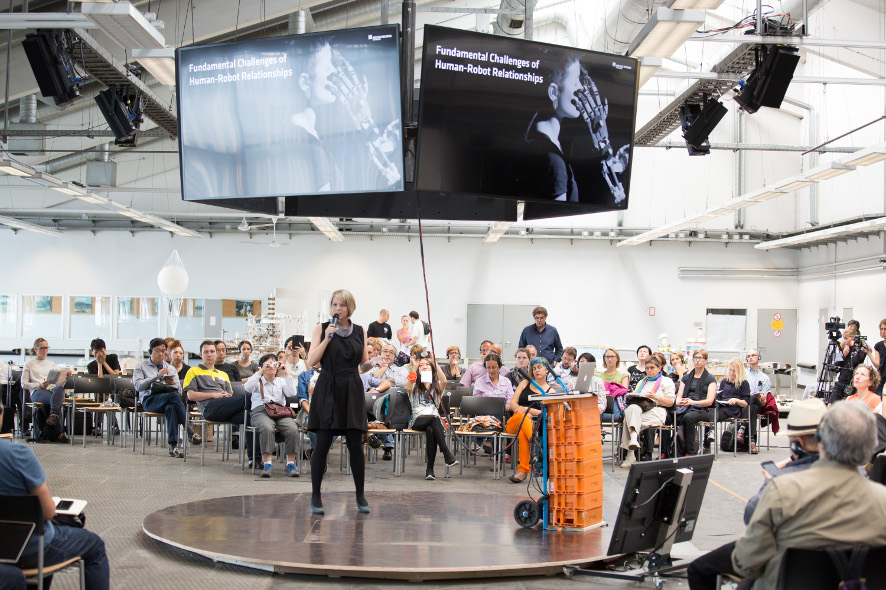 After her interesting speach Shunji Yamanaka and Takayuki Furuta of the Future Robotics Technology Center presented their latest robot, the Halluc IIx. He’s robot and vehicle in one, as its mounted wheels can be transformed to “legs” if necessary with which it can move on adverse terrain conditions. 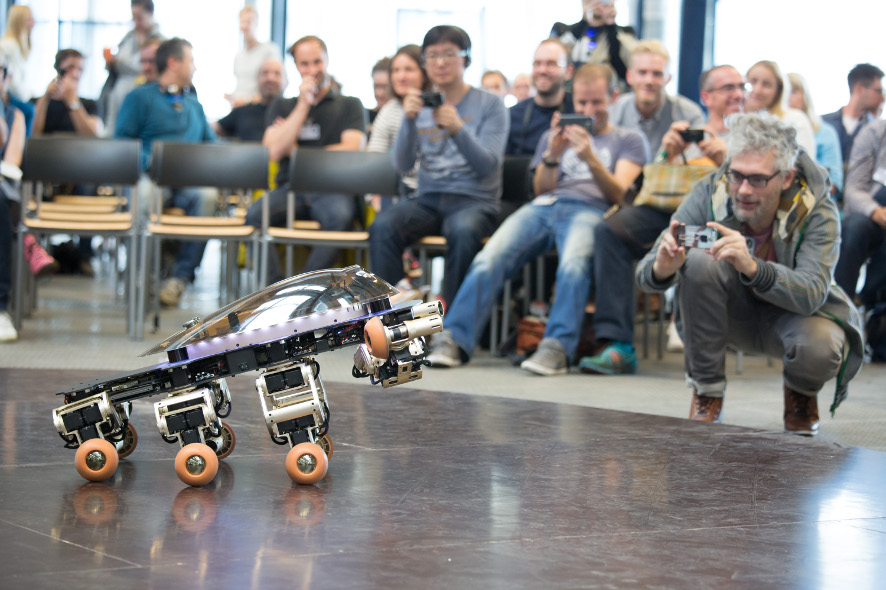 The topic of Future Mobility has not only illuminated the future of driving. It took also a look on an issue that currently all very busy us: the movement of refugees. In the symposium, the German development worker Kilian Kleinschmidt talked about the movements of huge numbers of refugees: Ning with the great many Chinese people leaving that country’s rural areas. 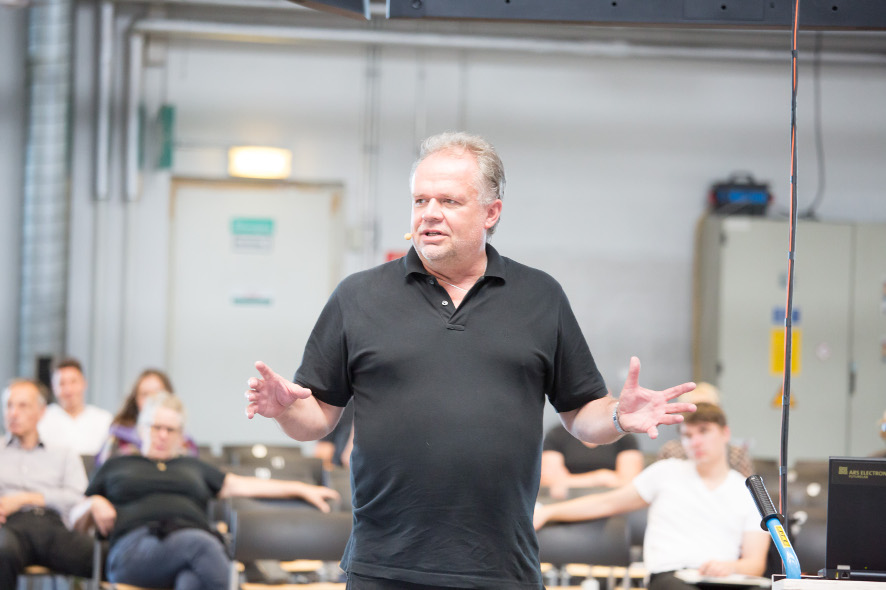 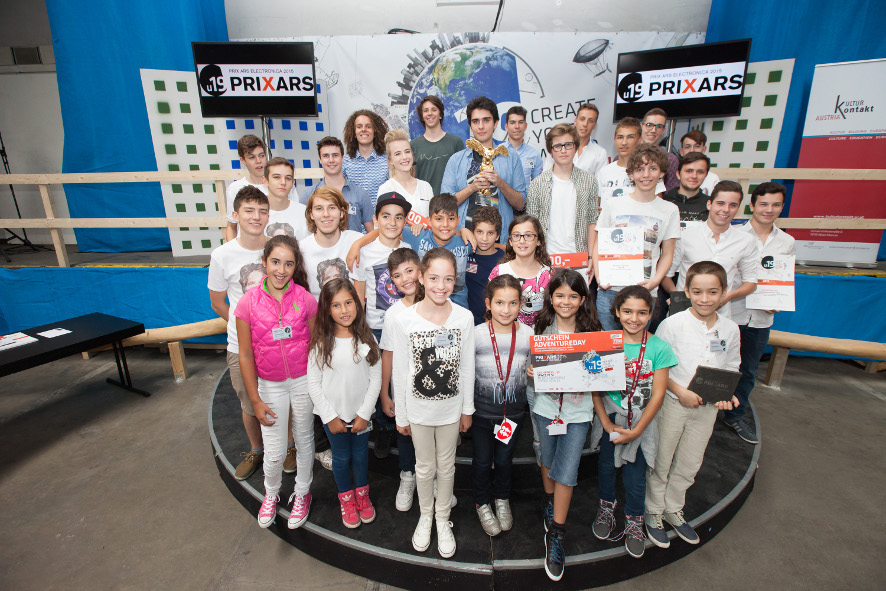 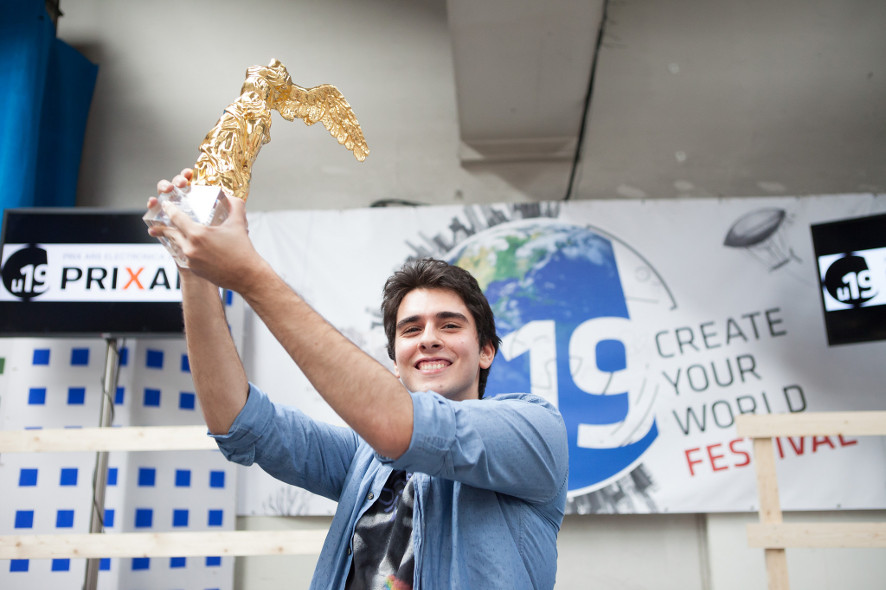 In the world of u19 – CREATE YOUR WORLD children and young people had again much to discover today. It was played, tinkered and programmed. 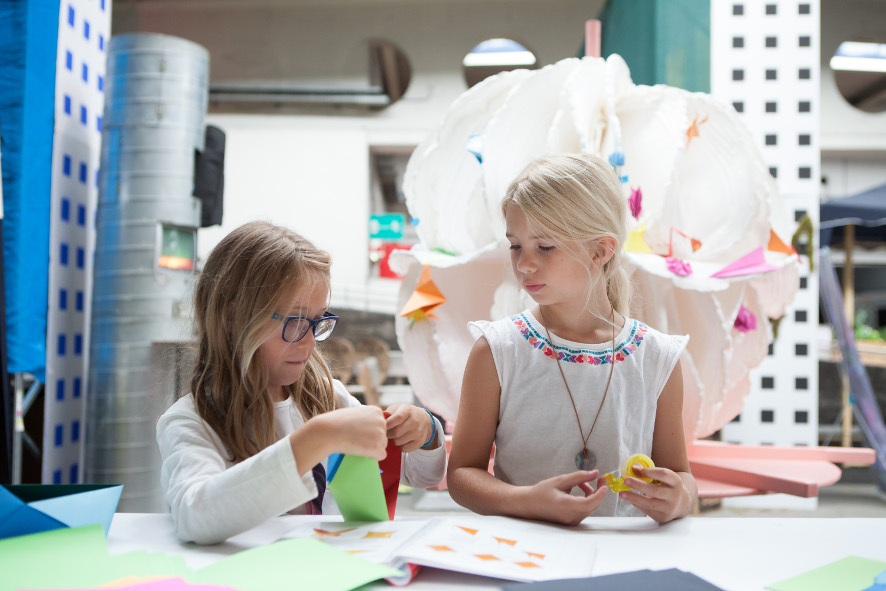 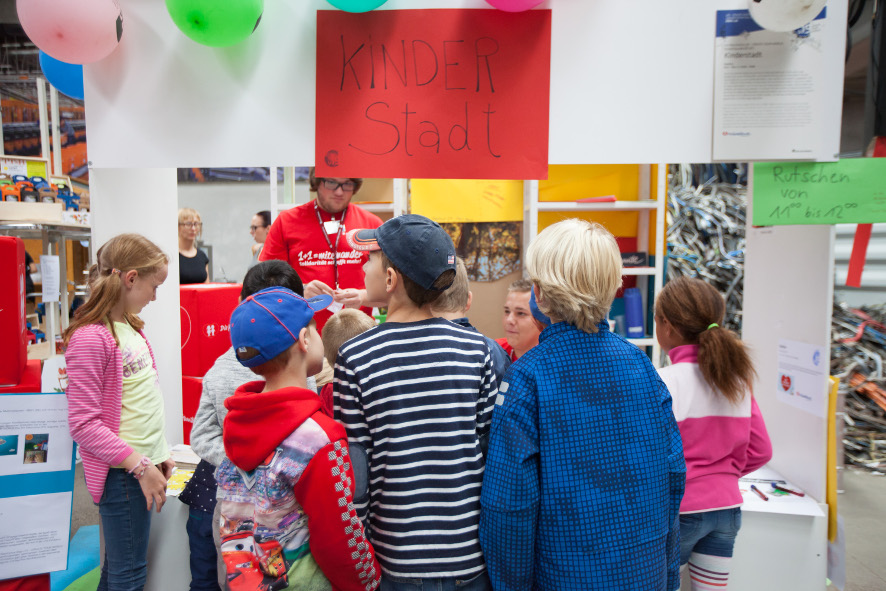 Besides the area of u19 – CREATE YOUR WORLD directly borders the Post City Kit Exhibition. Here you can find ideas, strategies, devices and prototypes for the city of the future. 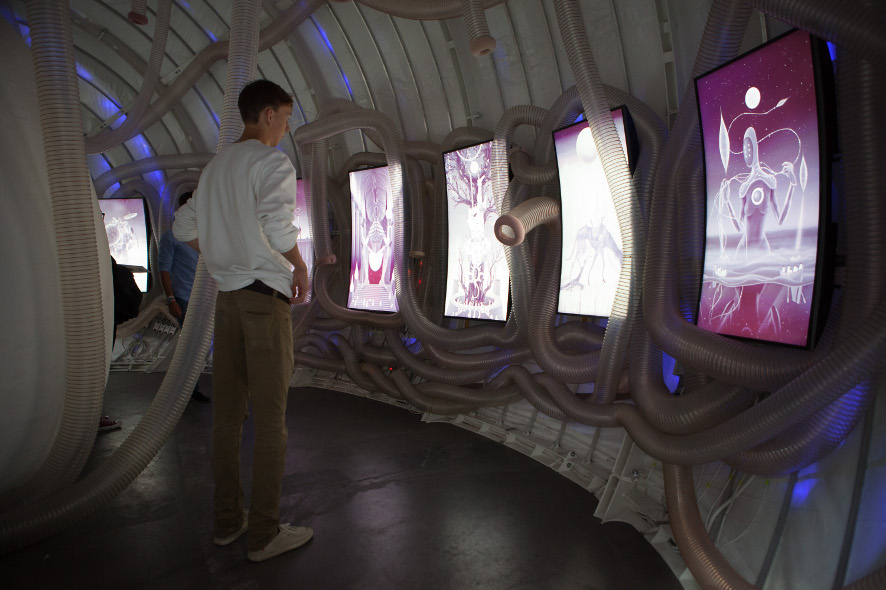 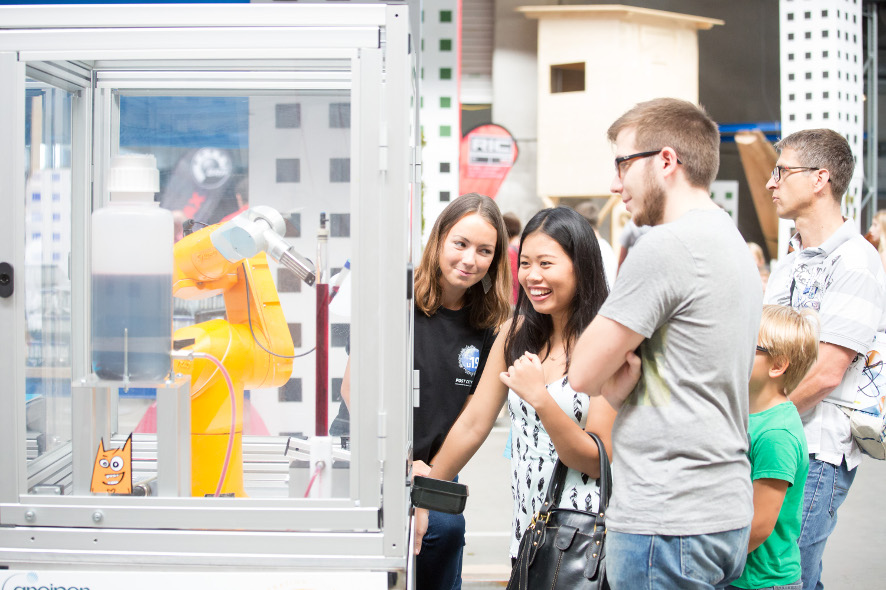 After a short snack in the lunch break the afternoon went on with the symposia. 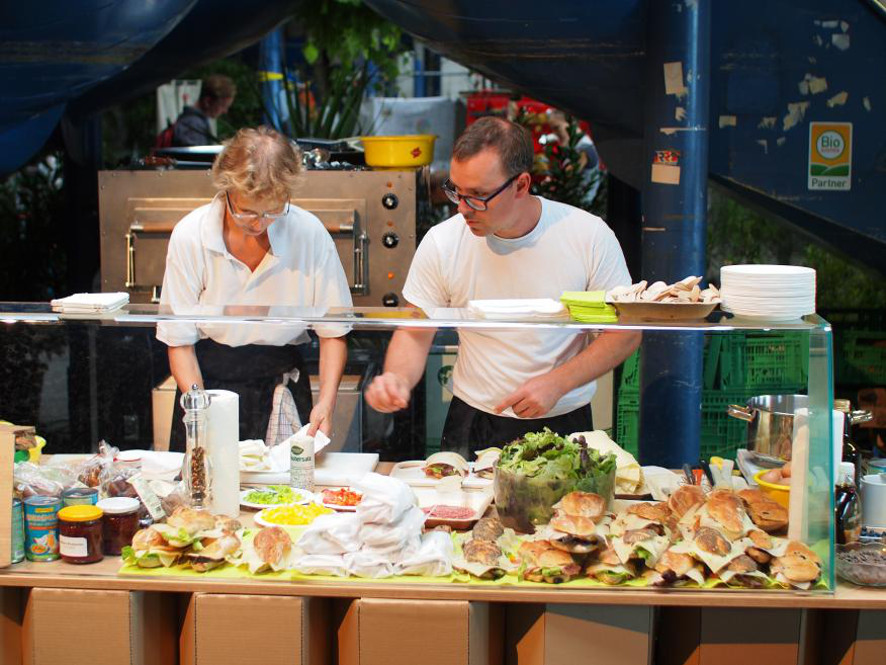 The theme this time was Connecting Cities – Connecting Citizens. From various perspectives the speakers talked about how future Smart Cities can best draw upon the imagination and inventiveness of their inhabitants. 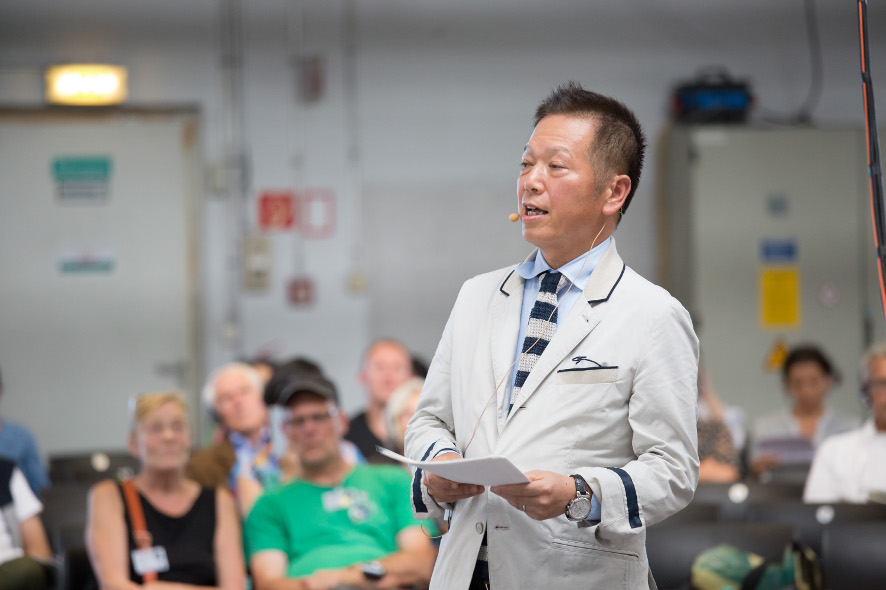 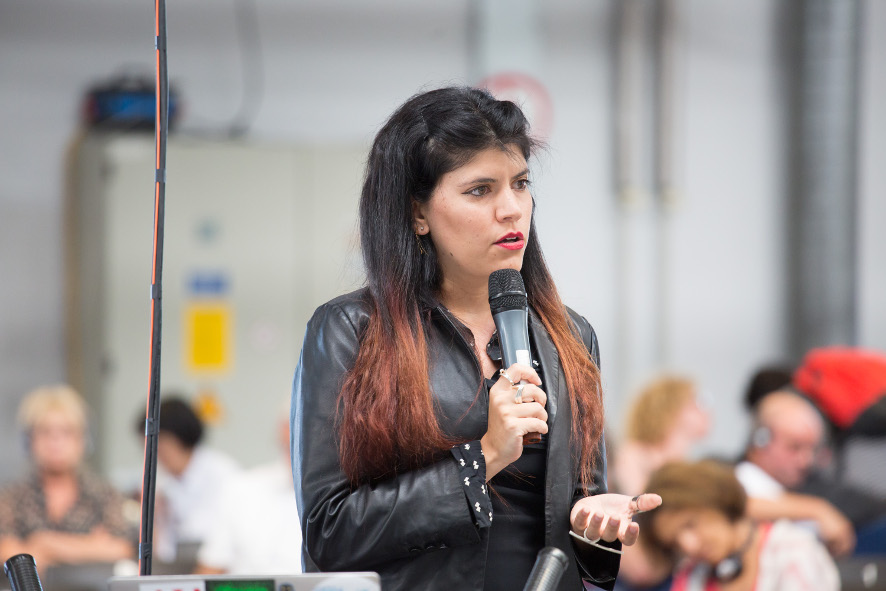 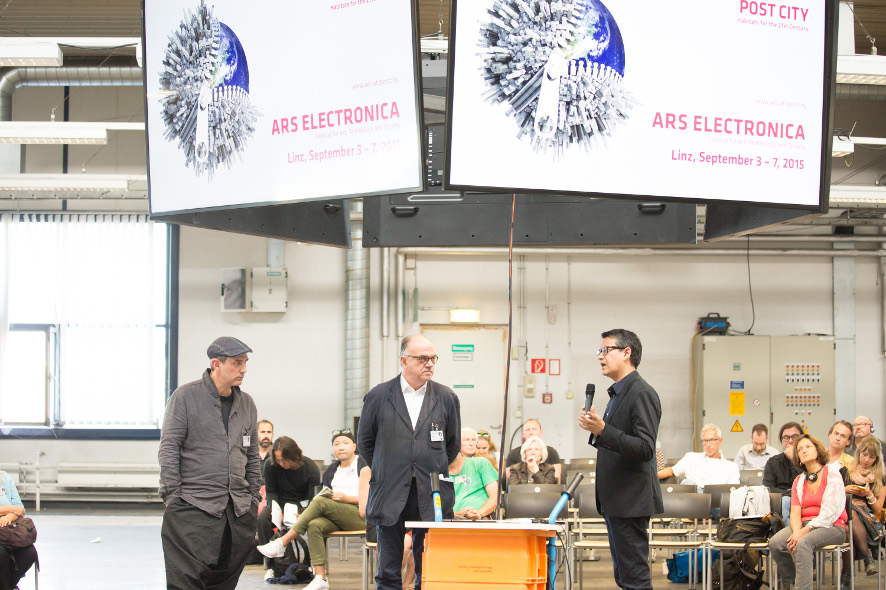 In the Post City Kit Exhibition the Big Robot Mk1 started moving and brought not only children’s eyes light up. The Big Robot Project in the PhD program in Empowerment Informatics, University of Tsukuba, aims to develop the world’s largest robot in which a pilot can ride and move. 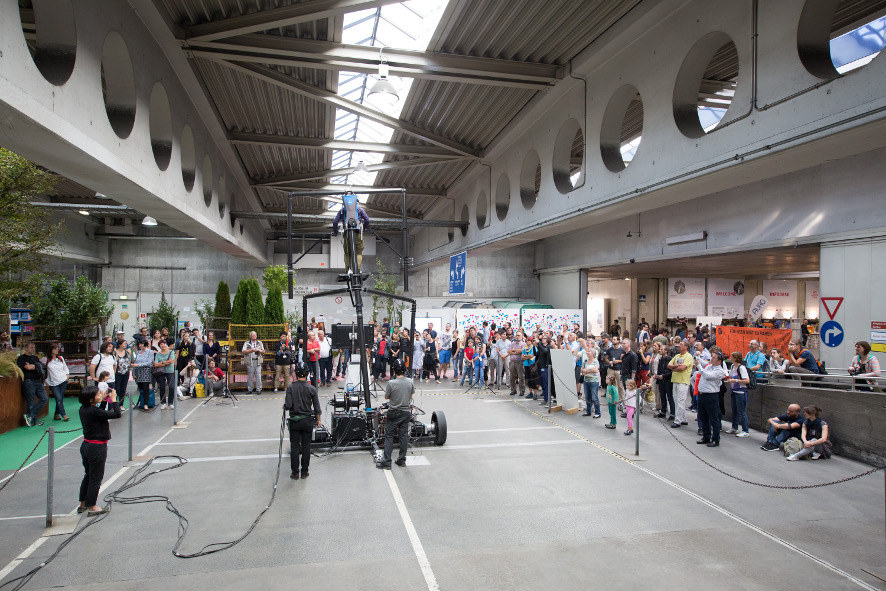 But not only the PostCity is Festival venue. Central, a former cinema in Linz, is a meeting point for all those who are interested in animation since Thursday. Expanded Animation has become an extremely popular feature on the Ars Electronica Animation Festival lineup and a mainstay of the Ars Electronica Festival as a whole! It’s an intensive encounter with ongoing technical and aesthetic developments in the digital animation genre. Today the first Prix Forum took place there with the prizewinners of the category „Computer Animation / Film / VFX“of the Prix Ars Electronica 2015. 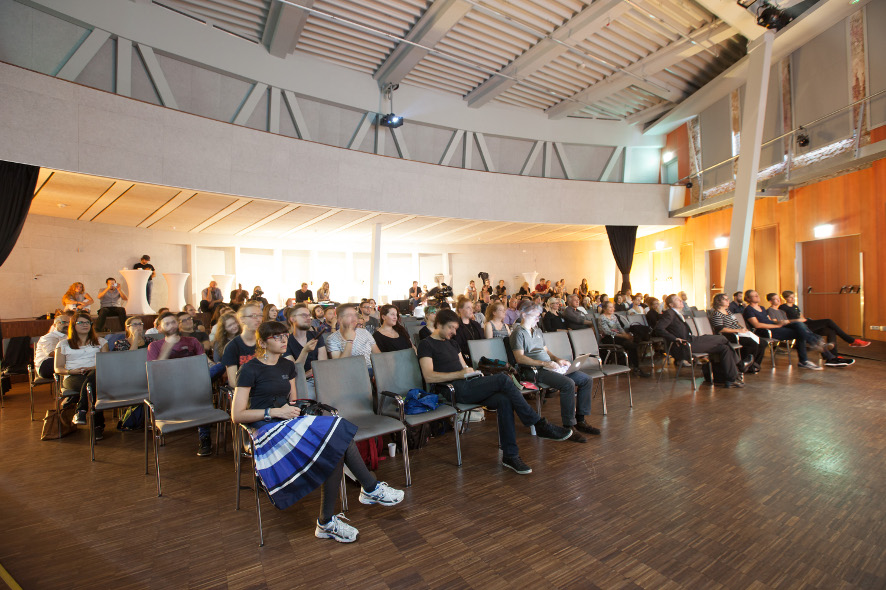 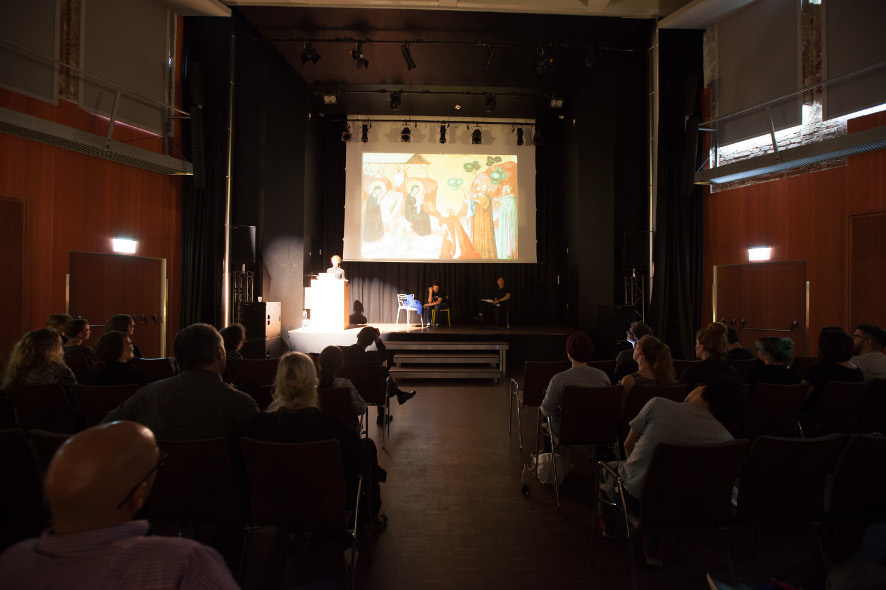 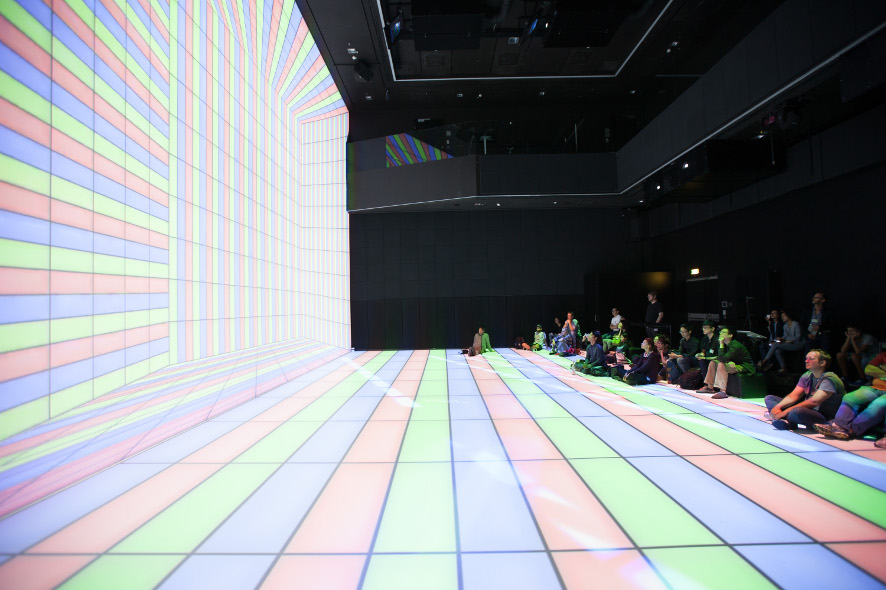 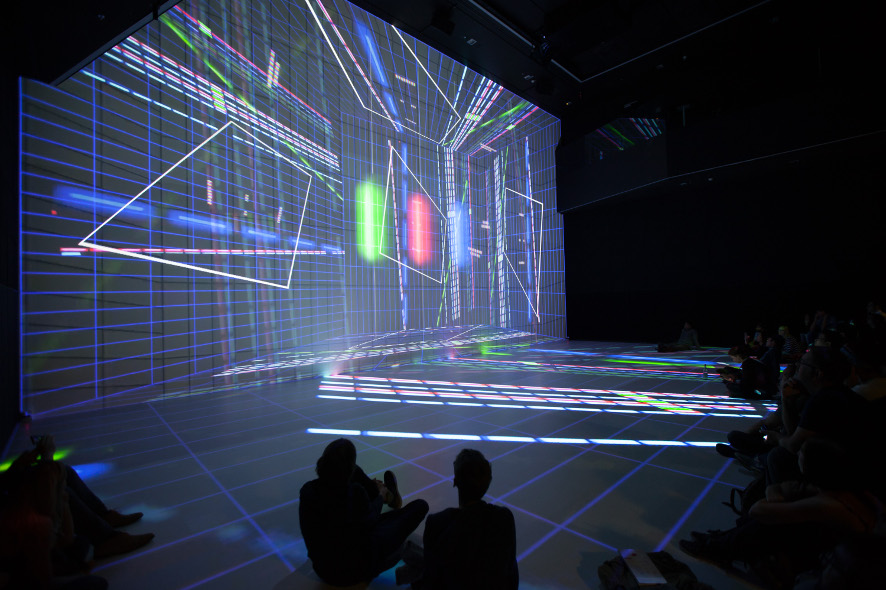 The highlight of the day was the Ars Electronica Gala. While the young artists already received their Prix Ars Electronica 2015 prices in the category u19 – CREATE YOUR WORLD in the morning, the evening spotlighted the international crème de la crème of the digital arts. In the Main Hall of the Brucknerhaus the Golden Nicas were solemnly awarded to this year’s Prix Ars Electronica prizewinners. 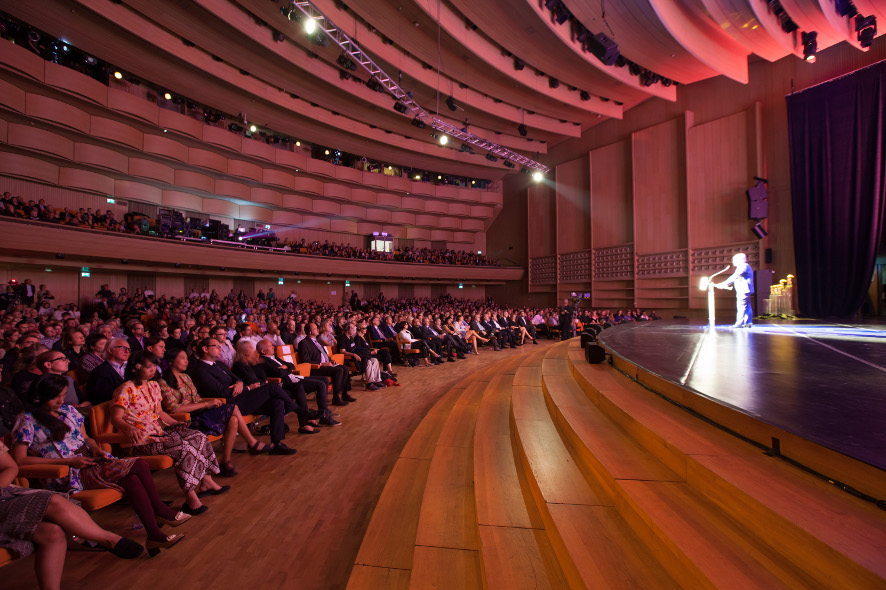 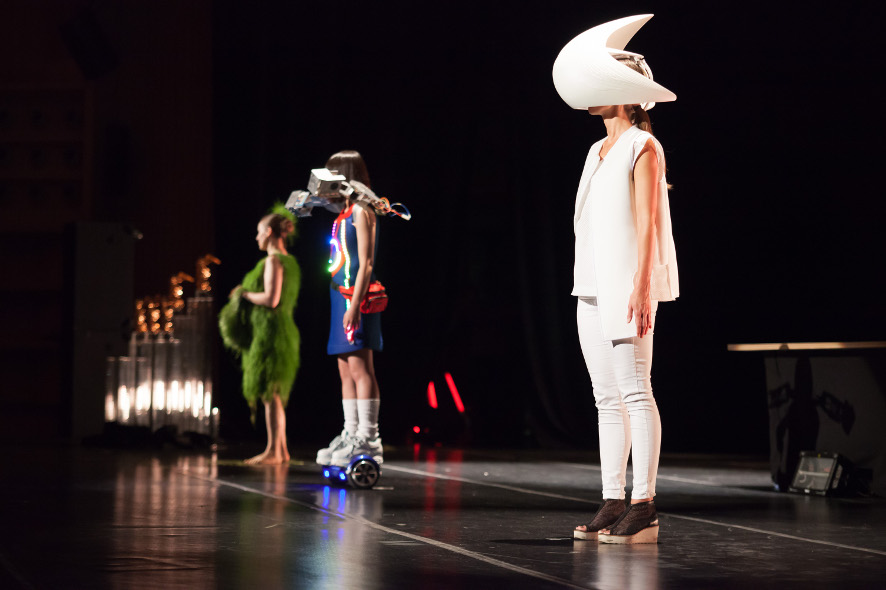 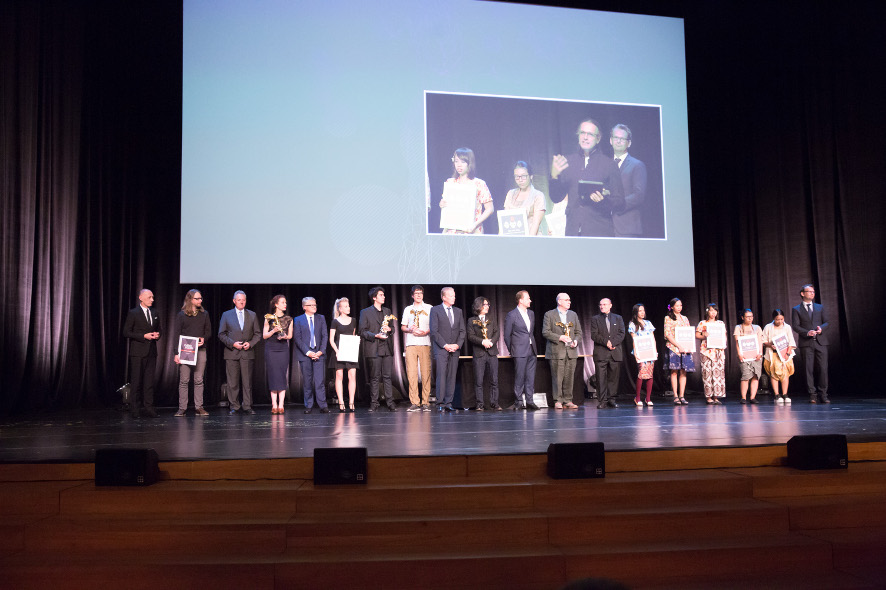