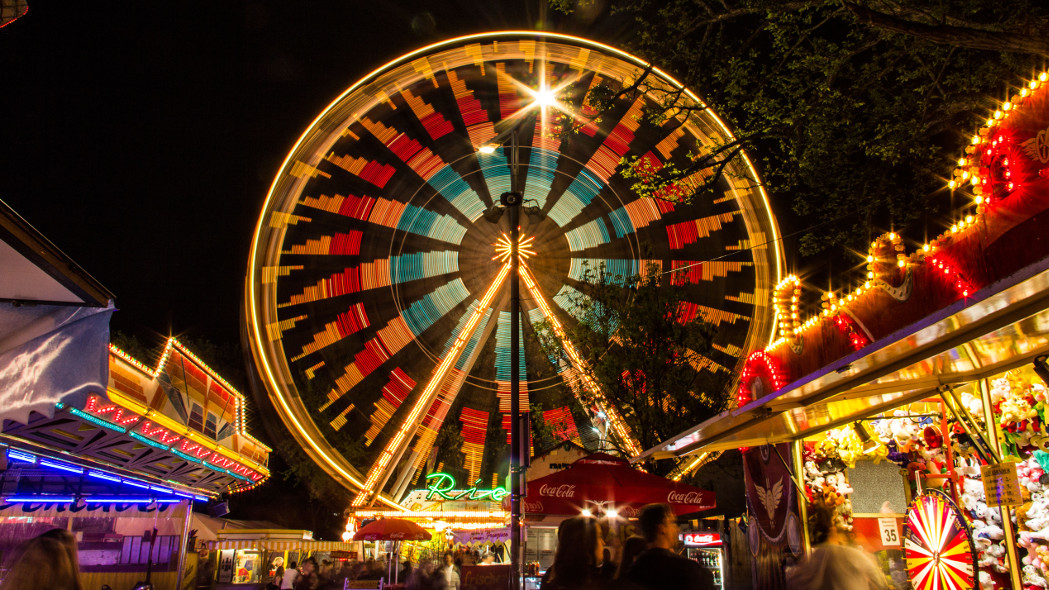 With its colorful mix of carousels, Ferris wheels and fireworks, the carnival held in spring and autumn in Linz’s Urfahr neighborhood draws over a million visitors a year. In his stop-motion video entitled “Urfixed Light Animation,” artist Thomas Schwarz has succeeded in capturing the spirit of this hustle & bustle along with its dazzling lightshow and vehement soundscape, and displaying aspects and elements of this fair that have gone unseen until now. It’s as if the images and sounds blend into an enchanting harmony. Since the opening of the new Deep Space 8K in August this year, visitors of the the Ars Electronica Center can marvel the video on a 16 by 9 meters large wall projection in 8K resolution.

Thomas, your “Urfixed Light Animation” project has garnered a spot in the “Best-Of Presentations” lineup at the AEC’s new Deep Space 8K. So, what’s this video all about?

Thomas Schwarz: This video shows a realm of imagery we’re unable to see with the naked eye. To make it, I used a stop-motion technique and photographs. Stop-motion makes it possible to bring forth a different view of the world, one that can only be seen in a video and can’t be perceived in reality. I mean, anytime someone films something, what you see when you view the film is, in any case, no longer reality. Nevertheless, you can normally go to the locations where a film was shot and behold them as they really are. But that’s impossible in the case of “Urfixed Light Animation” since it depicts a surreal world with a different temporal perception that’s produced not by time-lapse photography but rather by stop-motion exposure. The video raises puzzling questions and prompts people to ask how such a world of imagery could possibly come about. Or to question how you can see something that actually doesn’t even exist. 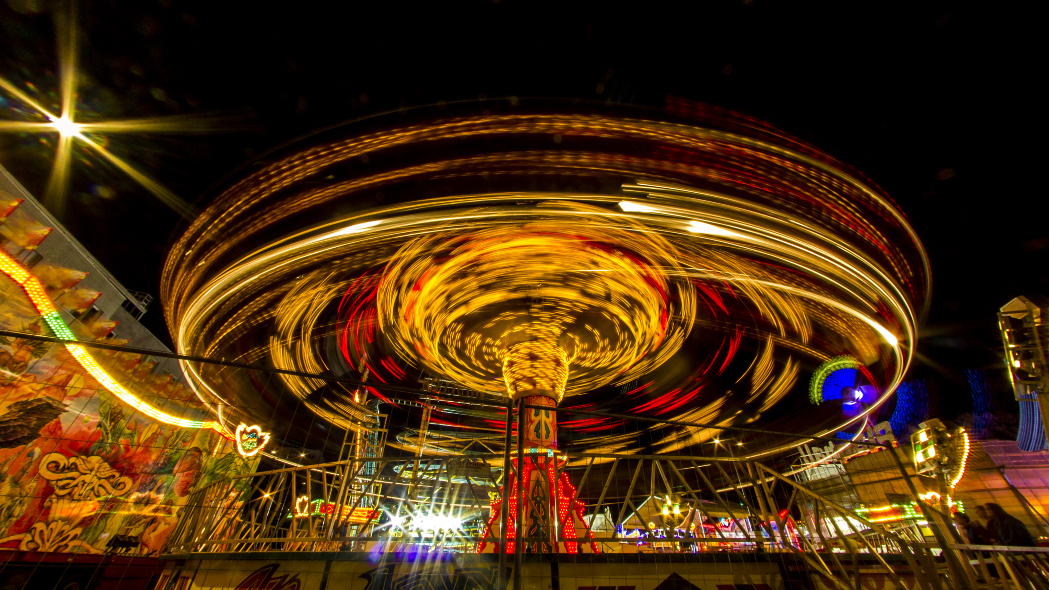 What made you choose the Urfahr Fair as your brilliantly lit film set?

Thomas Schwarz: Actually, a friend of mine from college and I decided to do stop-motion videos and the Urfahr Fair was one of the locations we came up with. That was the inception of this project, and I was so fascinated by the images that came out of this that I kept working on it.

Plus, the Urfahr Fair is such an excellent setting for light painting! Ever since I’ve been active as an artist, I’ve always enjoyed working with light painting. At first, I generated the images myself using moving light sources. Then, I sought out things like a fireworks display that did the movement for me. Shooting over an extended period of time enables me to capture a much more brilliantly illuminated spectacle than I could with real-time photography.

Another reason was that the Urfahr Fair has exerted a strong attraction on me ever since I was a little kid and I always wanted to go there, but my family rarely visited the Urfahr Fair as a group. Then, as I got older and went to the fair, I came to the realization that I didn’t have the least bit of fun there; it was fascinating and attractive only when viewed from afar. My joyful juvenile anticipation was disappointed, as it were. In the video, my intention was to portray the Urfahr Fair in a way that’s more exciting than it is for me in reality, just like in advertisements that are totally exaggerated and depict everything as more beautiful that it is. And that’s exactly what I did, though what I’m actually showing is a “phony” world that isn’t really visible in reality.

Thomas Schwarz: In local slang, the Urfahr Fair is referred to as the Urfix. For me, though, it’s a pretty unattractive place, which is why I wanted to “repair” this carnival with my video. So, for me, it’s sort of been “fixed” (laughs).

How did you produce the video? Or let me put it this way: What was the sequence of technical steps?

Thomas Schwarz: All the principal photography was shot in raw format, which delivers very high quality and depth of color. The first shot had to be adjusted to get all the settings and the exposure time just right. Then, I set the camera to shoot automatically at 10-second intervals, and I photographed for an hour at each location. Then, I processed the individual shots with an image processing program. Some of the images and sequences are looped or played back serially. Finally, I rendered the images into video sequences so that the result is a stop-motion. The very last step was to edit together the video material in an appropriate way. I used very few special effects. The soundtrack took shape later. For me, it was important that the viewers of this video get the feeling that the sounds and noise are produced by the rides and attractions themselves. That’s why I also went with music containing numerous digital elements—in that way, the video and the music could simply blend together better. I worked with one of the cheapest cameras and cheapest lenses that you can find in the amateur field. So this is a low-budget production in that sense.

How many individual shots does the video actually consist of?

Thomas Schwarz: Nearly 6,000 images. In the video work, there are more than 6,000 photos, since I double-used a few photos at certain spots.

What were you actually doing while the camera was busy shooting the photos?

Thomas Schwarz: I was eating nuts and chocolate-covered bananas (laughs). But mostly, I was standing watch to make sure nobody bumped into the tripod. Unfortunately, that did happen once—and the images taken after that point were worthless, and the work was a waste of time. Plus, lots of people approached me and asked what I’m up to, so I was able to strike up conversations with lots of Urfix visitors. 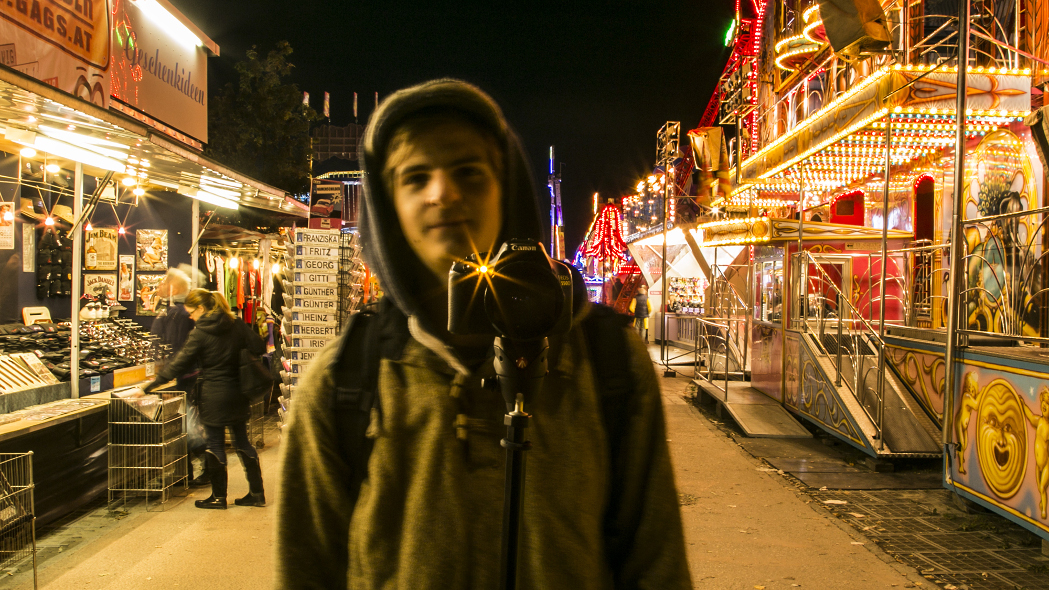 What’s it like for you, screening your project in Deep Space 8K?

Thomas Schwarz: It’s really thrilling for me when the spectators are fascinated by the video and I can see their enthusiasm. I’m especially pleased when they can’t explain how these images were created and then ask how this can even function. Plus, I’ve even heard from spectators that they feel like they’re sort of “drawn into” the video.

What particularly appeals to me about Deep Space is that I can show my video to all kinds of different people and confront them with a high-energy world of music and imagery that they’re completely unaccustomed to. As for me, I perceive my video totally differently when I see it in Deep Space. One problem with the editing process is that you incessantly focus on the same elements. I can work on a project for months, and I always look at the same things. So, many of the details in my video don’t really strike me until I see them in a large-format display in Deep Space. There’s so much information in an image; nevertheless, viewers are always preoccupied by the hectic play of light. The fact that there are also a lot of things happening on the periphery is something I didn’t really appreciate until the presentation in Deep Space.

What surprised you about how the design of this video turned out?

Thomas Schwarz: When I was shooting the images, I already had a picture in my head of how this could possibly look when I use a long-term exposure. All I could do was to use my imagination, and then this preliminary image was either retrospectively confirmed or I was completely surprised because it turned out totally differently than I had imagined. The project itself took a very long time to bring to fruition—about 1½ years from the first exposure to final completion. I worked intensively at two fairs. The editing took approximately three months. 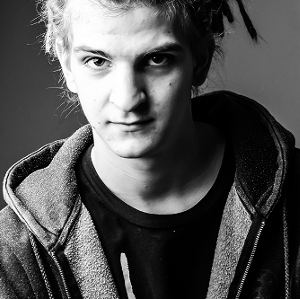 Thomas Schwarz studies Time-based and Interactive Media at Linz Art University. He now works part-time as an Infotrainer at the Ars Electronica Center. In his artistic work, he uses photography and film, 3-D printing, music, light painting and interactive installations. With time-lapse and stop-motion techniques, Thomas Schwarz endeavors to capture a wide array of processes and mechanisms that are hardly apparent in reality, to adapt this material in unconventional ways and thereby to develop surreal worlds of imagery.