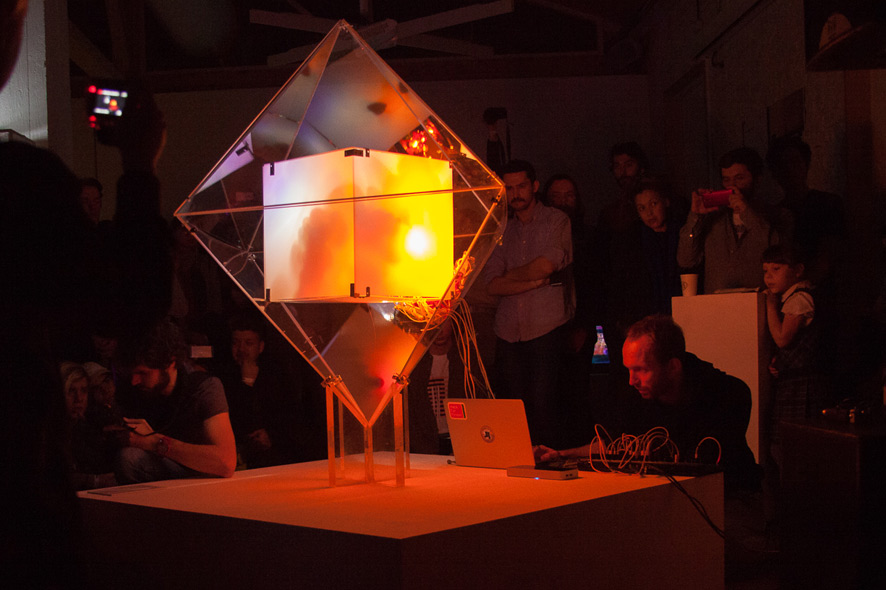 USSR 1964. Nikita Khrushchev’s last days as party and government chief in Moscow are numbered. Meanwhile, in Kazan, a large city lying 800 kilometers eastwards, the 24-year-old media artist Bulat Galeev designs a light organ of a special kind. More than 50 years later, “Crystall” was brought back to life by Natalia Fuchs and her team. In the course of the Polytech.Science.Art Week, which took place in Moscow in December 2015 at the Polytechnical Museum, this audio-visual musical instrument was presented again. Manuela Naveau of Ars Electronica Export spoke with the curator Natalia Fuchs about “Crystall” and the influence of Bulat Galeev and thereby also got an insight into the Polytech.Science.Art Week, dedicated to interdisciplinary collaboration between art, science and technologies with workshops, discussions, lectures, audio-visual performances and a final exhibition. 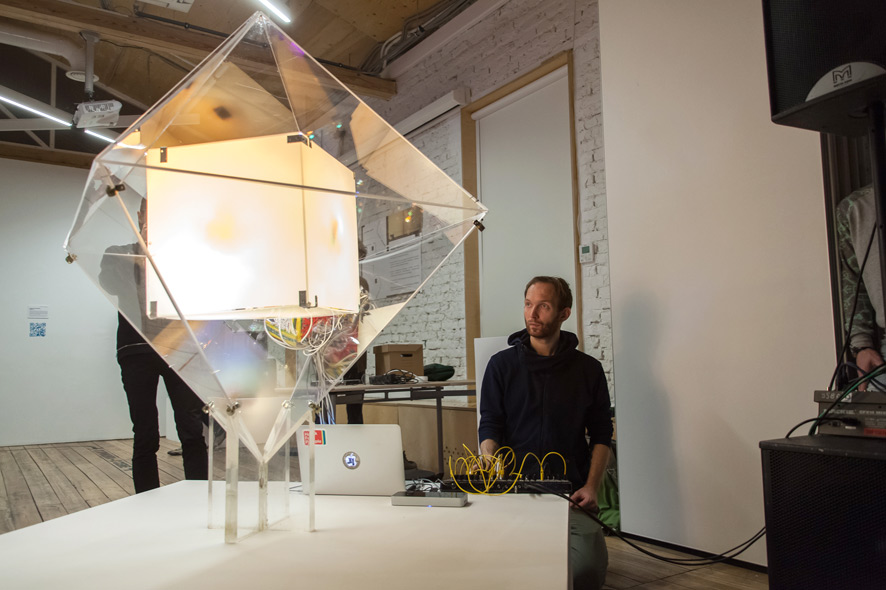 Together with the Prometheus bureau that was founded by Bulat Galeev you’ve presented the light organ at the Polytech.Science.Art Week…

Natalia Fuchs: Yes, the machine has a beautiful name – Crystall. It was built up in 1964 by Bulat Galeev and some other Russian engineers at the Prometheus bureau in the city Kazan and shown at the exhibition centre VDNKh in 1966 where the Polytechnic Museum is located now. At that time Prometheus was one of the leading audio-visual research centres in Russia and the Crystall was not the only one light organ created at that time in Russia. After meeting Anastasia Maksimova from Prometheus in early 2015, I became interested in their archives.

“Because I’m enjoying media archaeological research a lot, I quickly went deep into the thoughts of reconstruction of one of the machines.” Natalia Fuchs

Did you have documents or a construction plans?

Natalia Fuchs: The Crystall mostly disappeared, we didn’t have schematics, only parts of the old machine and one original picture, but after talking to artists I decided that we can try it out. I’ve invited ::vtol::, a Russian media artist, the first batch producer of music and video synthesizers in the post-Soviet area – who also received an honorary mention by 2015 Prix Ars Electronica – and Peter Kirn, Berlin-based audio-visual artist and composer, founder of Create Digital Media, to lead the machine and performance reconstruction. We had a five-day workshop called “Synaesthetic machines” on synaesthesia, media archaeology and light and sound technology comparative approaches together with them and my friend and co-curator Alexey Shcherbina. It took some more months after the workshop to figure out how do we finish reconstruction and how do we present it in the Polytech.Science.Art Week. 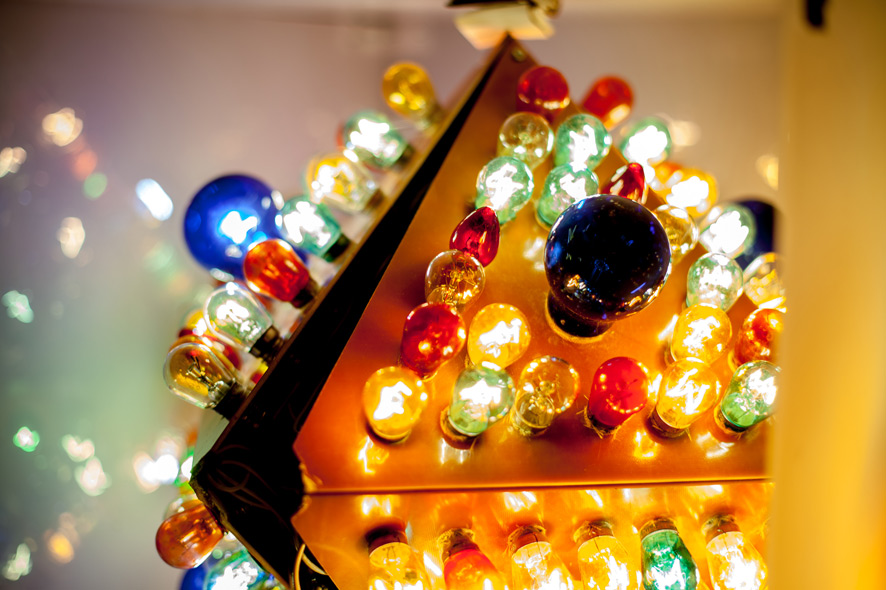 How does the copy differs from the original?

Natalia Fuchs: Now, the machine does not have the same controlling system as it was in the 1960s of course, we use digital technology, but the machine itself is analogue, even all the lamps inside are coloured manually following all the process of producing the machine in 1964. Luckily we had engineers from elder generation at the Prometheus around us for consultancy. In the project also young artists participated. For all of us the “Crystall. Reconstruction” project is not over – we are going to make the machine portable and on January 27, 2016, we have the first performance with a portable Crystall in Kazan, in the town where the machine was originally created.

Why did you thought this artwork by Bulat Galeev is an important element of the Polytech.Science.Art week?

Natalia Fuchs: Bulat Galeev was a pioneer of light music in Russia, an avant-garde artist and the enlightener in terms of technology and science. Galeev’s research in light architecture, lighting design, abstract cinema, video, laser and computer art, and electronic and spatial music, the theatrical sound and light performances and scenography are crucial for Russian media art scene.

It’s a treasure of Soviet history. Galeev as truly interdisciplinary artist, engineer and researcher summarized all the traditional and experimental forms of arts into the original “periodic system of the arts” in relation to the technology and science. And this is exactly what is important for us for representing a new stage of interdisciplinary revival in Russia.

While curating the Polytech.Science.Art program for the Polytechnic Museum I am digging into the history of digital and media art scene in Russia, develop international connections, participate in experiments specifying “white spots”. By presenting “Crystall. Reconstruction” at the Polytech.Science.Art Week it was important for me to show this kind of interdisciplinary approach in art, technology and science as complex approach affecting huge variety layers of communications of different generations and different cultures and influencing us building the future. 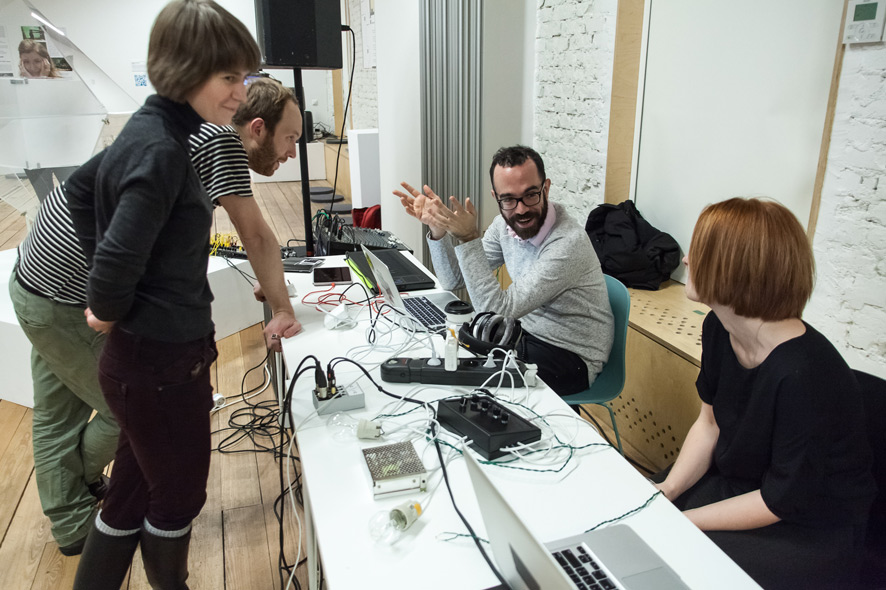 What were your personal highlights of the 2015 Polytech.Science.Art Week?

Natalia Fuchs: One of the key events was a series of dialogs dedicated to ethics problems in modern science and technology art. Joanna Zylinska, artist, writer, curator and professor of New Media and Communications department at Goldsmiths University of London participated as well as my colleague Dmitry Bulatov – he is one of the leading researchers of art and science in Russia. I’ve invited several researchers and artists to stay in dialogues in public and it was a success. We will develop this project into international conference dedicated to the problems of ethics in contemporary science and technology development in 2016.

We presented the premiere of the “Self-organization” performance about oil – the project started in summer 2015 as an initiative of the artist Olga Kiseleva who is also professor and head of the Art and Science Department at the Sorbonne University. Every night Polytech.Science.Art Week had an audiovisual performance as the final happening – I worked both with debutants, young artists and famous electronic musicians. The visualization of the music performances was designed by the Russian video artists Alexandra Gavrilova (Stain) and Ekaterina Dmitrieva directly during Polytech.Science.Art Week. They even had a chance to have a working session with Julien Vulliet, one of the programmers of vvvv platform. 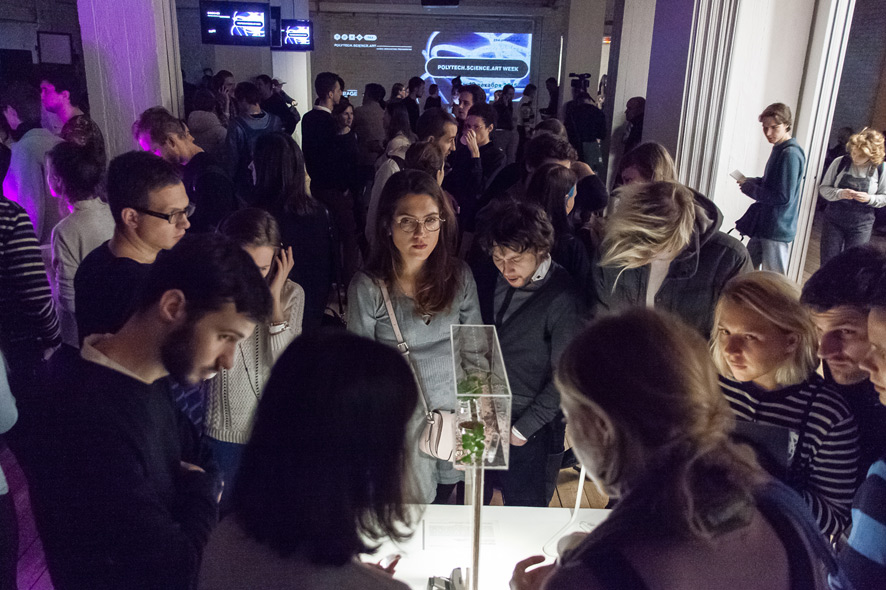 “Artists as catalysts” is the main working title of our exhibition project that Polytech Museum is developing together with Ars Electronica for 2016. Can you tell us more why this catalytic approach in general is interesting for Polytechnic Museum to work on in future?

Natalia Fuchs: In the Russia of the 1960s/1970s despite having “an iron curtain” at some point, scientific laboratories had mostly full access to all the information and advanced technologies to research. Therefore avant-garde artistic communities were historically attached in Russia to the connections to scientists and technology developers. The Polytechnic Museum in Moscow was such a place for interdisciplinary communication since 1872. It’s always been the place for the popularization of science and technology with strong humanitarian background and relation to social sciences.

Artists were seen as catalysts by the Polytechnic Museum in Russia since always, for instance Polytechnic Museum was important for Russian Futurists movement – the first lecture by Marientti “About Futurism” in Moscow was held here on January 27, 1914, such as many other meetings and events around it. So the importance of catalytic approach was recognized by the Museum long time ago, but at the moment, after having some mute in the 1990-2000s, we are again following the modernization course of one of the oldest and biggest science and technics museums in the world. 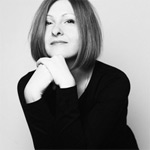 Natalia Fuchs is an expert in art and culture management and international public relations. She is a graduate of the University of Manchester, UK (Cultural Management, 2008) and Leonardo scholarship winner at the History of Media Arts program of Donau-Universität (low-residence, Austria). In 2013 she was invited by the Polytechnic Museum in Moscow to create and curate interdisciplinary program Polytech.Science.Art what she is doing currently, together with curating exhibitions and Electronic Livingroom, experimental multifunctional space at the Polytechnic Museum. As a researcher and practitioner, she works in a variety of topics and participate different international projects focused on contemporary culture, media art, cinema and sound.