Light Painting – As If Rendered by a Robot 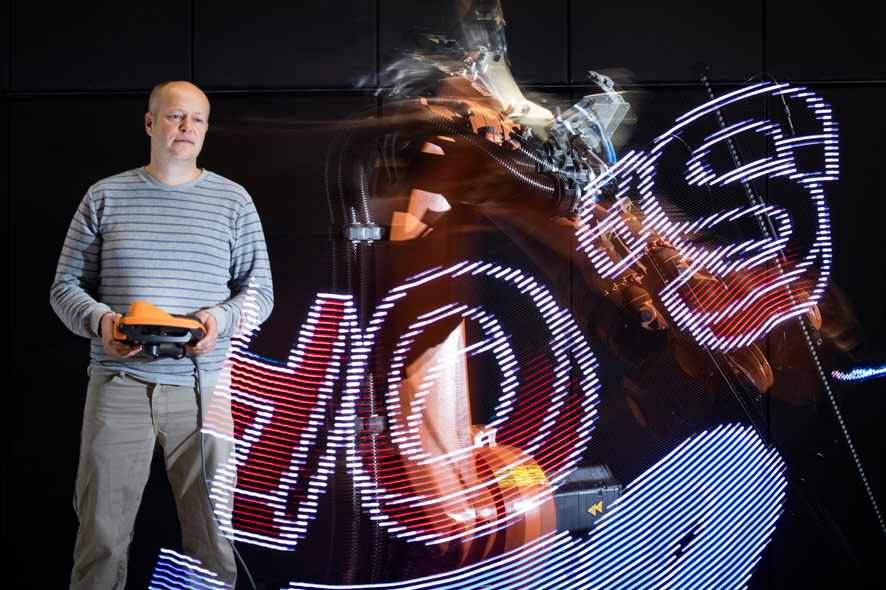 A darkened room, a camera set to an exposure time of several seconds, a movable light source and a fair amount of delight in experimentation are the basic ingredients that go into Light Painting. Last autumn, artist Chris Noelle imparted the fundamentals of this photographic genre to workshop participants assembled on the boxcar loading dock in PostCity, the 2015 Ars Electronica Festival venue. Since then, he’s teamed up with Johannes Braumann of Linz Art University’s Robot Lab to program the school’s KUKA KR16 industrial robot to conjure up figures and forms drawn with airborne light.

In the new Creative Robotics exhibition that premieres on February 3, 2016 at 6:30 PM in the Ars Electronica Center, you can behold these brilliant images. In this interview, Chris Noelle, who’s already been working in the light painting genre for 12 years now, explains how he prepared for the show and how newcomers can best go about experimenting with this form of photography, the art of writing with light.

What sort of allure does this time-exposure photographic technique have for you?

Chris Noelle: Light painting is so interesting for me because I can experiment with it in so many different ways without it ever becoming a boring routine. The interplay of light and shadow can be applied in such a broad spectrum of stylistic directions, and it creates a mix of illusion and reality—a hands-on, malleable form of virtual reality, you might say. What fascinates me most of all about light painting is the diversity of possibilities. It’s a technique I can use to realize extraordinary new concepts beyond the realm of the computer.

You’ve been doing light painting for 12 years now. How did you come to use an industrial robot in conjunction with this?

Chris Noelle: The artistic aspect of working with robotic technology had long been on my wish list. Then, at last year’s Ars Electronica Festival at PostCity, I visited the robot installations on the boxcar loading dock and I was fascinated by their precision and stoic sequences of movements. On site, I got to talking with Johannes Braumann who supervised the exhibition. And since he’s a guest professor at Linz Art University in charge of the school’s Robot Lab this year, we got together a few weeks later and began the first photo tests, the results of which really blew me away! Since then, we’ve been meeting regularly in the Lab to explore the various ways of utilizing this technology. 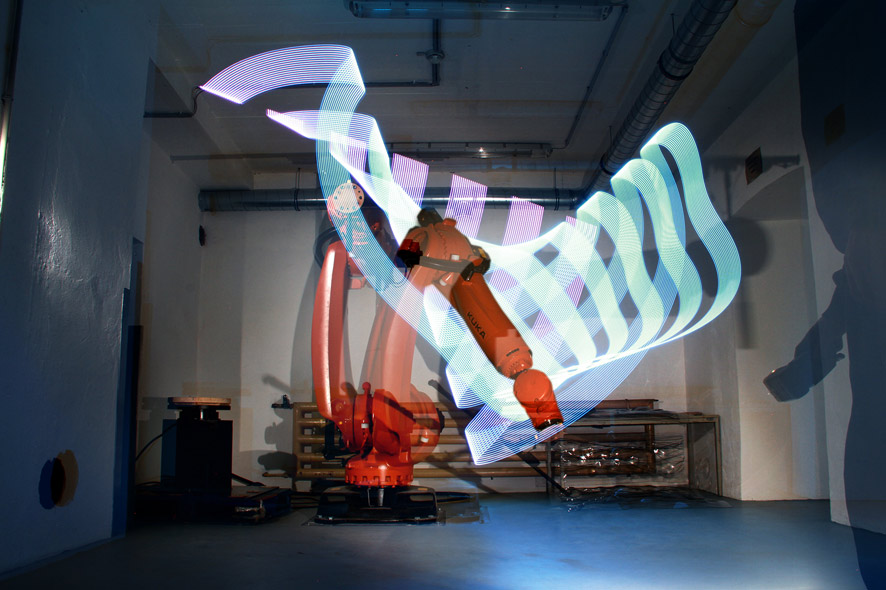 What sort of preparations did you do for this project in which the KUKA KR16 comes into play?

Chris Noelle: For the first series of tests, we had installed the Pixelstick on the Robot Lab’s big KUKA robot arm. That’s a rod equipped with 200 LEDs that can play back images like a scanner. But since this robot is fixed in place and thus stationary, we switched to KUKA’s smaller mobile KR16 robot, halved the Pixelstick down to 100 LEDs and slightly modified it so that it can be hooked up to the robot’s electronics and controlled by them.

Johannes Braumann then programmed the sequence of motions and I developed the graphics and handled the light painting hardware & software solutions that generate real-time animation from the played-back graphics. To make this happen, I commissioned my Dutch associate Gerrald van der Kolk to program a Max Patch that uses a sort of feedback effect in the live video to transform the individual lines of light into time-exposure images. From the robot, I shot a film of the animation sequence, which enabled me to subsequently determine the speed at which the images are played back and the length of the individual graphic segments. 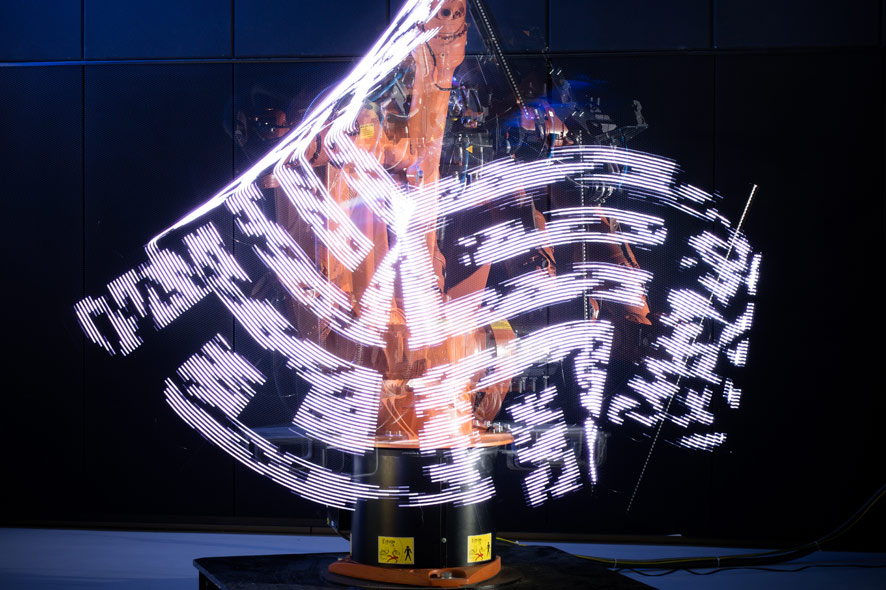 What type of control do you use? And can you tell us which light paintings you’ll be exhibiting in “Creative Robotics”?

Chris Noelle: The KUKA KR16 runs, as an endless loop, a series of movements (or a choreography) defined in the Grasshopper programming language and, in doing so, repeatedly triggers the playback of the picture files on the Pixelstick. The image itself is 3,000×100 pixels in size and contains various visual and graphic elements such the Ars Electronica logo morphing into a swarm of birds, a free-standing 3-D cube, a DNA helix and typographic material.

What’s interesting here is the graphic rethinking process—that is, the development of simple graphic elements on the computer in combination with the sequence of movements of the robotic arm. For instance, a DNA helix results from the swiveling of the KUKA KR16 and the 2-D graphics of a common, everyday stepladder. Due to the brief duration of the test phase, we decided that the installation ought to concentrate on the basic production of simple worlds of imagery. After all, there’s still a lot of potential for development here when 3-D camera tracking shots are precisely coordinated with the sequences of the robot’s control system. This will all come about over the years because what this definitely takes is additional time for extensive experimentation. 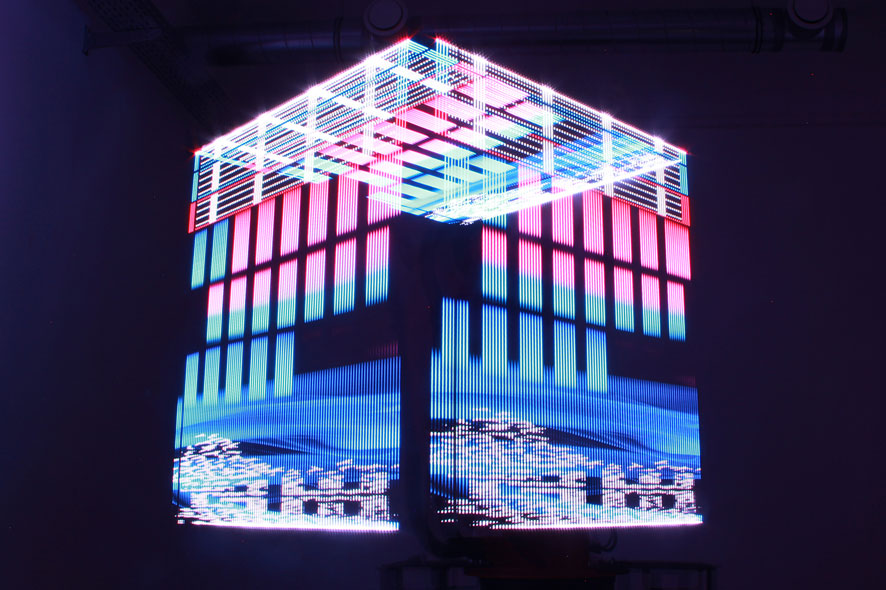 A flash light, the screen of a smartphone or even your own customized Pixelstick—a wide array of light sources can be employed in light painting. How do you get started in this genre?

Chris Noelle: Anyone who’d like to shoot their own light painting photos should first acquire a tripod and a camera that lets you set the exposure time yourself—that is, from 2 to 30 seconds in manual mode and, ideally, with a bulb mode as well. And if you don’t have one of your own, then the simplest thing to do is borrow one from an acquaintance and then you can immediately get started experimenting. The beautiful thing about light painting is that a group of several people can do it together. 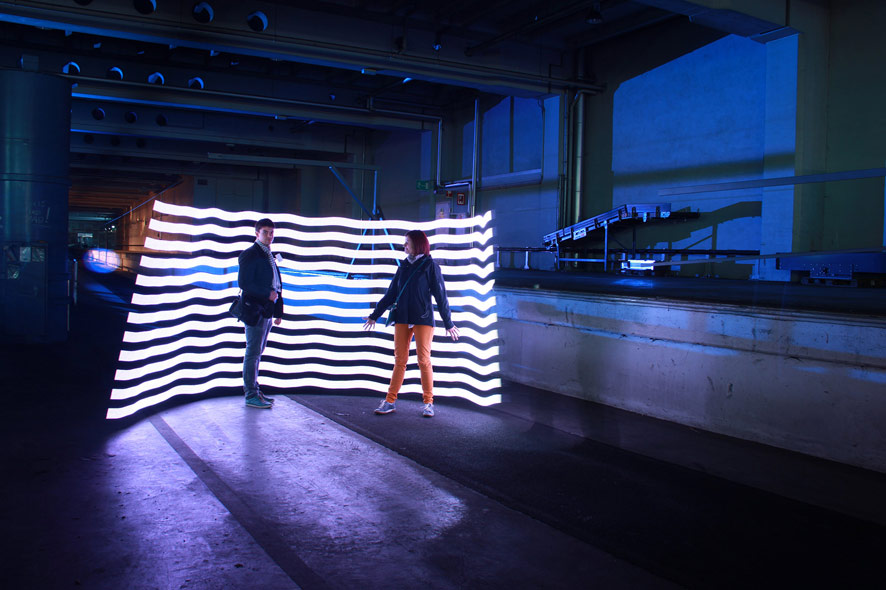 Generally speaking, you can do light painting with any light source—for instance, a flashlight, a sparkler, LEDs or an iPad—that’s illuminated before the camera in a dark room. For example, I take my shots with an exposure time of 15-30 seconds, using a tripod and a remote shutter release, an f5.6 aperture and ISO 100 in order to reduce color noise to a minimum and to achieve a background that’s as dark black as possible. The first thing you have to do, when the space is brightly lit, is to focus on a hotspot and then turn off the autofocus. Now, anything that’s illuminated or that moves in front of the camera leaves behind traces in the picture. If you’re shooting with a DSLR camera, you can look at the results right after the exposure. For advanced photographers, the RAW mode is interesting too, because it lets you modify the photos on the computer in the postproduction phase.

Needles to say, it also pays to gather information online. There are several websites providing material that goes into this more deeply. On Youtube or Vimeo, simply enter “light painting tutorials” into the search box and you’ll get all the how-to videos you need. The website of the Light Painting World Alliance LPWA for short, the “headquarters” of the international light painting scene, is a marvelous source of inspiration to be sure. You can search this site in terms of, say, countries, locations or artists and check out individuals’ portfolios. Or go to Flickr, where there are several interesting groups—”The Art of Lightpainting“, for instance—that are dedicated to the subject of light painting and offer lots of inspiration.

You can also find very rewarding tutorials at lightpaintingphotography.com, lightpainting.sunnys.photos and lightwriting.de. And then there are several interesting online shops where you can purchase special light painting equipment—for instance, herramientaslightpainting.com, lightpaintingbrushes.com and thepixelstick.com. And for anyone who’s interested in making their own light painting/LED tools, Adafruit is the place to go for all sorts of DIY instruction manuals. Have fun browsing around!

Please note: The exhibition „Creative Robotics“ will be opened on WED February 3, 2016, 6:30 PM, at the Ars Electronica Center Linz with a Light Painting performance in the Deep Space. Admission the the opening is free!