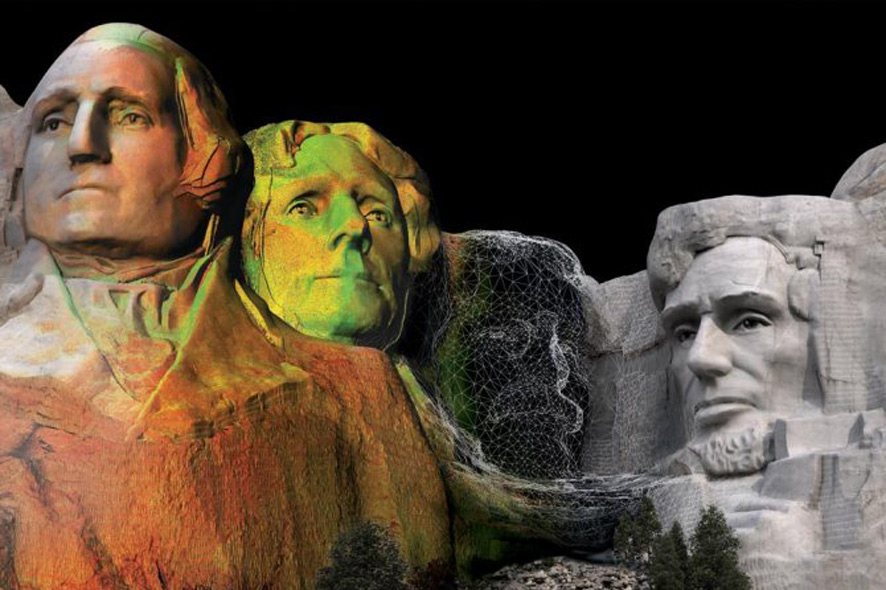 Everybody’s talking about enjoying virtual reality at home now. If we can believe the latest buzz in the consumer electronics field, then many of us will be wearing (VR) glasses in the very near future. At South by Southwest (SXSW) in Austin, one of the largest festivals showcasing digital creativity in the form of music, film and interactive media, virtual reality took the spotlight in a high-profile setting—a panel discussion in which representatives of the international non-profit organization CyArk, Seagate and Ars Electronica talked about the (three-dimensional) galleries of the future, and elaborated on Deep Space 8K at the Ars Electronica Center in Linz in conjunction with accounts of experiencing 3-D content in the Museum of the Future.

Thanks to the active commitment by CyArk, an organization that uses technologies such as 3-D laser scanning to digitize works of art and architecture, visitors to Deep Space 8K can behold precious cultural treasures from throughout the world in 3-D and to go on virtual walking tours through some of humankind’s most important cultural heritage sites. We asked CyArk Vice President Elizabeth Lee to tell us more about that international non-profit organization and its work.

“Building the Galleries of the Future” was the title of the talk at SXSW 2016 in Austin. How could theses galleries look like in your opinion?

Elizabeth Lee: As museums continue to change and grow in the 21st century, CyArk sees itself as part of this integral shift in the sharing and experiencing of online and onsite digital content. CyArk builds resources for open data and digital visualizations that can serve as a useful tool for conservators, scholars, and community members in the future. Along with our museum partners, we build integrated environments that empower creative minds to test ideas.

Future galleries in cultural heritage spaces will be a combination of physical and digital. CyArk’s aim is not just to serve as a repository of cultural heritage site data, but to allow for contemporary communities to access data and bring heritage to life in the classroom, online, and onsite thereby transcending the experience of the object or collection alone.

The beauty of 3D data is that we are not limited to one application—only by our imagination and current consumer technologies. We are often able to revisit data from projects captured over a decade ago and re-develop it using new tools to visualize the data in new ways—3D printing for example has become almost mainstream in the past few years, where, when CyArk began, it was incredibly niche. We imagine that the same will be true of virtual and augmented reality as it enters the commercial realm.

CyArk envisions the galleries of the future adopting a model similar to Ars Electronica Center in which existing technologies and assets are interrogated, researched, and developed for new and better uses. In some cases, this may be physically recreating an object within a collection—enabling visitors to interact with objects onsite as never before and engage different senses in the experience. In other cases, it may be recreating it virtually so that those who do not have the opportunity to travel to the physical gallery can experience the objects in their current physical context. 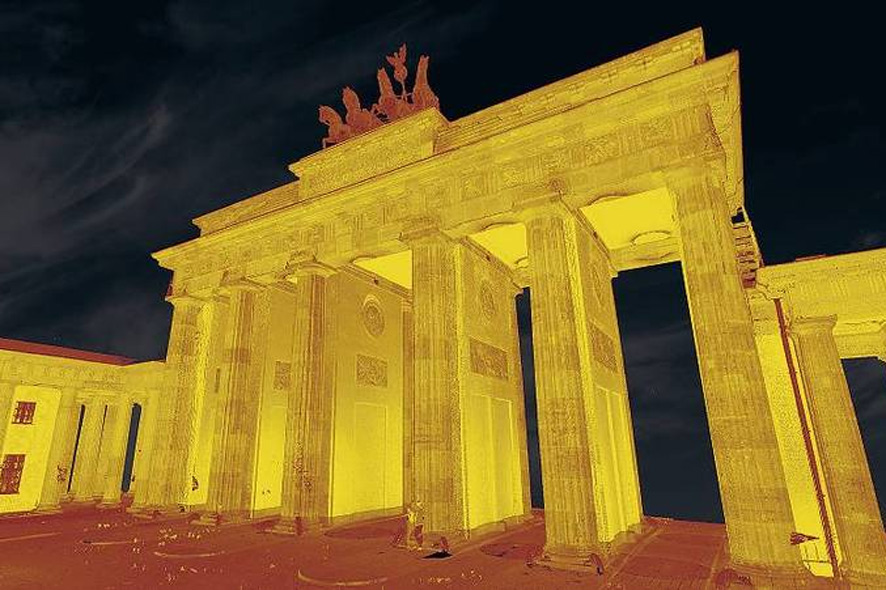 The Brandenburg Gate in Berlin, scanned by CyArk. Credit: CyArk

How long does it take to scan an object like the Brandenburg Gate?

Elizabeth Lee: The amount of time required to capture any site will depend on the overall size, level of intricacy and the final products we wish to create. The Brandenburg Gate for example was scanned in about 40 total hours and processed over about 40 hours further, while a project like Mount Rushmore here in the United States took three teams some 2 weeks to scan and months to process. We generally estimate that processing will take about twice the time spent in the field.

And what technical equipment is needed on-site?

Since the foundation of CyArk in 2003 the technology of 3D scanning has evolved rapidly – are you planning to re-visit sites with new technologies again – like UAVs or laser-technology that allows to capture more details?

Elizabeth Lee: It is true that the technology has developed rapidly since CyArk’s founding. Where a 3D Scanner might collect 10,000 points per second in 2003, today, they exceed one million points per second. This, of course, greatly impacts the total volume of data that CyArk now collects for any given project, however, our methods have not changed. Regardless of the year, CyArk strives to capture data in excess of what contemporary consumer technologies can support. For example, no commercial virtual reality platform can support anywhere near the amount of data needed to render even our oldest project in real time. While we would love to return to many of these sites, the data that we currently have archived is capable of reconstructing a site in the event of a catastrophe. Rescanning would allow us to add another dimension (a fourth dimension, time) to our existing data sets and track change of a site over time.

Of course, CyArk is leveraging these new technologies to improve our digital preservation process and methodologies for future data capture, as well as exploring all of the wonderful virtual access tools and platforms that now exist which were unavailable back in 2003. Rather than dedicating resources to rescanning, we chose to direct them to providing greater access to the incredible wealth of sites already in our archive.

What are the current projects of CyArk and what are their challenges?

Elizabeth Lee: CyArk’s major initiative is the CyArk 500 Challenge which was founded in 2013 with the goal of digitally preserving 500 sites over 5 years through CyArk’s robust network of partners. To date, we have completed about 20% of our goal of 500 sites and are seeking further partners to support data collection, archiving and processing.

With the dramatic and highly publicized rise in intentional heritage destruction in the Middle East, we have developed a strategic focus around the region we are calling Project Anqa (Arabic for phoenix, the bird that rises from the ashes). The program was formed last year in collaboration with the International Council on Monuments and Sites (ICOMOS) with the goal of digitally preserving at-risk heritage sites in Iraq and Syria on the fringes of, but not within, active conflict zones, lest they too become a target. In this program, our challenges range from determining the current extent of destruction to ensuring the safety of our teams to how to provide technical hardware to those on the front lines. We are working with partners such as ICOMOS, Yale University and UNESCO’s Emergency Safeguarding of Syrian Cultural Heritage Project and have seen great results to date. Now, we need to scale the program and begin to extract data much more quickly and from many more sites.

How do you decide which world cultural heritage site will be digitized next?

Elizabeth Lee: We at CyArk look closely at a range of factors including the site’s status, its significance, the myriad of risks it faces and how digital preservation will positively impact the site. CyArk is fortunate to have an Advisory Council made up of leaders in the Heritage field who bring a diversity of expertise– nonprofit, academic and government. The Council offers suggestion as to what sites should be included within the CyArk 500 Challenge, based on culture, geography, age etc. thereby guiding our documentation work. CyArk strives to build an archive that is reflective of all cultures and works to ensure that we are proactively seeking sites which are at the greatest risk and the most in need of digital preservation.

Elizabeth Lee serves as Vice President for CyArk, an international non-profit organization with the mission to capture, archive and enable virtual access to the world’s cultural heritage. Her expertise includes developing international partnerships in support of technology driven solutions for cultural heritage protection, education, and tourism. Originally trained as an archaeologist with excavation experience in Turkey and Hungary, Elizabeth has been applying 3D reality capture technologies to the cultural field for over a decade. She has completed over 100 projects working with dozens of cultural ministries, the United Nationals Educational Cultural and Scientific Organization (UNESCO), and top technology companies including Microsoft, Autodesk, Seagate, and Iron Mountain.