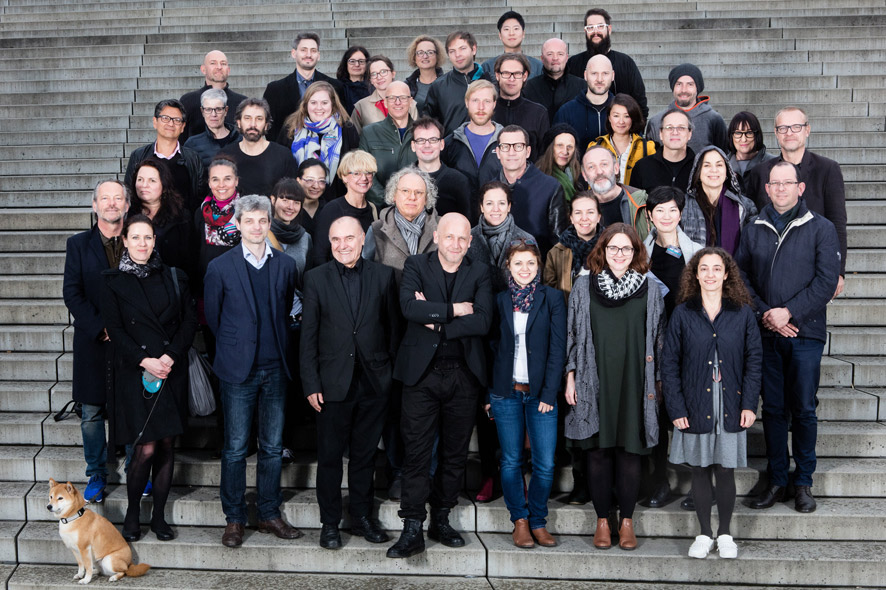 Crowning the crème de la crème of contemporary media art—like every year since 1987, jurors from throughout the world once again gathered in Linz to select the prizewinners of the Prix Ars Electronica, the world’s most time-honored competition in the media arts. This is by no means a walk in the park. The task at hand for the five jurors in each of this year’s four categories was to evaluate thousands of projects submitted for prize consideration from 88 countries, and to do it in only four days: April 7-10, 2016. Each juror had already gotten acquainted with the individual entries in his/her respective category prior to the in-person deliberations; nevertheless, it was the time factor that dominated the initial group sessions in Linz.

In a previous blog posting, we already introduced the juries’ dramatis personae in the four categories: Computer Animation / Film / VFX, Interactive Art+, Digital Communities and u19 – CREATE YOUR WORLD. On this long—and thankfully rainy—weekend, each jury was assigned its own room in the Ars Electronica Center, and space was also made available in the adjacent Ars Electronica Futurelab, where verdicts could be reached in seclusion. But we managed to quietly open a few doors, ease our way inside and unobtrusively lurk on the periphery to capture the mood of the decision-making process. 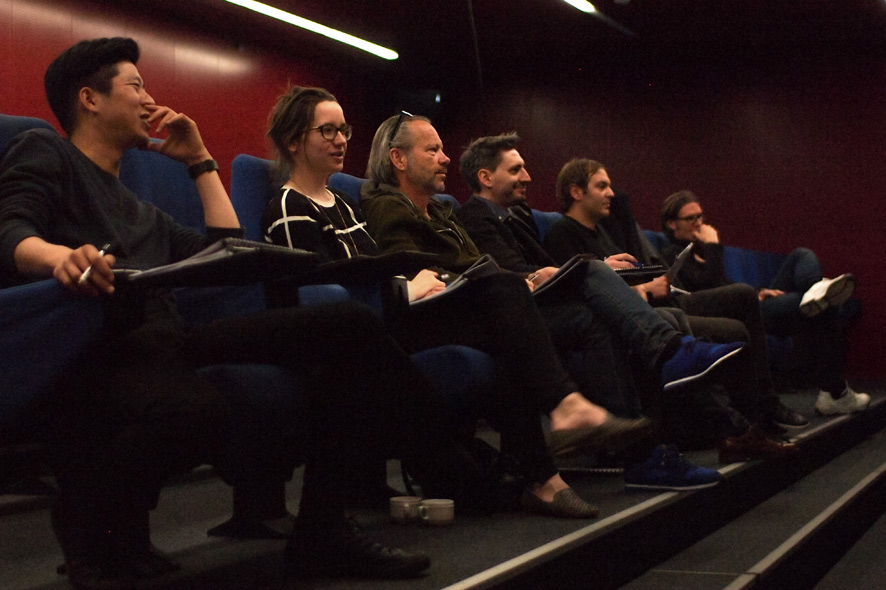 The submitted animations were rated in the seminar room of the Ars Electronica Center. Credit: Martin Hieslmair

Our initial foray took us inside the Ars Electronica Center. Directly beneath Deep Space 8K, the jurors of the Prix’s category of longest standing, Computer Animation / Film / VFX, were gathered in a seminar hall. This is a screening room with an extraordinary atmosphere, and only those with a special admission ticket can settle into one of the theater-type seats in this darkened space to enjoy an extended lineup of state-of-the-art motion pictures. (Others will just have to wait for the Ars Electronica Animation Festival that premieres September 8th in Linz in conjunction with the Ars Electronica Festival.) Since the composition of the jury is new every year and Ars Electronica doesn’t specify how they’re to go about determining this year’s Golden Nica winner, the jury always needs a little time at first to get acquainted and establish a sequence of steps. And this time around, the right approach assumed particular importance, seeing as how the number of submissions in this category in 2016 set a new “box-office record.” 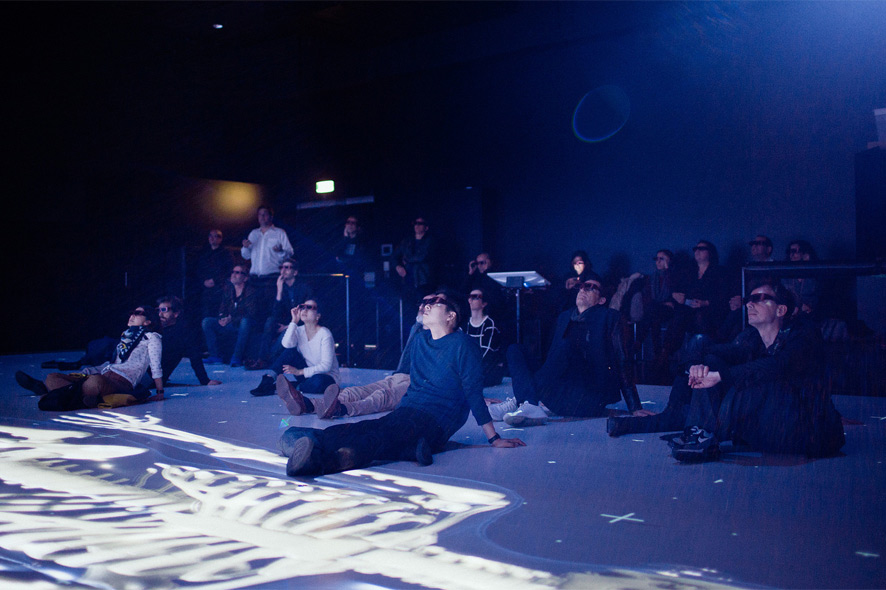 A short break for the juries – a trip to the Deep Space 8K. Credit: Florian Voggeneder

The jurors repeatedly point out that beautiful visuals aren’t all they’re after. Of critical importance is the narrative behind the moving pictures, and they stress that the background of the animation in each video has to be taken into account as well. Simply watching animated films and then, without commentary, putting them to a vote just won’t do. The jurors engage in the fine art of discussion, each one contributing insights from the area in which he/she specializes. Are the effects being screened truly innovative or are they already taken for granted in the animation field? Can you assess a video after having seen only excerpts of it? No! Nevertheless, the jurors have to agree on a way to narrow down the list of potential candidates. Only two “Thumbs Up” aren’t enough to make the cut; it takes a third “Like” to reach the subsequent round. The next entry flickers up on screen. One juror delivers an elaborate account of that animated film. Another responds: “So, is it a ‘Yes’ or a ‘No’?” 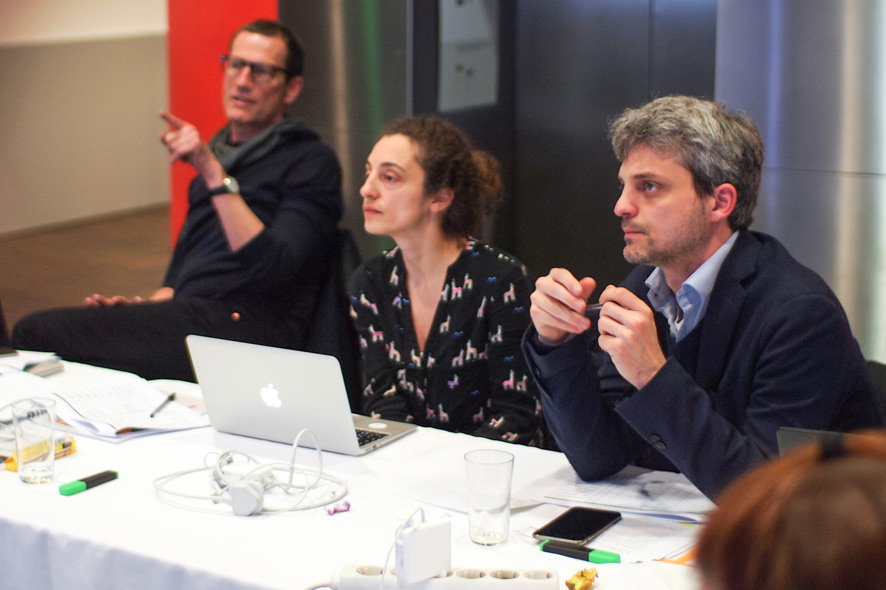 Looking for the Golden Nica in the category “Interactive Art +”. Credit: Martin Hieslmair

We ascend one floor while our eyes readjust to daylight, and enter the chambers of the Interactive Art+ jurors. The setup of each jury’s space is pretty similar: a big monitor screen on one wall, the jurors dispersed in front of it, and two members of the Prix Ars Electronica staff at their respective tables. In this category, one particular difficulty repeatedly crops up: the fact that it’s hard to evaluate media art from afar without having experienced it right up close. This demonstrates yet again how important it is for entrants to deliver detailed descriptions of their projects, to document them with photos and videos, and to present them in a way that makes the jurors sit up and take notice. 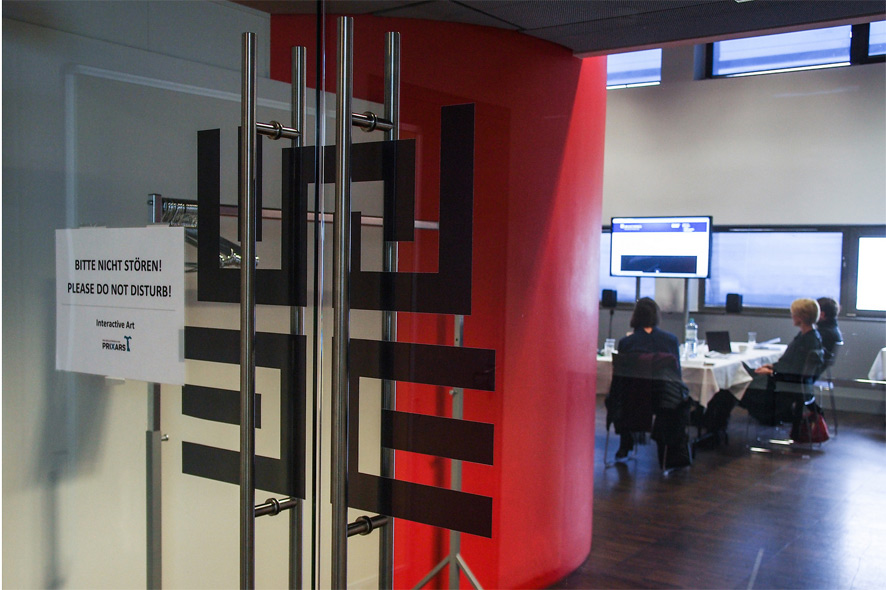 The advantage of having several jurors is that there’s always one among them who can bring in a particular perspective and information that the others might have overlooked. Jurors take the time for an in-depth discussion of these works and, if necessary, to clearly express in their own words what a particular artist is trying to get across. In light of this year’s expansion of the category—the plus added at the end of Interactive Art+—the jury openly engages with the issue of what interactive art is and can be. “There was never actually one specific moment at which we asked ourselves what interactive art actually is,” one of the jurors clued us in, “since the definition that was handed down from the 1980s has long since been discarded anyway.” We’re really looking forward to which projects are among the most outstanding works in this category in 2016. 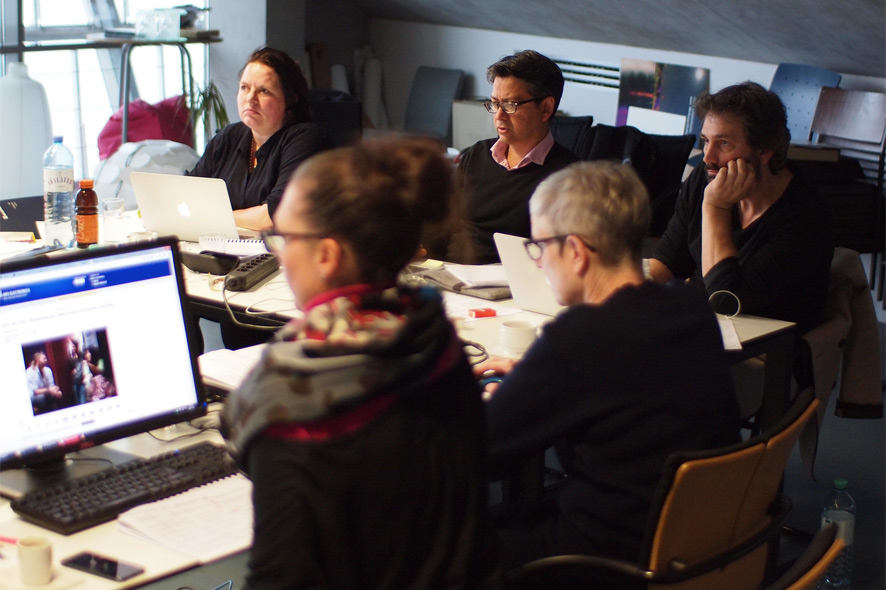 Which project will make it into the next round at the “Digital Communities” category? Credit: Martin Hieslmair

Cut to the Ars Electronica Futurelab. There are only a few hours remaining until the final verdicts come in. The shortlist is getting shorter by the hour, though the process of elimination is by no means becoming easier. Suddenly, it seems that the Golden Nica is as good as awarded. “Great, we have the six best projects! Picking the winner is easy,” resounds from the jury’s meeting room. Nevertheless, it isn’t long before someone else adds: “Really? Are we totally sure about this? I’d like to discuss it just a little bit more.” After all, the Golden Nica sends a powerful message, another juror points out. 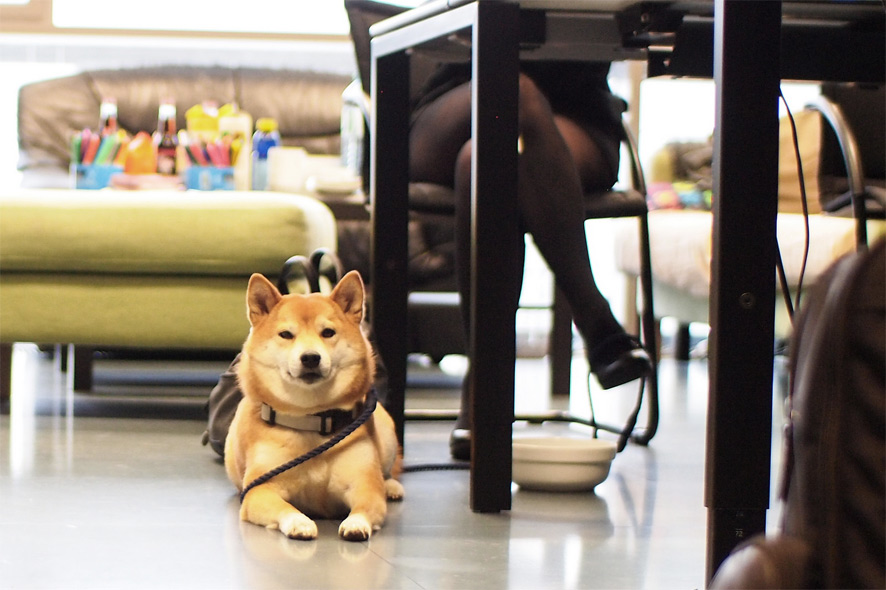 The mascot of the Digital Communities Jury 2016. Credit: Martin Hieslmair

“Shall we vote with a show of hands?” “No, this sort of democracy would be too banal; we should discuss all the projects one more time, and really take time doing so.” Here, it becomes clear that Digital Communities too is a community in its own right. And the time has also come to throw open the windows and let in a breath of fresh air. The lion’s share of the work has been done; now it’s just a matter of sweating the essential details. After all, only one can take home a Golden Nica. 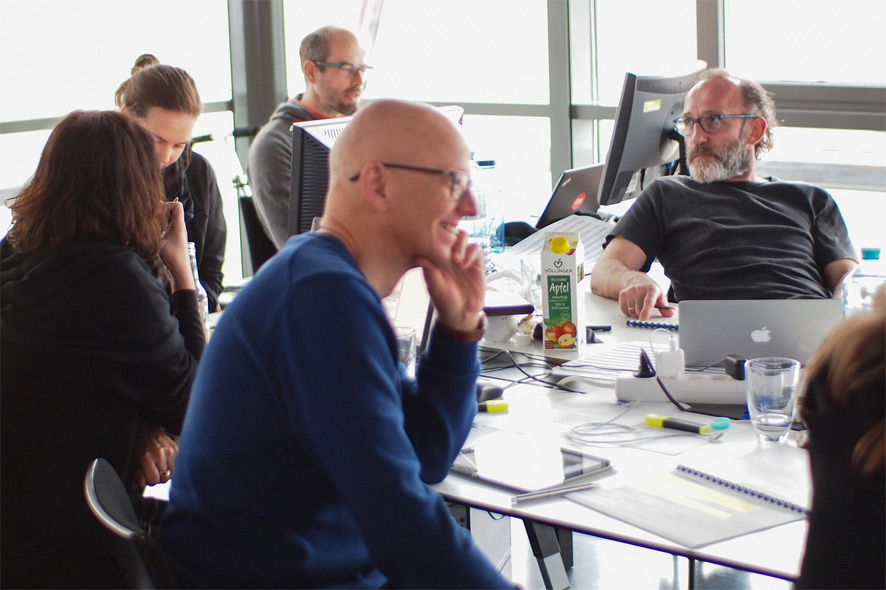 Adults judge the entries of children and adolescents – not an easy task. Credit: Martin Hieslmair

Evaluating entries by kids and young people under age 19 living in Austria is the job of the grown-ups on the u19 – CREATE YOUR WORLD jury. This is by no means child’s play, since it’s simply impossible for an adult to see the world through the eyes of a child, though adults most certainly can take the submitted works seriously and assess them accordingly. Of course, a project by a child nine years of age has to be judged by different standards than those applied to work by an 18-year-old. And then there’s the trying task of ascertaining just how much these youngsters actually contributed themselves to their media art work and how much is attributable to the intervention of a parent or teacher. 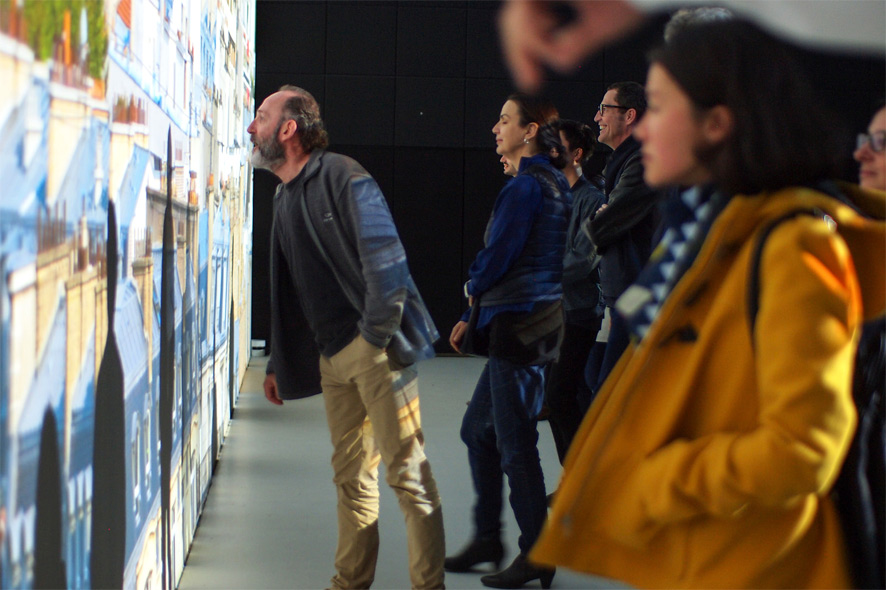 Another inherent characteristic of this category is that the range of submissions is enormous. Films, audio recordings and even board games are among the materials that made their way into Ars Electronica’s offices. For young people nowadays, the availability of digital media is far greater than it was even a few years ago, so what it comes down to is how young people take advantage of the ways and means at their disposal. The jurors in the u19 – CREATE YOUR WORLD category are in total agreement about this. The level of commitment that’s gone into a work is something that can indeed be ascertained. Addressing key social issues is certainly a positive criterion, but if what emerges from this confrontation is all too conventional and rather trite, then those are grounds for dismissal despite the good intentions. What’s decisive is the whole package—not just something that’s nice to look at. 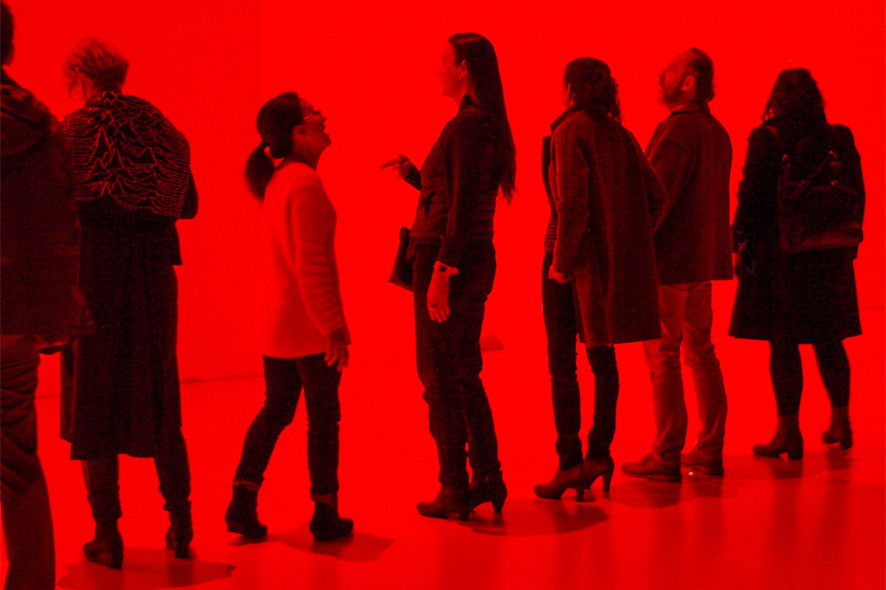 Where do we go from here?

The decisions as to the 2016 recipients of Golden Nicas, Awards of Distinction and Honorary Mentions have already been reached. What remains to be done is notification of the recipients themselves. On May 10, 2016, they and their prizewinning works of media art will be presented at a press conference and here on the Ars Electronica Blog and on ars.electronica.art/prix. A book entitled “CyberArts 2016” containing documentation of and elaborations on all these works will be published in summer 2016. And many of the prizewinning works will be on display at the CyberArts exhibition at the OK Center for Contemporary Art beginning on September 8th, opening day of the 2016 Ars Electronica Festival in Linz. The festival lineup will once again include Prix Forums at which the artists and jurors get together to discuss the works singled out for recognition this year, as well as the awards gala at which the Golden Nica statuettes will be formally bestowed upon this year’s Prix Ars Electronica prizewinners. Stay tuned for further developments!