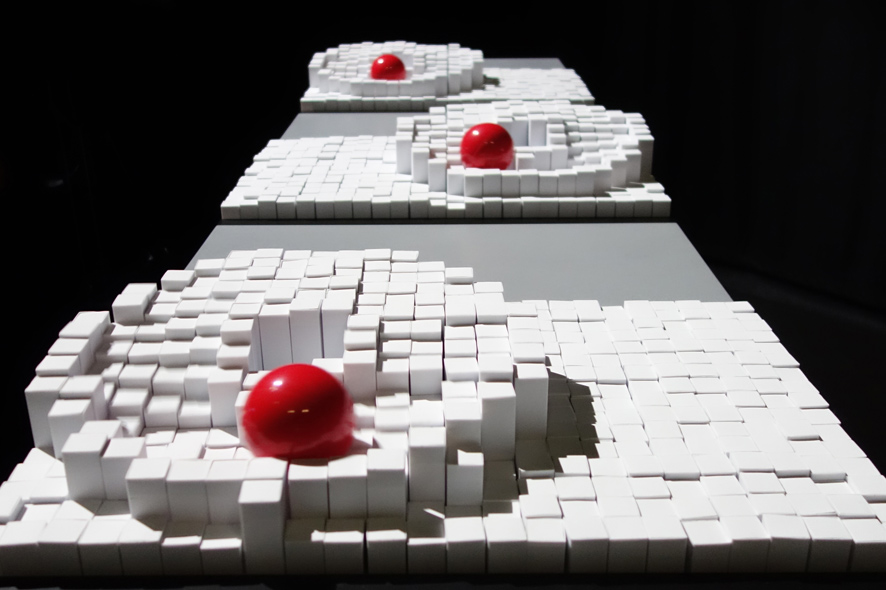 Linz, 8:30 PM; Cambridge, 2:30 PM. Right on time for a Skype appointment with Hiroshi Ishii, we launch our video conference with the MIT Media Lab in the USA, and the on-screen image materializes. Hiroshi Ishii has just emerged from a meeting; he takes us along on his device’s display as he climbs the two flights of stairs from the conference room to his office. From screen to screen, we talk about the visions his Tangible Media Group has been focusing on of late, how he defines the term RADICAL ATOMS—the 2016 Ars Electronica Festival—and about his long-term endeavors: a protracted clash with the all-encompassing Pixel Empire, and his ongoing search for new materials and forms of interaction with great future promise.

Hiroshi Ishii: “Radical” came from the word “free radical” used by chemists. In chemistry, the term free radicals means atoms, molecules and ions with unpaired electrons. They are unstable, very dynamic and transformable. So, the origin of “radical” is in chemistry, but now we want to use them at the 2016 Ars Electronica Festival to talk about “free atoms” and dynamic materials of the future.

You are thinking of the next human-machine interfaces. What basic elements does this kind of interface need?

Hiroshi Ishii: Now, there is huge hype promoting virtual reality. Also this interview—which we are doing via Skype conference call—your computers, smartphone, tablet, and television–everything is fundamentally pixels, whereby photons hit your retina and give you an illusion.

“Since I came to MIT 22 years ago, I’ve been consistently fighting against this “pixel empire,” where everything is put into intangible pixels and is stuck behind the screens. It’s an optical illusion, but nothing real. Our belief is “tangibility.” You can directly touch and manipulate and feel.”

Think about your loved one—you need to feel the heartbeat and warmth to believe their existence – tangibility; screens can’t do this. Our vision, “Tangible Bits“, started from the effort to go beyond pixels. Radical Atoms inherits this spirit. Radical atoms are “free” like we are. That does not necessarily mean the data, but a totally different view of the world. I’m a researcher; we are supposed to propose radically different, new, original ideas, and we don’t know if we succeed or fail. The pixel empire is so strong.

Could you please introduce us the way you and your team work at the Tangible Media Group of the MIT Media Lab?

Hiroshi Ishii: Three things are very important. First EnVISION – this is the most important driving force; not the technology and not the needs of the user. The technology we are using today becomes obsolete in three years. The needs are constantly changing. But the true vision lasts much longer than our lifespan. Vision-driven is the key idea, and Radical Atoms is a vision. EnVISION is very important to dream up the future you really want to materialize for your children or descendants.

The next important thing is EmBODY. We have to build the prototype to let people experience it. Are you familiar with the Music Bottles we exhibited at the 2001 Ars Electronica Festival? This is an example of EmBODYment of our concept. The vision has to be materialized and tangible using technologies such as electronics, computer forming, mechanical engineering and fabrication. So, embodying an idea in a tangible form, so that people can really interact using their body. In this example, they are opening bottles and they understand the concept.

The third point and most important thing is INSPIRE. Unless a work inspires people, it doesn’t stick; people never start thinking differently, and they will forget. To inspire people, there must be some profound message, beauty or aesthetics which people find very moving. Many of Ars Electronica’s activities have this inspiring pleasure—Ars Electronica inspires people socially, politically, culturally and technically. That is the reason why we are very happy and honored to be here in September 2016 to exhibit our work and talk at the Radical Atoms symposium. To summarize it: EnVISION, EmBODY and INSPIRE are our three main criteria.

Projects like TRANSFORM or biologic are two of many wonderful visions of human-machine interfaces that couple digital and physical domains. What are you currently working on?

Hiroshi Ishii: We are exploring many different materials. “Transform” is about one thousand pins moving up and down. In “bioLogic,” you saw Bacillus Subtilis natto, biological materials in which living bacteria work as sensors and actuators. But there are so many materials on this planet! We are exploring a variety of roads that lead us to our Radical Atoms vision. But the most important thing is: How to make sense in designing interactions. These basic technical components are just enablers, enabling technology. The question is how can we design meaningful interaction? We are doing a lot of conceptual work. If you look at “TRANSFORM,” you’ll see the red ball dancing on white pins. A white pin represents a Radical Atom; the red ball represents an old material, a frozen atom. I gave a talk about this stuff at the 2015 Ars Electronica Festival in PostCity in Linz last year. We are trying to come up with many new projects to exemplify the power of radical atoms in contrast to old materials like frozen atoms or intangible pixels.

For our readers: Can you already tell us what you will show at the 2016 Ars Electronica Festival?

Hiroshi Ishii: The RADICAL ATOMS exhibition will open at the Ars Electronica Center on September 8, 2016, the first day of the 2016 Ars Electronica Festival. At the moment, we are still in the phase of finalizing everything but our proposal includes many projects including “inFORM,” the Cooper Hewitt Design Museum Exhibition version. We will also show “bioLogic,” another major project using biological materials as an engine, and a lot of other stuff. There will also be classic projects like “musicBottles.” We are very happy to be bringing those things to Linz. Why? Because we’ve learned so much from different disciplines and communities, but media arts at Ars Electronica is the most inspiring community for us because they offer a totally new perspectives and meaning to our scientific-technical design work. We are looking forward to meeting amazing artists and designers to help us to shape the future of the dynamic physical & computational materials that inspire all the creators of the future.

What do alchemists of our time, what do scientists or artists, need for the development of such highly inspiring projects?

Hiroshi Ishii: Neither of us is a native speaker of English, but we are necessarily speaking English to communicate. In the same way, we all need to speak the common languages of art, design, science and technology, especially if you want to invent new materials for the purpose of expression, communication or provocation. You all have to speak the all the languages fluently through the approach of the alchemists of our time. Alchemists of today are not alchemists of chemistry or physics; they have to speak a much wider language—technological, artistic, design, scientific—and we also need to understand the business implications.

Materials are very good starting point; you have to create new materials to express your ideas. If you’re a sculptor, you use your hands and clay, if you’re a dancer or choreographer, you use your body; if you’re a musician, you use a piano to play and compose. How do you materialize your idea? How to create new materials for expressing, representing your idea? This is so important. I think the alchemists of this era should really speak all the languages, translate the ideas between the languages, and enjoy inventing crazy materials which nobody has ever seen or touched before, and in this way they’ll become the first persons on this planet to use their material for scientific experiments, artistic expression or design or whatever. “BioLogic” is a great example of this. We’ve invented a second breathing skin using bacteria. Human-machine interface is an old paradigm, but a human-living machine interface with an environment around the body is something new. We can push paradigms in inventing new materials and also give new meanings though artistic, scientific, design and technological points of view.

Over the coming weeks, the Ars Electronica Blog will be publishing extensive interviews and significant impressions in conjunction with our comprehensive coverage of the upcoming Ars Electronica Festival and the 2016 theme, RADICAL ATOMS and the alchemists of our time. You’re cordially invited to follow us on Facebook, Twitter, Instagram and Co., subscribe to our newsletter, and check out ars.electronica.art/radicalatoms to access info about the media arts festival set for September 8-12, 2016 in Linz, Austria. 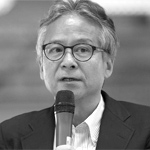 Hiroshi Ishii (JP/US) is a Jerome B. Wiesner Professor of Media Arts and Sciences at the MIT Media Lab. He is co-director of the Things That Think (TTT) consortium and director of the Tangible Media Group. He founded and currently directs the Tangible Media Group pursuing a new vision of Human Computer Interaction (HCI): “Tangible Bits” and “Radical Atoms.” Ishii and his team have presented their vision of “Tangible Bits” and “Radical Atoms” at a variety of academic, industrial design, and artistic venues (including ACM SIGCHI, ACM SIGGRAPH, Cannes Lions Festival, Aspen Ideas Festival, Industrial Design Society of America, AIGA, Ars Electronica, Centre Pompidou, and Victoria and Albert Museum,) emphasizing that the development of vision requires the rigors of both scientific and artistic review. In 2006 Ishii was elected to the CHI Academy by ACM SIGCHI. Prior to joining the MIT Media Lab from 1988-1994, Ishii led a CSCW research group at NTT Human Interface Laboratories Japan, where his team invented the TeamWorkStation and the ClearBoard.