P2P Foundation: Concentrated Knowledge for All 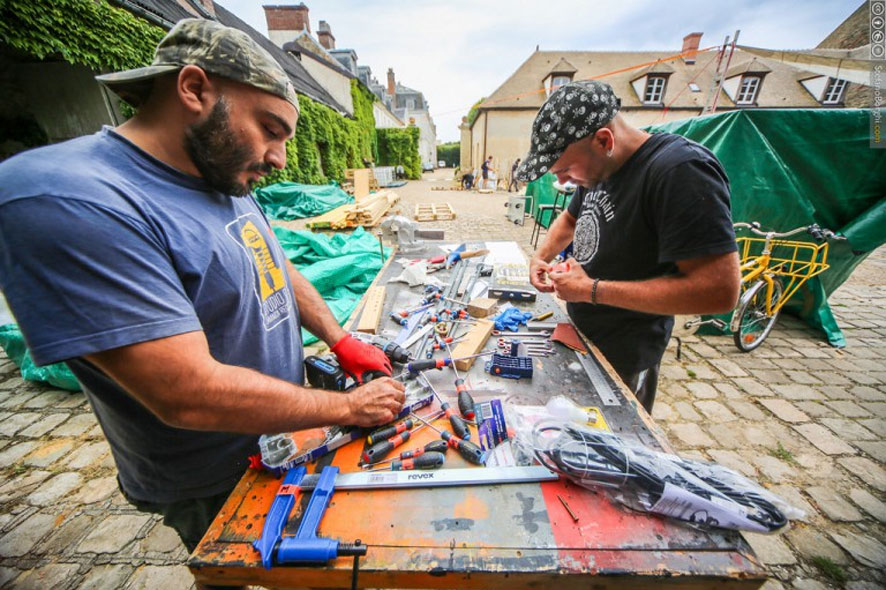 The term P2P is actually stands for peer-to-peer—i.e. communication among equals in a network. But in the case of the P2P Foundation, it isn’t defined strictly in a technical sense; P2P is meant more in the sense of jointly achieving objectives, collaboration, person to person and people to people. Since it was founded 10 years ago by Michel Bauwens, the P2P Foundation has put into place key building blocks for a new mode of communication—digital exchange of knowledge that’s self-organized on the internet and gets along completely without hierarchical structures.

There are many examples of P2P platforms—for instance, 3-D printable prostheses for people in war zones, open-source cars that can be assembled in no time, and Firefox, the Mozilla Foundation’s internet browser that was developed by a network including not only professional programmers but also volunteer experts from all over the world. The P2P idea has gone into every one of these projects.

The P2P Foundation‘s mission is to analyze and document these peer-to-peer strategies and to make them available for other uses to anyone interested in doing so. Its go-to source is the P2P Foundation Wiki, the world’s largest platform that bundles and shares info about P2P. The non-profit organization is this year’s recipient of the Golden Nica in the Prix Ars Electronica’s Digital Communities category. In this interview, Ann Marie Utratel and Stacco Troncoso of the P2P Foundation’s staff talk about their understanding of P2P and its advantages.

Some of us first experienced the advantages of a peer-to-peer (P2P) network while downloading files from P2P sharing platforms like Napster, Gnutella, Kazaa or BitTorrent. What’s your understanding of P2P?

Ann Marie Utratel: Although these platforms can be described as P2P, our understanding of it is more generally human-scale rather than exclusively tech-focused. For us, it means “person to person”, “people to people”. Peer to peer is a relational dynamic; it describes the process of people getting together and self-organizing in a non-hierarchical way to create common value. Processes like these have been happening throughout human existence, but with the advent of the Internet, we can see a rapid crystallization of P2P practices happening worldwide.

Stacco Troncoso: However, there are many different understandings of P2P. The key factor for us is whether these peer to peer dynamics channel the value they create into a commons. A platform like Airbnb, for example, may be P2P on the surface in that it is a group of people getting together to mutualize housing for travel rentals: but how is it creating a commons? Is the person who’s renting his or her house now a peer of Airbnb’s upper management or investors? In other words, do they hold a representative degree of decision-making power about the resources spent and gained in the enterprise? True P2P describes a more horizontal and self-managed system of peer interactions. Popular examples include Couchsurfing, Wikipedia and the Linux operating system, but we also see P2P practices increasing in the sectors of material production, politics and activism. When the structure becomes flatter and more broadly inclusive, less top-down, that’s a sign of P2P principles and activity. 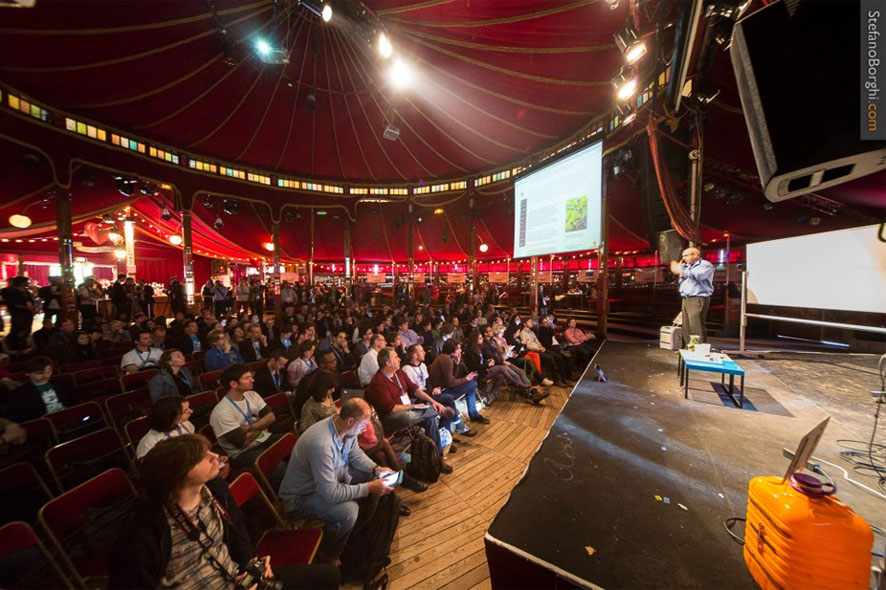 What are the advantages of peer-to-peer (P2P) for our society?

Ann Marie Utratel: We can even see this in the language used to describe this form of value creation: “non-governmental, non-profit or third sector”. It’s a rather marginalizing, even negating, set of descriptions that can create a subtle impression of outliers, or outsider activities, somehow less valuable. We believe that civil society, or “peers”, are in fact the main producers of value.

Stacco Troncoso: The roles of government and markets could be drastically altered through the introduction of P2P practices. Right now, cities like Madrid and Barcelona in Spain and Bologna in Italy are among those at the forefront of social innovation and democratic participation. Ethical entrepreneurial coalitions such as Enspiral and the Fairshares Association demonstrate that there are more democratic, fair and challenging alternatives to the market innovations of the start-up world.

What were the initial reasons to form the P2P Foundation more than 10 years ago?

Stacco Troncoso: Our co-founder, Michel Bauwens, discovered through his initial research that while P2P was an existing, practical relationship dynamic, it was still very much invisible, even to those involved. An initiative was required to help gather information with which to produce a solid, integrative P2P theory, share this knowledge and help people begin to form a resilient network. This work began in 2005 with our participatory wiki and has since expanded to include more in-depth research and advocacy work to help people, organizations and governments’ transition towards commons-based approaches in all fields of life.

p2pfoundation.net is a comprehensive resource for peer to peer practices. What are your target audiences and what do they find in your wiki?

Ann Marie Utratel: Our audience is varied. It began with academics and researchers, activists and organizers, authors and speakers, but the truth is that through social media and in-person events and outreach, our audience has become much wider, transcending the more specialized initial audience for wiki.

Stacco Troncoso: Our main wiki is very extensive and far ranging, featuring over 30.000 articles and more than 2.000 users. We also maintain another wiki (Commons Transition) focused on concrete solutions for change makers, as well two blogs, a daily “newspaper” which has been reflecting the ongoing realities of the P2P/Commons movement during the last ten years, and Commons Transition, which highlights our most refined materials, as well as feature stories and reports. Our dedicated research division, the P2P Lab, also regularly publishes research papers painstakingly analysing the potential of P2P practices.

Could you introduce us some current and innovative P2P projects you’ve encountered?

Stacco Troncoso: Examples abound in the fields of material and immaterial production. There are exciting projects like Refugee Open Ware, which provides open source solutions, education and prosthetics in war torn areas. There’s also the Tabby, an urban, open source car which can be manufactured in less than an hour, or Wikihouse, an open source construction set, allowing anyone to design, download and easily fabricate and assemble houses. The most widely visible projects include the Mozilla web browser, the Apache web server, and the Linux operating system and its offshoots.

Ann Marie Utratel: Apart from these manufacturing projects, we are also excited about P2P forms of governance in certain cities (mentioned above), with their inclusion of practises like participatory budgeting and civic decision-making. P2P is synonymous with innovation. 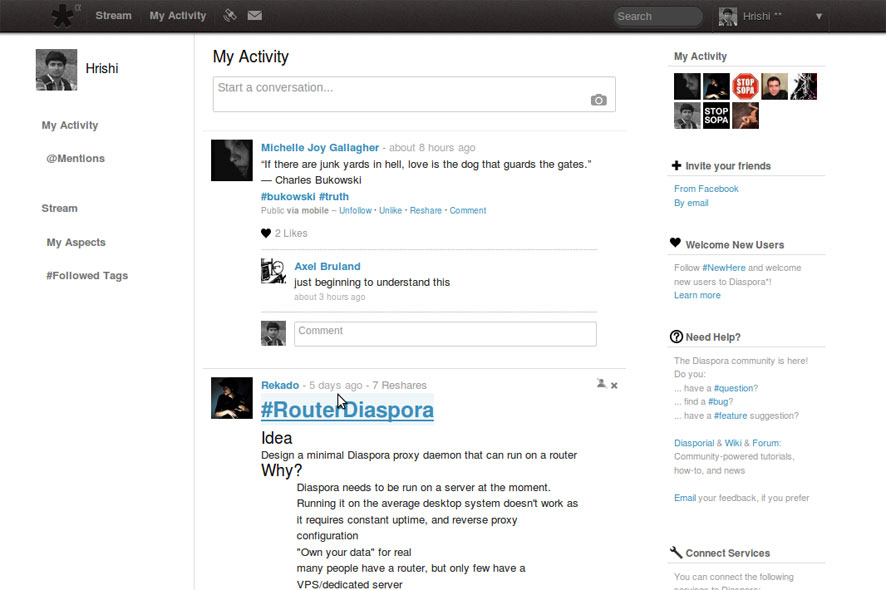 Are there any serious alternatives to social media platforms like Facebook and search engines like Google? And isn’t it hard to compete with these Internet giants?

Ann Marie Utratel: There are serious alternatives, such as GNU social, Duck Duck and Diaspora, but “serious” is not the same as “competitive”. In this, we have a long way to go. Even people who are educated about the dangers of centralized platforms find it hard to break away.

Stacco Troncoso: The pervasiveness of these platforms was built through huge investment programs and dubious business models (e.g. privacy concerns, harvesting user data), which have resulting in not only in popularity but also, far more attractive user interfaces. Decentralized platforms which do not traffic in user data find it much harder to find the necessary funding that would allow them to realistically compete with the giants.

Ann Marie Utratel: We need alternative funding options for platforms that create commons, not commodities, and which also offer real benefits to potential users, such as privacy, ownership of information, and more democratic interfaces. 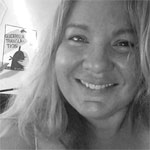 As part of the core team at the P2P Foundation, Ann Marie Utratel is the communications steward. She also works on the Commons Transition platform, web magazine and its associated projects, as well as on the P2Pvalue project. Additionally, she is the co-founder of Guerrilla Translation, and is a Network Hubs correspondent for the Connected Actions for the Commons project of the European Cultural Foundation. 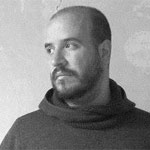 Stacco Troncoso is the strategic direction steward of the P2P Foundation as well as the project lead for Commons Transition, the P2PF’s main communication and advocacy hub. He is also co-founder of the P2P translation collective Guerrilla Translation and designer/content editor for CommonsTransition.org, the P2P Foundation blog, and the new Commons Strategies Group website. His work in communicating commons culture extends to public speaking and relationship-building with prefigurative communities, policymakers and potential commoners worldwide.

NOTE: The Prix Ars Electronica is featured in the CyberArts exhibition, the Prix Forums and the Ars Electronica Gala at this year’s Ars Electronica Festival (theme: RADICAL ATOMS and the alchemists of our time; dates: September 8-12, 2016). At Prix Forum II – Digital Communities on Saturday, September 10, 16, festivalgoers will have an opportunity to meet Stacco Troncoso of the P2P Foundation and get first-hand information about this non-profit organization.