The Future of Self-Service in the Data Kitchen 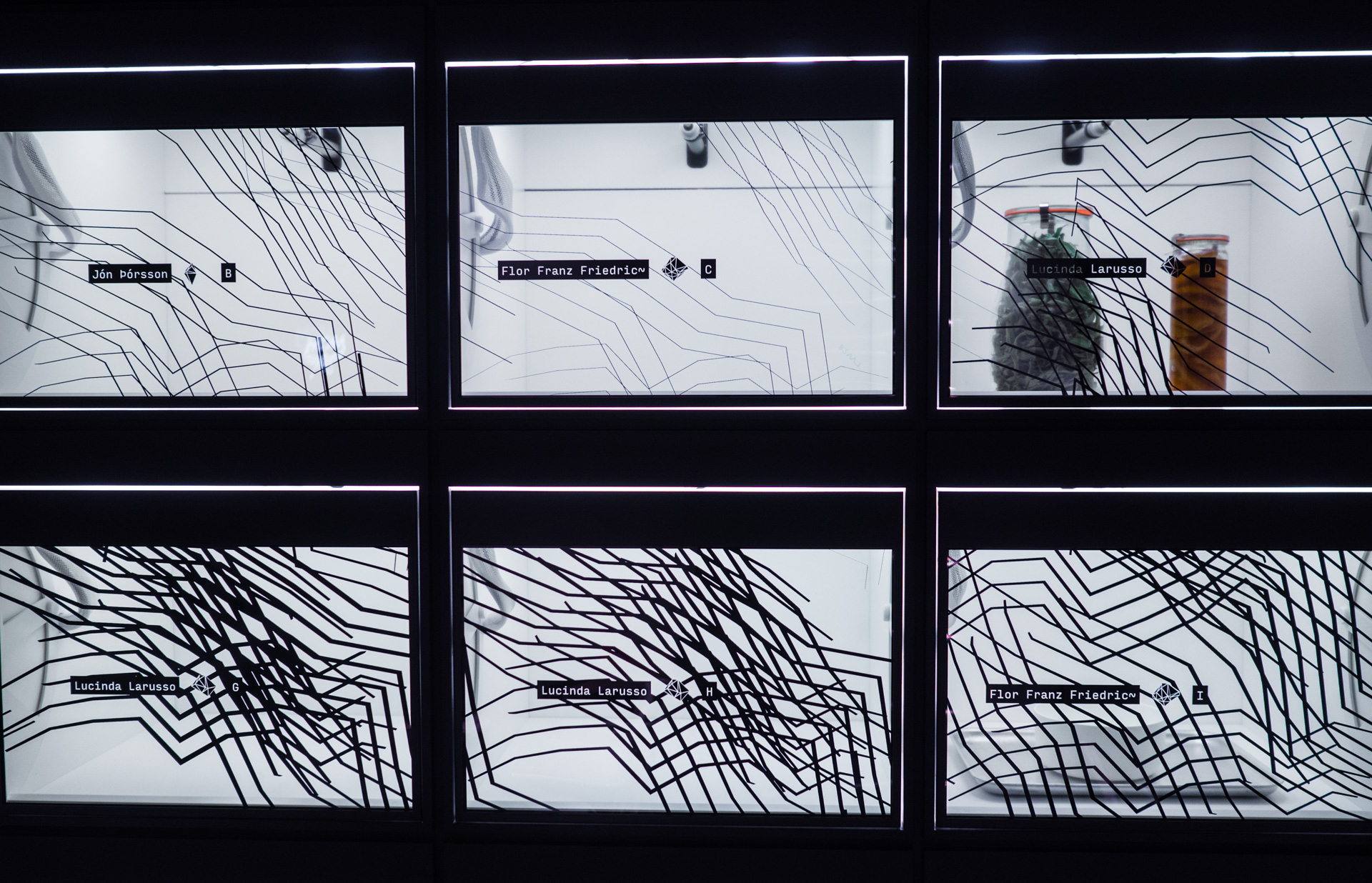 SAP’s launch of Data Space at Rosenthalerstraße 38 is setting up a real-world site of creative exchange that, in addition to its aesthetically appealing ambience, is also equipped with state-of-the-art technology. To live up to that claim, the innovative software giant called in a longtime partner, the Ars Electronica Futurelab, to create a dataspace that facilitates creativity. In carrying out this commission, the Linz-based media lab developed a table that takes textual and visual input and generates chains of associations that are conducive to imagineering. To make for a more participant-friendly process of discussing the content generated thereby—so-called Seed Cards—a data wall displays a likeness of the tabletop image. We found out how this elaborately programmed system functions directly from those who did it and right on site in a blog interview headlined “Berlin’s New Meeting Place For Start-ups: SAP Data Space“. 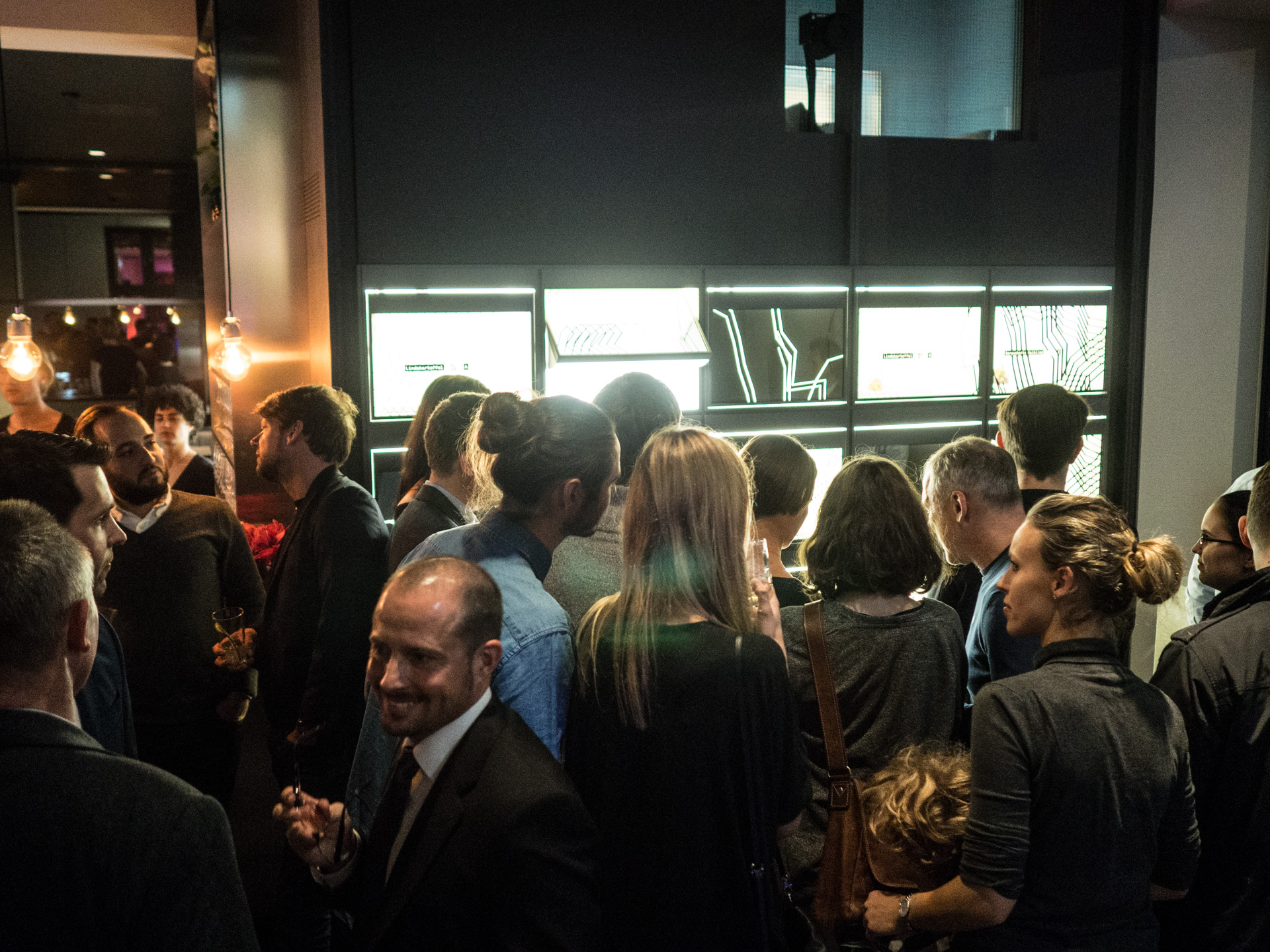 Great feedback for the new Foodwall at the opening celebration of the  Data Space on December, 12th.

Needless to say, configuring Data Space went way beyond futuristic furnishings; the assignment also entailed making Data Kitchen the leading-edge of food dispensing. And this was to correspond in every way to what SAP stands for as a firm—via data transfer, no waiting, with masterful finesse that makes it stand out from the crowd. On the basis of a core concept by star Berlin restaurateur Cookie and interior designer Tina Steffan, the Ars Electronica Futurelab in co-operation with Berlin’s design furniture manufactory artisengineering and interior designer  Laura V Rave created a so-called Foodwall that’s filled with tasty content via an app by the firm Cosmocode, and features compartments that can be opened via confirmation e-mail. The boxes themselves were crafted by an innovative Berlin-based manufacturer named ARTIs. Once hungry diners have specified their preferred mealtime and taken care of the check via Paypal, they’re only minutes away from enjoying fresh, healthy and usually vegetarian courses. The drink recommendations and clean-up remain the jobs of sommeliers and waiters. Dishes are taken from one or more of the 20 boxes that are filled just before the guests arrive. To avoid feeding the rumor mills, project director Stefan Mittlböck-Jungwirth-Fohringer, artist/developer Peter Holzkorn and developer Otto Naderer took stock one last time of all the tasty organic ingredients the Ars Electronica Futurelab contributed to this dish. 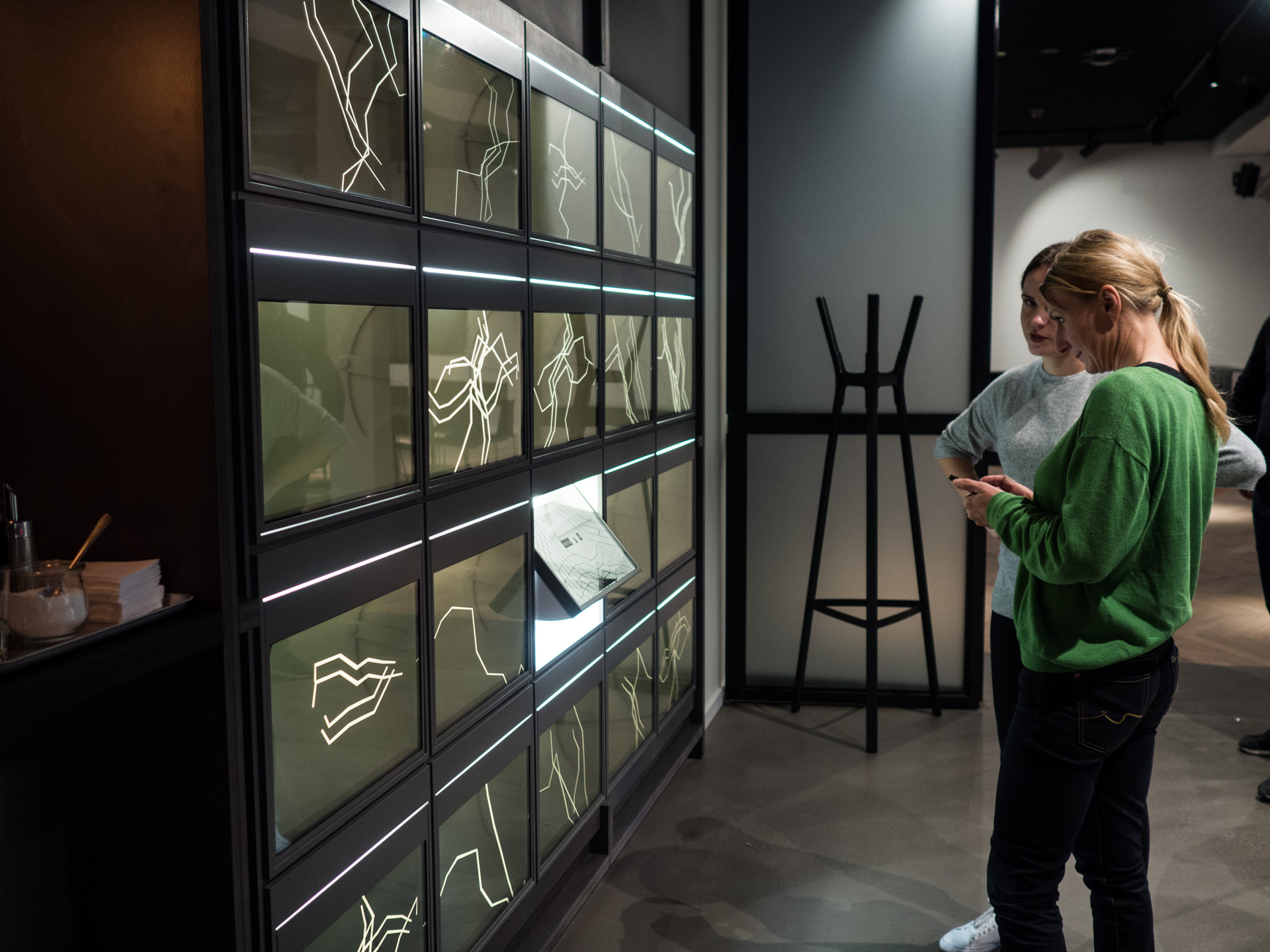 Prior to the opening, the communication between the APP and the boxes are exensively checked. Credit: Peter Holzkorn

Could you briefly explain the Data Kitchen’s concept and talk about who’s implementing it?

Stefan Mittlböck: First off, SAP lined up a top gastronomy manager: “Cookie,” one of the stars of the Berlin scene, who’s brought in his own restaurant manager, executive chef, assistant and a whole crew. The accent is on fresh food and culinary variety, so that calls for people who can take care of the preparations and the logistics accordingly. The only elements that run completely autonomously are ordering and paying the tab, which are designed to eliminate waiting and thus one of the main sources of diner dissatisfaction in conventional restaurants. Here’s how it works: You use an app to put together the dishes you want for, say, breakfast or lunch, you enter your exact time of arrival, then you pay via Paypal and you receive your order confirmation. Your food is prepared just in time, and is available for pickup in one of 20 compartments in the Foodwall. Then at the predetermined time, you open the compartment containing your order via the nickname in the e-mail you received. 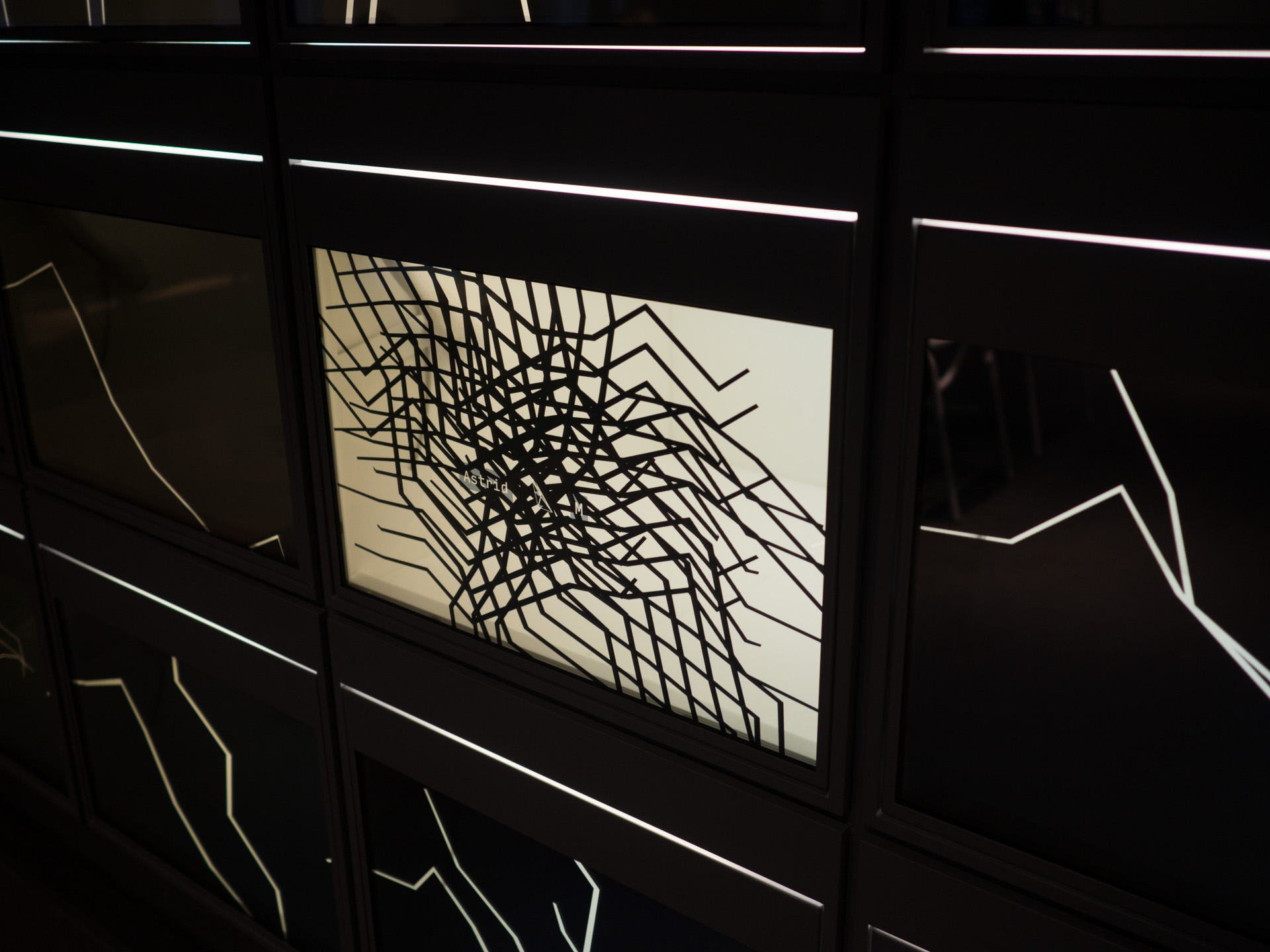 OK, but what about the rather off-the-wall case of somebody without a smartphone who just stumbles in off the street and wants something to eat?

Otto Naderer: There’s a Pad available on-site, but you have to do it online. There are also staffers who can assist you, as well as a waiting area right on the Café’s premises. Plus, whoever doesn’t have Paypal or a Visa card can use cash to buy a voucher containing a code you can input to order via the app. So, you don’t necessarily have to be in possession of something you don’t want to own. The only thing you’re forced to do is to somehow place your order online.

So, the dishes are stored or kept warm in the food containers until the guest turns up and unlocks them via online command. Peter, you designed the windows of the individual compartments in which the orders are made available. What were your main considerations?

Peter Holzkorn: Depending on the meal and the person who ordered it, a flow of data generates abstract lines that form a pattern—an abstract visualization, so to speak, playing out on the transparent screens. That’s what the guest sees. And what happens on the other side is also characterized by completely automatic procedures. A member of the kitchen staff places the particular dish into a compartment, which is equipped with sensors that detect that food has been inserted; then, when the person who placed the order inputs his/her nickname, the compartment is pneumatically opened. 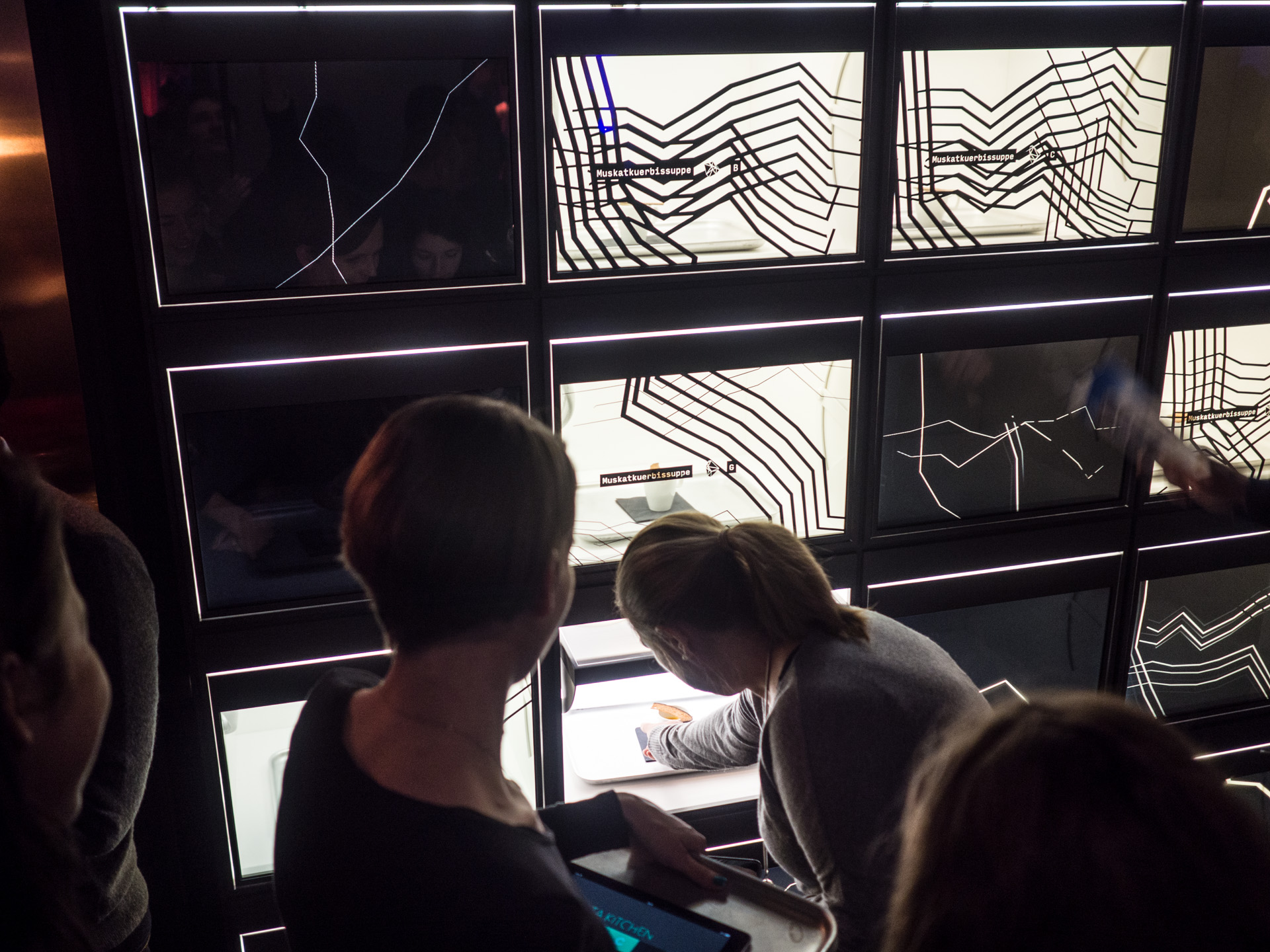 The boxes open via clicking the confirmation mail one receives after the checkout. Credit: Peter Holzkorn

Stefan Mittlböck: Peter generated an avatar that assumes an individualized shape depending on the nickname—that is, on the particular combination of letters. That’s the playful element. In any case, only the one who ordered and paid for the food and pushed the button on his/her cell can claim the order—regardless of whether s/he likes the avatar and wants the dish for that reason. (Laughs)

Is this concept just a novelty or is there also a practical benefit?

Otto Naderer: The restaurant proprietor is giving diners the gift of time. But this doesn’t mean eliminating the human dimension. After all, the staff has more time to devote to the guests instead of having to rush from table to table taking orders. Now, they can explain the concept, present the daily specials, engage in small talk … Of course, the essential reason why the concept works is that the menu has been put together to appeal to cosmopolitan foodies.

But there’s no tipping, which is ultimately what lets the serving staff earn a decent living.

Peter Holzkorn: This aspect has been taken into account too. When you place your order, you can click on a button to leave a 2.5-10% gratuity and thus observe this custom. This is the fastest and most reliable way to eat well without dispensing with hospitality. 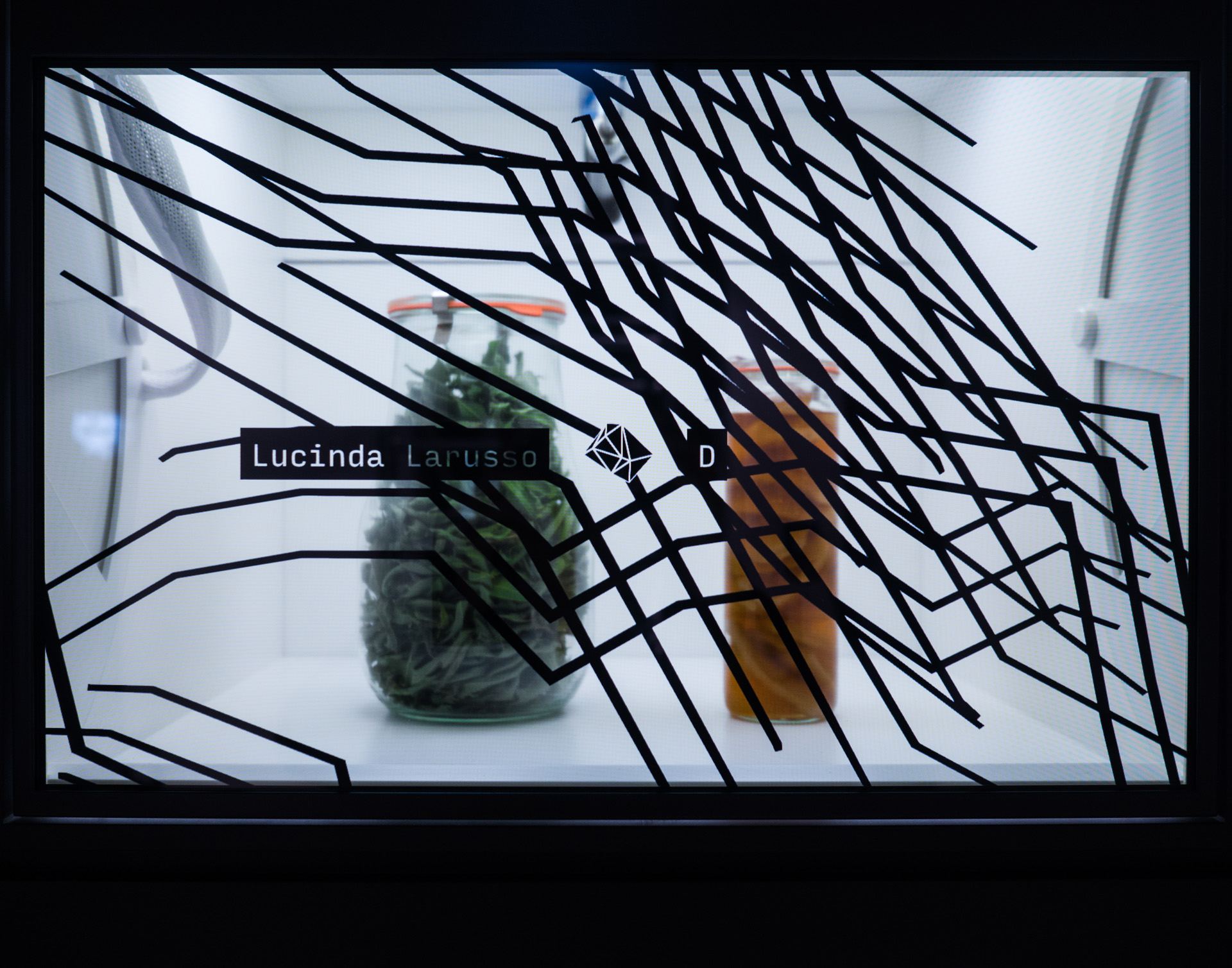 A special sensor recognizes when there’s food inside the box. Credit: Peter Holzkorn

Were there interior design considerations the Foodwall had to conform to?

Stefan Mittlböck: Yeah, it’s a great fit in interior designer Laura Rave’s overall concept. But actually, our aim was to evoke Gemütlichkeit, not to achieve a cool, high-tech look like the word “data” in the name suggests. Now, that doesn’t mean we won’t accommodate the typical needs of our clientele’s online lifestyle. There’ll be open WLAN, and, after the premiere, we’ll see if our premises do justice to the usual array of flip-up laptops. That’ll develop. By the way: the café opens on December 12th; until then, we’ll be conducting tests and fine-tuning the operational sequences.