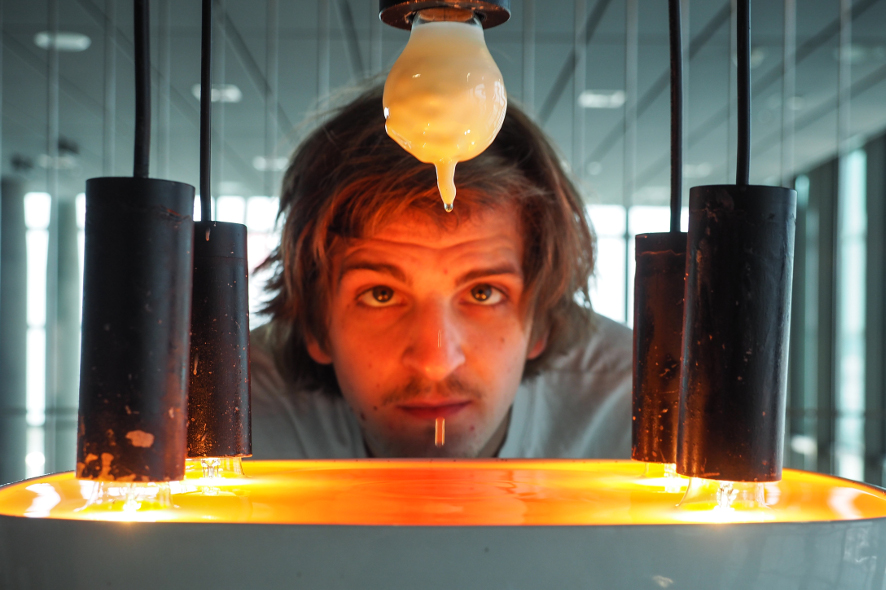 This is Round 7 of TIME OUT, an exhibition series offering visitors to the Ars Electronica Center insightful looks at work being done by undergraduates in the Time-based and Interactive Media program at Linz Art University. The arts bachelor program offers students the latitude to express themselves creatively in audiovisual terms, to experiment with digital media, and to implement their own ideas. This show was once again curated by Gerhard Funk, the director of the program, and Gerfried Stocker, artistic director of Ars Electronica. They selected nine students whose works are being presented in the Ars Electronica Center.

In Domas Schwarz’s work entitled “Wachstropf” (A Drop of Wax), “icicles” of wax form around a light bulb, melt due to the heat released when the bulb is switched on, and form again after the bulb is turned off and cools down. The installation showcases the beauty of natural processes and the transience of the environmental states that we’ve naturally grown accustomed to, and constitutes a metaphor for the works created in this world by nature and humankind. Domas talked with us about his work. 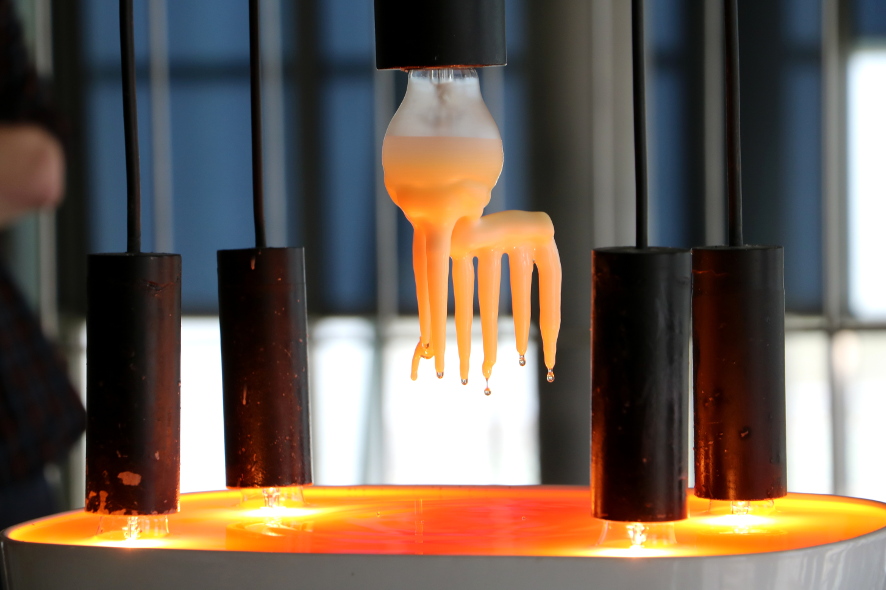 This isn’t the first time you’ve exhibited your work in the TIME OUT series at the AEC. Many visitors are sure to recall your time-lapse video “Urfixed Light Animation” as well as ceramic pour printing, the new 3-D printing method you developed. This time, you’re presenting an installation that combines light and wax. So, your oeuvre is highly diverse! What inspires you to work with all these different materials, techniques and forms of artistic expression?

Domas Schwarz: I’m fascinated by the unpredictability of visible manifestations of natural processes, the possible changes of state and malleability, and the digital absorption of light. For “Urfixed Light Animation,” I took long-exposure photographs at the Linz Fair and used a time-lapse technique to show these images, the appearance of which I couldn’t totally control. The arbitrary animation of the illumination of the rides at the fair created light paintings whose design I couldn’t precisely control, and this repeatedly rewarded my efforts with visual surprises. My “Gitterlinge” design series and the method I developed for it—3-D printed casting forms for the production of plaster objects—emerged rather by accident in conjunction with time-lapse experiments with melting as part of 3-D printing. But the results and flops of the first experiments enabled me to come up with the new idea for the ceramic/plaster pour printing process. These interests merge in “Wachstropf”—working with light, experimentation with the aggregate states of materials, and the photographic documentation of emerging and decaying structures.

My original idea of amalgamating these three interests was the time-lapse film. But in the process of implementing this idea, I often had to acquire skills working with various techniques and materials in order to later be able to use a camera to capture the inherent processes, some of which I had artificially triggered. This research and development work frequently revealed to me new approaches and concepts for the implementation of the original idea. The job of constructing the “Wachstropf” machine convinced me to scuttle the planned video project and to develop an installation that presents the formation process of the wax “icicles” in real time. Thus, my experimental attempts at visually implementing ideas determine in step-by-step fashion the techniques and forms of expression that I use, and not vice-versa. In going about this, I try not to limit myself to an artistic handicraft; rather, I let my multifaceted interests and ideas determine the material and the associated techniques I’ll use. 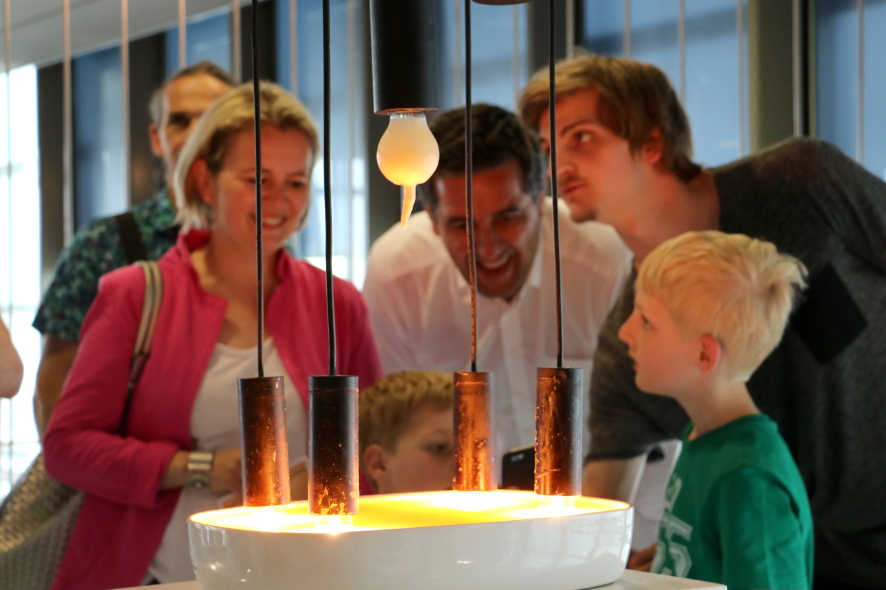 Your installation “Wachstropf” comes across as highly fragile as it portrays the cycle of creation, transformation and transience. Could you say a few words about this?

Domas Schwarz: The formation of icicles in nature is associated with special environmental conditions that are usually of very short duration and often result in the rapid demise of the object that took shape. In art as well, the emergence and dismissal of ideas, designs or sculptures seem to me to be parallels and metaphors of the evolutionary cycle of nature that’s characterized by constant repetition, variation and evolution. In the case of “Wachstropf,” these small changes and modifications seem to be made visible in the form of wax “icicles” that are created out of the same basic material. The wax “icicles” produced in the TIME OUT installation are thus always formed under the same technical conditions and out of wax heated to the same temperature. Nevertheless, these so-called stalactites manifest themselves as a variety of different sculptural structures due to the micro-climatic influences of the immediate surroundings. 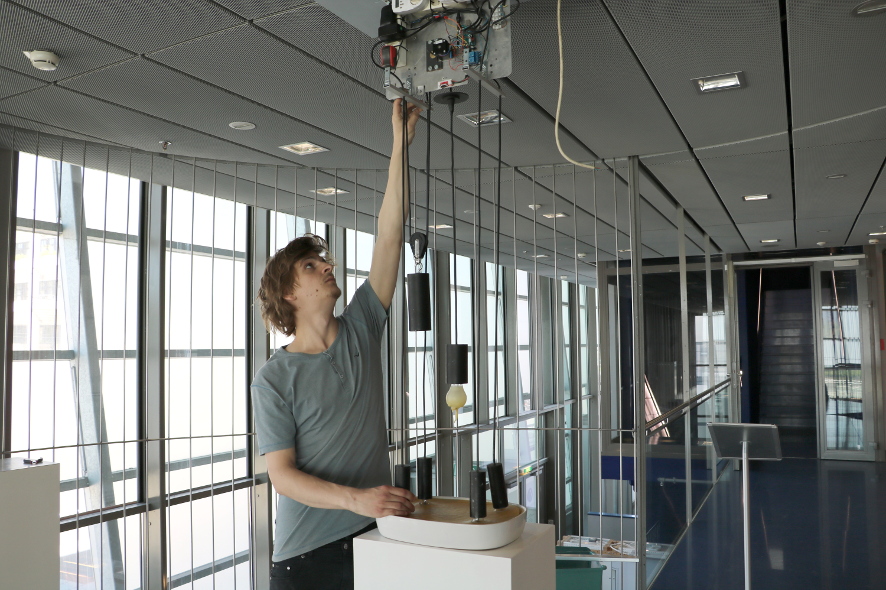 What inspired you to create this installation?

Domas Schwarz: My brother Michi experimented with dipping his sculptures into fluid candle wax. This inspired me to try out this process with light bulbs in order to produce icicles that are made to melt by the heat generated by a switched-on lamp. This time-consuming and monotonous process of dunking the light bulb turned into a tedious, laborious job, which gave me the idea to seek an automated solution for this step. 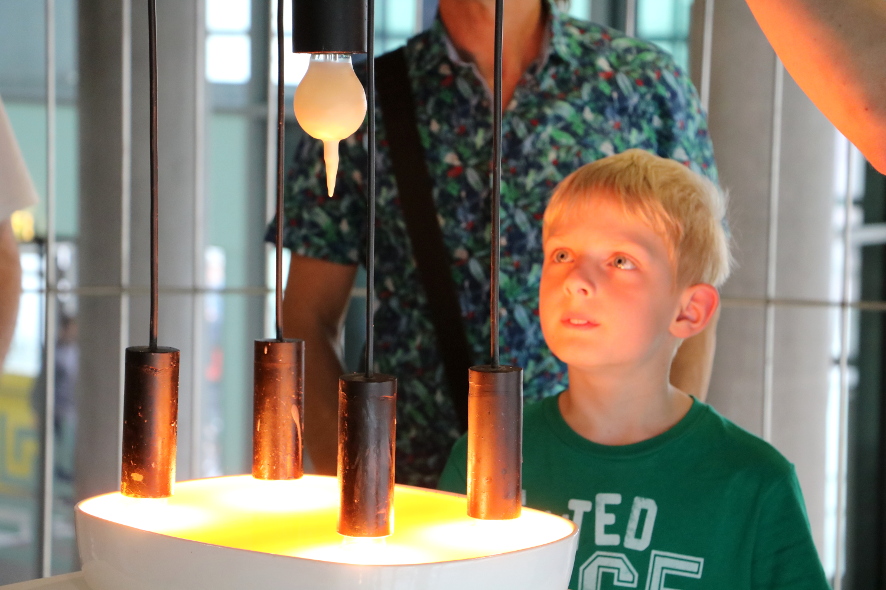 Even the little ones marvel at the “Wachstropf”-installation. Credit: Magdalena Sick-Leitner

What project are you working on now? What will we be seeing from you next?

Domas Schwarz: In one of my current projects, I attempt to document on film the motions of living organic structures. To capture these fascinating visual impressions, I’ve been looking into the living conditions of these creatures. But I’m increasingly getting away from the idea of an experimental time-lapse film; at the moment, I’m still in search of the best-suited means of artistic expression and representation.

The TIME OUT .07 exhibition opened on May 23, 2017. Visitors can view these works by student at any time during the museum’s opening hours.