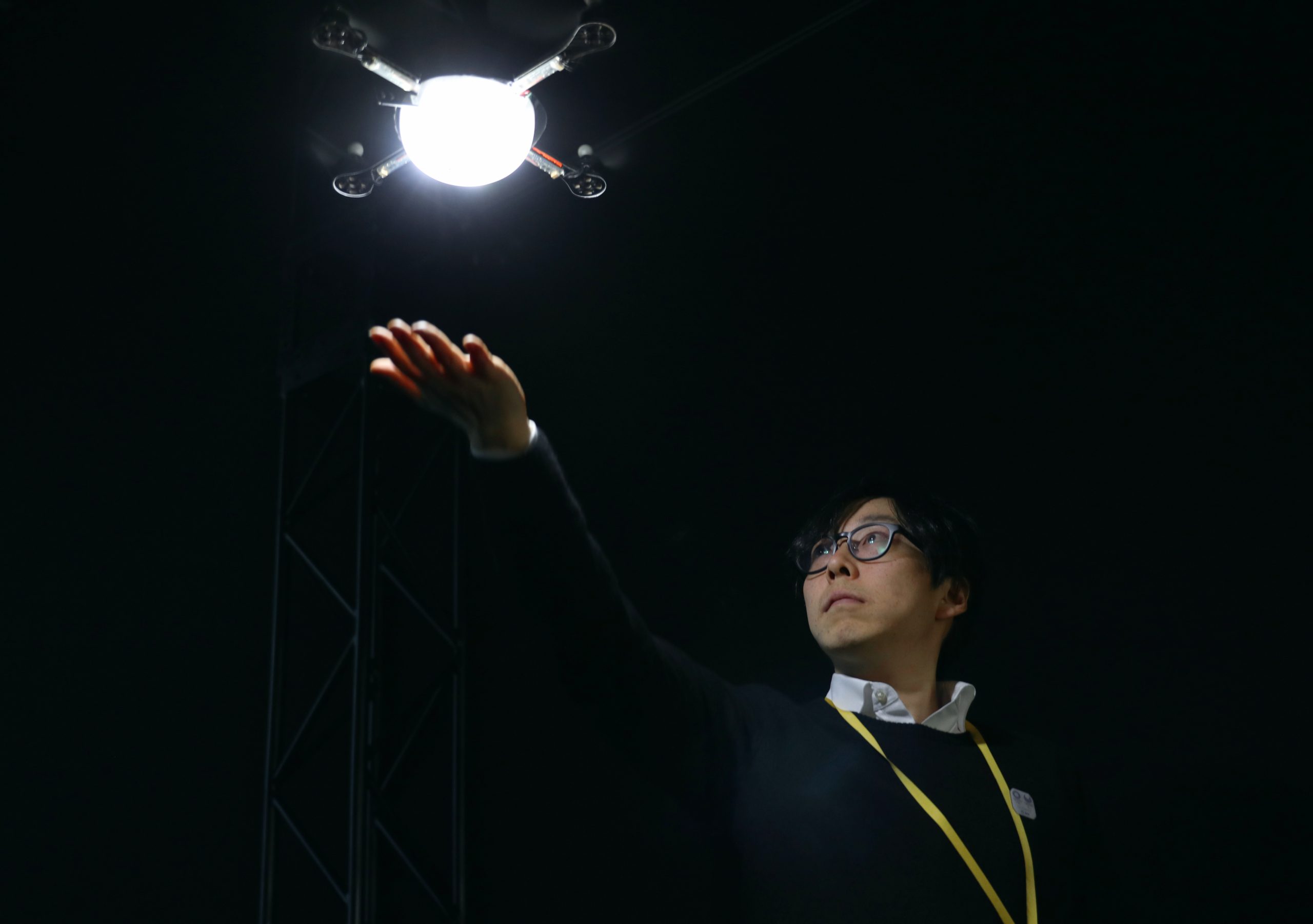 The term “Spaxel” gained fame in 2012 and has been associated ever since with performances by illuminated drones. But Spaxel has another level of significance that goes beyond airborne artistry by unmanned aerial vehicles. The space-constitutive function of a space element (Spaxel) is not necessarily limited to the heavens, where these drones’ light shows have taken place up to now. Rather, the concept of a swarm—in its various interpretations—seems to pervade the future of many and varied fields of application. Closely related to the show concept is the work we’ve been doing NTT on Sky Compass. Here, swarms are deployed as a communications medium that takes a playful approach to routing crowds—of visitors and locals—to their destinations in Tokyo 2020.

Furthermore, how to deal with networks of intelligent, autonomous robots raises many other questions that the Spaxels Research Initiative aims to formulate and pose.

Drones in particular were thus merely the initial spark that launched the Spaxels Research Initiative, a coalition of the Ars Electronica Futurelab and Ars Electronica Spaxels with associates in industry and science that’s making its public debut at this year’s Festival. 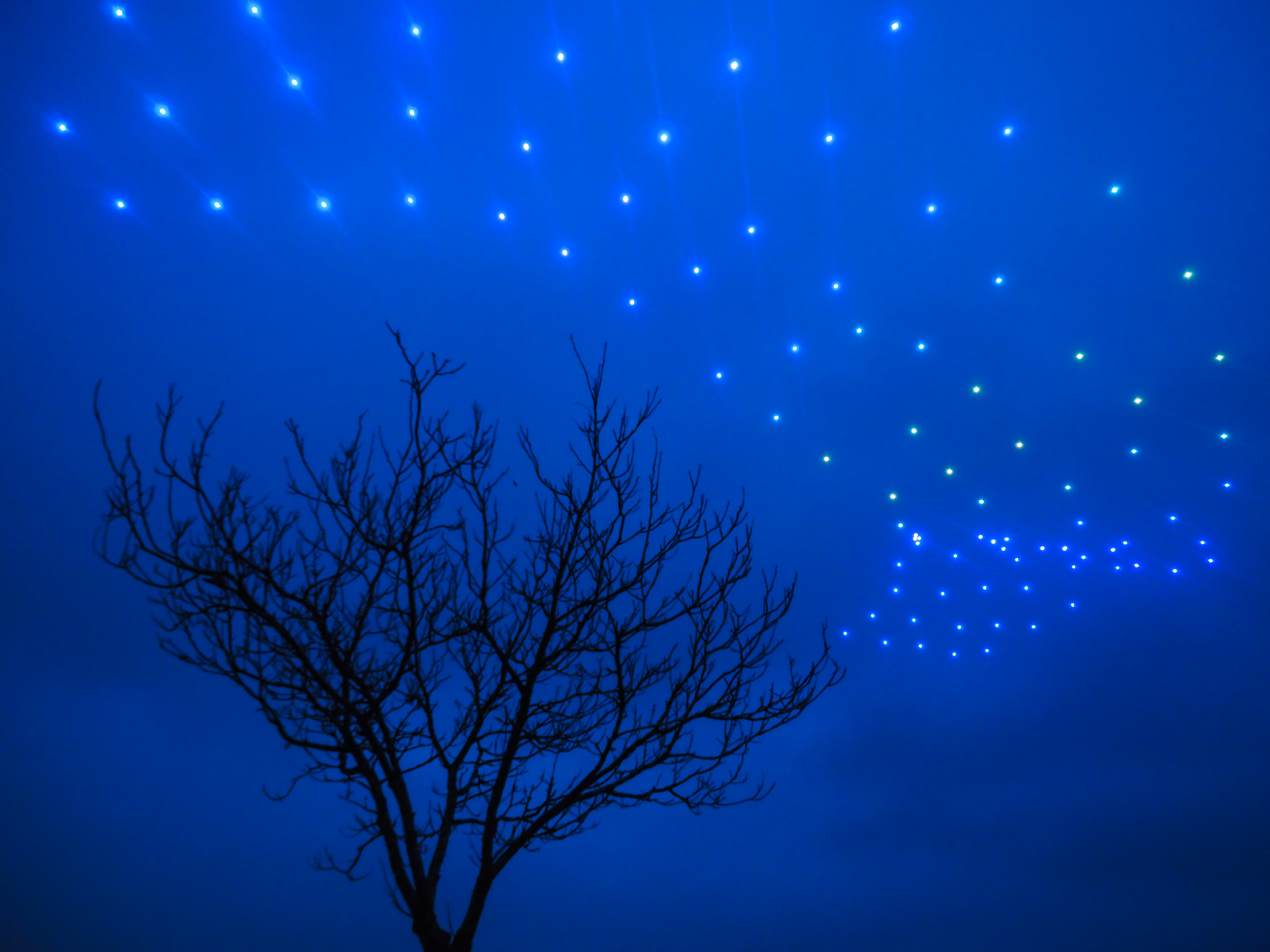 Spaxels: Illuminated drones as a swarm was the ignition of the Spaxels Resrearch Iniative. Credit: Martin Hieslmair

In the part 1 of the interview, initiator Horst Hörtner gives an overview about the purpose and the framework of the co-operative action in the Spaxels Research Initiative.

What issues will the Spaxels Research Initiative (SRI) be delving into?

In light of the technologies now on the horizon, society needs to focus on this issue! The SRI is taking on this quite difficult task so that more and more people will pay attention to this. How to raise this awareness is no easy task, since the technology can’t be intuitively comprehended. The Spaxels as a performance were a big step in this direction—after all, when we think of swarms, what comes to mind are those in the animal kingdom that have already been thoroughly measured, analyzed and modeled by scientists. The basic approach in this scholarship is to consider the behavior of a group of individuals acting as members of a swarm—for example, the striking videos of thousands of starlings flying in free-form formations. But here we’re totally omitting consideration of the infrastructure on which swarm behavior is based, as well as the objective of such swarm flights. Why do starlings do that? We don’t seem to have come up with a conclusive answer yet! And the fact that we’re focusing our consideration on nature is a limitation that’s an upshot of the narrow perspective of the present. 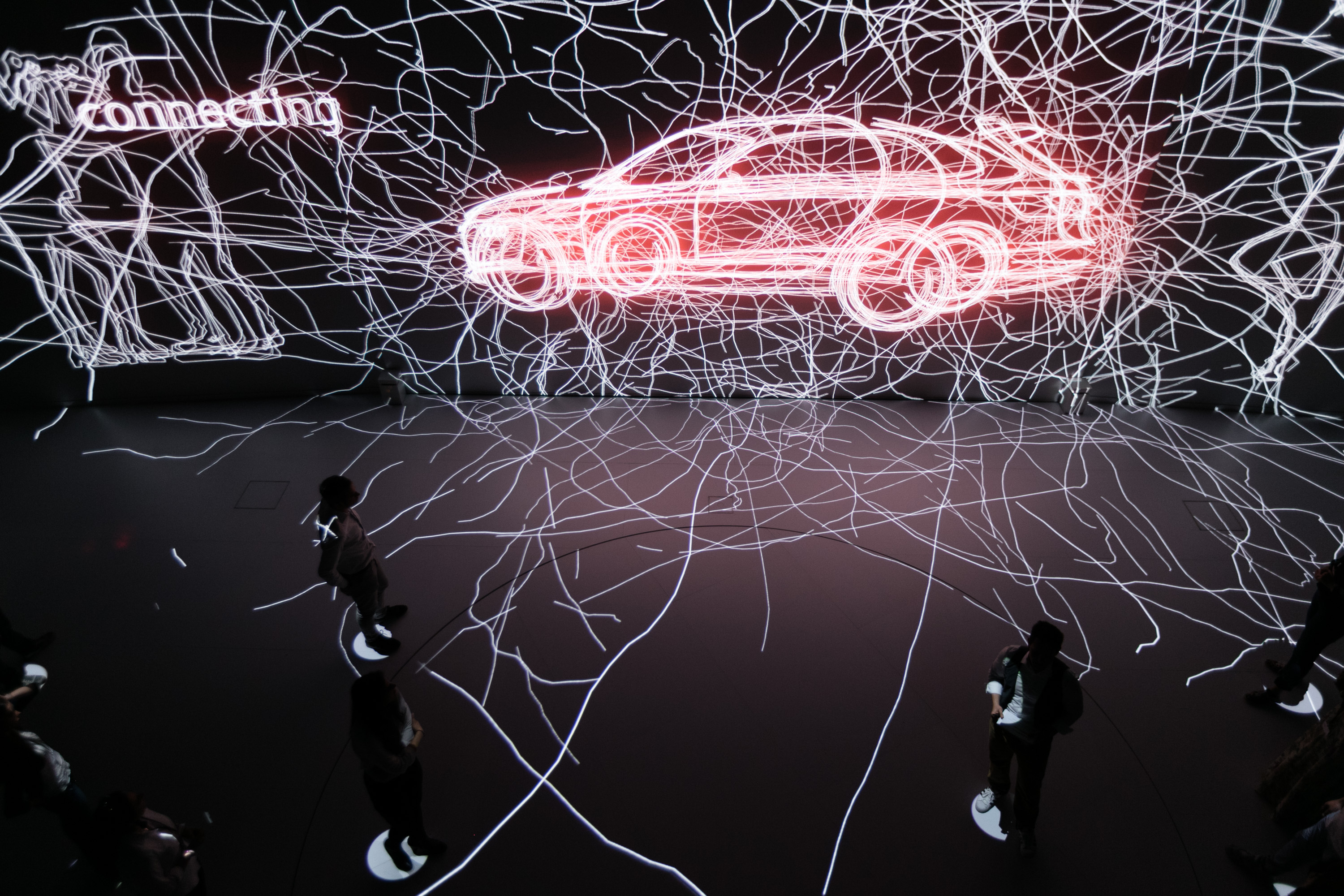 At Munich’s Audi Training Center, the Ars Electronica Futurelab gave an artistic rendition of the topic  of digitalization that dominated the Central Technology Training “meet the future”.  One could only think about the future in the here and now. Credit: Florian Voggeneder

The swarms of the future—in other words, autonomous systems of the future—will be driven by novel, artificial concepts such as artificial intelligence and machine learning. This will have a direct impact on the individuality of the individual components and/or the autonomy of the robots and their communication among themselves as an interacting group.

We human beings are predisposed—or compelled—to mix the infrastructures of the present with conceivable future developments. We see the infrastructure element “street,” and think of an “autonomous vehicle” and this yields a picture of a future autonomous vehicle driving on a modern-day street. This is a concept of mobility that’s transported by the context of the here & now—in abbreviated form: a person and his/her car.

How do we overcome these naturally imposed limitations? After all, we can’t time-travel into the future and look back!

Horst Hörtner: The constriction resulting from projecting the here & now into the future constitutes a major problem. We need to be liberated from two aspects of this limitation—one is scientific-industrial; the other is social.

In this effort to free ourselves from a present-day perspective, we have to endeavor to create a conceptual context of technological progress and social development. And this conceptual context is at the core of the Spaxels Research Initiative’s mission. We’re investigating the conceptual context of the swarm-based self-organized systems of society and technology from the various perspectives of art, science and industry. In going about this, we do not privilege the objective of developing answers, but rather of posing the right questions.

The idea of the SRI arose from the work of the Futurelab in general and specifically from art projects with the Spaxels in which swarms come into play. Working with swarms and reflecting on this subject led to the concept of a multi-cellular robotic organism (MCRO), a confederation of robots that, like an organism’s various organs, isn’t a priori only swarm-driven but rather acts in a variety of configurations like organs interconnected via reciprocal feedback. 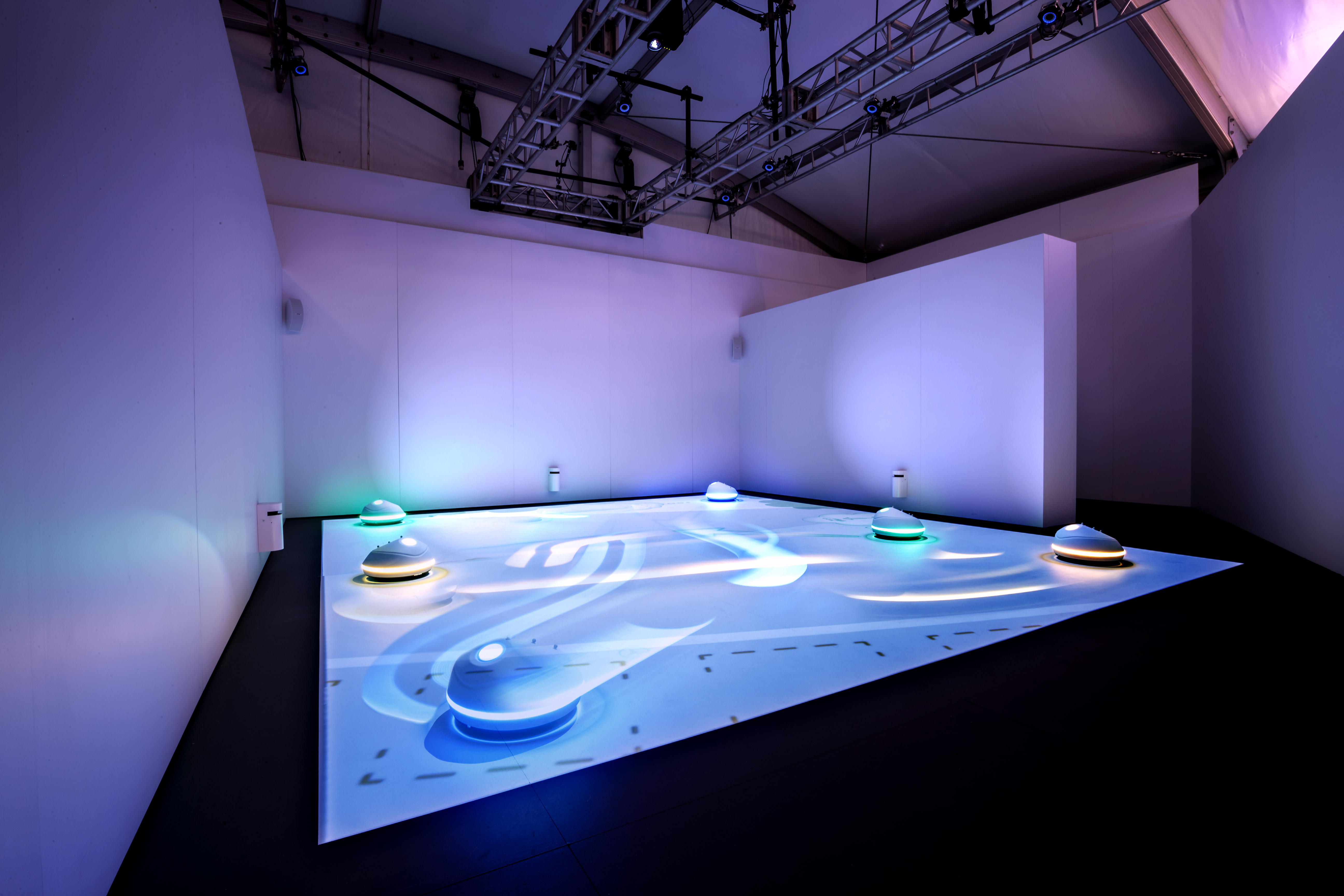 Ars Electronica isn’t the only organization giving consideration to the future of artistic swarms (in the broad sense of MCROs); quite the contrary. A lot of work is already being done on this idea’s implementation—or on its interpretation. What do these future systems mean for our society?

Personally, I’m also very much interested in the question of swarm intelligence, a subject about which there’s so much talk at present. Nevertheless, in light of the actual behavior of a growing segment of our society as these people engage in public communication (in advertising, social media and certain realms of political life too), it seems to me that a scholarly investigation of a phenomenon that could be termed swarm stupidity would be far more realistic.

Take autonomous driving as an example … will we have to cede responsibility?

Horst Hörtner: Will a necessary consequence of the increasing intelligence of our environment be that the individual human being must give up authority, responsibility or the ultimate power to make decisions? How will the society learn to live in an artificial environment, as we have lived in a natural environment for thousands of years now? In an environment that is more intelligent—or at least more “communicatively networked”—than humankind is? This is one of the questions that the Spaxels Research Initiative will confront. The challenge isn’t to recognize how the individual cell—i.e. the robot—functions, but rather what arises from the sum of the communicating entities. If we want to see the beach, we can’t keep on concentrating on the individual grains of sand.

“What interests us isn’t the grain of sand but the whole beach!” (Horst Hörtner, Senior Director des Ars Electronica Futurelab)

The beach can be said to have already accumulated here in the present—namely, in the form of the Internet of Things in which all sorts of devices are interconnected. In other words, we’re already at the beginning of what we want to discuss.

The Vergerät, an installation of Boris Petrovsky, demonstrates the idea of swarm in the guise of interconnected household articles. Credit: Boris Petrovsky

Of much greater interest, however, is the fact that an “artificial swarm” is constituted via robotics and robots’ mobility—self-driving or not, which is something I consider of secondary importance in the context of meaning of our society. And the focus of the machines is thereby shifted onto the public sphere, which was heretofore substantially reserved for human beings.

But in the near future, the public sphere could be crisscrossed by robots that have an agenda of their own. And those of us who encounter these robots in this public sphere will have to make an effort to recognize their agenda, the same way we try to figure out—perhaps by making eye contact—which way an approaching human pedestrian intends to go. The robots I have in mind here thus have to be “predictable”—people have to be able to “read” them—and thereby regard them as reliable. In any case, human beings have to (be able to) trust these robots before we actually permit them free access to the public sphere.

This applies to an even greater extent to MCROs, whose physical appearance is still completely undecided. The concept of the Internet of Things could provide a strong indication in this respect … MCROs constitute the Internet of Mobile Things and are thus interlinked with the IOT.

Intelligent mobile robots are in omnipresent communication and exchange with their (intelligent) environment, which is, not least of all, a superb setting for artistic encounters though, in any case, this is well worth posing timely, critical questions about in order to develop future prospects.

So then, what is the “beach” that is in the process of forming by means of the accumulation of swarm-capable robots—the grains of sand in this metaphor. The SRI will be established on September 10, 2017. 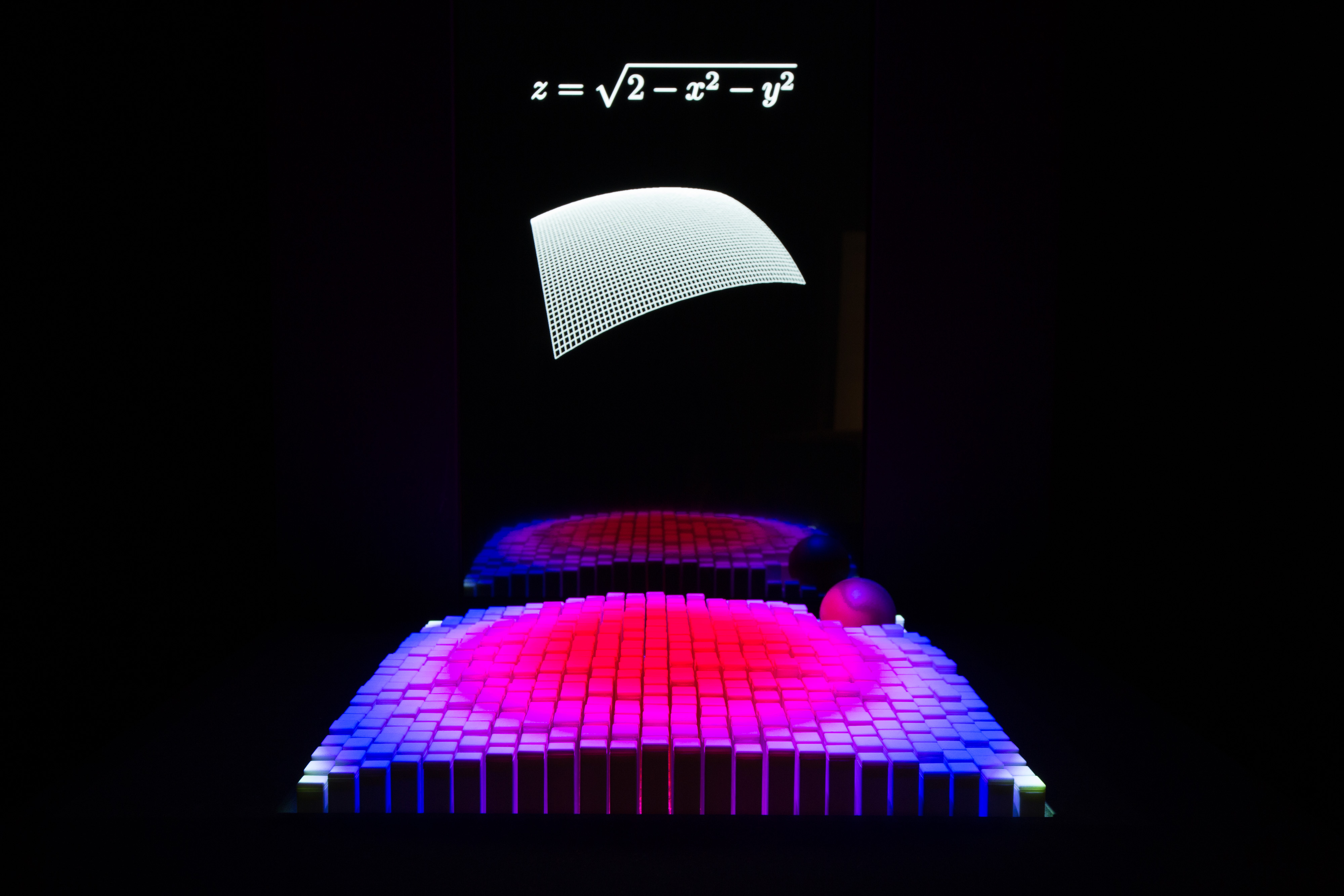 Then the assembled partners of SRI will provide initial insights into their activities in conjunction with this complex of issues.

Horst Hörtner: The SRI partners—each from their own respective point of view—will shed light on the future with respect to swarms. The interesting factor about this group is its diversity. NTT, as one of the largest Japanese telecommunications companies, focuses on the subject of swarm and communication. Audi’s interest is in the automobile in the form of a swarm. Autodesk, a multinational software enterprise active in architecture, engineering and entertainment, will offer insights into the making of things. And Hiroshi Ishii, co-director of the MIT Media Lab, will present his work in this context.

Thereafter, the SRI in this constellation will periodically convene for the purpose of exchange in order to go more deeply into the various issues that are of particular interest to the respective partners.

In the second part of this blog entry, the partners in the SRI will give information about their share.