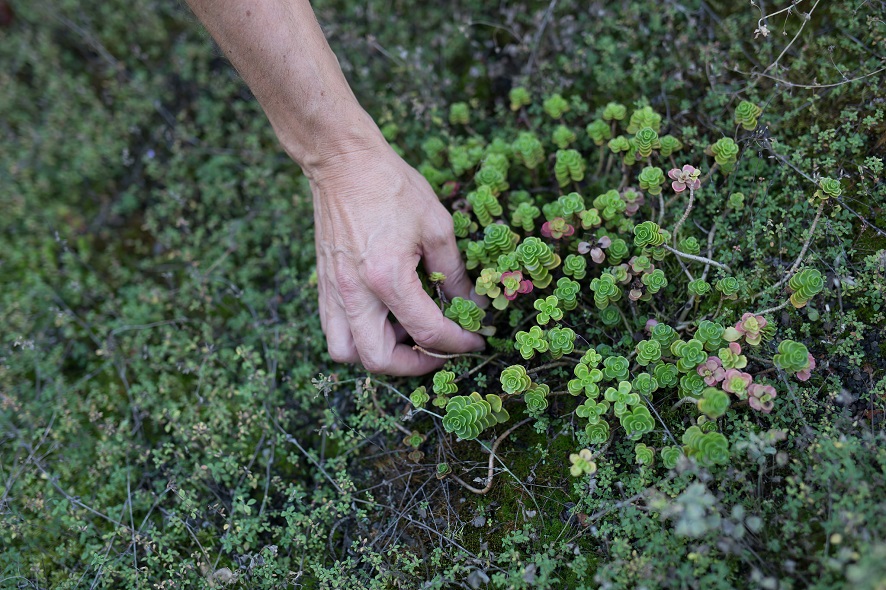 “May I also offer you a tour of the Botanical Garden?” asked Friedrich Schwarz, already heading towards the greenhouse before he’s even done proffering the invitation. In the frigid winter air, the glass structure’s frost-clouded panes make it hard to see what awaits us inside. Through the door and into the welcoming warmth, we’re suddenly confronted by a sea of cacti. The adjacent building shelters countless orchids. “My favorites” confesses Dr. Schwarz.

He’s director of Linz’s Botanical Garden and a real specialist when it comes to flora and fauna. And he loves to share what he knows with others who are interested in living things—for instance, on his guided tours of the lush rooftop of POSTCITY during the Ars Electronica Festival, and in Deep Space LIVE talks at the Ars Electronica Center. The next is entitled “Forest” and is set for April 19, 2018.

In our recent interview with Friedrich Schwarz, we asked him why he’s so interested in urban flora and fauna, and what we can expect at the next Deep Space LIVE. 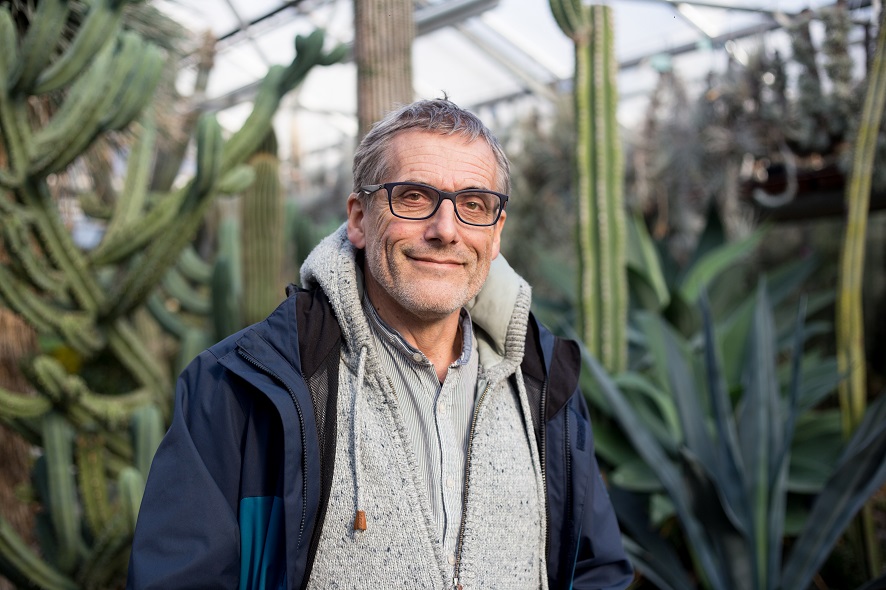 Your talks in Deep Space are all about urban flora and fauna in Linz. Why do you find this so fascinating?

Friedrich Schwarz: The flora and fauna within the Linz city limits are so interesting because there’s a lot here that you wouldn’t expect. Cities are actually very bio-diverse, which seems absurd at first but the specific habitats that exist in a city—the artificial cliffs of building structures and house façades, the green acres interspersed among them like lawns, courtyards and parks, the various forms of land use and the types of soils ranging from gravel and sand to humus, and the special climatic situations in cities—make them homes to an incredibly high density of species. In fact, many cities are even more bio-diverse than rural areas—especially those that are cultivated intensively or subjected to some other intensive usage. 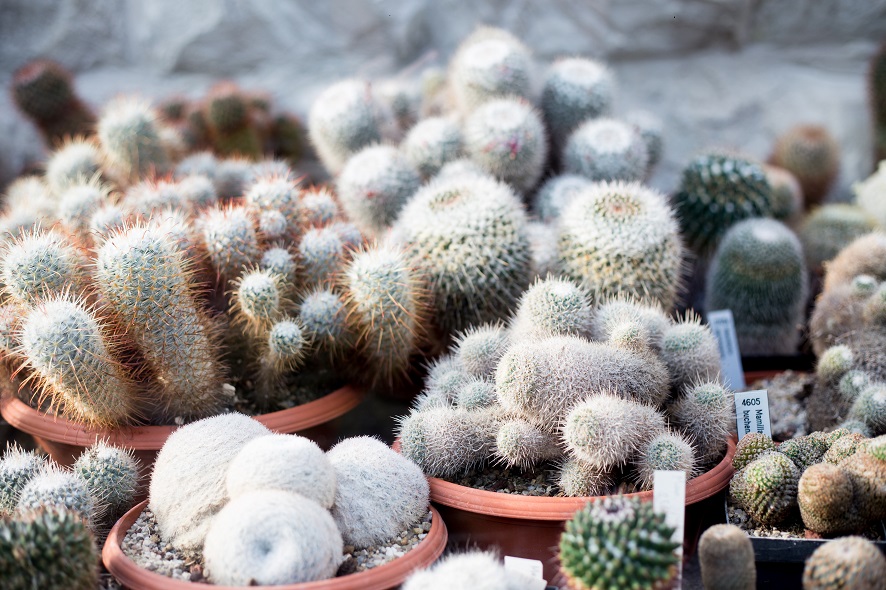 What are some examples of unexpected plants and animals found in this town?

Friedrich Schwarz: Linz offers a habitat to one of Austria’s rarest amphibian species, one that’s acutely threatened by extinction—the European green toad, which you can find in vacant lots and especially those where the soil has been compacted so that shallow depressions can collect rainwater, which then forms little ponds in which the toads live and spawn. They used to settle into temporary bodies of water that accumulated on gravel river banks after spring floods, but now that the Danube is regulated these ponds don’t form anymore, which is why these creatures have almost gone extinct. Their ersatz biotopes are cargo storage areas or gravel lots—like the ones used for parking trucks. Plus, we create artificial biotopes, since the proliferation of pavement and asphalt surfaces means fewer and fewer spots where these pools can form.

There are even interesting animals living right in downtown Linz. One is the common pipistrelle, which is not only Austria’s smallest bat; it’s our smallest mammal. They live in cracks and crevices in building façades, where they spend the day very well hidden, and fly and hunt at night. This bat is so tiny it fits into a matchbox. 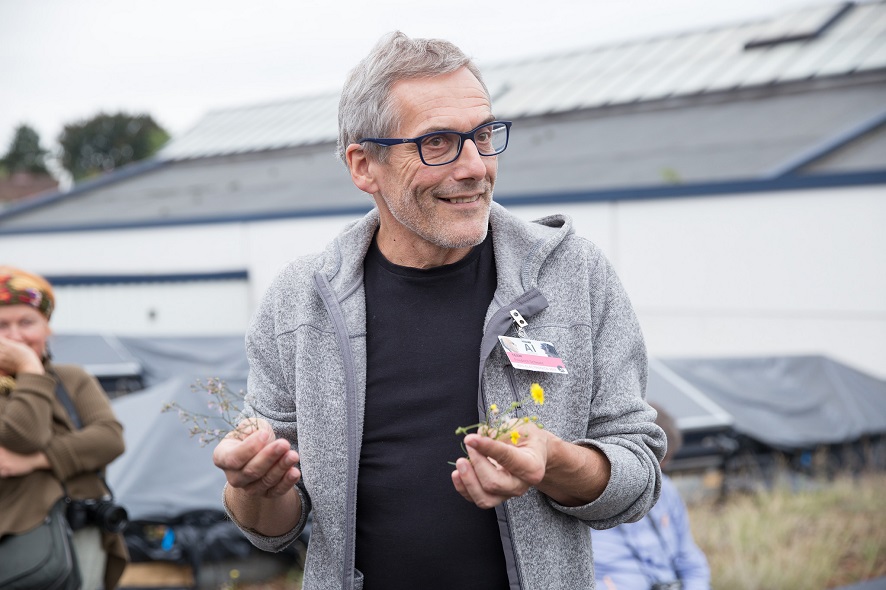 What are some of the surprising plants found in the city?

Friedrich Schwarz: There are remarkable plants that are often found right in the inner city. What are very interesting are the old walls of the castle—that is, the cracks in the walls, in which you find amazing plants such as cymbalaria muralis. This is a lovely flowering plant with tiny blue blossoms that grows in rock and wall crevices, where it spreads out like a veritable carpet. After the flowers bloom, when the seeds are ripe, the mother plant actively buries its seeds inside the cracks in the rock. A stalk grows into the crevice and sows the seed there; thus, it actively seeks out the right substrate for the seeds to germinate. But in doing so, it doesn’t grow towards the light, as a plant usually does; instead, it’s negatively phototropic, growing away from light.

Corydalis is another one that can be found growing out of the old walls around Linz Castle. This is a very cute plant that flowers beautifully. Ants gather its seeds, which have an appendage containing oil. The ants eat this oily, protein-rich appendage and then leave the seeds, or else drop them into cracks where they can germinate.

Cities aren’t only good habitats; they can also have a horrendous impact on the environment. In what ways do you notice the effects of climate change in big cities?

Friedrich Schwarz: There are manifestations that climate change is at work in big cities too or is evident in them—for example, that the proportion of thermophile [warmth-loving] plants and animals is increasing. This is an indication of warming. In cities, the average temperature is generally 2-3 degrees higher than in the surrounding region. This has to do with built structures—that is, with the heating of paved surfaces, roofs and buildings. Therefore, the proportion of thermophile species is generally higher in cities. If it gets a bit warmer in such places, then thermophile species can get established more readily in cities than in the countryside. 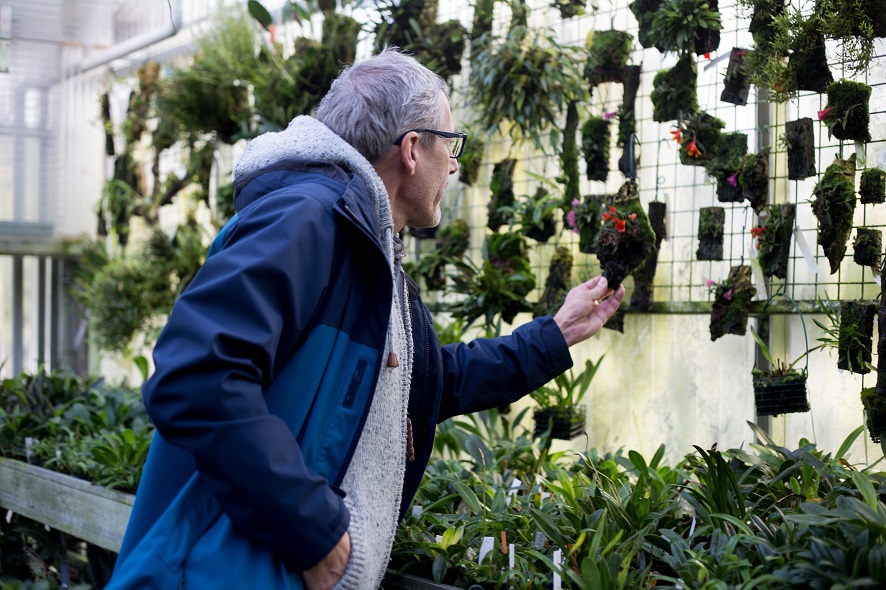 What’s your take on the extinction of insect species?

Friedrich Schwarz: Many insects depend on certain plants, which they live from, either from their nectar or by eating their leaves. If these plants or the structures on which these plants can live exist in cities, then insects can live in those cities as well. It isn’t the case that insects simply disappear despite finding the appropriate structures or habitats. Nevertheless, you also have to give nature a chance so that insects can live. Of course, cities can be hostile to life, no question about it. If everything is cleaned up, put away and sealed up tight, this is fatal for the flora and fauna. If this happens within normal dimensions, then the creation of suitable habitats often occurs automatically. Animals and plants can get established at precisely these locations.

Are measures being implemented here to nurture our flora and fauna?

Friedrich Schwarz: On land that’s the property of the City of Linz, we’ve taken steps in recent years to give Mother Nature a helping hand—for instance, nesting aid for birds, including birds and bats that nest on buildings. In cooperation with real estate developers, we’ve built several thousand nesting places for swifts into buildings in Linz. When properties are renovated, for example, we pay particular attention to providing nesting places for swifts. We’ve also done some things to benefit kestrels. In the larger municipal parking lots, we’ve planted wildflower meadows, or what were previously manicured lawns are now mowed only twice a year, which means that more species can get established there. And a lot of small things have been done—for example, setting aside an area in a park for a heap of branches where a hedgehog can find shelter and spend the winter. 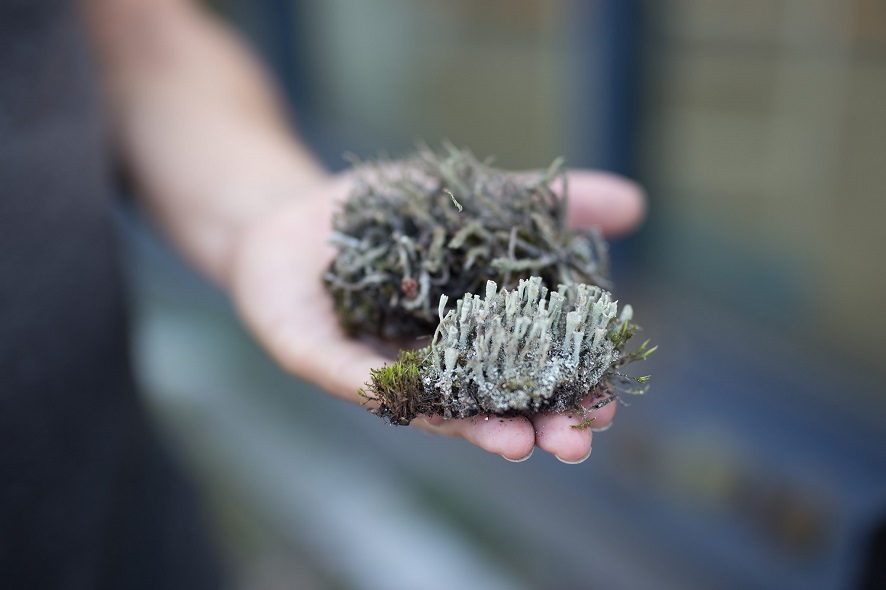 Can measures be taken to combat rising temperatures?

Friedrich Schwarz: In selecting plants to be planted in this city—especially when it comes to shrubs, hedges and trees—you have to take care to plant varieties that will be able to survive. Ideally, these are plants that can withstand drought and heat waves. Here, it’s definitely necessary to try out some new approaches. Thus, cities are now proving grounds for future developments, particularly when it comes to climate change. So, you can do things like testing new varieties of trees since the conditions now prevailing in cities are how things will be developing generally.

For example, the City of Linz is doing a lot to encourage planting vegetation atop buildings. So, Linz is setting a great example with green roofs, which you can’t see from the street, of course, but it shows up clearly on aerial photographs. This makes sense because greenery is always a valuable asset. Every square meter covered with vegetation has a positive effect on the microclimate, species diversity and air quality. Every green leaf has an air hygiene aspect, as evaporation promotes air circulation and particulate matter is filtered out of the air. Trees are the best filters, but every patch of greenery yields this effect, which has a highly positive impact on air quality. 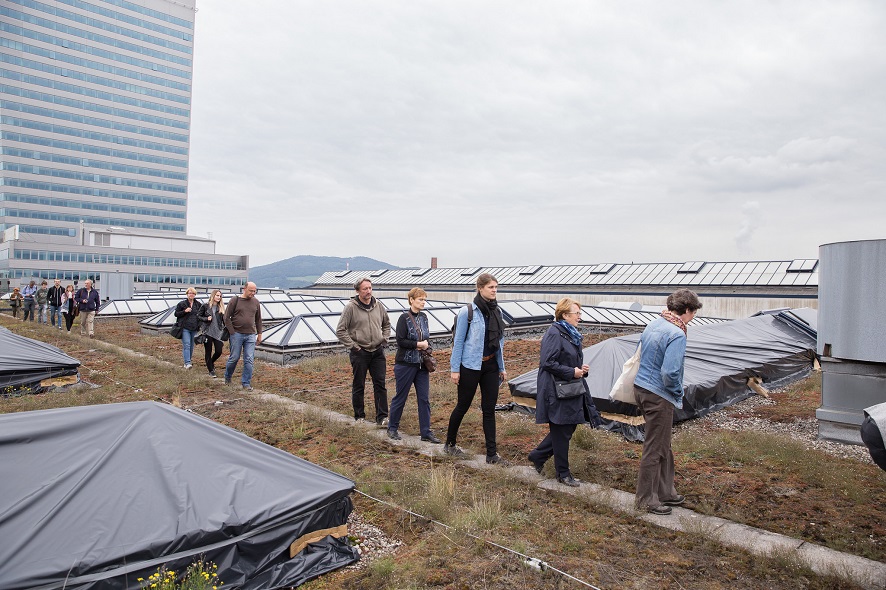 At the Ars Electronica Festival in recent years, you’ve taken tour groups up to the roof of POSTCITY to show how diverse this greenery can be. What’s so fascinating up there?

Friedrich Schwarz: The roof of POSTCITY is absolutely amazing. The first time I was up there, I could hardly believe my eyes. Fantastic! The vegetation includes not only plants that you generally find on green roofs, but also an incredible assortment of lichens. I sure didn’t expect that. There are snow lichens that shouldn’t even exist at a location like this because they’re so sensitive to air pollution. I mean, I would never have assumed that the air quality could be so good right next to the train station on a very busy street, Waldeggstraße, which feeds into the expressway; otherwise, these lichens wouldn’t occur. But they do—in numerous varieties, and many examples of each variety. There are even drought-tolerant mosses that you wouldn’t think would be able to thrive or even occur in a habitat like this. POSTCITY’s roof is gorgeous; it’s incredible, visually very appealing. 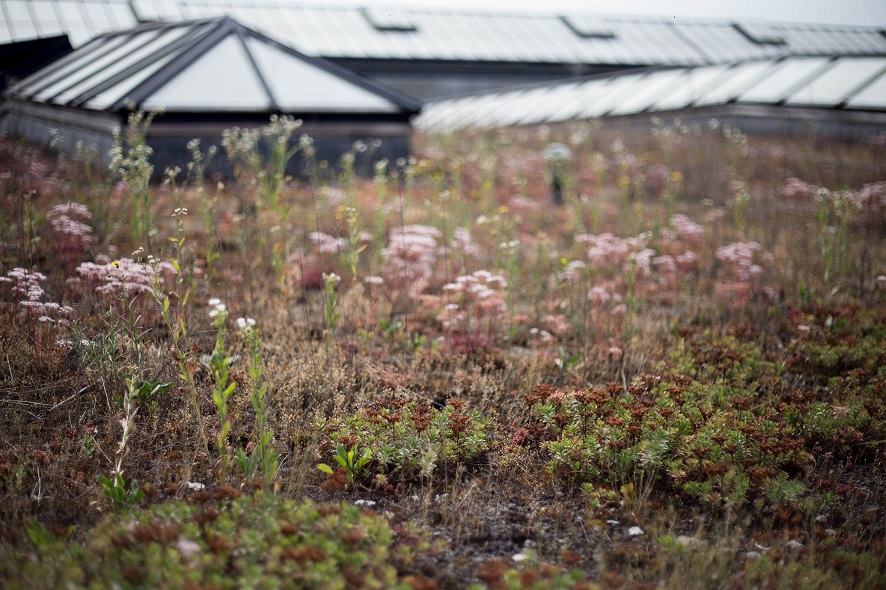 In between Ars Electronica Festivals, people who’d like to enjoy your accounts of Linz’s flora and fauna can attend your Deep Space LIVE talks at the Ars Electronica Center. The next one is all about the forest. So, what can we look forward to?

Friedrich Schwarz: I’ve decided to give an overview of our forests’ diversity. Some folks might think woods are woods, the same wherever you go. But I’d like to give an overview of all the different types of forests, what their characteristics are, and the differences among them. And I’ll be focusing on forests found in the immediate vicinity here or that occur in the region of Upper Austria. In fact, the subject of my doctoral dissertation was the forest, so my academic background is in forest ecology, which is a very interesting field. And I love spending time in forests because I find them so fascinating.

Friedrich Schwarz is director of Linz’s Botanical Garden. He occasionally gives talks on urban flora and fauna in conjunction with the Ars Electronica Center’s Deep Space LIVE series, and has offered fascinating, botanical-themed guided tours at the Ars Electronica Festival in recent years.

The next Deep Space LIVE with Friedrich Schwarz is set for April 19, 2018. Details are available here.