Bellingcat: Looking for Traces in the Digital Environment 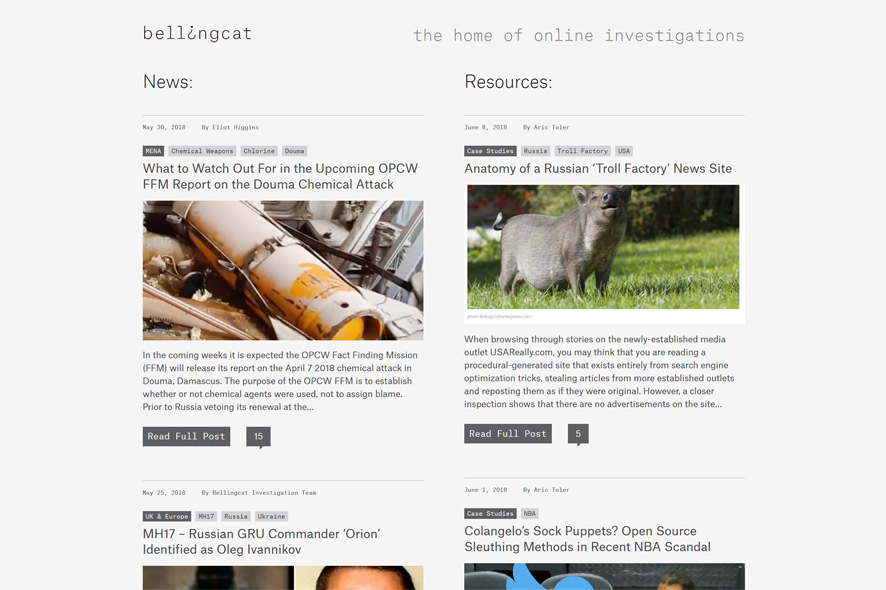 It is not only reserved for journalists to research and check facts on the Internet. With its case studies and guides, Bellingcat offers support for all those who are active citizen journalists and want to research facts and evidence on the Internet with the help of freely accessible tools. Bellingcat was recently awarded the Golden Nica in the Digital Communities category of the 2018 Prix Ars Electronica for this joint search for clues. We spoke to Eliot Higgins, the founder of Bellingcat, about the project.

What was the first study conducted on Bellingcat and what was the result?

In times of fake news, the joint analysis of digital sources such as open source or social media is a promising tool. But how does Bellingcat deal with errors?

Bellingcat also offers guides on how to participate in the investigation. Can you give us a few examples of these tools?

Eliot Higgins: The main tools people don’t even really think of as tools are search engines, in particular Google which gives any user access to vast amounts of information. Even knowing some simple search techniques, like setting date ranges or search for things in quotes can make someone a more effective user. It’s fair to say a lot of Google owned platforms have made open source investigation the field it is today. YouTube provides vast amounts of video footage from across the world, Google Earth provides satellite imagery of the entire world, Google Street View provides reference images to use in confirming the location images were captured. These are user friendly tools available to anyone with an internet connection, and are key tools in the open source investigators toolkit.

When we’re training people we tell them they need to think of themselves as having an investigative toolkit, not just one or two tools that can do everything they need. Investigators learn to examine a problem, then using their experience of previous investigations establish the tools and methodologies most likely to get the results they’re looking for. Through experience you learn more about the tools, and what tools there are. For example, learning that Google Street View has historical imagery, that Yandex Maps has its own version of Street View style imagery, that you can find historical satellite images on Google Earth, and that Terraserver has even more historical satellite imagery that’s often more up to date.

“My advice for anyone who wants to start doing these investigations is just give it a shot, the process of investigating something will be in itself a learning experience, and it doesn’t have to be big.”

Geolocate a single video, then write up how you did it on a blog. You don’t have to point anyone to it, but the process of investigating and then explaining it in a way that’s clear, concise, and well sourced is a learning experience that can lead to bigger things. 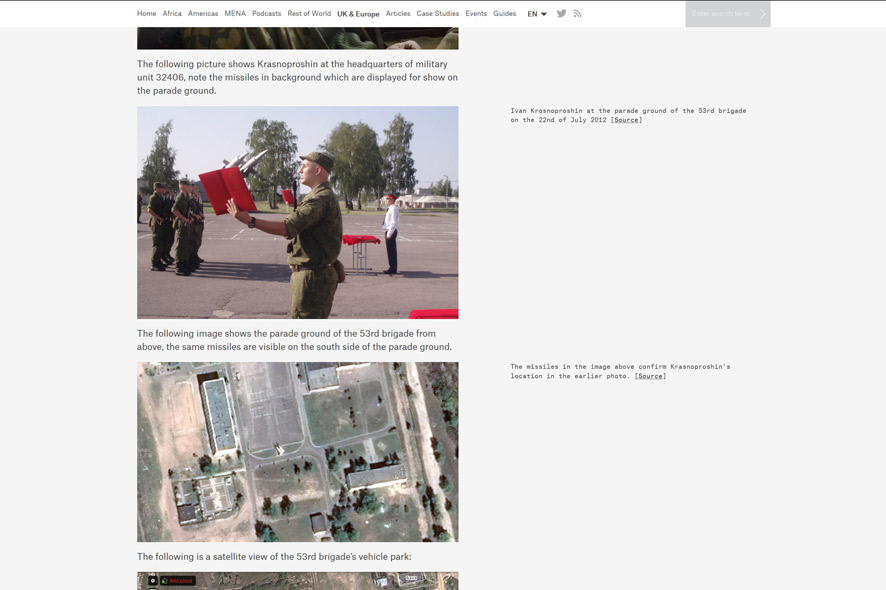 Especially when it comes to issues where people have been killed or where possible financial interests of big players are involved – isn’t it a big barrier to deal with this and perhaps endanger one’s own person or even one’s own family?

Eliot Higgins: Russia has been very proactive about attacking Bellingcat and myself through the media and via cyber-attacks. Recently the Russian Foreign Ministry and Russian Ministry of Defence have repeatedly claimed we’re using fabricated evidence without presenting any actual evidence to support their claim, even when I’ve asked them repeatedly to do so, and various accusations are made about Bellingcat by pro-Russian and Russian state funded media. We’ve had dozens, if not hundreds, of attempts to access our email accounts, and had our website hacked by the Russian state backed Cyber Berkut. If we were based in Russia I’m sure we’d be harassed, threatened, and abused as many journalists in Russia are if they are critical of the government, but we are fortunate not to find ourselves in those circumstances. This is what happens when you stand up to bullies and criminals.

As a journalist you have been searching for the truth for many years. What did you learn in your research – do we always have to assume the worst case and collect the facts from that?

“One thing I’ve learnt is we’ve been pretty bad at making the most out of the information that’s out there. “

Eliot Higgins: What used to surprise me is how many times I’d reach out to someone in Syria I’d found on Facebook or Twitter who was at the site of an incident I was writing about, often very major incidents that were getting international attention, and I’d be the first, and often only, person to reach out to them. This was great for me, as I’d get unique information and material, but pretty bad for the public understanding of events in the conflict as I couldn’t look at every single noteworthy event by myself.

Leading on from that, it’s also pretty alarming how much goes unreported and unnoticed even when there’s a lot of information available about it. While most people would have heard about the April 4th 2017 Khan Sheikhoun Sarin attack, hardly anyone has heard about the March 30th 2017 Sarin attack that took place in nearby Al-Lataminah. Part of that is because of the comparatively low number of causalities, but it was the same type of chemical bomb and same type of Sarin as used in the April 4th attack, but no-one heard about it. It wasn’t even because it wasn’t big enough news, it didn’t even make it to the news because it was lost among the mass of claims coming from Syria. Most people would probably say there’s been several chemical attacks in Syria, but in reality the number is closer to 200 or 300, but because only a tiny fraction result in mass causalities they go unreported, creating a false impression of how chemical weapons are used in Syria, which in itself leads to conspiracies about the large scale attacks.

Since the beginning of photography, photos have been manipulated, but AI has made it easier and easier to change videos. How can we be better prepared for the future of this strongly visual world?

Eliot Higgins: An image does not exist as just an object floating in a digital void, but both within the image, and where we find that image, there’s a vast number of pieces of information that connects it to other pieces of information, creating a vast network of interconnected information objects. When an event occurs it creates echoes and ripples in this digital environment as new information is created, and what we’re doing is exploring this environment, looking for these echoes and ripples. A Buk missile launcher is transported through Eastern Ukraine on July 17th 2014, photographs and videos are taken, people discuss it on social media, a passing satellite captures an image of it being transported. We find a photograph of the missile launcher, we see there’s a shop in background, we find the address of the shop by discovering a court document online about a fight that happened in the shop, that leads us the exact location and dashboard camera footage filmed by a local and posted to YouTube showing the same location, allowing us to confirm the precise location the image was captured.

Now, that does not address enough issue, that people share stuff without checking whether or not its true, or even caring, so while we’re exploring these echoes and ripples nonsense can be bouncing around the internet at great speed. Should we become more cynical, should we stop sharing stuff, should we log off? It seems more likely people will keep sharing rubbish, but we can at least try to make sure there’s more people doing serious investigation.

Note: The Prix Forums of the 2018 Ars Electronica Festival, which will be held in Linz from September 6 to 10, 2018, will once again be devoted to the winners of the Prix Ars Electronica of this year. Meet the people behind the projects and learn more about their work! 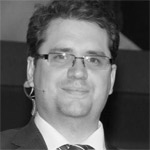 Eliot Higgins is an award winning investigative journalist, and founder of the Brown Moses Blog and Bellingcat. He publishes the work of an international alliance of fellow investigators using freely available online information. He has helped inaugurate open-source and social media investigations by trawling through vast amounts of data uploaded constantly on to the web and social media sites. His inquiries have revealed extraordinary findings on subjects such as the downing of flight MH17 in Ukraine and use of chemical weapons in Syria. He is currently a visiting research associate at the Centre for Science and Security Studies (CSSS) at the Department of War Studies at King’s College London and visiting research fellow at UC Berkeley’s Human Rights Center. In addition to his academic work he is also a nonresident senior fellow at the Atlantic Council’s Future Europe Initiative, where he has produced major report investigating Russia’s involvement in the conflicts in Syria and Ukraine drawing on open source investigation.