Swarm Control: The Future of Firefighting 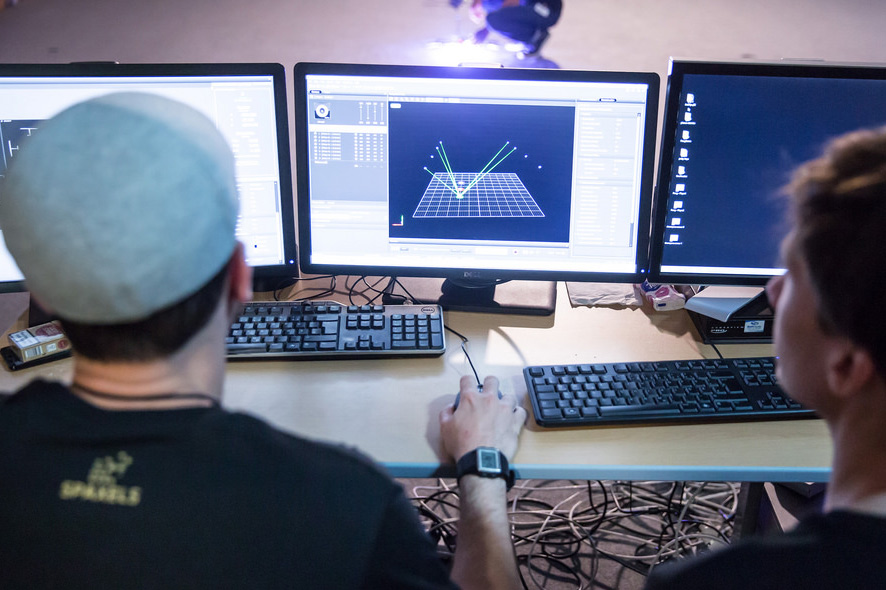 With the Concept Fire Truck, which can be seen in POSTCITY at the Ars Electronica Festival 2018, Rosenbauer is underscoring its worldwide technological leadership in the field of fire-fighting equipment – and is also taking the next step. The focus will be on swarm controls and autonomous vehicles – a central research field of the Ars Electronica Futurelab and reason enough for the two companies to come closer together.

With spectacular shows and an entry in the Guinness Book of Records—the world’s largest autonomous swarm of drones launched in cooperation with Intel in November 2015—the Futurelab has made a name for itself worldwide. The Linz-based lab-atelier developed an operating system to coordinate the movements of self-driving vehicles (SwarmOS), which international corporations such as Japanese telecommunications giant NTT is using as a development platform in its R&D departments, and will now serve as the basis for collaboration with Rosenbauer. The emphasis is on how autonomous swarms might possibly be employed by first responders, as Dipl.-Ing. Michael Friedmann (Head of Strategy, Innovation and Marketing Rosenbauer) and Horst Hörtner (Head of Ars Electronica Futurelab) discuss in this interview:

Rosenbauer and Ars Electronica Futurelab are now conducting research into the control of swarms of autonomous vehicles. Where do you see your similarities?

Michael Friedmann: The common ground is certainly the fascination of trying everything out. Rosenbauer has demonstrated an enormous pioneering spirit for over 152 years. We have continually developed new innovations – from the high-pressure extinguishing process to the “Rosenbauer Panther”, a large airport fire-fighting vehicle, and the new firefighting helmet. In the meantime, there are hardly any new developments without digital applications – digital solutions can be found in all new technologies. The aim is to try out something new, to gain experience and to distil out what can provide support in the future. And that’s exactly what we find at the Ars Electronica Futurelab, too, in terms of trying things out and playing with them. The fact that you can take the playful seriously is actually the exciting point for us. What can you take out of it and bring into a system that protects or saves human lives?

Horst Hörtner: It’s always incredibly exciting to break new ground with a creative and innovative development partner that you don’t yet know where it will lead you. The cooperation is based on our Swarm OS. A development that began with our Spaxels, the drones equipped with LEDs that conjure up glowing figures in swarms into the night sky. Now Rosenbauer is trying to test the Swarm OS according to all the requirements and gain experience with it. The crux of the matter is that the Swarm OS is no longer just about entertainment and art. Through our partnership with Rosenbauer, the application range of this system can be sensibly extended to a completely different area. This is extremely exciting. An extension of our development of swarm technology over the past six years!

“The Rosenbauer team and the Ars Electronica Futurelab team are incredibly passionate about dealing with issues here. That’s more than engineering.”

So the possibilities of SwarmOS can also be used in the vehicle construction of fire brigades?

Michael Friedmann: For us, the knowledge that Ars Electronica Futurelab can control swarms of drones was a missing link. We are well aware that in the future we may not only be using individual drones in swarms, but also drones – for example, in the search for missing persons. It was only through joint experimentation that we discovered that with Swarm OS we have the possibility of linking the vehicles – which could be drones or other vehicles – with our EMEREC mission management system.

Michael Friedmann: EMEREC is a mission management system that accesses vehicle telemetry data on the one hand and cloud-based data and systems on the other. For the telemetry data, Rosenbauer has its own system called “service4fire”, which first takes over the vehicle data and then intelligently interprets it. With “service4fire” you know where the vehicle is and how the vehicle is doing, what the water level is, what the fuel level is. And if the vehicle reports an error, this information is not only sent to the commander on the smartphone, but can also be shared with the users and firefighters, i.e. everyone can access this information in real time on tablets and smartphones, including the control centre remote from the scene. With one or two vehicles this might not be necessary, but with a major incident involving 50 different fire brigades and a total of 200 vehicles it is good to know which vehicle is still fully operational.

So it’s about linking all the available data?

Michael Friedmann: Yes, that’s exactly what linking the telematics systems of every vehicle in use is all about. And on top of that, there are an insanely large number of tools such as access to the cloud to chemical databases, to vehicle databases – where is the best place to start in the event of an accident with rescue equipment, where is the fuel tank installed, what else do you have to watch out for? In addition, the fire brigade can integrate important data from buildings or the affected infrastructure. Where are the hydrants, what are the building plans for the school, hospital or museum? The entire operational management is taking on a new dimension. In the future, we not only want to dock our vehicles there, but also assistance systems and vehicles such as the caterpillar manipulator, the drone or an entire swarm of drones. We want real-time access to the sensors and payload of the drone, or to a robot arm or detector on the caterpillar manipulator.

Horst Hörtner: And this is exactly where the Ars Electronica Futurelab docks. Our “Swarm OS” has an open API interface with which the software can communicate directly with the EMEREC system. The EMEREC system can thus continue to concentrate on its application goals, but the drones fly autonomously. When we first explored the possibilities of this interface together, an explosion of innumerable ideas occurred.

What happens after getting to know the systems for the first time?

Michael Friedmann: Of course, we still have to try it out, integrate initial ideas into prototypes. Does it work or do you have to adapt it? If it works, then you can venture further out experimentally. We take up the possibilities of Swarm OS and try to integrate it into our system.

Horst Hörtner: The next step is certainly to see how to get the connection to the EMEREC. The development of EMEREC will remain entirely with Rosenbauer and Swarm OS will continue to be localized at the Ars Electronica Futurelab. It is important to see how stable the interface between the two systems is. Hundreds of thousands of ideas have emerged so far. All this has to be sorted and brought to the ground.

In which areas could SwarmOS be used in fire brigades?

Michael Friedmann: The applications of these ideas are certainly the search for missing persons, detection and sensor technology, simply classic applications where we can already use drones. This ranges from very small drones, which are used for reconnaissance, to medium-sized drones with a certain payload and camera systems or lighting options, to heavy-duty drones, which might even be able to fly extinguishing missions.

“But what we already see today, when we make future studies with young creatives, there is absolute agreement on the question of what the fire brigade world will look like in 20 years: this world will become autonomous. In the minds of these young creatives, designers and developers, everything moves unmanned. Human beings remain in their most important and decisive role – they are controlling and they are above all creative.”

If you would like to know more about swarm control and its fields of application, we recommend a visit to the presentation of the “Spaxels Research Initiative” during the Ars Electronica Festival 2018 at POSTCITY Linz, Saturday, September 8, 2018, 4 PM – 6:30 PM. Read more at ars.electronica.art/error/spaxels-research