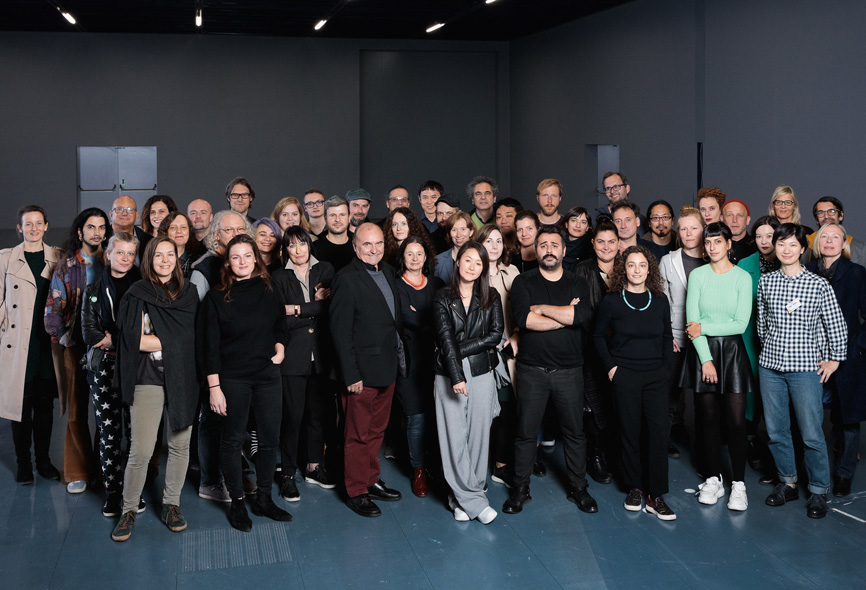 When the days get longer again and spring is showing its best side, it’s time for international experts to gather in Linz to select the winners of the Prix Ars Electronica. From April 11 to 14, 2019, the jurors selected the best works from the thousands of entries in the four categories – “Artificial Intelligence & Life Art,” “Digital Musics & Sound Art,” “Computer Animation,” and “u19 – CREATE YOUR WORLD” – in a laborious discussion process. On May 22, 2019, we will present the winning projects at ars.electronica.art/prix – selected award-winning media artworks will then be on show at the CyberArts exhibition of the Ars Electronica Festival (from September 5 to 9, 2019) in Linz.

From cyborgs to school principals

April 11, 2019, Thursday night. The sensors of the Ars Electronica Center recognize the slowly entering darkness, the building begins to glow in bright colors. Media artists meet DJs and filmmakers, curators, scientists, professors, cyborgs and school directors from countries such as Turkey, Belgium, Denmark, the USA, Japan and Austria. Many of the jurors already know each other, some are new to the role and slip into it for the first time. The Sky Loft of the Ars Electronica Center is filling up, the mood is excellent – and that despite the fact that a lot of work is imminent. The jurors have until Sunday to agree on a Golden Nica in each of the four categories and then travel on to their next assignments.

Friday, 9:00 AM. The four juries have retreated to four rooms of the Ars Electronica Center, which can only be opened with the correct admission card. The database, which has been filled with submissions since the beginning of the year, will now become the essential tool of the coming days. Round after round, decision after decision, one yes, one no, two yes, and one more – one round more. The first task is to sort the large number of submissions according to quality and thereby reduce them. The jurors who have been invited by Ars Electronica will join forces in the search for the pearls of media art – it’s they who choose the winners, Ars Electronica takes care of the organization.

The jurors of the newly introduced category “Artificial Intelligence & Life Art”, which in a way has extended the previous category “Hybrid Art”, have another task to fulfil this year – in addition to judging the submitted works. They are the ones who lay the foundation stone for this category for the coming years and juries. And connected with this are also fundamental discussions about what is meant by intelligence and what life means – two essential terms of this category.

Roughly speaking, the submissions are divided into biological “wetware”, traditional hybrid bio-art works, and silicon-based computer intelligence with works around artificial intelligence – whereby the term here also ranges from philosophy to neuroscience to biology and interweaves itself again and again with politics when it comes to privacy, surveillance or collecting data. How do the two areas, “Artificial Intelligence” and “Life Art” fit together? And should the Golden Nica represent one area of it or should it span both fields? The jurors approached this evaluation with different expectations and agreed on a common evaluation. We are curious!

The jury of the Digital Musics & Sound Art category has to deal with a varied mix of submissions. Even though the jurors have a hard time finding real trends this year, there are some noticeable features. In 2019, fewer interactive works were submitted. This time it’s much more about works of art that deal with converting data into sounds. Other artists develop and build new instruments. According to the first statements of the jury, works that relate to the current socio-political climate were missing – and unfortunately there are far too few submissions from women in this category. With the increasing influence of artificial intelligence, it is also necessary that the evaluation criteria of these projects also adapt to new developments – a discussion arises in the jury that generally questions how important the input of sound is to be evaluated, or whether it is actually about the output generated by humans or machines. And what does innovation mean, especially in the field of Digital Musics & Sound Art? The jury’s common denominator follows the many fundamental questions: the Golden Nica.

Inside and outside of screens: Computer Animations

The time in which computer animations only move in screens is long gone – at the latest by the first round of submitted animations it becomes clear that they can be played on buildings just as well as in virtual reality glasses. VR is an area that has become one dimension larger again in 2019, mainly thanks to the ever-increasing availability of VR glasses. Nevertheless, among the numerous submissions in a wide variety of formats there are always animations that make do with long-established techniques such as stop motion. Animation is versatile, as you can see again and again on this Prix jury weekend. But the more the boundaries of animation open up, the more difficult it becomes to find them. What else belongs in the category and what doesn’t? And should the Golden Nica be awarded to unknown artists or can the prize also go to large animation studios? Questions also arise in this jury that have to be clarified before the winners are chosen.

The Young Generation: u19 – CREATE YOUR WORLD

Children and young people who take part in the Prix Ars Electronica are no longer in the starting blocks, but have long since joined the big teams. Be it the under-14s, the young creatives, or the 14-19s, the young professionals, as they are called in “u19 – CREATE YOUR WORLD”. They grew up with the new media, which they naturally use as a tool to express themselves, to critically question and point out topics, or simply to have fun. Especially the Fridays for Future Movement and the numerous environmental topics addressed are trends that are strongly reflected in the submissions in 2019. The young generation takes to heart the topic that most concerns them: their own future.

Sunday afternoon, April 14, 2019. It’s indeed done again, even though it has become more difficult from hour to hour to agree on a Golden Nica award winner – there are many very good media art works out there that need to be honored. Fortunately, the jury can also give honorary mentions and recognitions – a small consolation that runs through all the juries. On May 22, 2019, the time will come. On this day, we will be announcing the winners of the 2019 Prix Ars Electronica, who will then be presented at the CyberArts exhibition at the Ars Electronica Festival from September 5 to 9, 2019, and will then also receive their personal Golden Nica at a ceremony.