”Humans can determine their own evolution” 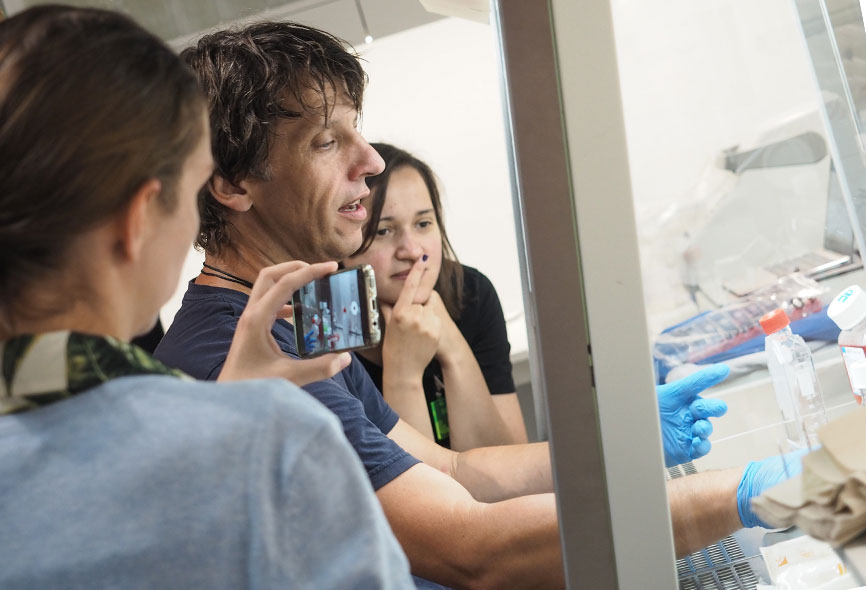 With the redesign of the Ars Electronica Center, we have also adapted the BioLab, which is part of the new Ars Electronica Labs, to the current state of research. A lot has changed in recent years in the field of molecular biology – not least with the CRISPR/Cas9 gene scissors, which can be used to selectively insert, remove or switch off genes.

Dr. Manuel Selg, molecular biologist and head of the Department of Chemistry and Biology at the FH OÖ Campus Wels, has already played an important role in the conception of the first BioLab of the Ars Electronica Center in 2009. Now, ten years later, he is again intensively involved in the design of the BioLab, which, as a laboratory in the middle of the museum, fulfills all the official requirements of a “real” laboratory and brings visitors closer to the new topics.

At the theme weekend “Optimizing our Body – Are Cyborgs the better Humans?” at the new Ars Electronica Center, Dr. Manuel Selg will introduce the world of molecular biology in two lectures: “Deep Space LIVE: Optimizing our Body” on THU June 27, 2019, 7 PM, and “CRISPR – The production of genetically modified organisms” on SUN June 30, 2019, 3 PM (both in German language).

The first BioLab at the Ars Electronica Center opened in 2009, and the second version now follows in 2019. What has happened technologically in the field of molecular biology over the past ten years?

Manuel Selg: My scientific curriculum vitae clearly shows that a lot has happened here. I am one of the last humans on this earth to receive my doctorate with a project where I cloned another gene. Nobody does that anymore. The DNA sequences of humans are known. I still sequenced it independently with apparatuses I built myself in the beginning. At that time we were able to read 200 nucleotides. The entire human genome has 3.2 billion – it would take decades to do something like that.

And then the technology came in. It became clear to me relatively early on that this could only be achieved through interdisciplinarity. I never cared about what the computer did to get a sequence of letters like A-C-C-G-T-A-A out of it. I have always taken care of the scientific part – what do I have to do to get the DNA? How does it have to be prepared in order to get good sequences? And what do these sequences mean? I have always regarded that as my part, computer scientists supplied the others – and right from the start you had to talk about what we expected from them.

Nowadays, the biologist has ready-made applications for sequencing DNA available to her or him from the field of computer science. In the meantime, companies are also doing this because it is cheaper than doing it themselves. This works as if I would use Microsoft Word for writing.

The demands placed on molecular biologists have therefore also changed…

Manuel Selg: That’s right. Basically the computer makes it possible to work with an innumerable number of data. This was always very difficult in the beginning – so we had to assemble the first DNA sequences with text processing software at the beginning. The output has also become much more. Of course, it has already been a conversion. In the beginning, the biologists were the ones who were more or less able to carry out projects in the laboratory on their own. You worked with partners, but they were biologists. This has already changed a lot through the cooperation with computer scientists and physicists who take care of certain devices such as lasers. Interdisciplinarity has had to increase considerably. For everyone this was a rethink, for today’s graduates interdisciplinarity is a matter of course.

What new topics is the BioLab at the Ars Electronica Center addressing?

Manuel Selg: Ten years ago, the task of a laboratory within a museum was quite different from what it is today: to show how such things are actually done. Visitors read that a piece of DNA can be multiplied billions of times within half an hour. And it was really important to show how this works because many technologies were still relatively unknown or poorly communicated.

The “how” has been somewhat omitted with the discovery of the CRISPR/Cas9 tool. The big question now is: do we want that? Of course you can do a lot with this tool now. In the fall of 2018, there was news of the twin babies from China who were genetically modified with CRISPR/Cas9 so that they could no longer be infected with HIV. And this is now the point where society has to consider: We have the technologies that are extremely strong and that can intervene in processes where we never thought we could make a difference.

“In this way humans can determine their own evolution! No other living being can do that. But as a society we have to consider whether we want to do this. These are now also the topics that are taken up in the BioLab.”

Another topic dealt with in the BioLab is organoids – artificially cultivated organ structures where processes can be better observed. You no longer need experimental animals, the ethical question also recedes into the background because you can do it with cell lines, and especially for diseases such as Parkinson’s, Alzheimer’s or epilepsy, you can look at things much more closely and easily. Of course, it must be clear that this is still an experimental system – translating it into the real biological situation is another task. The organoids will come very strong!

What is special about CRISPR/Cas9?

Manuel Selg: CRISPR/Cas9 was not ultimately invented by humans. Bacteria have been practicing this miracle technology for millions of years. The bottom line is that it is a system that bacteria have to protect themselves from other biological invaders.

Just as our human cells are infected by viruses, bacteria are infected by phages. They can also damage the bacteria. And this CRISPR/Cas9 is a system with which they can protect themselves, once they have been infected. And that is what happens in the end: That information is taken from the intruder and inserted into a kind of DNA database of the organism. With this CRISPR/Cas9 scissor mechanism, when a foreign DNA enters the bacterium, this database is used to check whether it has been there before. And if it has already been there, then the “scissors” come and snip it off.

Obviously, this mechanism can read DNA and find certain places and when these are there, it can cut there. And this has also been implemented for plant and animal cells, so that it is possible to cut at specific locations and break them. This also makes it possible to modify a genome – we cut and place something specifically there. Of course, there are still restrictions – e.g. on the size that can be used here. But that will also change over the years. We have to think about whether we really want that.

Dr. Manuel Selg is Professor of Molecular Biology and Head of the Department of Chemistry and Biology at the FH OÖ Campus Wels. He was instrumental in setting up the first BioLab at the Ars Electronica Center, took on the scientific direction of the Project Genesis exhibition, and was heavily involved in the development of the new BioLab at Ars Electronica Labs.